In Sorrentino’s La Grande Bellezza, Rome, experienced in a decadent and sinful way, is not a backdrop but the protagonist in Jep’s life. Rome (and Proust) are the cause of empty depression. A lot of Sorrentino’s Rome is a version of the city that no tourist will ever explore, though in some ways it is possible to walk in the footsteps of Sorrentino and other great Italian directors to explore how Rome has influenced them. Test your memory by this virtual visit of some famous film locations in Rome, or take the new thematic walk on the city’s film history, Director’s Cut: A Journey through Italian Cinema, offered by Context Travel. 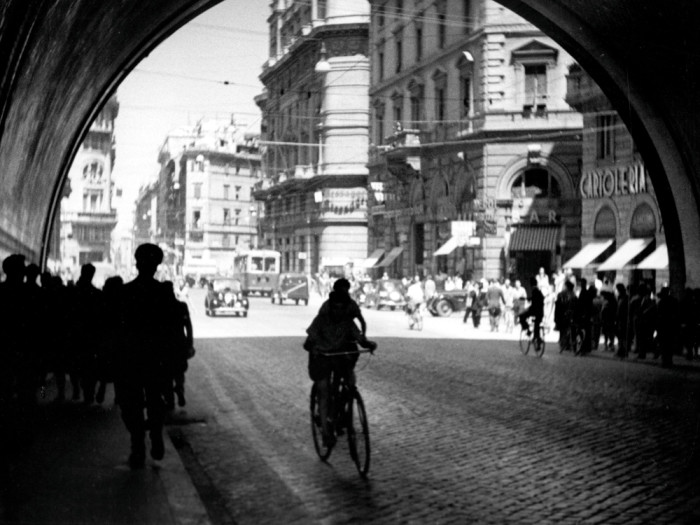 Vittorio De Sica’s masterpiece of Italian Neorealism, Bicycle Thieves (1948) is about a poor father and son’s search for a stolen bicycle that is essential to the father’s job. The scene in which Antonio’s bicycle is stolen was filmed on the corner between Via Francesco Crispi and via Capo le Case. The late 16th-century church of S.Giuseppe a Capo le Case is a recognizable landmark. The action proceeds in via del Traforo, an area that has changed dramatically with the post-war reconstruction.

Via Veneto today is lined with Italian and international luxury brands, though the street rose to fame thanks to Federico Fellini’s film La Dolce Vita (1960), and it now also features in La Grande Bellezza. Fellini developed a new style of film-making that came out of the Italian Neorealist period before him. The Trevi Fountain is just around the corner, and the scene of La Dolce Vita in which Anita Ekberg wades into the fountain has inspired overheated tourists for half a century now. Sorrentino’s deliberately Felliniesque film includes this fountain in passing.

St. Peter’s Square, where masses of pilgrims and believers assemble every Sunday to pray and listen the gospel of the Pope, has figured prominently in the history of Italian cinema for its cultural, religious and symbolic value.  Film maker Nanni Moretti in his serio-comedy “We have a Pope” (Habemus Papam) explores the universe of a pope who balks before giving his first public blessing from the famous balcony overlooking St. Peter’s Square.

Learning Rome and film in depth

While anyone can visit these film locations, real film buffs will want to step up the experience with a three hour guided walk. The “Director’s Cut” tour with Context Travel is led by docent Elisabetta Lodoli, an expert in film studies and an independent film maker. Elisabetta explains the reason for this film-based tour: “In Italy, culture, politics and aesthetics have always been deeply intertwined; Italian Cinema has played a key role in Italian and worldwide history of this visual art.”

Elisabetta helps visitors experience how Rome was (and still is) a source of inspiration for filmmakers – together you look at films on an iPad to consider the mise-en-scène and subsequent urban development. Through film, you can develop a greater understanding of the interplay between art, film and the city. And maybe you can also get her to interpret for you some of those bits of La Grande Bellezza that are utterly baffling!