On a whim, I accepted an invitation posted to the members of De Gustibus, a local enogastronomical society, for a “ski weekend” in the Dolomite mountains near Bressanone/ Brixen, in a small town called St. Andrea, at the ski hill Plose (also known for its mineral water of the same name). I was tempted by the long list of alternative things to do other than skiing/snowboarding – snowshoeing, sledding, hiking, skating… or as it turned out, sleeping and looking at the view… 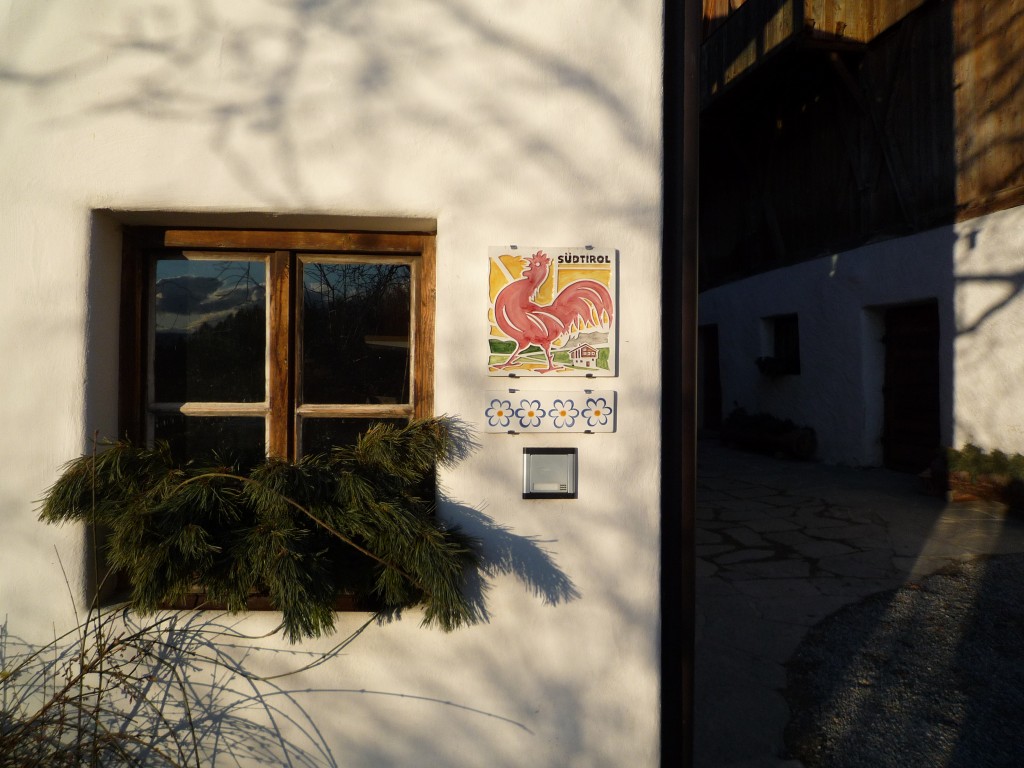 I write to you as an entirely ignorant visitor of the area that I thought was called Alto-Adige but apparently the locals prefer to call it Sudtirol. The difference is discreet: it’s either north Italy, or south Austria. I knew that this was a special “protected” region and I knew that they had two official languages – German and Italian – but I thought that was just an official thing, just highway signs, like in Canada where nobody really speaks French. Well I was wrong.

Sudtirol is a totally different Italy. Different from all the places I have been, and I’ve been to just about every region except Abruzzo and Molise, Piedmonte, and Sardinia. Just four hours drive from Florence I landed in an area in which architecture, worship, language, food, and apparent habits seem to have rather little in common with all that I associate with Italy. I cannot say that I was there for long enough, nor that I read enough about it, to write much from an art-historical standpoint, but I can say that I had a wonderful time and that this remains, for me, an area worth exploring. 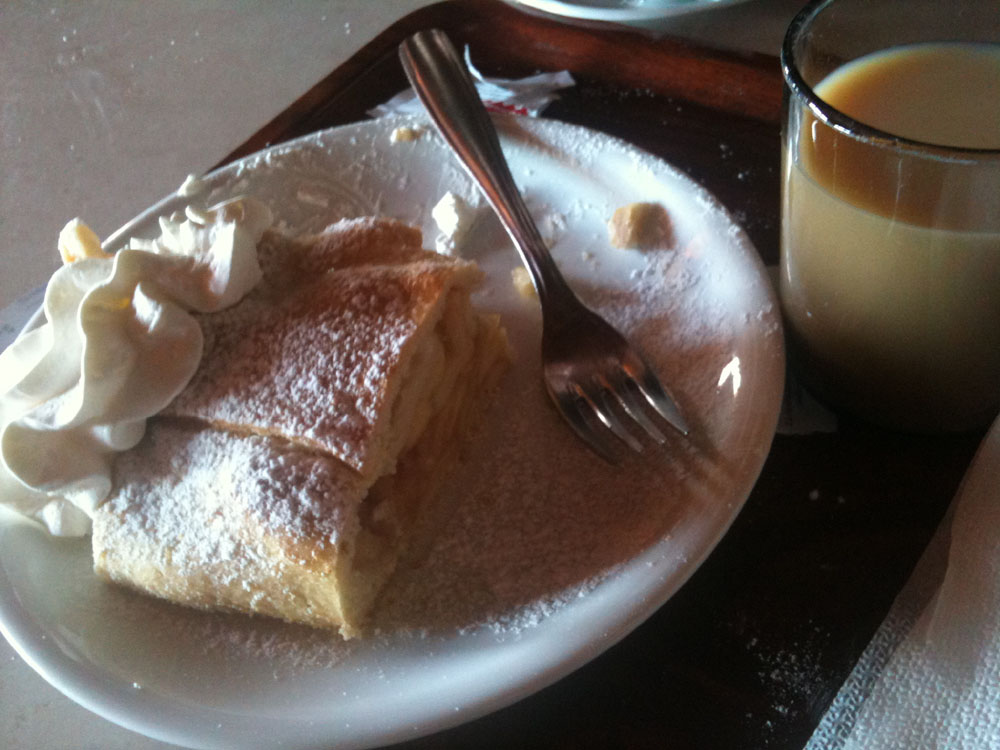 First off, my husband and I decided to step back in time (to when we were young and sporty) and attempt snowboarding. We found Plose to be a pleasant little hill just right for intermediate skiers and not too crowded (on a Friday). Rentals were good quality (Burton snowboards and boots) and reasonably priced, though lift tickets were a bit high at 35 euros. We quickly found ourselves to be not very fit, and although I was thrilled to still be able to get down the hill without falling, so we soon retired to the quaintly decorated lodge where we enjoyed streudel and tea (me), and unfiltered beer (him) at totally acceptable prices.

Just a few hours of snowboarding can take a lot out of you so it’s a good thing we had good company and an organized leader who proposed things like a snowshoe walk up the mountain or an evening hike, dinner, and sledding down the mountain (in the dark). If sledding in the dark is not your thing, you can also sled during the day on the 10 kilometers of runs for this purpose. 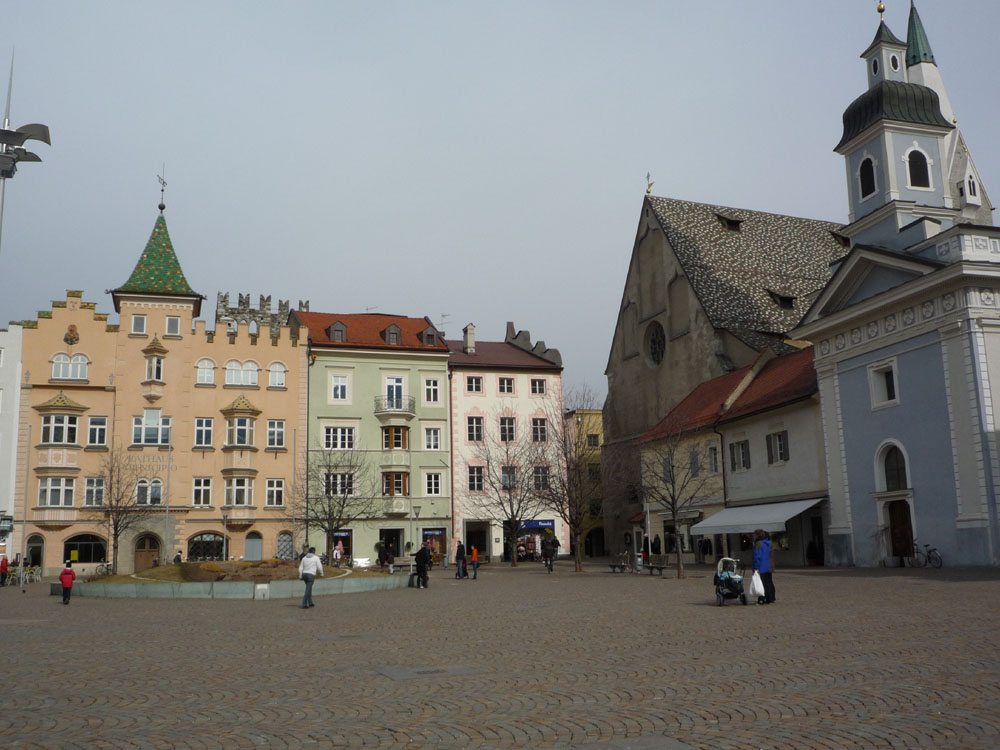 In the end, we decided against further sports and headed to Bressanone, as it’s known in Italian, or Brixen, its local name. Founded in 901, this is a supremely cute town that looks entirely Germanic to me. We took in the pedestrian area with its coloured houses and lovely open square upon which the cathedral and city hall (rathaus) face.

The cathedral has 10th-century origins but its current form dates from 1745 under the patronage of the prince-bishop Kaspar Ignaz von Kunigl, and it’s highly Baroque, yet quite attractive. It has a wonderful organ with 3335 tubes and an important choir (70 members), which would be great to hear perform together – unfortunately there were no concerts planned during our visit.

Detail of a knob, side door of cathedral

While in Brixen, it’s worth it to go into the Sportler store – a big multi-sport store similar to REI in the USA – and go up to the top floor, where there is a panoramic terrace from which you can see the whole town and the mountains that encircle it.

Even closer to “home”, St. Andrea is the mountain town just before you get to the ski lift, and it has a lovely little country church and graveyard.

Next to the church is a 16th-century chapel dedicated to Mary that is almost as big as the church. This was the only Marian devotion that I noticed in the area. While here in Florence there are tabernacles on street corners, often images of Mary, in this mountain area they seem to be more devoted to Christ, and they mark homes or streets with crucifixes protected by wooden structures that reflect the steep roofs of their own houses.

Perhaps the best part of this relaxing weekend was the agriturismo in which we stayed. The Jocher family were our hosts at Frötscherhof, a recently restored typical farm house (a type of building called “maso”). We arrived by night, so you can imagine my pleasure when I woke up the next morning to find myself surrounded by mountains that I could see from my bed. 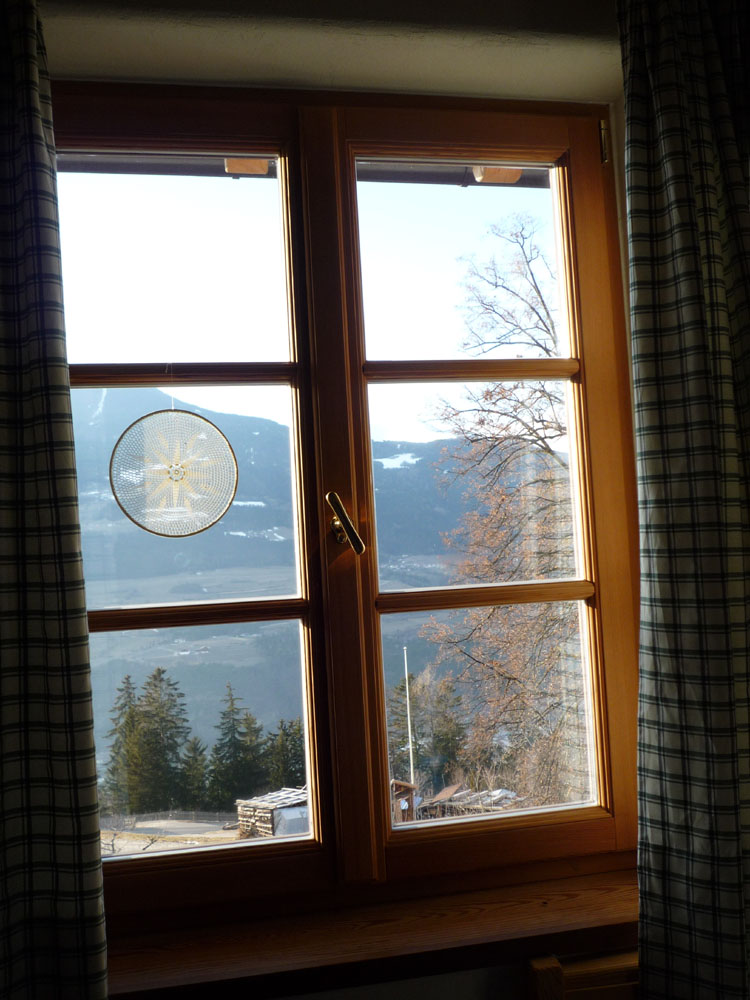 This is a real working farm with cows for milk, a pony (for kids?), a few goats, rabbits, chickens, cats and dogs, and all. We enjoyed fresh milk, eggs, and yogurt made by the owners, as well as the jam and fruit syrups they produce (which I’d already tasted thanks to De Gustibus). 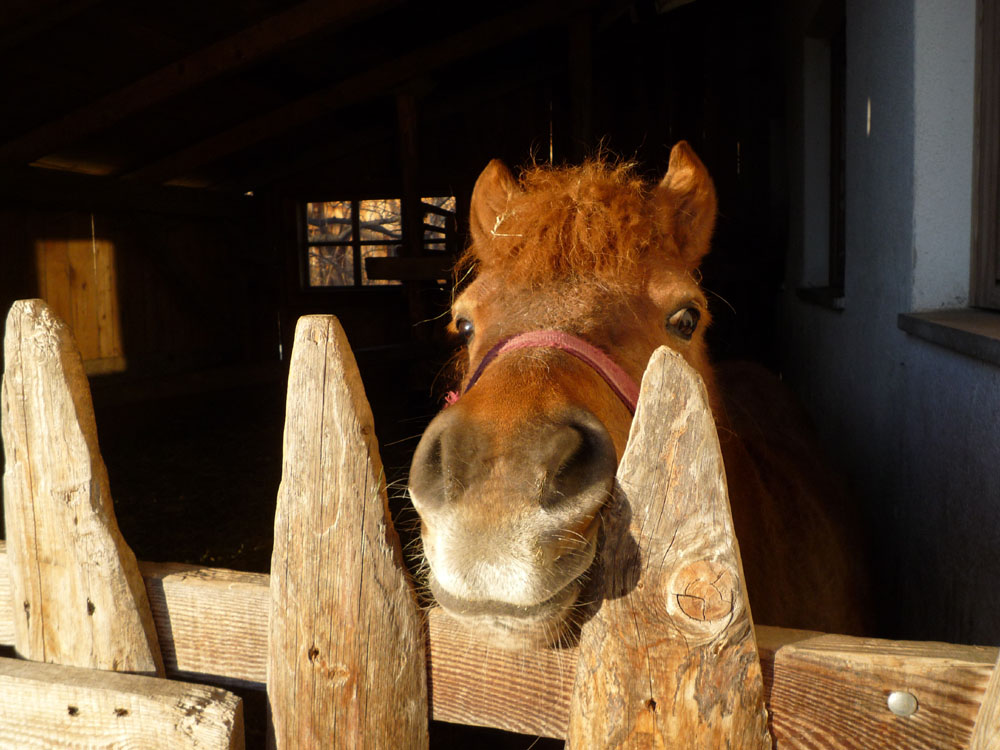 Many of the elements of this agriturismo seem to be typical of the area. The family “maso” is 100 years old and recently restored to the standards of bio-architecture. If you take a look around the mountain, in fact, you’ll see a lot of solar panels, and there were panels on this home too. Walls are thick and homes are built to keep in the heat, which was plentiful (and it was a few degrees below zero outside). Inside, everything is custom-built using local woods. It’s simple and earthy yet nothing was missing, not even in the well-equipped kitchen (that had a dishwasher!). Under the sink I found a complete recycling bucket system that made sorting our garbage fun: in this area recycling and respect for nature is just their way of life – as it should be everywhere. This place must be paradise in the summer, especially for families with children who are encouraged to participate in farm life. There is a very friendly pony on-site and a few goats that all come running when you head over to their shed for a visit.

On the way back to Florence we stopped in Rovereto to visit the MART museum – which is a story for another post! 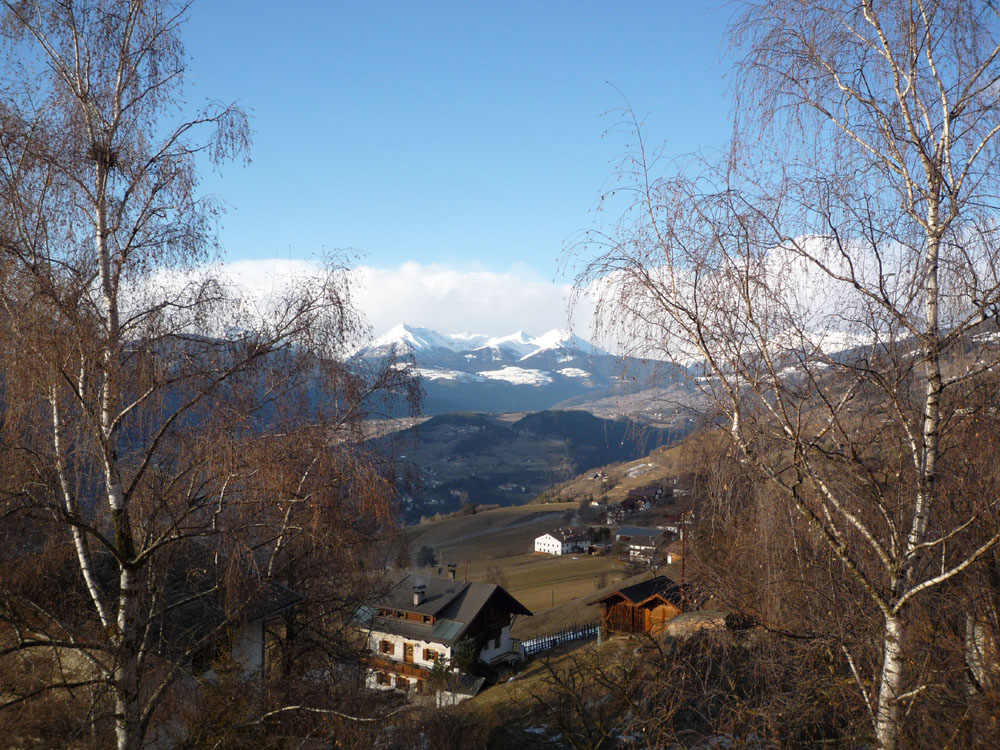 PS: I returned to Frotscherhof in January 2012 and reviewed it on Tripadvisor too!