By Katharina Allès Trauttmansdorff on Nov 5, 2015 with 0 Comments

The Venetian villas, of which thousands were built over the centuries, have a special place among Italy’s rich cultural and architectural heritage. Their boom began at the end of the 14th century when the Republic of Venice allowed its population to own property on the mainland. Rich families from the lagoon started to buy land on which the exclusive villas were constructed as the patron’s home away from home, usually with a working farm that would provide them with much-needed produce and leisure space that the city didn’t afford them. Now they provide an important tourist attraction, but some of them can also be rented for an exclusive and historic experience. 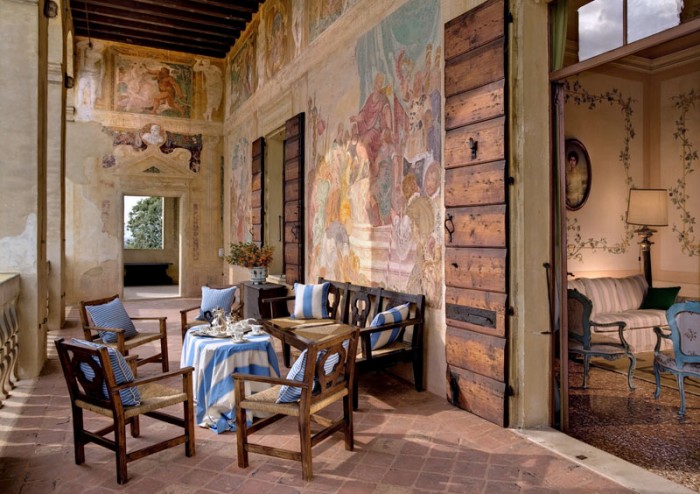 You could be cultivating your noble persona on this loggia over breakfast! (Villa Elmo Capidilista from Trust&Travel)

The Venetian villa was free standing to grant privacy to the aristocratic family who owned it, but within easy reach of the stables, storage and farm buildings on the estate. Today we think of Italian villas as exclusive and independent holiday homes in the countryside, but through the centuries a villa was always part of a larger context. On many of the estates Trust&Travel works with this is still the case. An areal view of the Papafava family’s Tenuta Frassanelle near Padua gives a good idea of a typical architectural layout of an Italian estate. 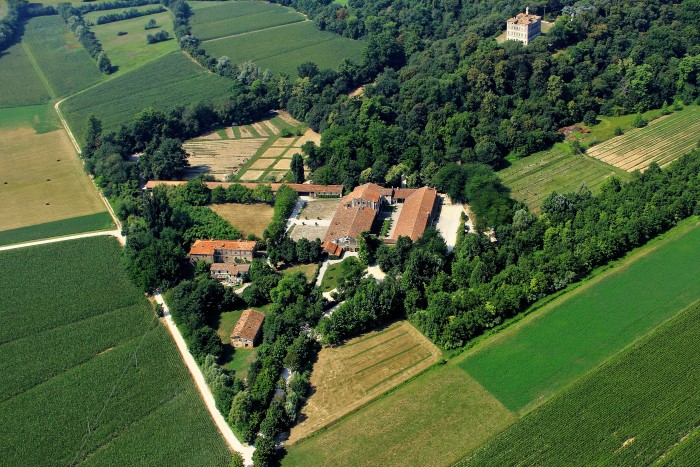 The villa is a Latin term, so explorers of the bel paese are well accustomed to the brown signs pointing to yet another excavation of a villa Romana. Many of these archaeological finds display the remains of Roman villas that were adorned with mosaics, and equipped with private thermal baths and under-floor heating. The art of bathing and the elaborate heating systems of the Roman villas were lost in the Middle Ages, but their architecture and artistic decoration were rediscovered and taken to a new level during the Renaissance.

The man to do this in the Veneto was Andrea Palladio. Born 1508 in Padua, the stonemason and architect spent most of his adult life in Vicenza, with occasional work stints in Venice (where he designed the churches of San Giorgio Maggiore and Il Redentore). Palladio went back to ancient textbooks to study the layout of Greek and Roman villas, public buildings and temples. After years of scrutiny, Palladio created his own architectural principles that he laid down in his Four Books on Architecture, a Renaissance masterpiece that is still published today. Focus on symmetry and proportion, and great respect for the genius loci (literally, local genius) are some of Palladio’s trademarks. He built fervently during his life, and countless Venetian villas were designed following Palladio’s principles after his death. His architectural treatise reached far beyond Venice and its hinterland – the White House and the National Gallery of Art are among the many Palladian style buildings in the USA. 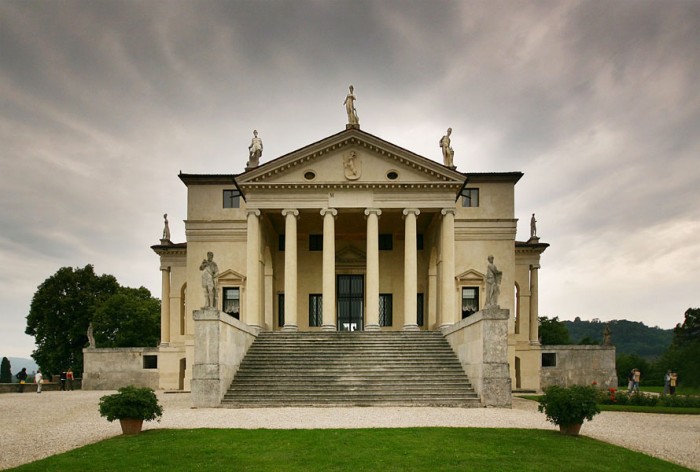 Villa la Rotonda is an ideal starting point for travellers exploring Palladio’s legacy. Thomas Jefferson, the third president of the United States of America, studied Palladio’s work for years and modelled his private home Monticello according to the architectural outline of Villa la Rotonda. 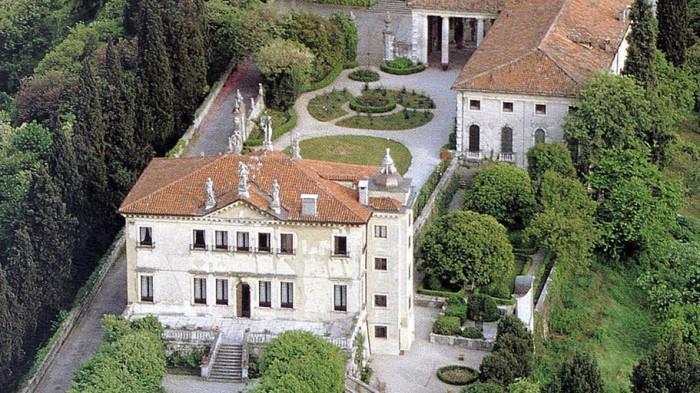 Trust&Travel clients can rent an apartment right next door to the masterpiece in Villa Valmarana ai Nani. Connected to villa la Rotonda by a lovely footpath, Villa Valmarana’s vicinity to Vicenza’s town centre makes of it a great base not just for the exploration of the UNESCO heritage villas and public buildings designed by Palladio, but also for day-trips to Venice, Verona and Padua, which are all easily reached by train.

Villa Valmarana frescoes in the “foresteria”

However, Villa Valmarana is in itself a location worth more than a day’s stay thanks to the work of Giambattista Tiepolo, who painted the frescoes of the villa in the 18th century. 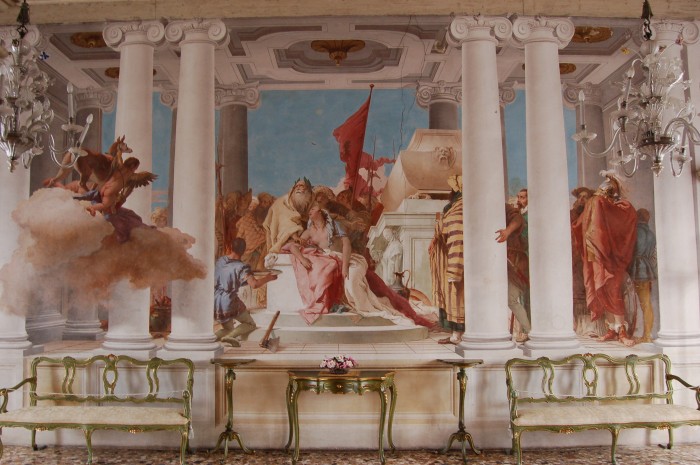 Doesn’t this fresco look like it could be in a Ducal palace? It’s GB Tiepolo in Villa Valmarana! 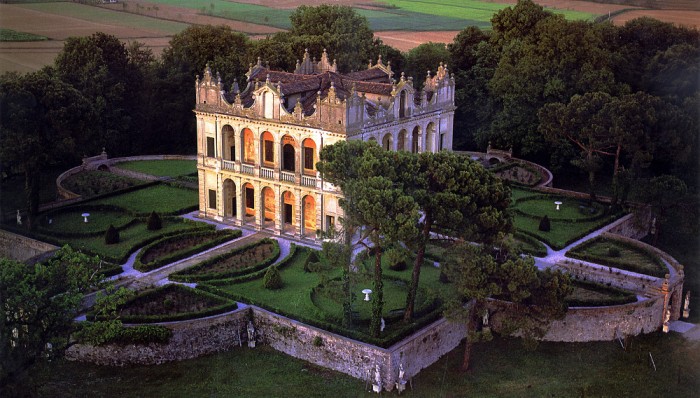 Designed by Veronese scholar Dario Varotari in the 16th century, Villa Emo Capodilista takes the ideas of frescoed walls to the next level. They adorn not just the villa’s bedrooms, dining rooms and bathrooms, but also the outdoor loggias on all four sides of the building. In 2004 Villa Emo Capodilista served as a film set for The Merchant of Venice, the movie version of the Shakespeare play which starred Al Pacino, Jeremy Irons, Joseph Fiennes and Lynn Collins. 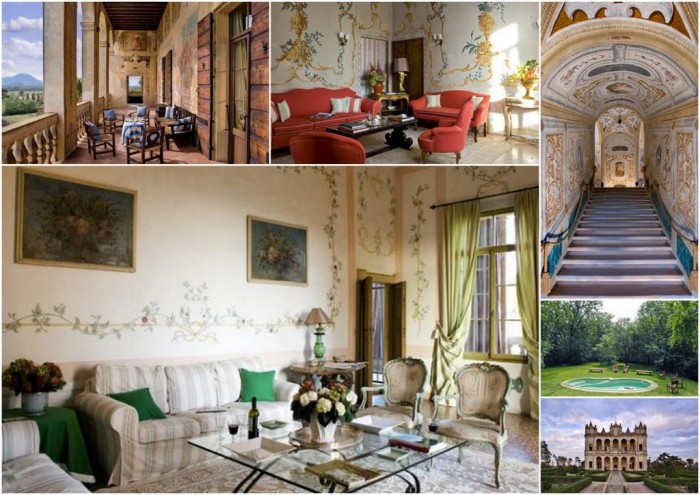 Some of the exclusive spaces in Villa Capodilista

Renting Villa Emo Capodilista guarantees a once in a lifetime holiday. This Venetian jewel transports you back to a time when the city of Venice was a powerful naval force and one of the world’s richest and busiest merchant hubs. Read My Little History of the Veneto Villas on the Trust & Travel blog for an impression of how the sumptuous life of the rich and beautiful may have looked like at these villas. 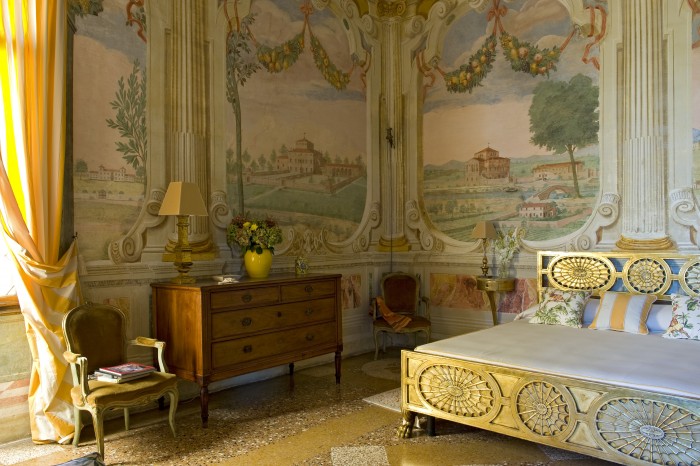 Hard to believe you’re allowed to sleep in this bedroom at La Montecchia!

If you don’t want to break the bank for a stay in Portia’s villa, book one of the appartments or a room in the B&B on the La Montecchia estate. The lovely garden of Casa del Prete (the priest’s house) is a personal favorite on the traditional Venetian winery and farm that surrounds Villa Emo Capodilista. 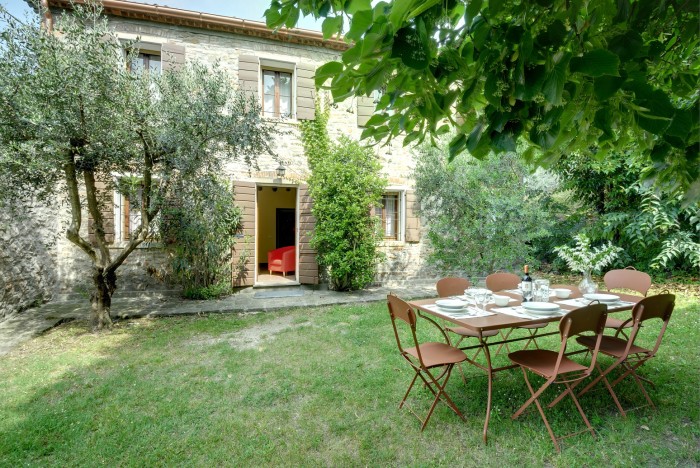 As an alternative you can also browse the lodgings at the nearby Frassanelle estate. Owned by the Papafava family since the 13th century, the backbone of the estate is a Venetian villa, whilst the farm’s former granaries and store rooms have been turned into comfortable apartments that will make for an affordable holiday near Venice. At la Frassanelle, guests can take part once-a-week in a guided tour to visit the artificial grottos commissioned by an aristocratic ancestor in the 18th century whilst remodelling the garden around the villa.