Sometimes fortune points us towards those little things in life that are more beautiful because they are unexpected. Living in Italy, it’s rather likely that those little fortunate things are of medieval or Etruscan origin. Hey, I never said I wasn’t a lucky girl. But I do have a nose for these things. The trick? Look out for the brown signs. 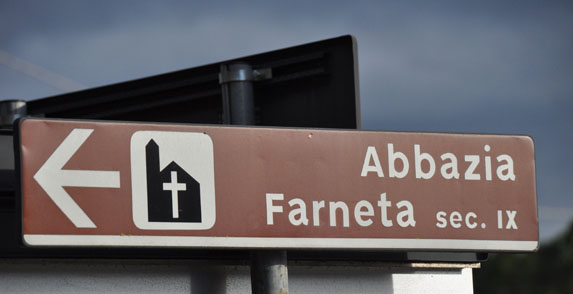 You know those people who say it’s not about the destination but about the voyage? I am not one of those people. I tend to favour highways and fast drives, especially when I am alone. But sometimes I concede myself more time for exploration, and that’s when the good stuff happens.

Returning home from Assisi the other weekend, I had a bit of time to kill, and was thinking of stopping at the outlet mall at Valdichiana when, just a few kilometers before that exit, I saw a brown sign. Speeing past at 120km/h, I read only “abbazia…” (abbey) and noticed that the sign for the exit in question, at Foiano della Chiana, had not been replaced with the new glow-in-the-dark kind. And I thought: “this is a sign.” Not literally, figuratively! 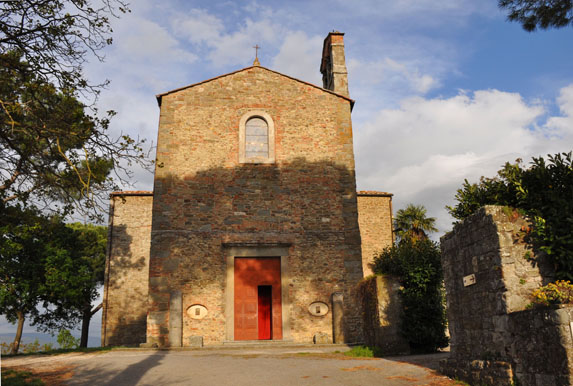 And so I got off at that exit and followed the brown signs that said “Abbazia di Farneta, secolo IX.” The softly turning road brought me swiftly uphill, and not far along, an arrow pointed left and I found myself parking alongside a charming medieval church. The late afternoon sun warmed its brick façade and the clouds all around made the sky look joyous, and I smiled. 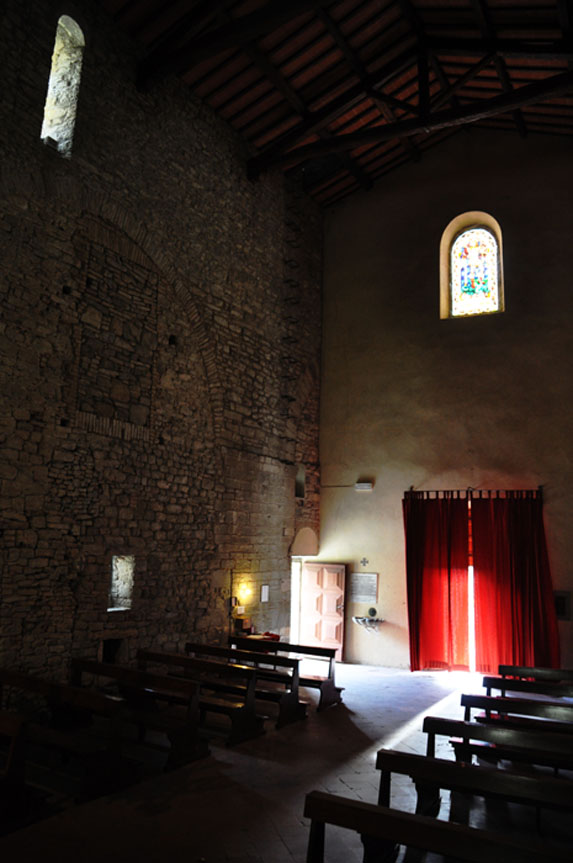 Another rare stroke of luck was that the church was open. Its doorway was protected by a red velvet curtain, and as I parted it, sun streamed in and lit its humble, single-aisle nave. Various moments of modern maintenance and restoration are obvious here, but it is also clear that this is a special church. It is, I learned, the oldest church in the Comune of Cortona, and was a Benedictine monastery. Some say it has Lombard origins, though it’s documented only to the year 1014. It was probably quite important in the 13th century and in continuous use, and thus occasionally altered, for a few more centuries until it fell into ruin in the 16th century. The church was restored in the early 20th century in an attempt to bring it back to its Romanesque roots. 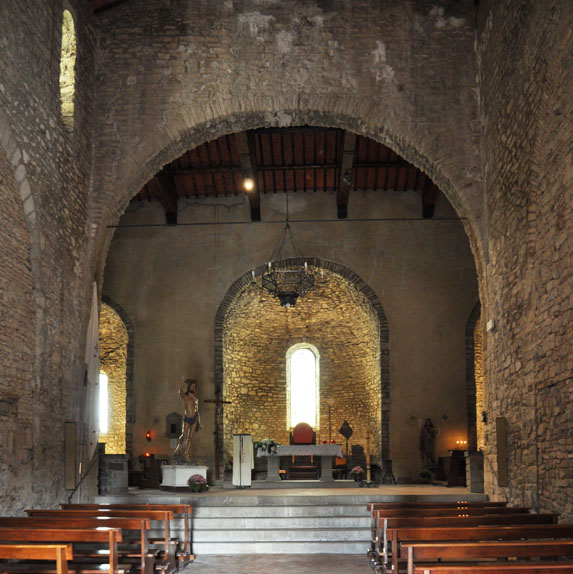 It is not typical of Romanesque churches in the area because it is almost Latin-cross shaped, and it has a deep raised apse over a large crypt. The back of the building is a series of rounded apses (you can walk around back to see these). The walls of the nave are thick, unplastered stone that betray the numerous changes to the structure over time – an arch, a walled up window, a larger door. Windows, up high, manage to bring in a fair amount of light on this sunny day. 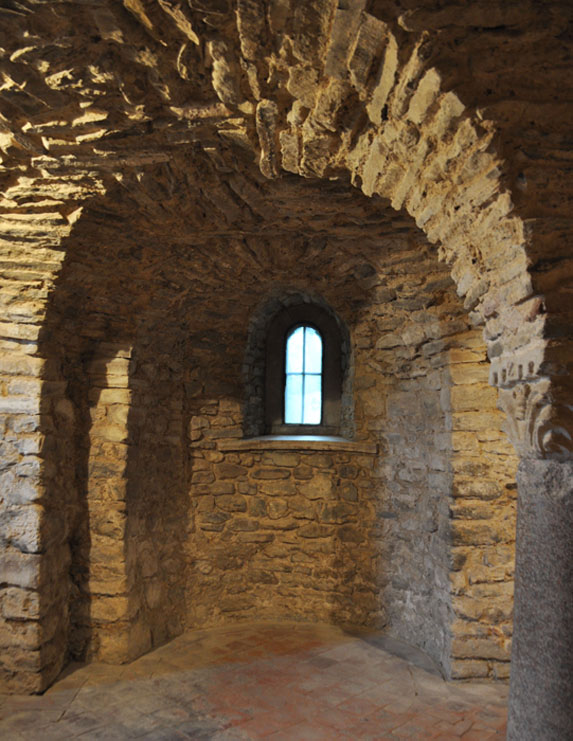 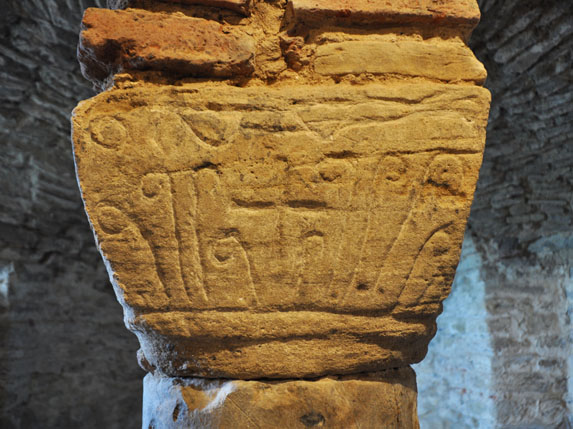 The crypt is accessed by stairs on either side of the rise and is quite well illuminated through small windows. The stone on the walls and columns is rougher here than upstairs, and the capitals are Roman spoils, but were never of the best quality.

The decorations of the church are not particularly worth artistic mention, other than a somewhat ruined fresco that looks to be 15th century or so. However, there is a wooden sculpture of the Madonna, covered in painted plaster probably dating to the 19th or 18th century, that is clearly an object of local devotion. She is honoured by jewels hung on her hands by devotees, and holds a basket of written hope. Light streamed in from a window and made her more beautiful than she objectively is. 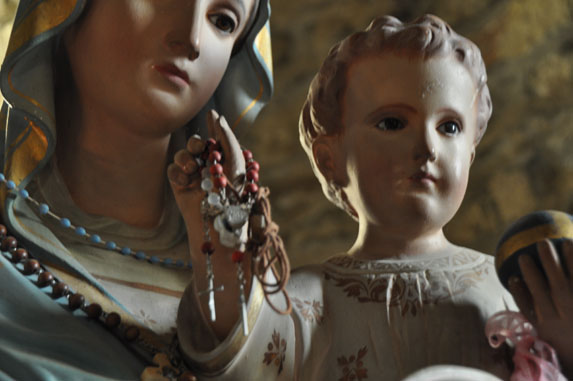 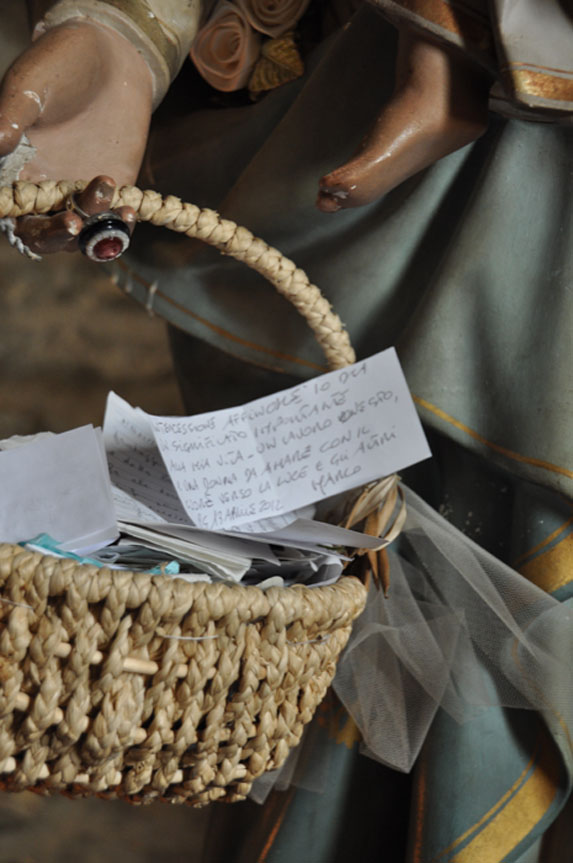 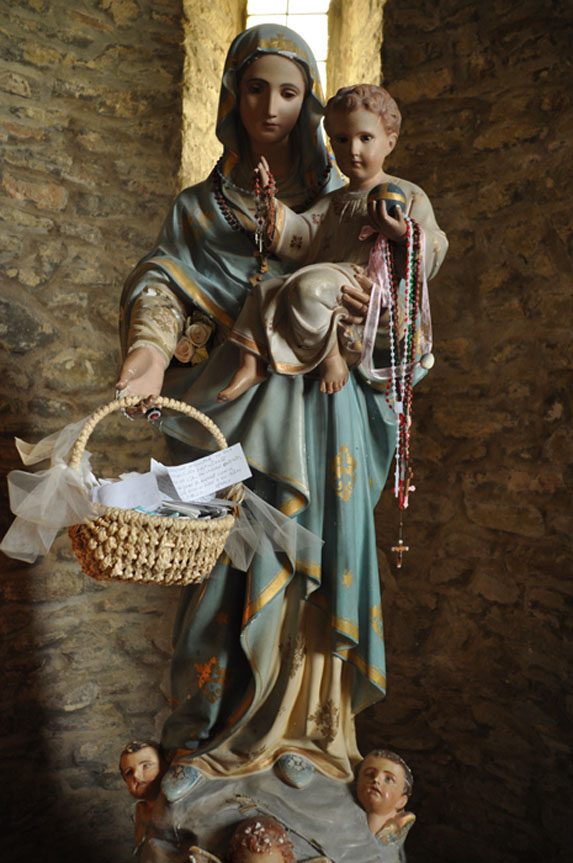 By the door is a conch-shaped baptismal font above which is a medallion, modern but medieval-looking, and a plaque explaining in brief the history of the building. 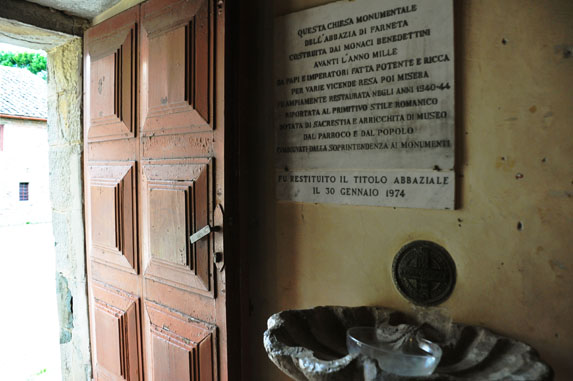 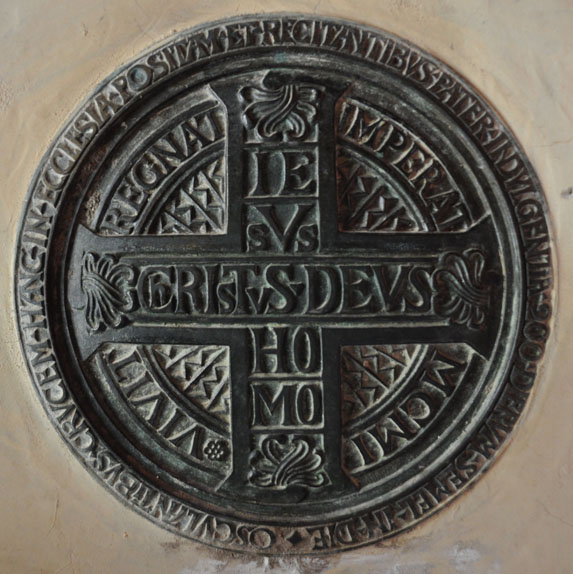 This is not a church that is written up in the annals of art history, nor really in any guidebook of which I know. And yet it is a real find: the oldest building around, and a site of contemporary local piety. What’s more, I had it to myself. And if you follow the brown signs, you, too, will find peaceful places off the beaten track that you can experience alone, and will always remember.