If I Had to Survive on Foraging

I dedicated this weekend to the oldest profession in the book. No, not prostitution – I’d be even worse at that. Something that came before that: foraging. A practice that harks back to the vegetarian half of the hunters and gatherers (ha ha), and that continues amongst the elders of Tuscany, who you often see peering at the brush at the edge of the region’s smaller roads. As a city kid, I like nature, but it had never occurred to me to look closely at the weeds in a field and promptly eat them. However, when I received a newsletter from a cooperative in Maremma organizing a series of encounters on finding wild edible greens, I signed my husband and myself right up. 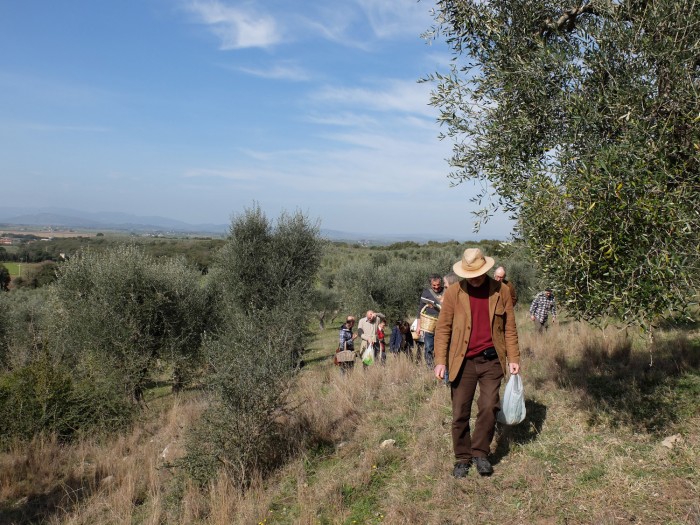 In the two day field-course (literally involving fields), I found out that if I had to live on what I gathered, I’d be tanned and have a very bad manicure, and certainly be skinny, for I’m quite sure you walk more than you gather most of the time, plus these things are full of fibre. I also confirmed that I have the memory of a goldfish, which I believe is zero. We were told Latin names and an assortment of local Italian names for each edible plant, which I wrote down in a book with taped-in samples and some attempts at botanical drawing. I forgot them as soon as I wrote them down. My capacity to spot the edibles in the wild is almost equally bad as naming them. Tommaso seems to have greater ability. Perhaps having lost his gender’s natural tendency towards hunting, he excels in memorizing names, and also in single-mindedly gathering huge amounts of a single edible green. 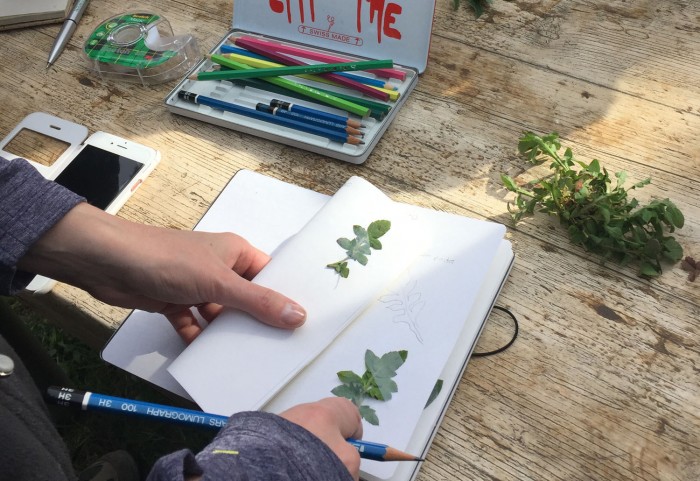 The class we took was two sessions of four hours, held not far from Roccastrada in Maremma, near to where we have a little home (in the town of Sticciano). It was organized by Cooperativa Insieme, which runs a few projects in the region, including a goat farm that we’d come across last year during one of our regular searches for small local producers of just about anything. Brigitte and Fulvio tend to the friendly animals on a state-owned property called Fattoria Le Venaie, where they occasionally offer workshops like soap making and this one, and where you can buy Brigitte’s delicious fresh goats cheese. 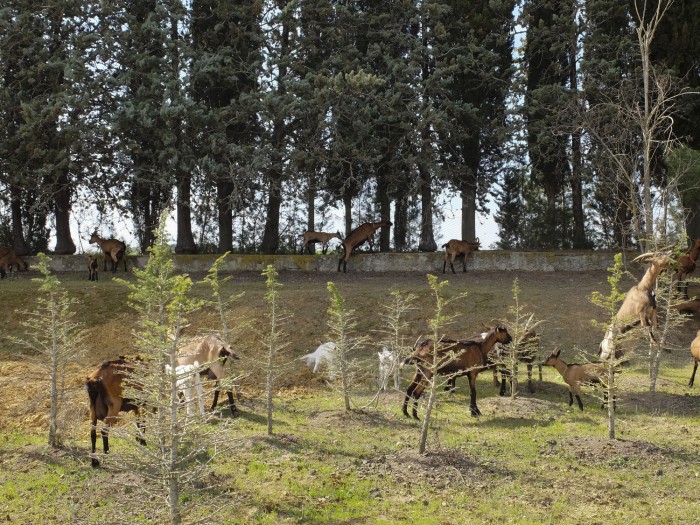 Did you know goats quite nimbly get up on their hind legs to eat tree tops?

Leading us in our exploration was Federico Selvi, professor of “Biotecnologie Agrarie” at the Università di Firenze, who has a home in the area and knows all the best spots to find free food :). The class culminated in a lovely picnic and we were blessed with good weather and simpatico fellow participants – who could ask for more?! 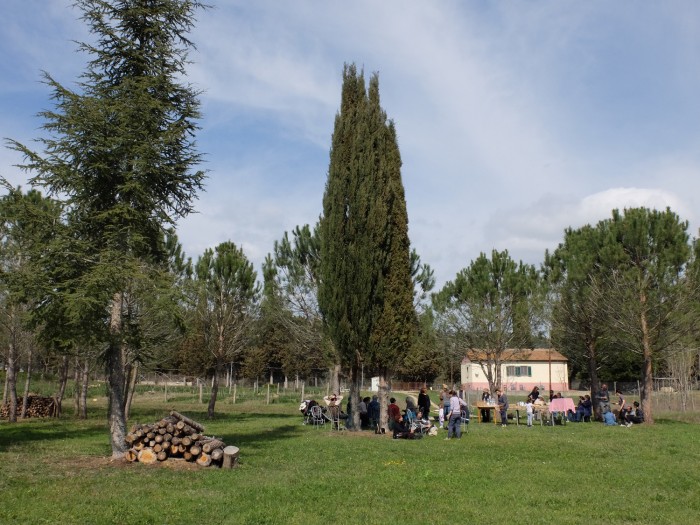 A convivial picnic is a fantastic end to a 2-day class!

The good prof kicked off the day pointing out something very reassuring. Unlike with mushrooms, where a mistake can kill you, poisonous wild greens are rather rare. Some may be prickly or give you the runs, but 95% of what you pick, you can eat, once you’ve gotten down a few basics. I observed that what we picked for the most part grows in little clumps (I am sure there is a more scientific word for this, but look at the pictures and you’ll know what I mean), not in single leaves. To pick them, you use a knife down at the base to try to get a clean cut. The most common have ample and irregular green leaves, and some with reddish striations. We learned that there are both annual and perennial greens, and so we must be careful not to over-harvest. 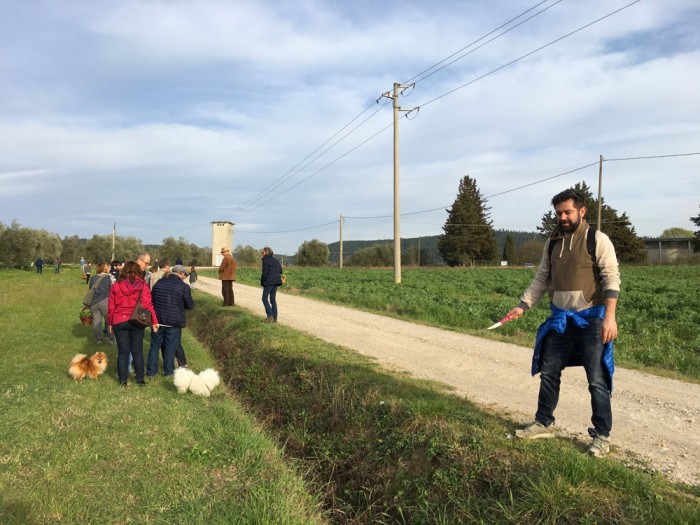 By the side of dirt roads there are delicious weeds, it turns out

Our group was let loose in a field, where we must have trampled more perfectly good green stuff than a herd of wild elephants. We quickly spotted some bietole that looked just like what you buy at the supermarket, and in fact were most likely seeds that blew over from where a neighbour had planted them; feeling very sure that these were safe, we grabbed a few bunches. There’s a euro or so saved right there! Tommaso then concentrated on Aspraggine, also known as spraggine (Helminthotheca echioides) because it has hairy bumpy leaves that are pretty hard to mix up with anything except its “lazy” cousin Picris hieracioides, which is less bumpy and more bitter. Luckily, I like bitter greens! I think we went a little bit wild (excuse the pun) since we filled a bag to the brim.

The second day we changed environments, meeting up at a point near Sticciano that represents a crossing between 3 different environments. A sparse field near the parking lot yielded more goodies than you might imagine – things I’d have thought were weeds can actually become salad… Near here there is a public access olive grove, where you can walk and find a variety of greens as well as herbs for seasoning and medicine. And on the other side one accesses the woods characterized by cork trees and Mediterranean brush. We also visited the Prof’s private garden, where Tommy decided to stock up on borrage, another good choice for beginners because it’s hairy and has a distinct flower. 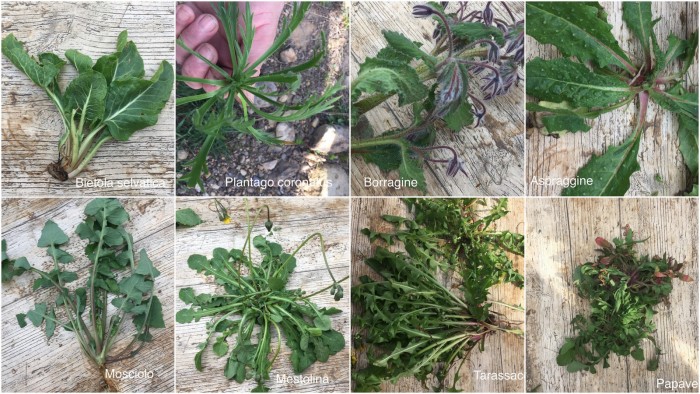 Tommaso photographed and labeled everything (I love my engineer)

One thing about greedily picking free greens is that you have to do even more cleaning than when you come home from the market! We spread out the bounty on the kitchen counter and separated it into piles by type. On the first night we boiled up all the Aspraggine and some other random bitter items and then sautéed it in a pan with some oil and salt (many would use garlic here), served simply with some white rice and goats cheese. As we cleaned up, I made a portion of home made pasta dough as I knew the next day’s greens would merit something special. 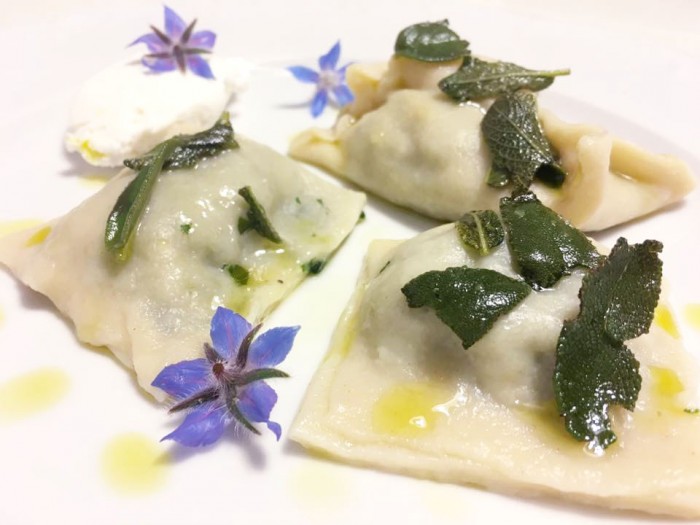 On the second night, while my husband cleaned up his borrage booty, I turned the dough into rustic tortelli filled with the remains of Aspraggine and some goats ricotta. We served these simply with butter and sage (which might have been too strong) and decorated the plate with borrage flowers. There is enough borrage to last for days, so the third night I made whole wheat pancakes filled with boiled borrage and served it to my lucky in-laws. Meanwhile I’ve had a salad with a cute little leaf called pimpinella, and our not-very-wild beet greens are safely tucked into the fridge, while some wild fennel tops await becoming a flavourful tomato sauce.

I think we have a new hobby. I like it. It echoes of local tradition and makes for excellent conversation with people of all ages. It gives purpose to long walks in the countryside and begs creativity in the kitchen. And it’s free.

Some tips for beginners (aka things I learned the hard way) 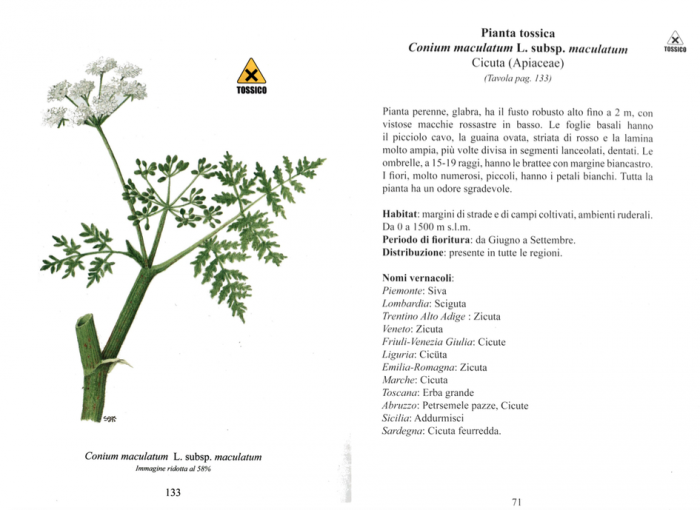 I frequently see this flower around and it’s easy to spot, and looks nothing like the edible greens we’ve studied. Good to know it’s toxic! [Credit: Edda Lattanzi, Sapori di Flora]