A hike to a hidden hermitage: San Guglielmo a Malavalle 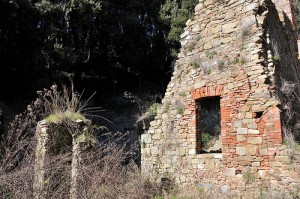 Hermitage of San Guglielmo a Malavalle

They say that the voyage is just as important as getting there. I think “they” must be using this expression metaphorically, because frankly I like to have a destination. And when I get there, especially if I’ve made a supreme physical effort to do so, I’m going in no matter what.

Today’s destination was the ruins of the Hermitage of San Guglielmo a Malavalle, just 6 km outside of Castiglione della Pescaia in Maremma. I found this in the listings of pieve’s and churches in Maremma on the official tourism website, which provided “Loc. Malavalle” as the address. Unknown to Google maps and Bing, we found unconvincing directions on a website called abbazie.com. It was this author’s description of the way to the abbey that clinched the deal:

The ruins of the Abbey of Malavalle are situated in the comune of Castiglione della Pescaia in the locality of the same name. If you’ve never been there before, getting there is not easy since this requires taking a path alongside the comunal acqueduct of Castiglione for a while until one finds the secluded abbey. To get to this path, at the roundabout at Castiglione take the road on the right towards the artisans’ area, for about 2km until you reach an unpaved road. Here you’ll arrive at the first farm where you will leave the car and follow the acqueduct. The probability of getting lost is very high.

High probability of getting lost. Right on. What could be better on a sunny February’s day with a high of 18 degrees? So we packed cookies and water and put on our hiking shoes.

Sometimes when you want to get totally lost, you can be severely disappointed. There were signs for the hermitage right away on the first road away from the main roundabout at Castiglione! The road was paved and more signs led us to the final farm at which we were to park. There was a lovely sign indicating the hiking path to follow – with English translation! – and the path was nicely maintained and reassuringly indicated with signs the whole way. 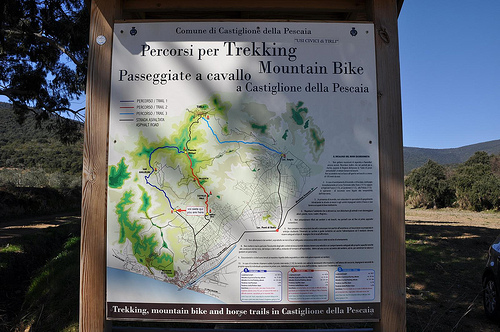 No swarms of tourists, however, appeared to be following these signs. Nor was there a paved parking lot or restrooms, so it seemed promising. We set out on the packed earth trail, the sun warming the morning air and the sky a ridiculously strong blue. The first part of the path runs alongside open fields, and soon you find the ruins of an old stone acqueduct on your left. After a few minutes we ran into a group of friendly horseback riders with whom we confirmed directions to the abbey. They said rather dubiously that it’s a good three kilometers walk uphill. I guess we don’t look that fit. 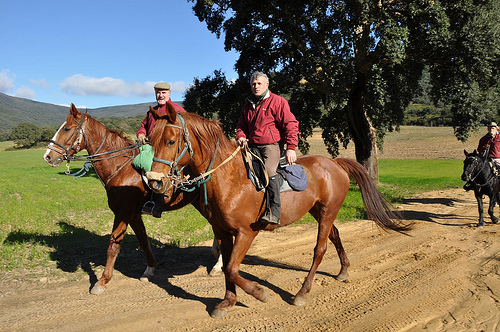 Horseback riders greet us at the start of the path

The path is indeed 3.2 kilometers long from the first sign to the abbey, and goes 225 meters uphill. The terrain is easy packed earth, with a few opportunities to cross shallow streams. At the halfway point there is a mill (and picnic tables), after which it gets more rocky and the pitch gets steeper. Although you’re walking mostly in the woods, it’s not very thick so the sun shines through in many areas. This path continues another 3km beyond the abbey in the direction of Tirli, though that part is steeper.

Hermitage of San Guglielmo a Malavalle

The hike to the hermitage was certainly a major part of today’s fun, but arriving at the Abbey was our goal. It’s not at all cool when you hike an hour uphill to find a metal fence and a restoration sign around the ruin you intend to visit. The sign says restoration began in 2005 and was to end in 2006, and cost 86,000 euros. An amount that was barely enough to change the roof, it appears, for the restorers seem long gone. 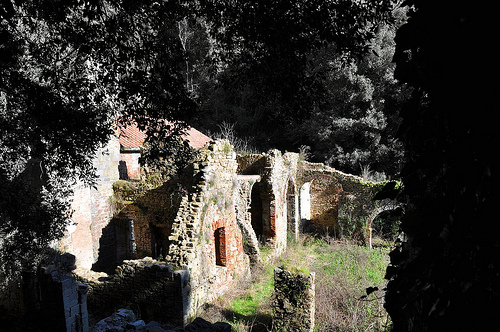 The hidden hermitage of san guglielmo

Have no fear. While I don’t encourage trespassing, we did opt to enter the closed ruins, which appeared to be perfectly safe. Two parts of the fence had been very purposefully removed, in one case by someone who had clearly brought a large tool with which to do so. When trespassing in unsafe buildings, be sure not to enter any closed areas with unsafe looking arches that might collapse on you at any minute, and step carefully so as to not fall into holes. We did see what appear to be human bones inside the church…

San Guglielmo was a 12th century saint who, after various pilgrimages that brought him from his native France to Italy, retreated in Hermitage here in Tuscany. He is said to have slayed a dragon in the woods near Castiglione della Pescaia which means we can now hike safely without risk of dragon bites or burns (the only wildlife we saw was a field mouse). Malavalle became the main house of the order that this saint founded. The small church with a rounded apse dates to the 13th century, and the abbey appears to be annexed at one side. While it prospered for centuries, the order abandoned this location in the 15th century; kept by the Agostinian order until the 17th century, it’s been falling into ruin ever since. The recent restoration appears to be mainly consolidation and the new roof over the church.

Guglielmo’s saint day is February 10th but the locals celebrate him with a procession from Castiglione to the hermitage only on the second Sunday of May – probably because not every February is as warm as it was today!

On our way back down I reflected upon the medieval nature of the path we followed… probably it wasn’t all that different a thousand years ago, when sandaled monks hiked alongside the river whenever they needed supplies from neighbouring Castiglione, braving dragons and invading armies.

Who’s going to be the mayor of Malavalle? I added the venue on Foursquare: