Livorno: what to do in this welcoming port city

I thought I knew every corner of Tuscany – after 20 years here, I’m only missing the Lunigiana. But somehow I’d never been to Livorno, so when I was invited by Barbara and Giorgia of Agave in Città, a boutique hotel, to spend a weekend in the city, I seized the opportunity. As soon as I arrived, felt the sea air, and saw the sun glint off the canals of the historic Quartiere Venezia, I didn’t want to leave. How could I not have known that this city was planned in the 16th century and that its canals are recognized by UNESCO? Here’s what I learned about Livorno and why you should add it to your must-visit list. 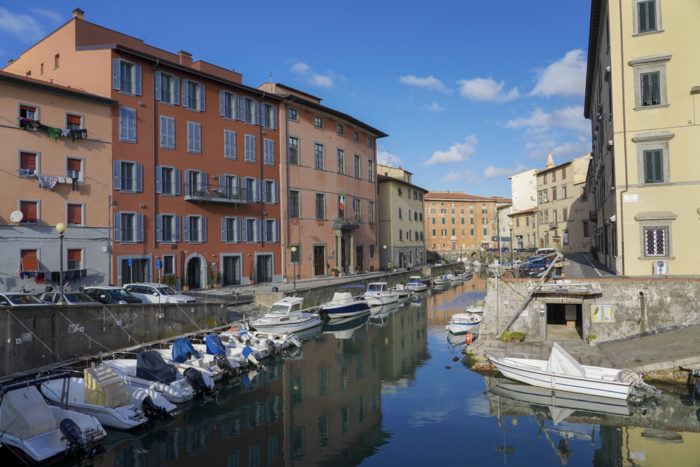 Venezia Nuova in Livorno is the city’s historic district characterized by canals. I stayed in the beautiful red building – Agave in Città!

Livorno as a 16th-century ideal city

My travels in Italy are usually motivated by historic monuments or temporary exhibitions, for the most part of Renaissance art. Livorno doesn’t have churches or paintings from the Quattrocento, but the city itself has interesting history. Desired as a port for the Grand Duchy of Tuscany, what was in the Middle Ages a small, marshy town was built up entirely in the sixteenth century. In 1577, Bernardo Buontalenti was hired to design it as an ideal city, a fortified town with a pentagonal design. The historic heart of the city is part of an enlargement in 1692; Venezia Nuova was built with the help of Venetians, a new mercantile district with direct sea access thanks to the canals that criss-cross it. 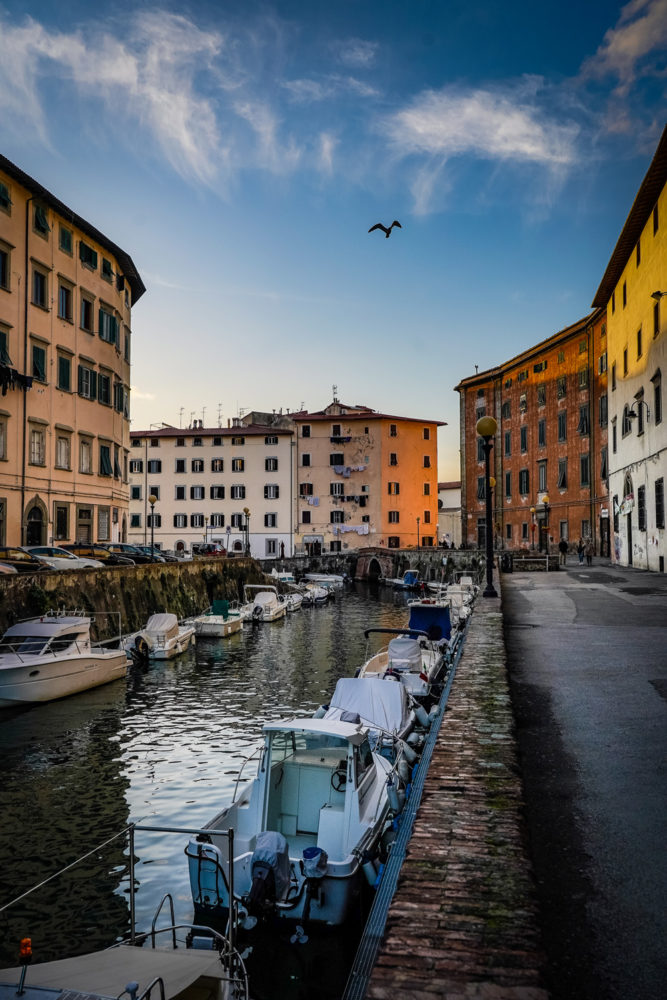 One of the canals in Livorno’s Quartiere Venezia

Building the city was all well and good, but the duchy needed people to move there to help build, and then to stay. First, they let minor criminals out of the Florentine jails: i.e. “if you survive the malaria, you can stay.” This makes Livorno the Australia of Tuscany. To up the social level a bit, they realized they needed to attract commerce, which was done in two very forward-thinking ways. First, in the late 1580s, it was declared a free port, meaning that no taxes were paid to import through here. Second, between 1591 and 1593, Grand Duke Ferdinand I created a series of laws called the Leggi Livornine with a constitution – still active today – that says:

The law, then, opened the city to people of any race or religion to live and work freely. Word got ‘round quickly, for within a decade the number of inhabitants went from about 1500 to about 10,000. The great diversity of peoples, especially numerous Sephardic Jews and Armenians, contribute to a very different Tuscany than one encounters even a few kilometers down the coast, characterised by entrepreneurship and a keen sense of humour, openness and acceptance.

What to see and do in Livorno

On a sunny day, Livorno is a great place to explore by foot. My home base was right in Quartiere Venezia, which is the city’s most charming and historic area. Many of the narrow streets along the canals are pedestrian, and I immediately found wandering around here quiet and relaxing: the only sounds are of people shouting greetings or working in their canal-side garages, as well as seagulls and occasional blast of a foghorn. On a smaller scale than Venice, the canals have the same effect of colourful, reflective light, although the feeling is somehow very different – Livorno is newer, more productive, a bit rough around the edges. 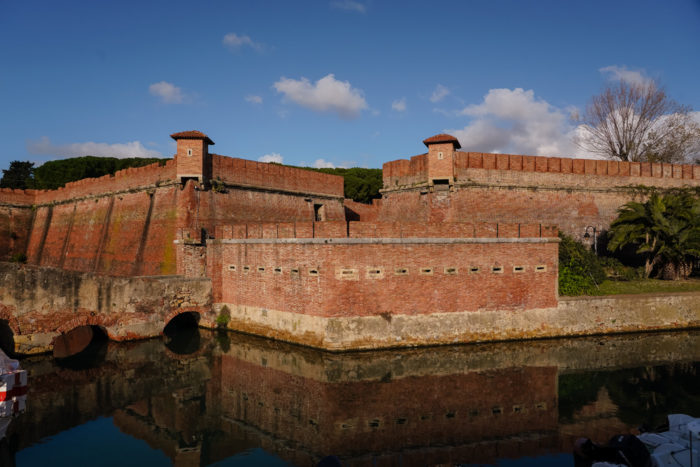 Following the canals brings you to the “new” fortress, Fortezza Nuova, designed by Buontalenti. Entering over a drawbridge and through a deep tunnel that feels almost sketchy, the area is now a large park populated, it seems, by the area’s teens, as well as by dog walkers. 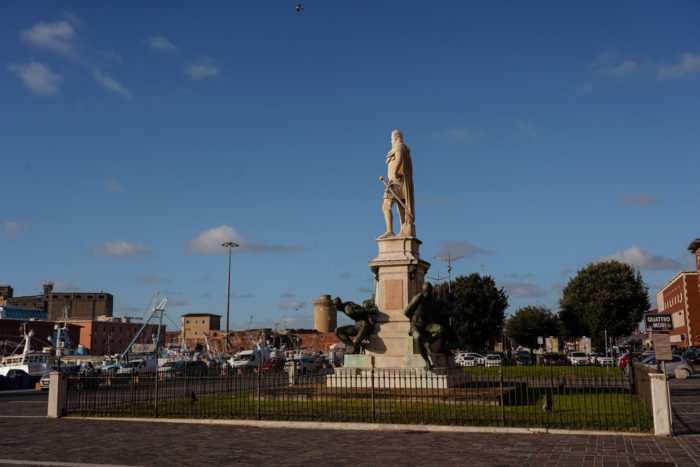 The Four Moors statue seen from the “secret” spot

Heading towards the sea, we encounter a large road, and along here, Grand Duke Ferdinand I can be seen proud of his achievement defending this city from pirates in the city’s most famous sculpture. The Monument of the Four Moors was named not for him (standing above, in marble) but for the four dominated bronze figures below. These four bronzes are by Pietro Tacca, who you might recall was responsible for the famous luck-bringing wild boar in Florence’s Mercato Nuovo. These figures were apparently modelled on real Saracen pirates, who wriggle in captivity. There is one spot in this piazza – from which I took a photograph – that is considered good luck if you find it; you’ll know you’re there because you can see at least part of all four bronze figures (in one case, just a nose). It’s marked by a small, slightly different tile. 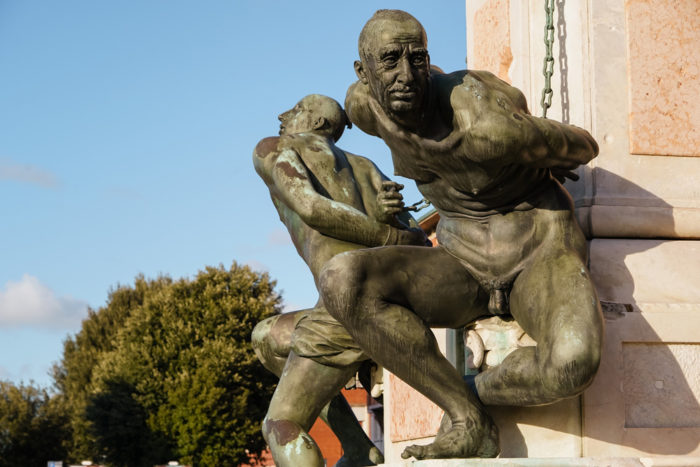 Detail of one of Tacca’s moors

Nearby, the port authority’s intention was to extend the decorative scheme with another two fountain sculptures by Tacca representing sea monsters; destiny had it that these would not be installed in Livorno and made their way to Florence, where they create a symmetrical addition to piazza Santissima Annunziata. Few tourists bother stopping to look at the copies (from the original cast) that the city of Livorno had made in the post-war period, now located just a block away from the Four Moors, unceremoniously encrusted in pigeon droppings and separated by a bus stop and a street. 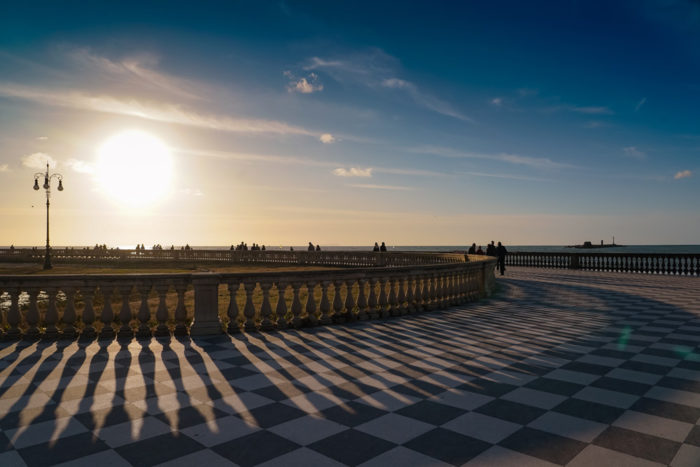 From here you can walk, or jump on a quick and frequent bus, to the famous Terrazza Mascagni, named for the 19th-century Livornese composer Pietro Mascagni. The chequered photogenic masterpiece was built in 1925 and enlarged after WWII. With the sea on one side, occasionally splashing over the rocks and surpassing the elegant balustrade that separates us from the blue, the surprise is the sinuous quality of the inland side of the terrace. Where it ends, it gives way to a wide, flat park where some attempts have been made to grow green grass. On a warm winter’s afternoon, this is the place to be for families in Livorno, with kids testing bikes and rollerskates on the historic pavement, or flying kites in the wind that you can imagine is always strong here. 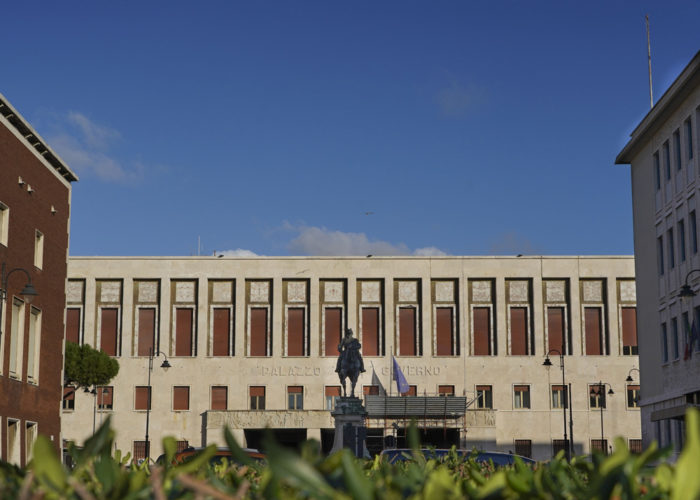 Being a strategic port isn’t good for historical monuments, so the cathedral and its large square were completely reconstructed after the war. Livorno has a lot of buildings created in the “Fascist” style, re-baptized “Rationalist” after WWII – see, for example, the Palazzo del Governo (1939), just steps from the Four Moors, which was part of a first phase of urban renewal that the Allied bombs “merely sanctioned” after the area was already condemned in the late 19th century, according to Massimo Sanacore, director of the city’s archive in a 2016 article. Though it’s hard to see how the visual extension of Fascist ideology could ever jive with the Livornesi, the Rationalist style persisted into the 1960s in a rebuilding of the historical center that may deserve a closer look. 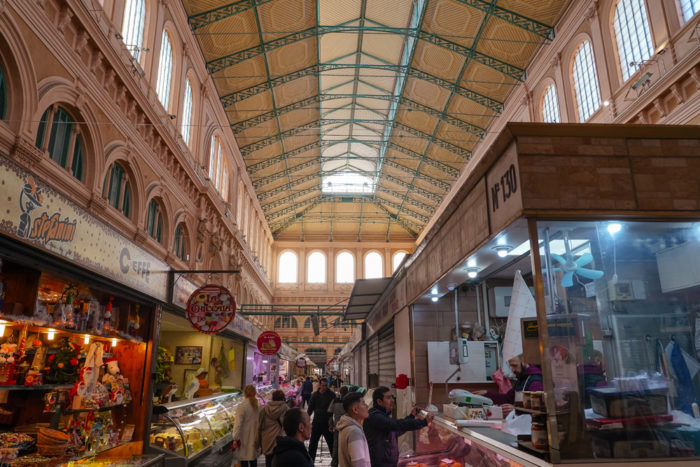 The Mercato delle Vettovaglie is the central market. You know you’re getting close – on a weekday – when you get into an area lined with market stalls that go well beyond the 19th-century steel and glass structure, inside of which are 200 stalls selling fresh fish and other foodstuffs. There’s buzz both inside and outside, and this is the perfect area to grab some street food, be it fried fish or the area’s famous cinque e cinque, a chickpea flatbread. Inside the market, “Alle Vettovaglie” serves lunchtime favourites and a wide selection of wine. Stop for a coffee at any classic bar afterwards, pay next to nothing and spy on locals’ conversations.

2020 marks the 100th anniversary of the death of Amedeo Modigliani, perhaps Livorno’s most famous artist. The city wished to honour him with a blockbuster exhibition, but this is no easy feat: Modigliani is one of the most copied artists of all time, to the point that a few recent shows have unwittingly displayed falses. Between a sketchy market, the sky-high price of originals, and their scarce numbers, only the richest museums can really put on a retrospective. This season, Livorno settled on the display of a small, authentic collection, expanded by works by minor artists present in Paris at the same time. You can see my review of Modigliani and the Montparnasse Adventure. Masterpieces from the Netter and Alexandre Collections in The Florentine. The exhibit runs until February 16, 2020. 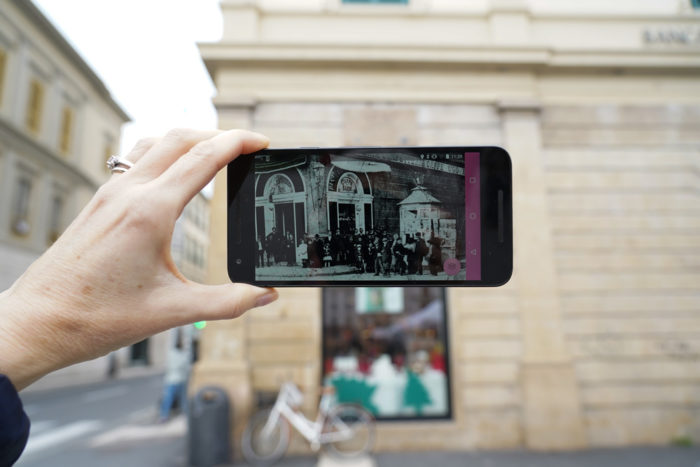 But Modigliani doesn’t disappear when the exhibition ends – au contraire! Uovo alla Pop is a cultural association, street art gallery and start-up offering “experiential tours.” I met up with Libera, an artist herself as well as licensed tour guide, who briefed me on the city’s history before leading me and my hosts on what may be one of the most engaging tours I’ve ever taken. So much so that I kind of forgot to take pictures! Libera tells Modigliani’s tragic story with a familiarity that demonstrates her research skills, but within a structured narrative worthy of any stage. An augmented reality app helps us visualize parts of the story. I’d say the “Modigliani a piedi” walking tour should be “required reading” upon arrival in Livorno (available in English upon reservation).

Where to stay in Livorno 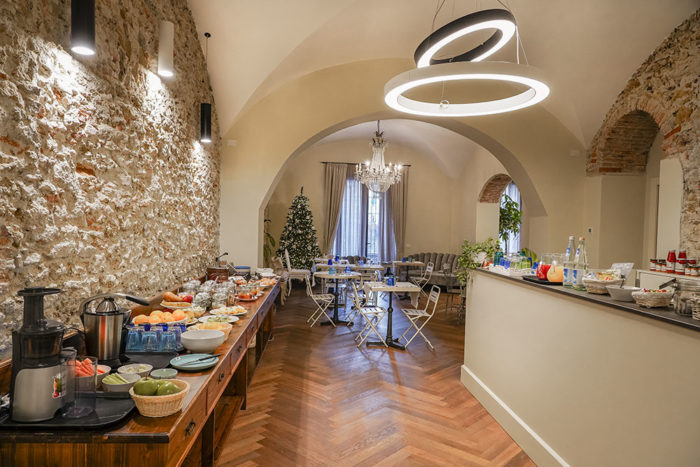 Breakfast at Agave in Città

That Agave in Città is not a typical hotel is clear as soon as you step through its gate that leads you into its historic building. Amongst the merchant homes of Venezia Nuova, this one differed in function: it was a nunnery, though later converted to a private home. After three decades of abandonment, it was bought by Barbara, the current owner, who took on the mammoth restoration task, ridding it of its rodent residents, keeping the building’s bones but rebuilding almost everything. 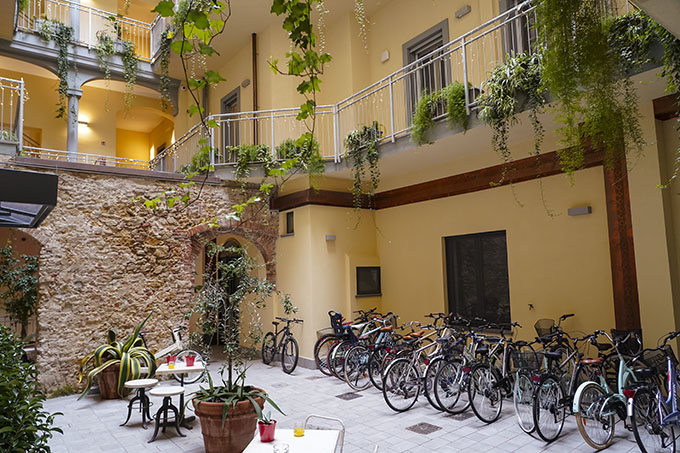 The courtyard, with bikes (free ones are available to the less clumsy than I).

The front gate leads into a charming internal courtyard, with the suites, one- and two-bedroom apartments accessed by outside walkways on the floors above. But this isn’t just a place to stay: the indoor pool, small sauna, exercise room and two lounge areas turn l’Agave into a wellness getaway. I was torn between exploring the historic city and relaxing in the sauna – oh and the private whirlpool on the huge terrace of my suite – making a two night stay a must to fully take advantage of the facilities. Breakfast is also worth a mention: Barbara also owns Podere Agave, agriturismo in the San Vincenzo area, and the Santa Cecilia hotel in San Vincenzo, overlooking the sea, so healthy and organic products, including her homemade jams and olive oil, are on offer.

A little IGTV video I made on my trip

Disclaimer: I was hosted by Barbara and her staff, but all opinions and enthusiasm are my own!