If you’re looking for the perfect day trip from Florence, or even for an alternative base for exploring Tuscany, then head to Siena. The Tuscan town has it all: one of the most spectacular cathedrals in Italy, winding medieval streets, some of world’s finest Renaissance art, the famous Palio races, and even the childhood home of one of Italy’s two patron saints, St. Catherine. 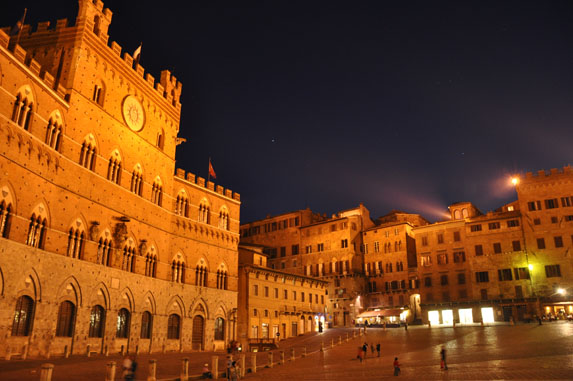 Just one tip: When heading to Siena, you might not want to tell the Florentines where you’re going.

That’s because Siena and Florence have been fierce rivals since the Middle Ages. Like Florence, Siena was a self-governing republic, one made wealthy by trade and banking. During the 13th-century wars between the Guelphs and Ghibellines, Siena and Florence picked opposite sides (something even Dante saw fit to mention in his Divine Comedy). And although, today, Florence gets the glory for being known as the home of the Italian Renaissance, art historians say it’s not so clear: when it came to attracting the most important painters of the early Renaissance, Siena and Florence were neck-and-neck. But in 1554, after centuries of political intrigue and outright war, Florence’s Cosimo I de’ Medici decided to stamp out his rival once and for all. In a battle so decisive it finished in just two hours, he defeated Siena’s military; the besieged city continued to resist the Florentines for another year and a half, but ultimately surrendered.

Want to know how to spend a day in Siena? Here are seven sights not to miss.

What to see in Siena

Piazza del Campo: Start your day at Siena’s main square, one of the most unusual in all of Italy. Shaped like an enormous scallop shell, its design, laid out in 1349, is highly symbolic: The nine sections stand for “The Nine,” or those who governed Siena at the height of the Middle Ages. Don’t miss the Fonte Gaia (“Fountain of Joy”), designed by Jacopo della Querica, a famous Sienese sculptor, in 1419. As you gaze at the piazza, imagine 10 horses racing around it: This is where the Palio takes place! 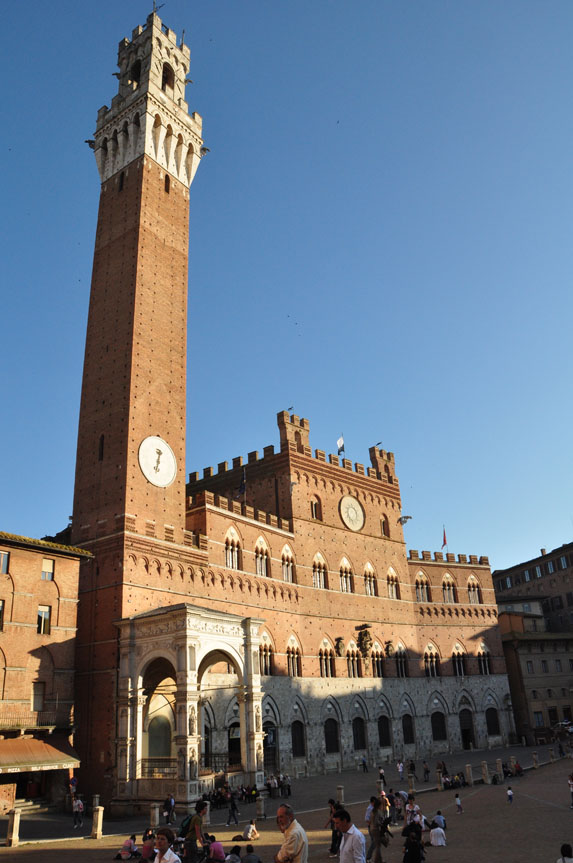 Palazzo Pubblico: The town hall looming over the Piazza del Campo, Palazzo Pubblico is unmissable for its tall tower. The tower, called the Torre del Mangia, was built in the 14th-century to be taller than the tower in—you guessed it—Florence. Head inside the palace to explore its opulently frescoed rooms, the most famous of which is the Sala della Pace, where Ambrogio’s Lorenzetti’s world-famous frescoes of “Good and Bad Government” grace the walls. One of the early Renaissance’s masterpieces—and rare for dealing with secular, not religious, subjects—the allegorical frescoes show the Renaissance’s humanistic impulses at their finest. 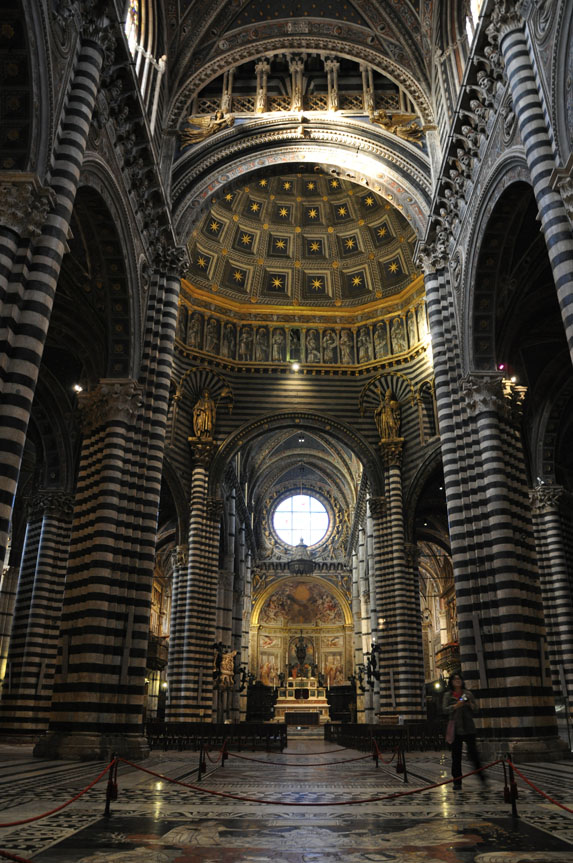 Duomo: Feeling “churched out” from your Italy travels? Step into the Cathedral of Siena and you’ll forget your fatigue. Built in the 13th century, the Duomo is a feast for the eyes, as well as a kind of living art museum. Everywhere you look, there’s a priceless piece of art. Like not one, but two, bronzes by the famous Donatello, including his renowned St. John the Baptist. Or four sculptures by Michelangelo in the Piccolomini altar, done when he was in his late 20s. Or Nicola Pisano’s elaborately-carved pulpit, dating to the 13th century. Or two sculptures by Bernini, the Baroque master, who also had a hand in the cathedral’s later architectural designs. Or the stunning, inlaid-marble floor, with 56 different scenes from the Old Testament, sibyls and allegories, started in 1372 and finished in 1547. (The floor is covered most of the year, so check ahead of time when the floor is uncovered—generally in September—if you want to make sure to get a look). The list goes on. 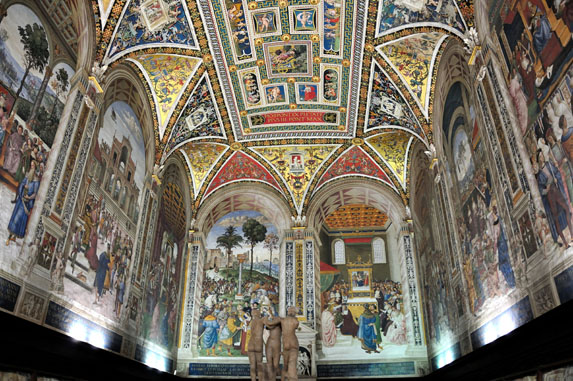 One must-see is the Piccolomini Library. Frescoed in 1502-1503 by one of Italy’s most renowned painters, the Umbrian painter Pintoricchio, the library’s walls boast vibrantly-colored scenes from the life of one of Siena’s most famous sons: Enea Silvio Piccolomini, or Pope Pius II. Some of the designs for the frescoes may have come from none other than Raphael, who supplied some of the preparatory studies for the frescoes.

Baptistery of St. John: The Battistero di San Giovanni, as it’s called in Italian, is just down the stairs from the piazza of the Duomo. Peek inside to check out the lavish, 15th-century frescoes on the walls. But the real draw is the baptismal font: when it was created in the early 15th century, nearly all of Italy’s major sculptors had a hand in it. Donatello created the panel of Herod’s Banquet and two of the statues; other artists included Lorenzo Ghiberti (the same sculptor who designed the famous “Gates of Paradise” for the Baptistery of Florence) and the prolific Sienese sculptor Jacopo della Quercia.

Museo dell’Opera del Duomo: This manageably-sized, but extraordinary, collection includes not only many of the sculptures taken off the façade of the Duomo for safekeeping, but the crowning masterpiece of Duccio, one of the most important Italian artists of the late 13th and early 14th centuries: the lavish, and moving, Maesta’.

The “new” cathedral: If you want a picture-perfect view of Siena, make the climb up the eerie “new” Duomo, which was started in the 14th century and never finished. 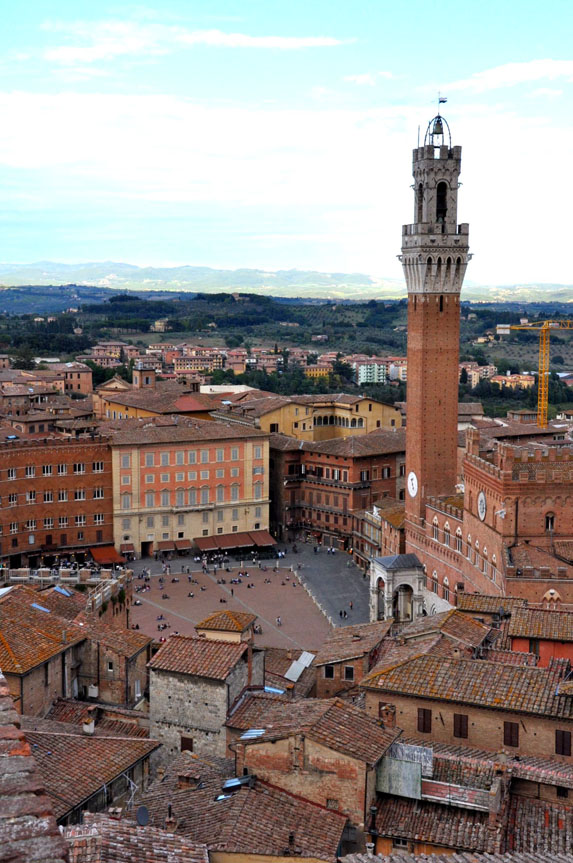 Siena seen from above

Basilica of San Domenico: Near the childhood home of St. Catherine of Siena, this austere, Gothic church has some artistic gems, including paintings and frescoes by Sodoma and Lorenzetti. But the biggest draw—and either the holiest or the most gruesome, depending on your point of view—must be the basilica’s relics of St. Catherine. The church has her thumb and head, and yes, both are on display.

Writer and journalist Amanda Ruggeri blogs for Walks of Italy, a travel company that offers walking tours, day trips and authentic experiences across Italy, including in Siena.

Writer and journalist Amanda Ruggeri blogs for Walks of Italy, a travel company that offers walking tours, day trips and authentic experiences across Italy, including Siena. On her personal blog she also writes about tips, tricks and things not to miss in the Eternal City at Revealed Rome.