Why I Started Drinking Wine at Age 40

A few months ago, I found myself amongst 50 or so aspiring sommeliers in a course ran by a Florentine association and partially funded, believe it or not, by the Italian Ministry of Agriculture. The first level course would provide basic information about winemaking techniques and zones as well as teach us how to taste wine properly and pair it with food. After a brief introduction about how these nine sessions would increase and refine our passion for wine, the teacher quipped, “I can’t imagine there is anyone astemia in the room” – any non-drinkers.

I didn’t raise my hand to correct him, though I hesitated, thinking perhaps I ought to. Until just a few weeks before, I had been a non-drinker. Indeed, for my whole adult life, I have been astemia. In English the closest translation of the word is “teetotaler,” which, if used outside of Great Britain, causes quizzical looks because nobody has any idea what it means (and if they do, they still think you’re crazy). Signing up for this course marked the end of my teetotaling life. I realize that a lot of people try to stop drinking, or to drink less, and my making great efforts to start drinking is both unusual and laughable. Yet for me, it’s an epochal change, one that required confronting fears and re-evaluating my image amongst my friends. 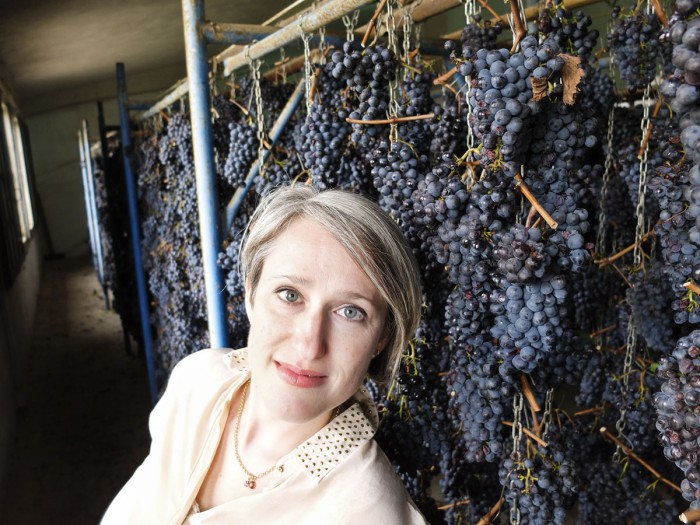 Me, getting excited about the grapes hanging to dry in a Vinsantaia (at Il Borro, Valdarno, Tuscany)

I tend to make decisions and stick with them. At times, this can make me tough to deal with, but it has stood me in good stead and helped me get through some tricky times, like through graduate school, which takes a good deal of persistence indeed. So, one morning in 1994, I uttered five words that many of us will also have said, perhaps more than once: “I will never drink again.” Being a woman of my word, I didn’t. From that moment on, I never had a drop of beer, which I find disgusting anyway; I never had a drop of hard liquor, which really just exists to get you drunk; I never toasted with Champagne at special occasions; and, until this year, I had not touched a drop of wine.

No wine, you say? But you live in Italy! In Tuscany, the land of Chianti! After seventeen years of expat living, I guess being here has worn down my resolve, in part because I realized that there was no good reason for that resolve. Turning forty, I decided to make some changes. The first was to stop dyeing my hair blonde: it turned out that after years of blonde streaks, my hair had been carefully trained to do this by itself, and has revealed platinum streaks that every one thinks I paid for. The second resolution was to start drinking.

This is not a decision to be taken lightly, and I mean no disrespect to those trying hard to stop. The idea actually came up because of my job. Amongst my many hats, I write content for social media. This requires understanding whatever your client offers and breaking it down into storytelling sound-bites. Two of my clients are hotels with wineries and restaurants. To tell their stories, I could sleep in their beds and write about them. I could eat the food, and write about it (even without eating meat). But when it came to the wine, I was being superficial, basing myself on what others had written but not knowing it inside-out myself.

You can only make things up for so long before both curiosity and professional integrity get the better of you. So I approached a glass of red wine. Something like how a lizard might approach a pond: picture a hesitant hover, and then a tongue, quickly dipping into the liquid. And then a pause, to see what effect it had. This was not a simple wine tasting; this was a test to see if the wine would hurt me. The fact that I seemed to be okay with it came as quite a surprise.

I had been assuming, for many years, that I was allergic to alcohol in some way, certainly to wine, perhaps to its sulphites. My last attempt to ingest wine had resulted, after a few sips, in a terrible head and stomach ache. So the fact that this lizard-like sip did not cause apparent damage was a pleasant surprise, though it didn’t rule out that a larger drink would do so. I am allergic or extremely sensitive to so many foods that eating or drinking anything new and unknown generates a quite logical fear of unwanted consequences. To be honest, new things in general are not my favourite. But I realized that, for a long time, I have based my choices on what others have told me are the causes of my digestion problems, rather than on empirical fact. Requiring more data, I tried a bit of wine again, somewhat in secret, for not drinking was such a part of my persona – along with being vegetarian, allergic to garlic, and a type A personality – that I wasn’t ready to reveal the change until it was definitive. 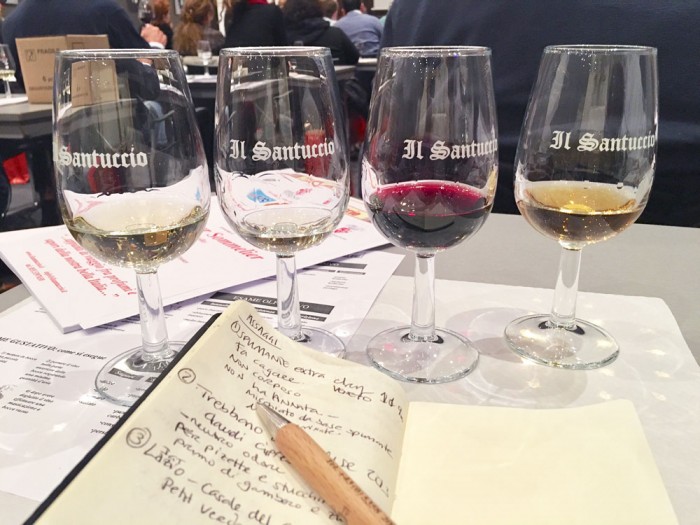 My mother always said “if something’s worth doing, it’s worth doing well”. Maybe it’s for this reason that I don’t tend to take half measures. So I’ve chosen to go back on my word, and instead of not drinking, I determined to approach drinking – wine, at least, for I still think beer is disgusting – with the intellectual rigour that got me through the PhD in art history. It has to be good wine. I will not drink plonk with pizza. If the wine doesn’t pass the smell test, I won’t even taste it. But if it’s a valorous vintage, I want to know more about it.

I decided that I wanted to know more about what has made this place in which I live so famous. I was initially attracted to Italy by the art, the particularly good food, the charming old people and the beautiful landscapes that I frequently photograph. But for a lot of people, Italian wine, and particularly Tuscan wine, is a big draw. It’s something I couldn’t understand before, and now I realize I was missing part of the picture.

The course I took was really basic. While it purported to cover most of the content examined in the more rigorous, internationally recognized first-level sommelier classes, I ended up learning more on the job just by observing and writing about the cycle of the vine and the cellar. But what it did provide was a regular opportunity to try some wines and the confidence to sip ever increasing amounts, as well as to tell bad from good. This was the first of three levels, and I don’t plan to continue with formal training. I do plan to continue exploring the world of wine by tasting everything I can, by attending local events and by visiting winemakers in Tuscany and beyond. The teacher on the first day was right: the course did increase my passion for wine. I’m no expert, but at least I’m not astemia.

I told this story orally on October 15 at Storytellers Rome, along with more talented storytellers than I. This brilliant event is held usually the second Saturday night of each month at The Beehive, which is also a clean and friendly hostel that I recommend! If you’re interested in participating in this free event, or telling a story, look for the Facebook group “Storytellers Rome”.