The New Botticelli Rooms at the Uffizi

Known to Uffizi regulars as “rooms 10-14”, The Botticelli Room was a large single space containing the most important works by the artist (The Primavera and the Birth of Venus), numerous Madonnas, and the Portinari Altarpiece by Hugo Van Der Goes. Closed for exactly one year for a renovation sponsored by the Friends of the Uffizi, the room has just been presented to the press. Or it would be better to say “rooms”, plural, for the previous space has been divided up! 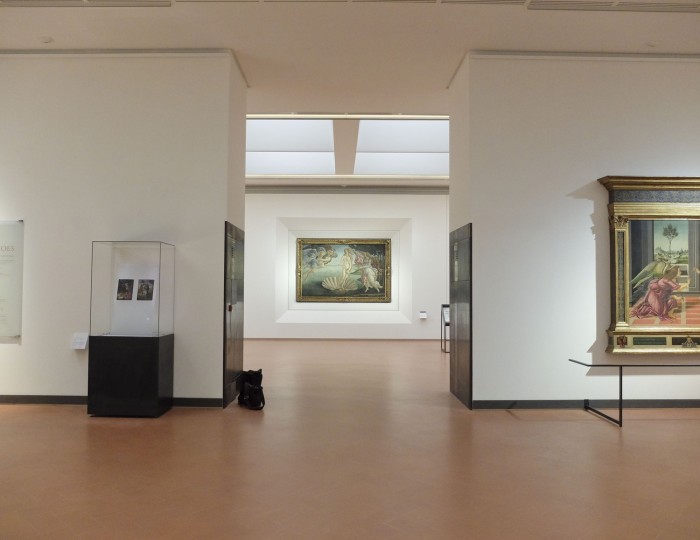 The Birth of Venus now has a different point of view

Work on the new rooms numbered 9 through 15, hosting the Early Renaissance paintings including Lippi, Masaccio, Paolo Uccello and Botticelli, is now complete, constituting a major part of the “Nuovi Uffizi” project. The new display is optimized for visitor experience and for the safety of the paintings. Let’s take a closer look at the Uffizi Botticelli Rooms as we will come to know them from now on.

The large room “10-14” now has a lower ceiling and has been divided up into two spaces. This is a lowered, false ceiling holding lighting, ducts and other service elements. The new “wings” or dividing wall not only increases the display surface available but also houses the air intake ducting for the air conditioning and heating system and the two totems containing electrical and special equipment. Had the room remained one open space with the lower ceiling it would have seemed too low. I asked architect Antonio Godoli about the choice, which I think is a huge break with history, and he said that the idea to divide up the room was already considered in the 1980s, and was made necessary now by the lowered ceiling. 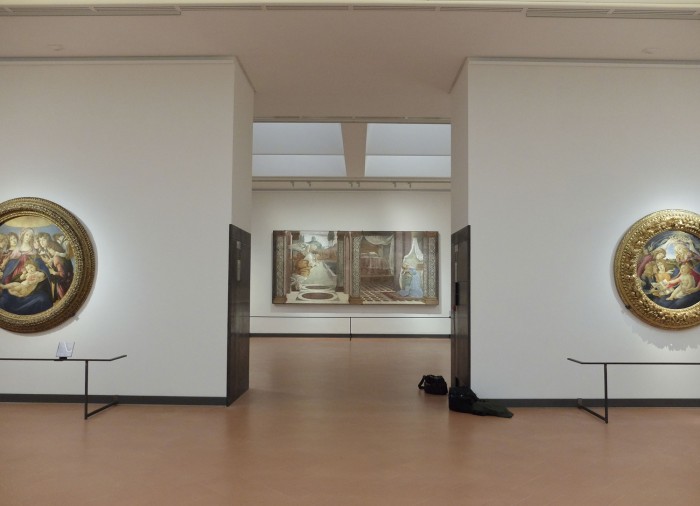 The new lighting installation in this room and the adjacent corridors also makes a huge difference and brings the gallery up to par with Europe’s greatest. It comprises state-of-the-art LEDs built into a “DALI system” for the planned management of the various light sources providing indirect, diffused light from the surfaces of the painted vaults, direct and constant light on the walls, and accent lighting on the sculptures  in the corridor with spotlights highlighting the most significant pieces. Put in layman’s terms, the light indoors now adjusts depending on that outdoors, and also properly filters UV from the outside.

The most significant works have been distanced from other works in the rooms, creating two focal points that have enough space around them for large groups to gather. They have been set into the walls, with the glass discreetly placed at wall level, so that there is no need for the metal brackets that hold the glass in front, and also no need for security barriers at shin-height. They add an additional frame and highlight to the works. 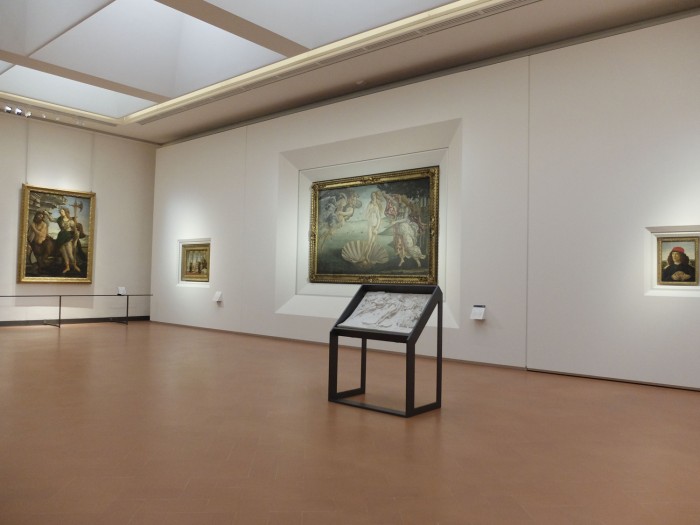 A view from one corner

Unfortunately, the old leather-covered benches that used to be in the center of the large room have been removed; it is too bad that visitor numbers are simply too high to create these areas for rest and lengthier contemplation of some of the most important works of art of the Italian Renaissance. With the current layout, seating would interrupt flow in a space that is guaranteed to become very crowded despite the architects’ best efforts.

The list of Botticellis on display has been supplemented by the arrival of an Annunciation painted for the Hospital of San Martino in Via della Scala in Florence. The painting, a fresco almost six metres wide which Botticelli painted in 1481, has been hung in the first part of Room 10–14, in juxtaposition with another painting of the same subject, on wood, which Botticelli painted for the church of Cestello almost ten years later, creating an excellent opportunity for comparison.

The Annunciation fresco is a new addition

Botticelli’s secular works – the Portrait of a Man with a Medallion of Cosimo the Elder, the Calumny of Apelles and Pallas and the Centaur – have been hung in sequence around the Birth of Venus in the second half of the room, allowing even the non-specialist visitor to appreciate at a glance both the extraordinary scope of Florentine humanist culture and Renaissance art’s debt to classical antiquity. Indeed, the new layout makes it easier to see the less famous works, which previously were displayed too close to the masterpieces that attracted crowds, often blocking our access to them. 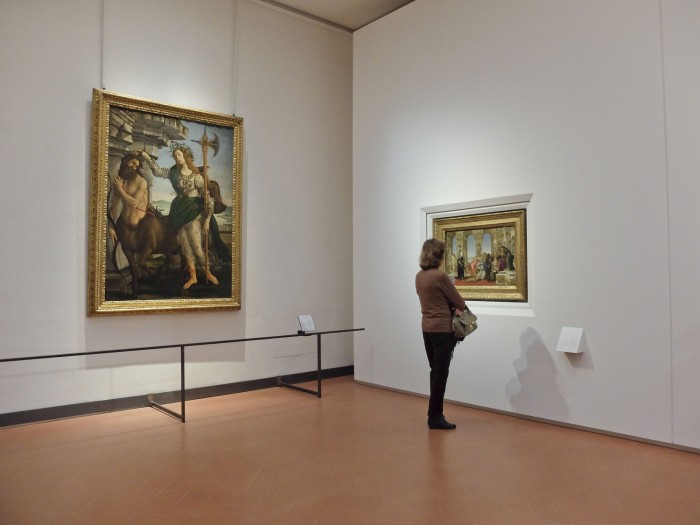 Another big change is that the Hugo Van Der Goes, painted for the altarpiece of the church in the Hospital of Santa maria Nuova has been moved to room 15. Here it’s better juxtaposed with Botticelli’s Coronation of the Virgin, and with a Ghirlandaio Madonna and Child which helps contextualize the Northern work, showing its great influence on Florentine artists. 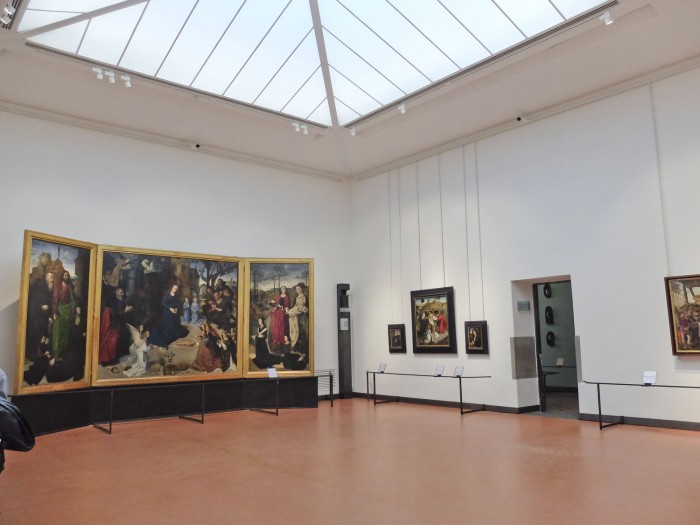 It’s always hard to embrace change, and if I’ve had my beefs with the experience of art in the Uffizi, I’ve never found anything wrong with this big and airy room, although there’s no question it got too crowded, and the old green glass in front of the masterpieces was tremendous. But as it turns out , the space is actually one of the most recently constructed in the building, and as such there is no historical reason to maintain it unchanged: its last overhaul dated to 1978, when the ceiling was effectively raised (some upper level divisions were removed). I will have to warm up to this new solution. I love the new lighting and the way the masterpieces are protected. But the division of the room into two will take getting used to; for me it makes it too much like the other rooms and like any other museum. What seemed like such a huge room seems much smaller now – it took me a while to figure out that I was in the same space. On the other hand, it is a clean and logical ambiance, more in line with the rest of the museum, so I’ll have to trust the experts that made this decision! 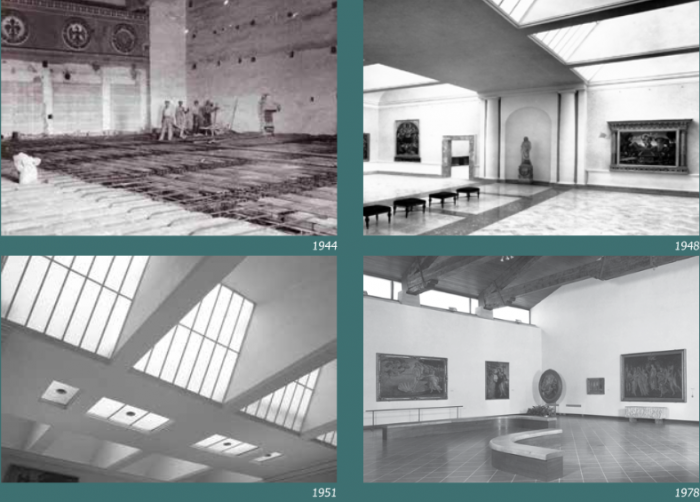 The renovation has benefited from a generous donation from the Friends of Florence, a not-for-profit organisation which raised the entire sum required both for the lighting and layout of the rooms and for restoring the paintings through a fundraising campaign among its US members that took only six weeks. This act of generosity, as Simonetta Brandolini d’Adda, the foundation’s chair, pointed out, once again strengthens the historic tie binding the interests of American culture to Florence’s historical heritage.

Meanwhile, the construction of the Nuovi Uffizi progresses apace and the Galleria degli Uffizi will shortly include specially designed areas in the new zone set aside for temporary exhibitions. This latest renovation is the last of the interventions on the permanent collection, which over recent years has been spread from the nucleus of 45 rooms over 101 rooms (currently open). With the restoration of the two floors beneath the Biblioteca Magliabechiana and the construction of a new area providing a connection with Vasari’s original building on Piazza Castellani, the gallery will enjoy new opportunities for exhibitions and better visiting conditions for the public. The government has already set aside 18 million euros for the project, which are already beginning to be spent, while an additional 40 million are required and have been requested to complete it.