I love a good book. A good book grabs you, pulls you along and doesn’t let you out. Recently I read Across the Big Blue Sea: Good Intentions and Hard Lessons in an Italian Refugee Home and I couldn’t put it down. This book tells “tough truths” about the refugee experience in Italy, from the point of view of an expat woman who finds herself managing a refugee home in small-town Tuscany. In so doing, it addresses our own preconceptions about refugees and immigrants everywhere.

The author is Katja Meier, who happens to be an acquaintance of mine thanks to our shared love for the Maremma. I know her as a writer (she has a few blogs) and as a hiker (she’s Swiss, I’ve said enough!), a cool mom and a gardener, a life coach and a herbalist. I should have known she had even more tricks up her sleeve. 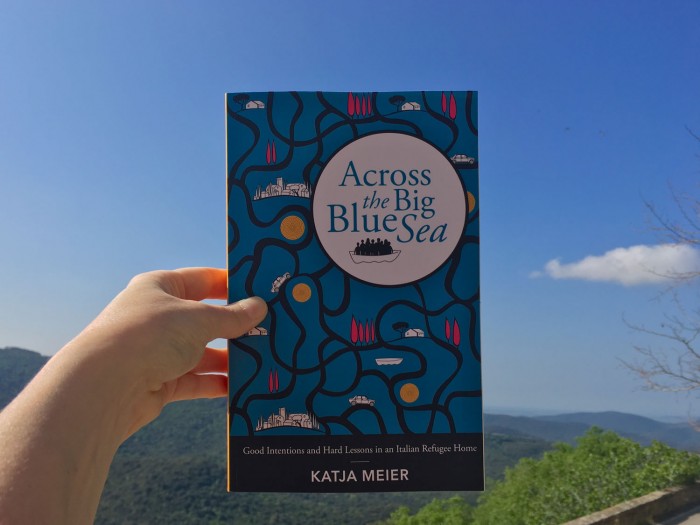 The book, in Maremma (where it takes place). If you look closely you can see the “Big Blue Sea” in the background.

Although she never shared anything about it on social media (where, face it, we get most of our news about our friends), in the Summer of 2014 she was asked by a local charity, who ran a womens’ shelter where Katja had volunteered, if she could help with incoming English-speaking refugees. They were preparing for the much-touted Syrians (only one family showed up, at one point, but they had no intention of staying in Tuscany), and Katja’s main perceived qualification seemed to be that she spoke English, a rare skill in this rather remote part of Tuscany.

Shelters like this are commonly run by NGOs or small local charities and located in empty schools—many of them available in Tuscany’s overaged villages— or in former hotels. Considering the stalling economy and the dwindling number of Italian tourists, opening up to refugees is a valid financial alternative for an empty agriturismo in the Tuscan hinterland. Charities receive a price per head, per night; managed frugally, they may find themselves with a profit.

Rather than Syrians, Katja found herself caring for Nigerian women. Between eighteen and twenty-three years old, the young women had survived the crossing of a dessert, countless months in war-ridden Libya and the passage of the Mediterranean Sea on a battered and madly overcrowded boat. Saved by the Italian coastguards, they were taken to Sicily and a few days later transferred to the refugee home in Tuscany. Finally, they were safe, had food, a bed, and clothing – as well as silence and a great view. But the location, while idyllic, is hardly conducive to integration and to the newcomers getting a job. These are towns emptied of young people, and populated by the aged, waiting out the end of life while gossiping at Bar Sport. These places become places to wait for the refugees as well, waiting for their asylum request to be processed by the Questura in Florence; they end up idle, while the locals start to think they’re lazy.

Katja says “I started my job at the shelter grateful that I was able to do something more hands-on than sharing Refugees Welcome posts on Facebook. I had the best intentions and lots of great ideas for this new work project – and not the least idea what I was getting myself into.” She makes plans and invents programs for literacy, yoga, employment, you name it… and finds her best ideas fail. She reevaluates her ideas, ideals, and perhaps herself.

Somehow, she managed to go with the flow, dealing with the craziness that came her way and the many challenges as best she could, with no administrative help and, in true Italian style, none of the promised pay. She sticks with the “job” for as long as is humanly possible, but this book is her tell-all. She has written the story down with clever dialogues and characters that are so well fleshed out they could almost be fictional.

“Much literature about black people is written by white, middle-class people,” she pointed out recently in book presentation in Florence, to an audience of white, middle-class people. “At first I hoped that the girls might tell their own stories. But I quickly realized the difficulty of this idea… Some of them could not even read and write. But mainly, they were not concerned with telling their stories. They wanted to find work.”

Not one to profit from others’ misfortunes, Katja thought carefully about if it would be ethical to write this book herself. In order to be accurately tell these womens’ stories, Katja did a lot of reading. She read about Nigerian geography, history and culture in order to understand where the women were coming from (she found that there were huge differences between different regions of the country). She read up on sex workers, which many young Nigerian women become, and did her best to keep her charges out of this field. Early on, she started taking notes about people and experiences, thinking she might do something with them, but wasn’t yet sure what.

In telling the story of the five refugees in her care and the adventures they have together from her own point of view, Katja addresses preconceptions about what new arrivals in any country “must want” and “how they should act”. She questions the double standards that apply to the Nigerian girls in contrast to her own experience as a Swiss immigrant to Italy. For example, she takes them to a party, hoping the girls might make connections to find employment, and then is dismayed when they get totally wasted, despite that fact that all the Italians and expats there also drank a lot. One easily forgets that they are young, only 18-23 years old, and that they want what other young girls want. They haven’t had an education or many positive examples, but they see models and rappers on TV and social media and aspire to that, not to becoming a cleaner in a hotel. Tough realities to face, but after what they have been through, who could blame them for dreaming?

This book is not a work of fiction. There is no happy ending, nor a neat one. But the experience recounted in it changes Katja’s life, and reading it, a small bit of this rubs off on us.

Find out more, and listen to the soundtrack, on the official website www.acrossthebigbluesea.com

For purchases in the USA or on Kindle, click here.

I haven’t always been participating in our monthly Italy Blogging Roundtable, but wanted to pitch in when Katja suggested we write on the topic FOREIGN, inspired by the themes of her book. Here is what my fellow bloggers have written!