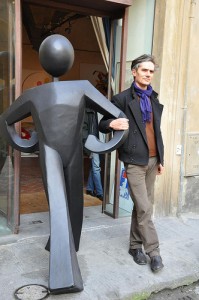 Clet poses with the original of his “Uomo Comune” sculpture

I recently interviewed Clet Abraham, Florence’s most popular street artist, for The Florentine. You can read the article “Clet: The man behind the stick figure”, but here I just wanted to give you a little behind the scenes material.

I’ve written about Clet’s two major interventions on Tuscany arts – the street signs and the sculpture on the bridge. Now, with the backing of a print newspaper, I felt comfortable asking for an interview in his studio. I also booked an appointment with Guiliano da Empoli, Superintendant of Culture (Assessore) for the city of Florence, to ask him what he thought of Clet and of street art in general. His, and the city’s, voice has been curiously absent in all the articles I’ve read about the artist, so I was pleased that he agreed to talk about this subject and release a statement for print.

People have been asking me what kind of a guy Clet is. The photos of him hamming it up with his own art pretty much speak for themselves. I can say he is very nice and down to earth, modest and rather embarrassed about all this attention. He’s not a young rebel nor in any way disrespectful to the city, nor does he have crazed ideologies or pretenses. 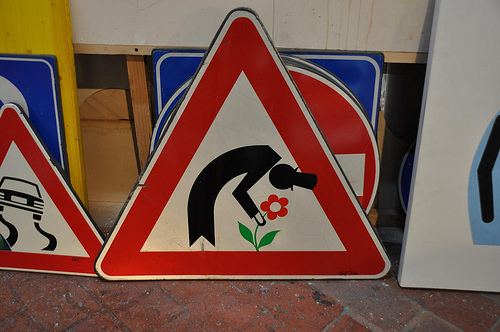 As my article in TF focused on the social aspects of this work and how we might resolve street art with preservation issues and administrative regulations (most of which are there for good reason), I didn’t get to expand much on the meaning of Clet’s work, something that we did talk about, and that he seems to have wanted me to write down. He later wrote me an email with some further reflections on what he’s doing, which I translate and publish here.

I do have something to say, and – being an artist – I can best say this through a work of art. But I’ll try (in words). The Common Man statue is intended as a stimulus to take an important and risky step. It represents one of those moments on one’s life in which one needs to make a decision even not knowing its consequences (the void below him is this unknowingness). So Uomo Comune decides to take this step, and invites everyone to do it. The irony lays in being part of this dangerous spectacle from the safe side of the railing. The act is permanently frozen in limbo, being a sculpture that doesn’t move and will never finish stepping out, and so will never know if his choice was the right one or not – the only way for us to know is if we were to try it ourselves.

The provocation here is having installed him without permission, which involves a choice: I, personally, do want to take a step. If you want to journey with me, leave up this symbol of intention; if you remove it, to me it means that you don’t have any intention of moving ahead because you don’t have the courage to take risks. So the real artistic act is composed of various intrinsically linked components: location, object, and intervention; it’s not a simple sculpture, the form of which might be up for discussion.

With thanks to Clet for his time, and wishing him best of luck for the future. I see great things.