Fantastic Flowers in Florence and When to Find Them

Spring in Italy is heaven for lovers of flowers and hell for allergy sufferers. Despite having to drug myself with Claritin, I positively woop with joy when I see the first buds of… anything! I love spring! I love the way every year, it seems truly miraculous how everything blooms, from base flowers on weeds to the most spectacular of cultivations. Despite my allergies, I stick my nose in everything like a little bee. Florence isn’t quite as green as I’d like it to be, but it offers a few amazing historic parks that, at specific moments, present spectacular flowers. Here’s the best of the flowers in Florence and when to find them! 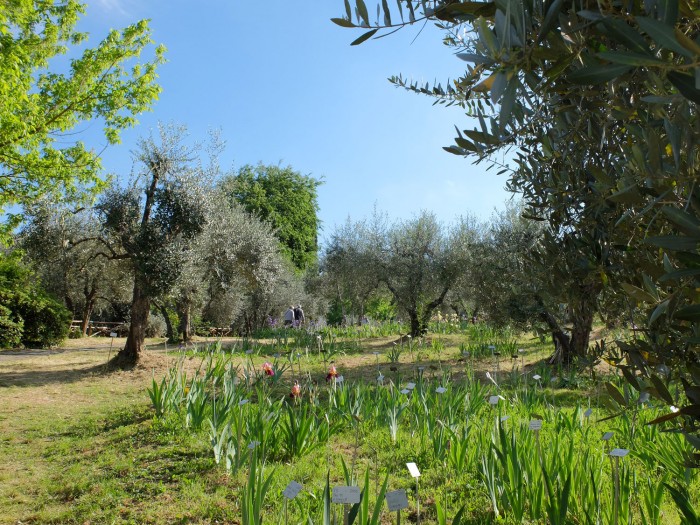 The iris garden from a quiet-ish corner

One of the first signs of spring happens punctually at the beginning of March with the blooming of magnolia trees. Their spectacular buds and intoxicating fragrance are particularly jarring against the otherwise nude backdrop of the tree and everything around it. The most photographed specimen of this tree in Florence is in Piazza Beccaria.

When everyone goes crazy with #wisteriahysteria, in Florence that’s strongest at the Bardini Garden (accessed through Villa Bardini museum – residents can visit the garden for free). There is a wisteria tunnel that gives it all for just two weeks in the middle of April. Get there first thing on a weekday morning (it opens at 8:15) if you want a shot at being alone in it. I found the few people present to be respectful of the desire to capture it on “film”. 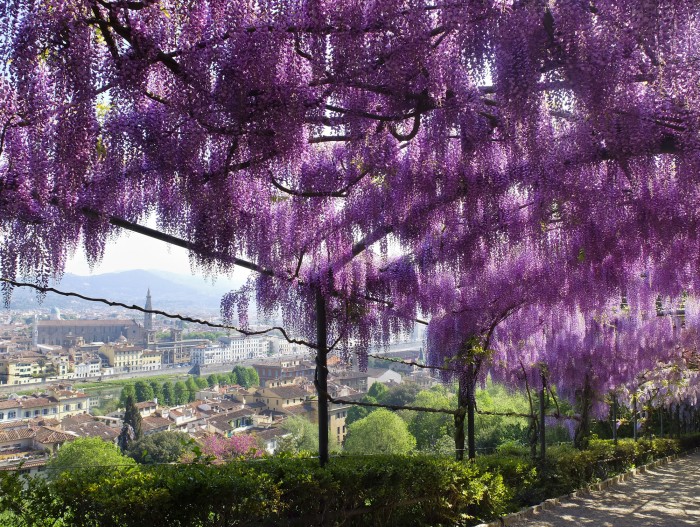 Wisteria at Bardini Garden with view of Santa Croce, April 14, 2017

If you miss out on the wisteria, fear not – it’s still a brilliant garden to visit. The tunnel is bordered by numerous species of hydrangea so there’s some reward for showing up later in the summer. Also, the structure of the garden itself includes an impressive Baroque staircase and a pleasant viewing platform from which to see over the city. 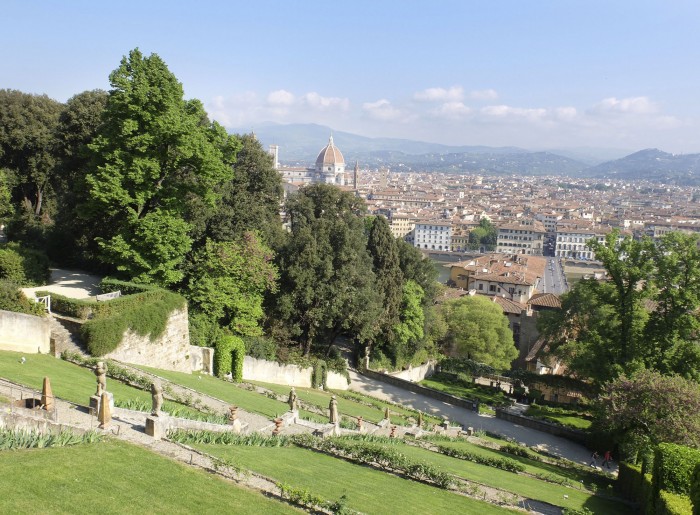 The Iris Garden is located just below piazzale Michelangelo and is open for less than one month each year. The 2017 opening dates are April 25 to May 20. This year, early heat seems to have caused the flowers to bloom in advance and we’d hoped to visit on Easter weekend, but it wasn’t open yet. I guess they don’t have the flexibility or funds to open it at other times – too bad, as it’d add significantly to the city’s available green / picnic space. 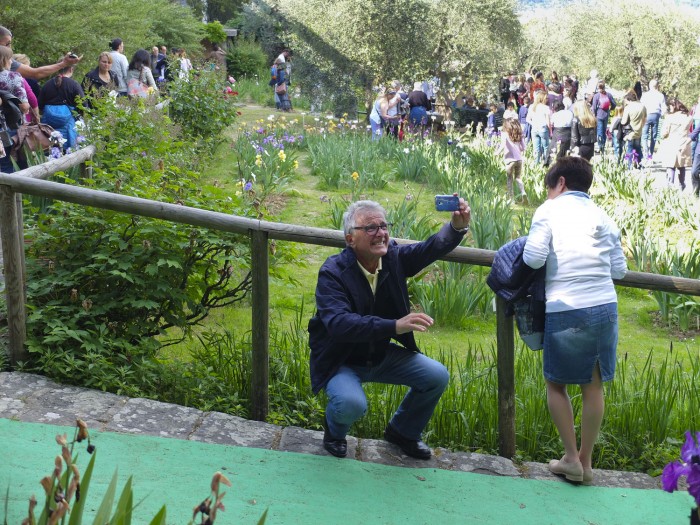 This guy was not the only person trying to take a selfie in the iris garden.

The Iris garden was established in the 1950s as a space to hold an annual iris competition, and has grown every year since then, collecting specimens from all around the world. In the short time it’s open, the garden draws major crowds, but rightly so, given how unbashedly beautiful all the flowers are. 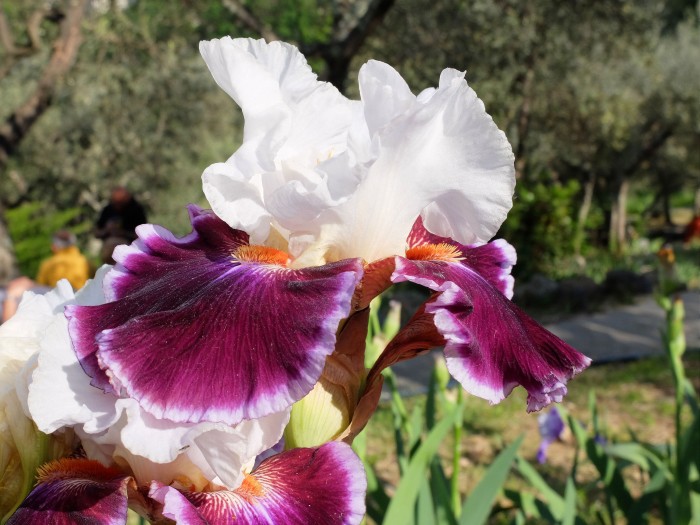 Just one of the exemplars of amazing irises.

The rose garden is everybody’s favourite place for a picnic overlooking Florence. Sadly, only at lunchtime, since this place closes before summer sunsets. We were there on Easter Monday this year, just us and about 3000 other people. Made good use of our rather durable little wine glasses from our sommelier class this past winter. So much classier than drinking from the bottle.

I love the rose garden not only for the flowers but for the whimsical bronze sculptures donated to the city by the widow of the artist Folòn – a resting cat amongst them. The sculptures frame the landscape and make the park pretty to visit even in winter, when the flowers aren’t blooming. 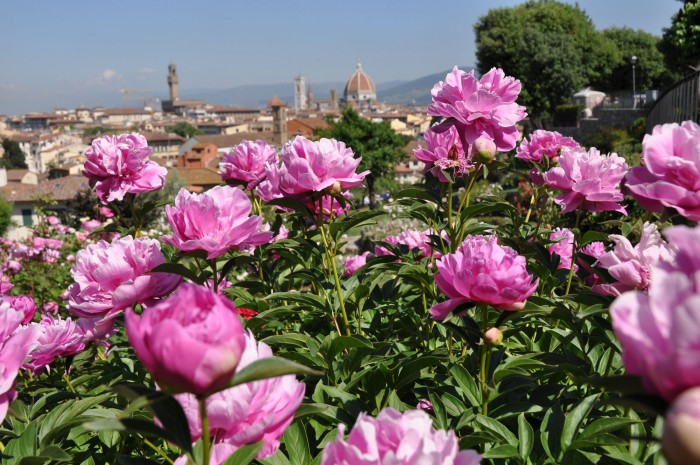 Florence’s Rose Garden frames the landscape (photo taken in 2011, there has been a crane in this view ever since)

Towards the bottom of the garden is a Japanese garden area that is truly unique. The Rose Garden is open year-round from 9am to sunset (considered 6pm even when the sun sets at 8 or 9pm). 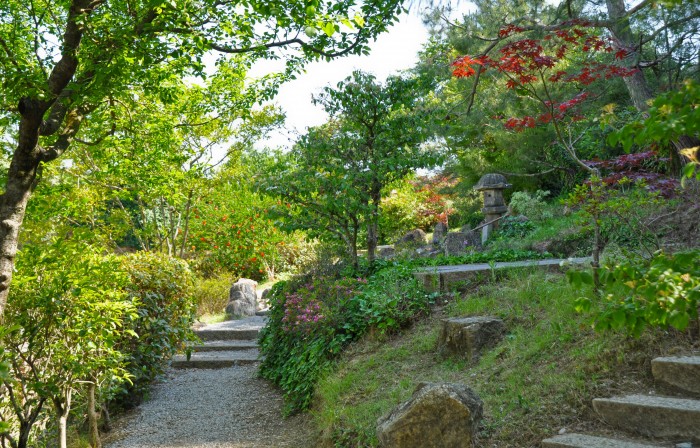 The Japanese Garden at the bottom of the Rose Garden 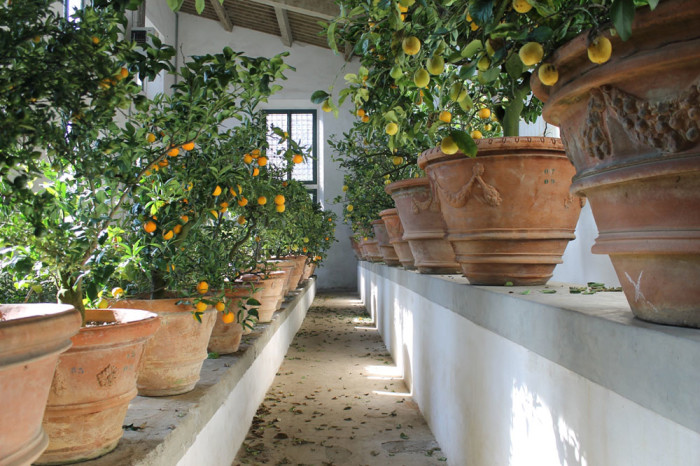 Lemons in the Limonaia at Boboli Gardens

The historic Limonaia building at the Boboli Gardens houses, you guessed it… lemons! The Limonaia at Boboli was built between 1777 and 1778 upon commission of Pietro Leopoldo di Lorena by the architect Zanobi del Rosso. The building was necessary to house the hundreds of citrus plants that are placed around the garden between May and October during the winter months, and it is still used for this reason. The plants are outside, nearby and further around the Boboli Gardens, in the summer months. Occasionally, the limonaia has special openings allowing you to find out more about the special citruses inside (see this article from 2014).

Have I missed any spectacular flowers or parks that house them? Share your secrets in the comments below!