Brunelleschi’s building in Piazza S.S. Annunziata is easily recognized by its majestic portico, a series of round arches punctuated by roundels of swaddled babes by the Della Robbia family. But many visitors to and even residents of the city do not know much about its function. This article covers the history of the Innocenti as an institution. 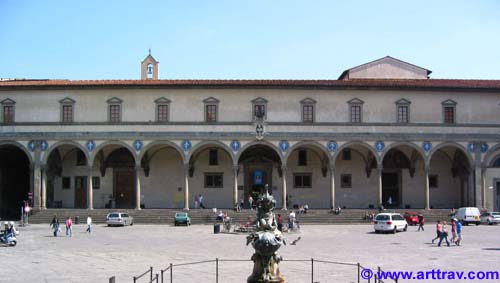 The building opened its doors as a foundling hospital, the ancestor of the modern day orphanage, in 1445. This was in response to the city’s problem of infant abandonment, which had recently come more to the patricians’ attention, not in the least because often, abandoned babies were products of the servant-master relations of these same patricians. Unwanted babies were often exposed to the elements or drowned. The city responded to this terrible fact mainly because of the concern for the unbaptised souls of the children. The Institution of the Innocenti sought mainly to remedy this problem.

The portico, or loggia, by Brunelleschi was begun in 1419. The construction of the orphanage was financed by a sum left in the will of Francesco Datini (the famous “merchant of Prato”), though also by the silk guild and the Commune of Florence. Public structures for the poor and helpless were one of the proper ways to spend money in Renaissance Florence: a humanist text by Matteo Palmieri (della vita civile) says:

Those who have some natural defect of illness or of age… deserve public subsidy… If they are small children, their preservation is at stake… for the future comfort and betterment of the common wealth.

The institution was for common good, and it contributed to civic pride. The importance of a beautiful facade by a prominent architect, Brunelleschi, can be linked to this matter. The loggia, which for the first time incorporates a rational system of architecture based on the ancients, is an important monument in the development of Renaissance architecture, and a matter of pride for the Florentines. 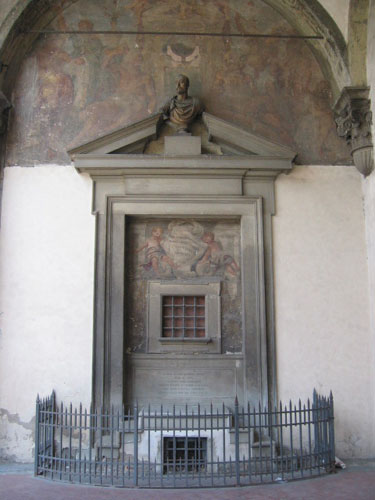 The ‘ruota’ at the Innocenti

For the first two centuries of the Innocenti’s operation, children could be left anonymously in a basin placed inside a window underneath the portico (see photo). In 1660, this original entry was closed and replaced by an entrance at the left-hand side of the portico, which can be seen now. In both cases the child immediately passed into the relative safety of the hospital, while the identity of the parent or “agent” leaving the child would be (theoretically) protected (although my reading of the archival documents reveal that often they were spied upon by internal staff).

When a child was brought in, the staff immediately recorded pertinent information in a large book for that year. All subsequent information was written on the same page, including whether the child died or was reclaimed by its parents. These records still exist in the Archivio degli Innocenti and provide an important historical record for scholars.

Florence was not the only city with a foundling hospital, though it was one of the first. Over its hundreds of years of operation, thousands of babies were left there for mercy. The original intent of the institution was to place the infants under the care of wetnurses and raise all the children for productive lives in society. In the first years of its operation, this was marginally possible. The death rate of the “innocentini” was about 30%, which was only slightly greater than the rate for children in society at large (a surprising fact for us, but due to lack of medicine and hygeine). As the number of babies at the institution swelled, however, they were not able to feed the children due to the difficulty of hiring wetnurses willing to work there. 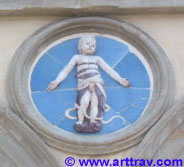 Wetnursing was the practise of all wealthy and middle-class families; children were usually sent into the countryside to be nursed while the mothers were able to become more easily pregnant again. The problem with this system was that the woman taking in someone else’s child had to have enough milk for the “guest”, either by nursing two babies, or because her own child had died. Often, children were abandoned at the Innocenti because women wanted to take on a (well-paying) wetnurse job, so that the institution actually contributed to its own problems. Infectious diseases were also rampant. In later centuries, many babies arrived already with syphillis due to being the offspring of prostitutes, and this was transmitted to the women breastfeeding the child, so again, it was a vicious circle. In some years of the nineteenth century the death rate was around 90%.

In the twentieth century it is too bad that Mussolini survived his stay there (yes, he was an Innocentino too). The institution closed its doors soon after the permanence of this illustrious tyrant, though to this day the “Casa dei Bambini” still operates there with limited functions for the temporary lodging and outplacement of babies who cannot be cared for by their parents. There is also a daycare centre, an archive, and a two museums in the building.

Museum of the Hospital of the Innocents (MUDI) 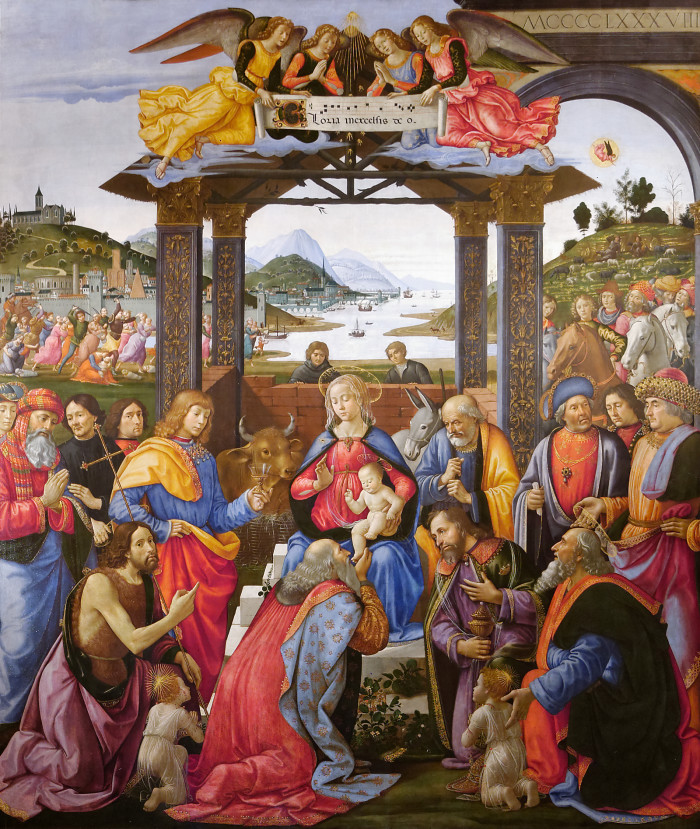 The centerpiece of the Galleria dello Spedale (art gallery) is a famous altarpiece by Ghirlandaio made for the annexed church and other objects that make up the artistic heritage of the instutite. The MUDI, Museo degli Innocenti now also offers childrens’ workshops in Italian, English, French and Spanish to encourage to play and learn with art – here’s the website for information about the workshops.