When was the last time you saw Piazza Duomo in Florence without the 2000 busses per day that pass by it? Perhaps you remember that in the 60s and 70s, cars could park right up beside the baptistry and around the back of the dome! Probably the last time this space was really quiet is illustrated by this photo borrowed from Alinari taken in the 1890s, but then you’d have had to deal with lots of hand-carts. Well this weekend folks, it’s all going to change! 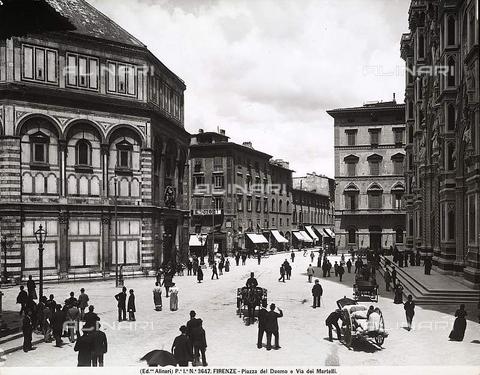 Foto: archivio alinari 1890 circa, used without permission for the purpose of illustration (www.alinariarchives.it)

Two thumbs up to Mayor Renzi for making a difficult decision: from this Sunday October 25th 2009, piazza duomo is going to be pedestrian only. And seriously. Like, no bicycles, no taxis. Ever. And no busses.

If you’re a resident of Florence like I am, you may be worried about how your bus route will be affected by these changes. I have been nattering on about the #6 route no longer taking me where I want to go for the past two weeks (to my husband’s chagrin as i’ve prematurely started talking like a retiree). But I’m learning to deal with it, because the benefit will be great for everyone. So, my bus will hit piazza san Marco and then be re-routed to the train station. Within a few months there should be a better electric bus system in place that will cover some areas now left inaccessible by public transport.

You can download the new bus route explanation here.
In other transport news: Bus tickets now last 90 minutes for the same price, and a 30 euro “carta agile” (electronic bus card) makes for better savings for frequent bus-takers (35 trips loaded on the card means a cost of 86 cents per trip).

1) The mayor’s office has announced that there will be festivities for the launch of the pedestrian only piazza; these will be announced on the website www.unbacioneafirenze.net . I guess they’re waiting for a secure weather prediction cuz the information is not up yet. I’ll tweet (@arttrav) or facebook the news when I hear it.

2) Residents of Florence and anyone born in Florence can get into Palazzo Vecchio for FREE that day, and will be able to visit normally closed areas. Hours: 10-24!!

So what do you think? Is this a good move?