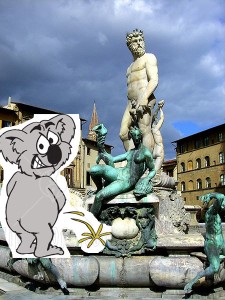 Bartolommeo Ammanati’s Neptune Fountain has been the subject of repeated attacks over the centuries, some of which were intentionally made to offend the ugly mass of marble, others unwittingly participating in a historic tradition.

The most recent “attack” took place two nights ago (June 6th) and belongs to the latter category (I assume). A drunk american tourist (female), accompanied by a female friend, decided to climb the metal barrier and squat to pee in the fountain (read the italian article on corriere.it). Admittedly there are too few public bathrooms in this city (and none open at night), and the sound of water can encourage urination, though last I looked this 16th-century fountain is ugly but does not resemble a urinal. Apparently a male passerby shouted something to this effect (he said “Florence is not a bathroom”) at said tourist  who quickly ran away with her friend. The offender has not been caught and I would like to point out that the newspapers seem to have assumed that she is american, but she might be english or irish for all we know. Did they analyse her accent? A previous attack took place in 2005 when a 30-something youth from Empoli (yes, a drunk italian, not a drunk american) climbed up the figure of Neptune and broke off his right hand at the wrist.

The scandal is double here. First, we can chalk this up to the long list of embarassing acts committed by drunk or drugged American students or tourists in the past years, culminating in a tragic killing a few weeks ago. There is no question that the city has reached a saturation point and these issues will be addressed – I have a secret project up my sleeve for that one (Matteo Renzi or whoever gets elected mayor later tonight, please feel free to contact me for further information ;-) ).

The second scandalous element is that the newly installed video surveillance system observed this event without setting off a very loud alarm (basically, the alarm rang quietly, and so nobody heard it). I really wonder how this could have happened when there is supposed to be a guard on duty at the loggia dei lanzi at all times, and that’s just steps away.

Not just tourists but also Italians seem to hate this statue enough to damage it in a creative variety of ways (see article from 1997). The security system was also not working when someone attacked the horses and other elements of this fountain with a hammer back in 1997, which was just one of a decade’s worth of similar assaults that resulted in broken legs (of sculpted horses, not of the uncaught offenders). Back in the 19th century one of the bronze horses was in fact tossed in the arno and never retrieved. Other horsing about might be more alcohol-induced: in 1991 a naked man climbed up the statue under the eyes of hundreds of passers-by, while in 1982 when Italy won the world cup of soccer, somebody painted Neptune’s shoulders blue in celebration.

These more modern-day assaults continue a tradition that began very soon after the installment of the hulking muscular sculpture presiding over the city’s first public fountain, which was commissioned by Cosimo I de’Medici in 1559. Out of disdain for the Grand Duke as well as for Ammannati’s limited sculptural skill, people immediately started washing their clothes and doing other things to sully the waters that triumphantly marked the end of an acqueduct built by Cosimo. There is a sign posted on the wall of the Palazzo Vecchio, to the right of and just behind the fountain, that in fact prohibits people to “fare sporchezze di sorta alcuna, lavare in essa calamai, panni o altro né buttarvi legnami o altre sporcizie” – “to make a mess of any kind, wash in it (the fountain) ink pots, clothing, or anything, nor to throw in it wood chips(?) or other dirt”.

Clearly our latest drunken “american” tourist did not heed notice, and takes the flack for doing what italians have been doing for centuries.

A final note: I don’t condone this activity just because I”m writing about it in this contextualized manner. In fact I wonder what the HECK all these people were thinking. This is a priceless work of art and a symbol of the city.

Question: what’s YOUR take on the matter? Are people totally unthinking? does being drunk actually make one do this stuff? what can be done to prevent this kind of behaviour? and to protect the works of art?