Should I go to the Cinque Terre? Is the Cinque Terre too crowded? I recently visited to get the lowdown on the area’s mass tourism crisis and how it’s impacting the visitor experience – as well as life in the five picturesque villages. The people of Riomaggiore and Manarola spoke with me and helped me develop these tips for responsible travel in the Cinque Terre.

“Tourism has changed this place,” admits Fabrizia Pecunia, the mayor of Riomaggiore. For one, she says, people don’t greet each other in the streets the way they used to – simply because the streets are so packed. Yet, on a walk around town with her in Fall 2017, she is stopped at every turn. “That’s our new mayor!” says one lady, proudly, to her husband. “Hey Fabrizia,” beckons a group of old men sitting on a bench. They proceed to joke around, and also complain about a few things. Further up the street, a workman leans on his shovel and says “I wanted to talk to you about the school: did you know we don’t have enough teachers?” She turns and says: “You see, without people like him, without the schools, I might as well hand over the keys to this place to Disneyland.” 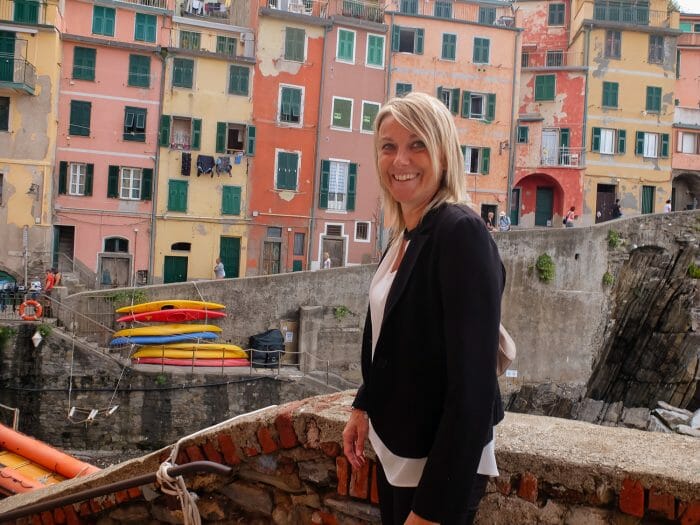 Fabrizia Pecunia, the mayor of Riomaggiore

The Cinque Terre is a living, breathing collection of small towns on the Ligurian coast that are part of the 3860 hectare Cinque Terre National Park. Its 4000 residents make this the most densely populated park in Italy, but as long as they remain, there’s hope that this place can keep its authenticity. The area’s traditional viticulture industry is what shaped the land of the Cinque Terre into terraces, held together by dry-stone walls and reached by footpaths. Now, the average age of winemakers here is over 65, and many residents have abandoned agriculture for the safer industry of tourism. On the positive side, the area has 100% employment. Meanwhile, the number of tourists who visit the towns on a daily basis continues to grow. 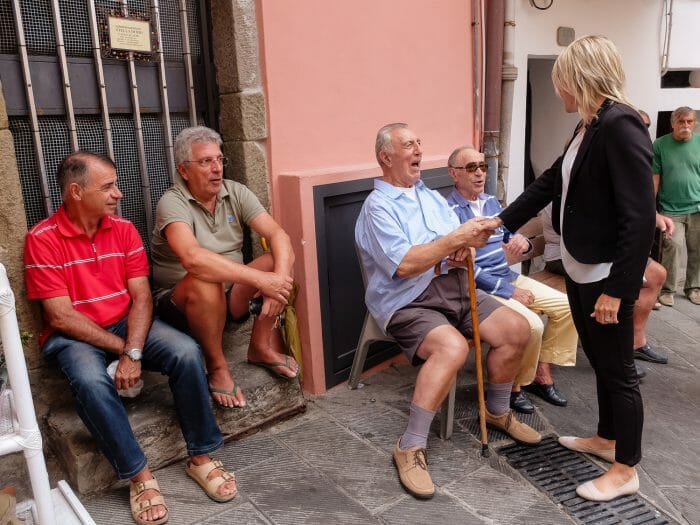 The mayor stops to speak with residents observing life…

Local administrators have a plan to try to limit mass tourism to the Cinque Terre, but a lot of responsibility lies with visitors themselves. All the residents I spoke with expressed frustration with the large tour groups, but not for the reasons you’d think: more than the inconvenience to themselves, they know that negative experiences reflect badly on the place. They have a just sense of pride and they want you to love it as much as they do. Their Cinque Terre travel tips are the most valuable ones we could think to pass on.

Think about why you’re visiting

The Cinque Terre attracts a certain type of traveler. It’s not a collection of “don’t miss” historical monuments: the place’s atmosphere is the attraction, and it demands time to absorb it. This is the perfect destination if you enjoy nature, hiking, taking pictures… but also a little hustle and bustle. 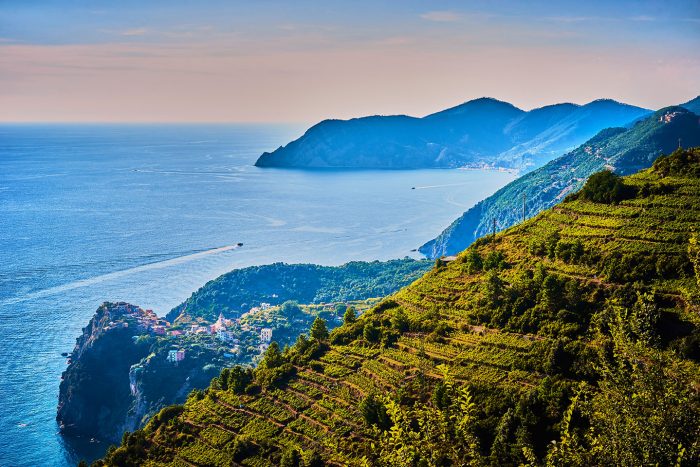 Dramatic coastline of the Cinque Terre – great if you love photography!

Bianca Gignac, a Canadian who married a man from Riomaggiore, runs a womens’ travel experience company called Italian Fix, and her website is one of the best resources in English about the Cinque Terre. For her, the Cinque Terre is for dreamers. “The villages of the Cinque Terre are the antithesis of our modern world; their ruggedness and simple lifestyle attracts especially North American travelers. It’s very hard to get to, the landscape hasn’t changed, and that’s why it is still a wonderful destination.”

Bianca doesn’t recommend visiting if you can’t spend the night, and most residents we spoke with agree. The busiest hours are from 10am to 4pm, when the day-trippers are in. Soon after, the buzz dies down and you can sit back, have an aperitivo, and watch the sun go down over the sea. The secret, she says, is in the timing. Bianca has also provided these tips for visiting the Cinque Terre in the wintertime.

Insider tips can make or break any trip. It’s important to read up on the towns and their characteristics, but guide-book descriptions will rarely tell it like it is. Online resources like travel forums and blogs are helpful, but insider information is best, if you can get it.

The ever-changing nature of the Cinque Terre makes being informed all the more important. “People are coming here surprised to find the Via dell’Amore closed,” exclaims Amy Inman, a Californian transplanted to Riomaggiore some 15 years ago. Her blog, Cinque Terre Insider, collects travel tips as well as timely information normally hard to find in English, like notice of road closures or other things that may impact your visit.

Hike with all five senses 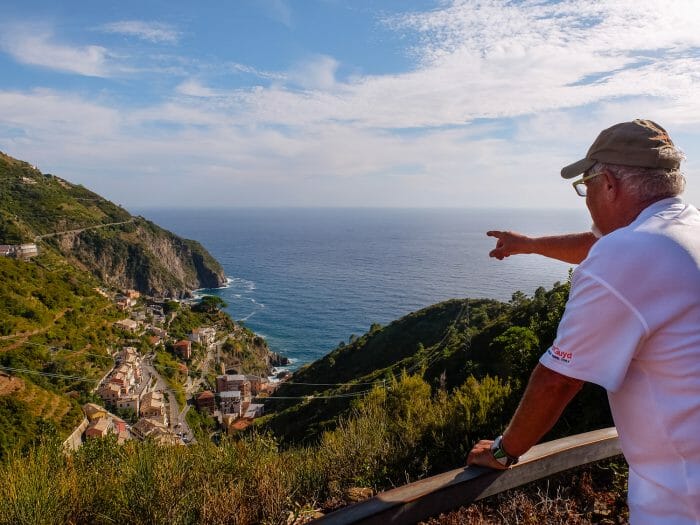 Pal shows me the ropes – from above!

“The Via dell’Amore is frankly the worst trail if you want to get to understand the Cinque Terre,” declares Pall Forloney, a private trekking guide, as we clamber up the rather steep trail number 531. With the easy coastal stroll between towns closed since a 2012 landslide, hikers are diverted on to the internal trails, which go up and down a steep mountain along narrow paths dug out hundreds of years ago by farmers to access their terraced plots of land. Which, if your glutes can handle it, is a marvel to behold. This experience is not just about the view out to sea, but about the actual construction of the hiking path, and the fragrant as well as poisonous plants that grow alongside it. 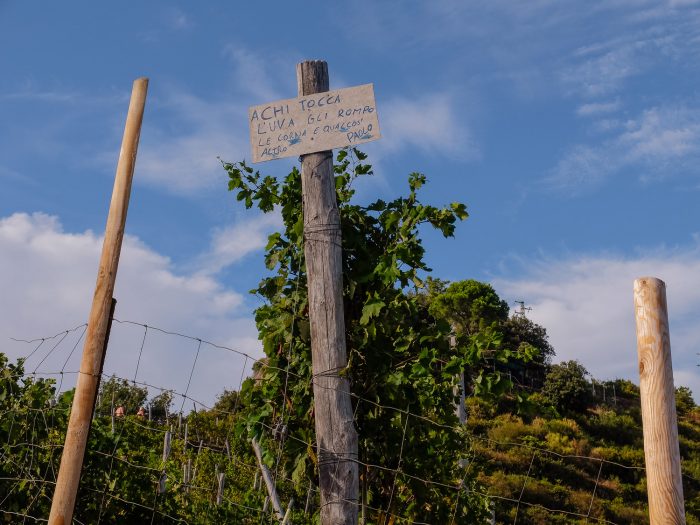 A not so polite sign tells people not to touch the grapes… or else!

The paths run right through vineyards, the vines heavy with ripe white grapes. A sign in Italian reads “If you eat these grapes I will break your balls and then some – Paolo,” the words of an exasperated farmer who has too frequently found tourists snacking on his fruit. Pall’s more polite English translation has been posted, reminding passersby that “this is my livelihood.” 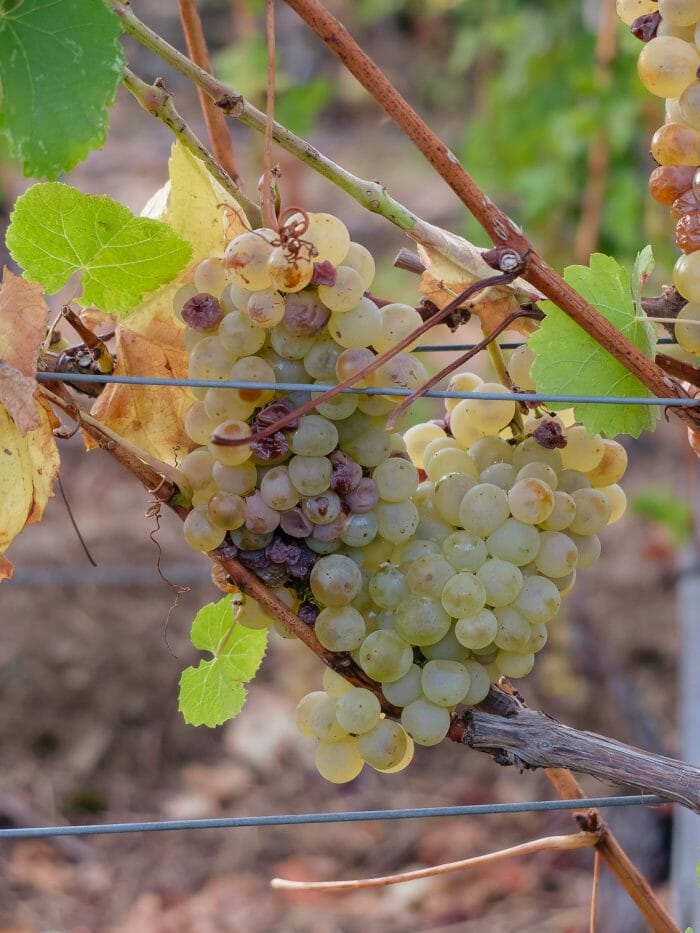 Grapes: you can look but don’t touch!

We stop to observe where nature has taken its course on the dry-stone retaining walls that characterize this landscape, and elsewhere where the passage of hikers has damaged the terrain. Forloney is concerned that the elevated number of tourists on these trails is impacting their preservation. His top tip: please do not use metal-tipped alpine hiking poles here. They dig out the rocks, allowing water to flow underneath, which could cause mudslides or landslides in the long term. 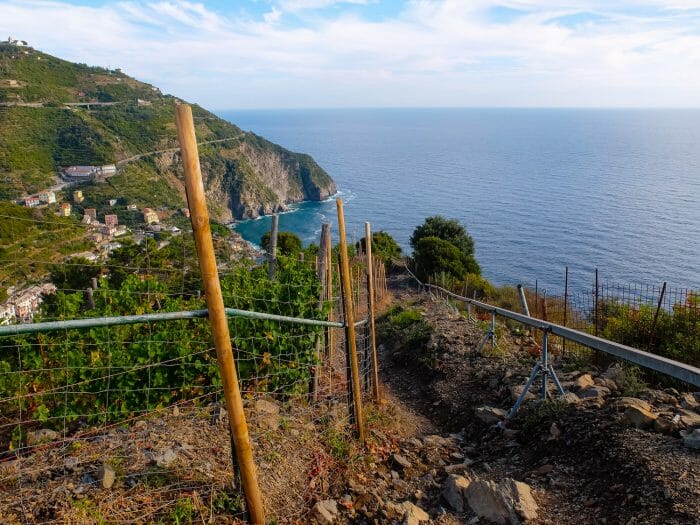 On this steep trail, observe the metal rail for transporting grapes. The hiking trail is ruined, Pal says due to metal alpine poles

Few visitors to the Cinque Terre will find fault in the suggestion to help out the area by drinking its excellent local wine. This is one of a few places in Italy that practices heroic viticulture, which means planting vines where there is more than a 30% incline. And it is truly heroic. 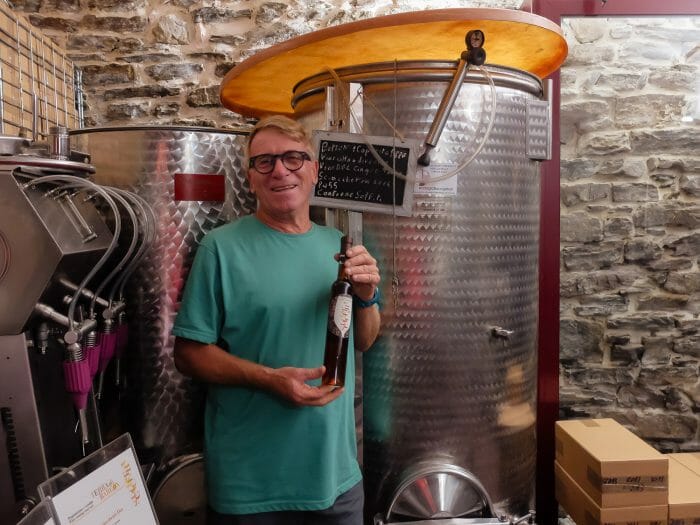 Roberto Bonfiglio shows us his “cantina”

Roberto Bonfiglio’s skin is hardened by the sun but you’d not give him a day over 55; at 68 years old he’s still carrying baskets laden with grapes on his back. He’s been doing this his whole life, alongside his elder brothers. The land he cultivates was bought by his father, who earned the money to buy it through eleven years of work in New York between the wars, in a time when Riomaggiore didn’t have electricity or running water, but life wasn’t much better for an Italian immigrant in the States. Bonfiglio makes Terra di Bargòn Sciacchetrà, a DOC sweet wine only available in the Cinque Terre. It’s composed of the three grapes that also make the local white: bosco, vermentino and arbarola. Grapes here are picked by hand, without tractors to move the full baskets, and then laid to dry, exposed to the sea wind for at least two months. They are then destemmed by hand before being pressed and left to age for at least two years. In the intense and sweet flavour of dried figs and apricots, one can almost taste the sea. Sciacchetrà and the other white wines made in the Cinque Terre don’t come cheap, but now you know why. 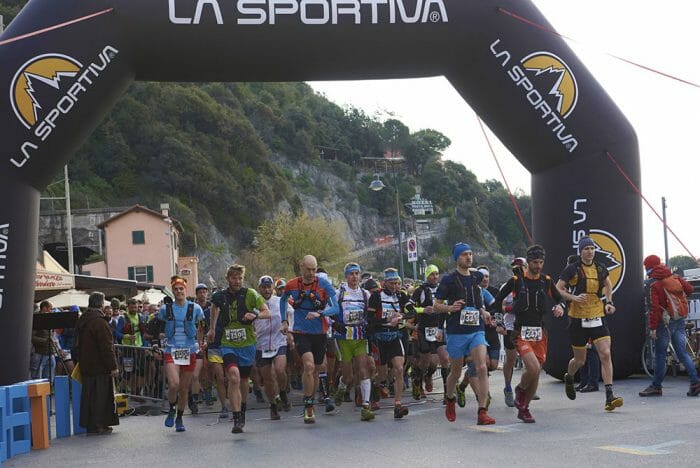 Extreme runners who also love drinking can additionally support Cinque Terre viticulture by participating in Schiacchetrail, an annual 47km trail running race with 2600 meters of positive elevation game, conveniently paired with a wine festival. Brainchild of Manarola residents Christine and Nicola and operated through a sporting association, an informational map and list of winemakers is available year-round in their gear shop, Cinque Terre Trekking. They believe that “the path to revive the soul of this territory is to exalt hard work as a moment of research, analysis and union,” seeing a parallel between trail running and heroic viticulture. 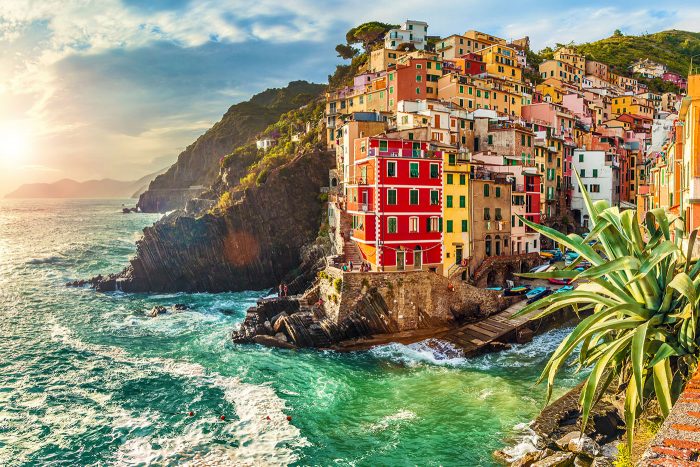 The Cinque Terre is a National Park, but it doesn’t have an entry ticket. But perhaps it should, for that might remind us to “Leave No Trace” and treat this natural wonder with the respect it deserves.

The optional Cinque Terre Card is a service card that gives access to the number 2 coastal hiking trail, and that can be boosted with a 24 hour train pass. Additional services for the card are being integrated. Director Patrizio Scarpellini encourages visitors to buy the card, revenues from which go to trail maintenance as well as into numerous projects to support local farmers. He hopes that the card might soon be extended to other trails in the area in order to better research and control visitor numbers and protect this territory.

Further reading: Other articles about the Cinque Terre