At Milan’s Palazzo Reale until January 31 2010 is the first major retrospective in Italy dedicated to the American artist Edward Hopper (1882-1967), the famous realist painter.

My Mom went there on her day trip to Milan and has brought back some fun pictures taken in the exhibit’s interactive section (see below), in which visitors get the chance to pose in the same position as the woman in the famous painting “Morning Sun” of 1952.

Mom writes: “One hundred and sixty of the artist’s works are on display — mainly sketches, preliminary studies, and the artist’s ledgers. There were some famous works, but curiously missing was the painting Nighthawks, easily Hopper’s most recognizable painting. But I thought the show was well done and certainly taught me a lot about the artist, his life, his themes, his subjects and his artistic methods.”

Here’s what you can do in the interactive section, I got a good laugh out of this – my dad in pose: 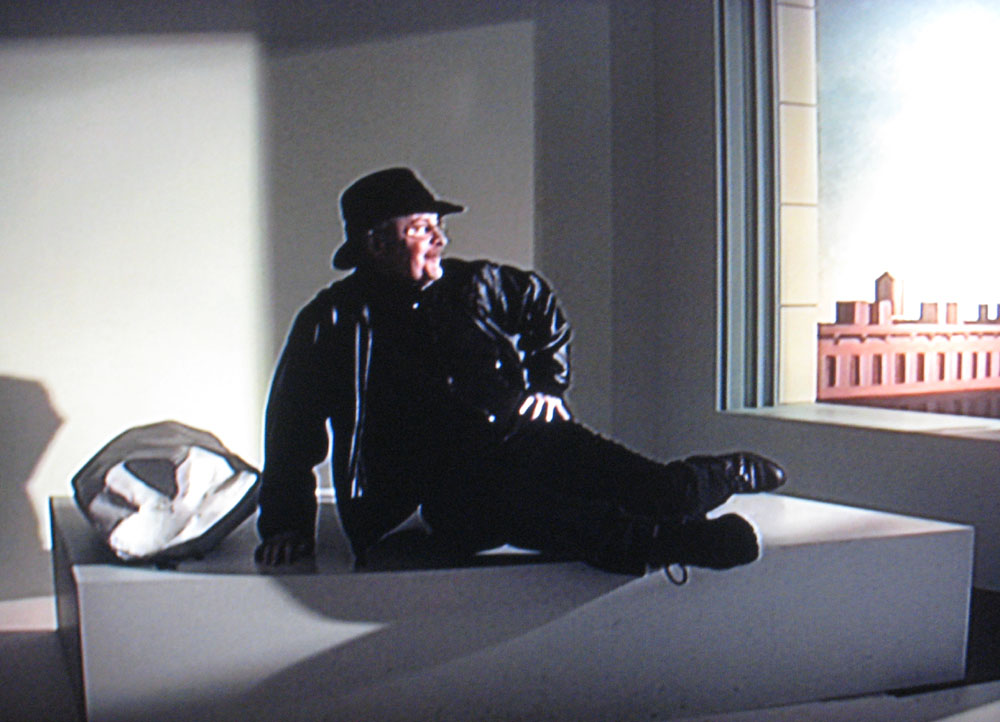 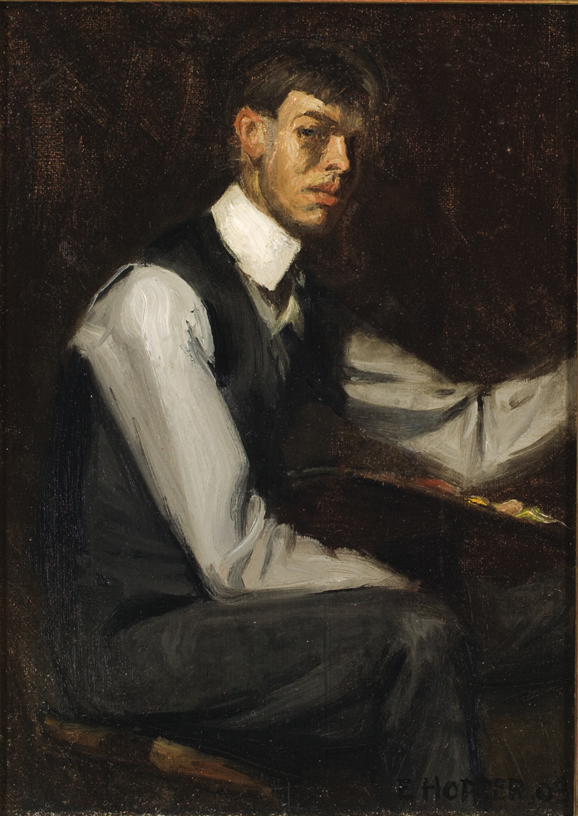 Hopper was born and grew up in Nyack, a small town in New York State. He studied illustration for a short period, then painting at New York School of Art under legendary masters William Mer­ritt Chase and Robert Henri. He visited Europe three times (from 1906 to 1907, in 1909 and 1910) and his experiences in Paris, above all, made a lasting mark on him: he remained a lifelong Francophile, even after settling permanently in New York in 1913.
Despite his imposing physical presence – he was six foot two – he was famous for his reserve, and very rarely wrote or spoke about his work. He died at the age of 84 and his work enjoyed the esteem of critics and the public throughout his career, despite the success of the up-and-coming avant-garde movements, Surrealism, Abstract Expressionism and Pop Art.

In 1948 the magazine “Look” named him one of America’s greatest artists; in 1950 the Whitney Museum dedicated an important retrospective to him, and in 1956 he appeared on the cover of”Time”. In 1967, the year of his death, he represented the United States at the prestigious Bienal di São Paulo. Since then Hopper’s work has been celebrated in numerous exhibitions and has inspired countless painters, poets and filmmakers. In a 1995 essay the great novelist John Updike paid an eloquent tribute to his “calm, silent, stoic, luminous, classic” works. 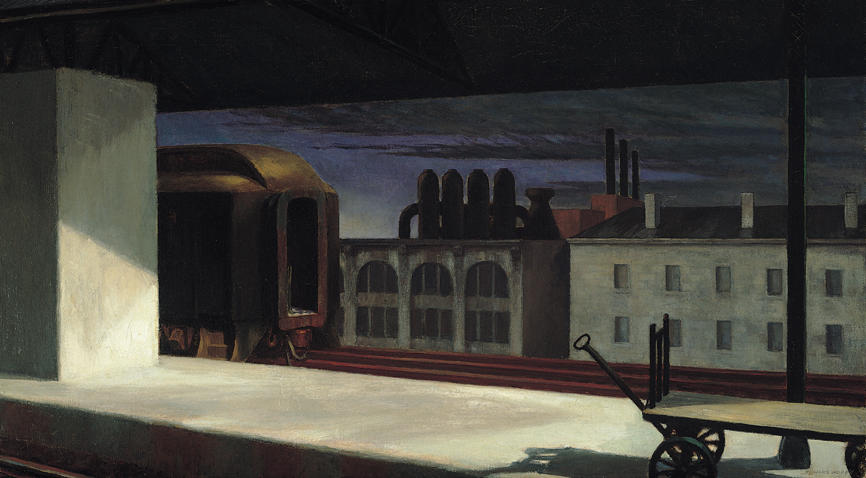 The exhibition presents more than 160 works, including famous masterpieces such as Summer Interior (1909), Pennsylvania Coal Town (1947), Morning Sun (1952), Second Story Sunlight (1960), A Woman in the Sun (1961) and various paintings that have never been exhibited, like the stunning Girlie Show (1941). It explores the whole of Hopper’s oeuvre, and all the techniques used by an artist now viewed as one of the classic painters of the twentieth century.

The exhibition will be staged in Palazzo Reale in Milan from 14 October 2009 to 31 January 2010 and is sponsored by Roche Group, the leading health industry company. Immediately after that it will be held in Rome, at the Fondazione Roma Museum, from 16 February to 13 June 2010, and then at the Fondation de l’Hermitage in Lausanne, from 25 June to 17 October.

Edward Hopper’s career is closely linked to the Whitney Museum of American Art, which hosted various exhibitions of his works from the first in 1920 at the Whitney Studio Club, to the memorable shows held in the museum in 1960, 1964 and 1980. Since 1968, thanks to the bequest of the artist’s widow Josephine, the Whitney has been home to his entire legacy: more than 3,000 works which include paintings, drawings and etchings.

Curated by Carter Foster, the Whitney Museum curator who granted the loan of the largest nucleus of works, the exhibition, realized with the technical coordination of Carol Troyen, also boasts other important loans from the Brooklyn Museum of Art in New York, the Terra Foundation for American Art in Chicago and the Columbus Museum of Art.
Structured in seven sections according to chronological order and theme, the Italian exhibition covers Hopper’s entire oeuvre, from his education, to his years as a student in Paris, up to his “classic” and best-known period of the 1930s, 40s and 50s, closing with the large, intense images of his later years. The show explores all of the artist’s favourite techniques: oil, watercolour and etching, and devotes special attention to the fascinating relationship between his preparatory drawings and his paintings: a vital aspect of his work that up till now has not been greatly explored in the exhibitions dedicated to him.

The first three sections: “Self Portraits”, “Education and Early Works. Hopper the Illustrator” and “Hopper in Paris”, present a group of promising self portraits, the works from his academic period and the light-filled sketches and works of his Paris period, such as the well-known painting Soir Bleu (1914). The room dedicated to “Defining the Image: Hopper the Etcher”, with masterpieces such as Night Shadows (1921) and Evening Wind (1921), highlights his elegant technique and that “sense of the incredible potential of everyday life” that brought him great success and marked the start of a distinguished career.

The section entitled “Hopper’s Method: from Sketch to Canvas”, which celebrates the artist’s extraordinary talent for drawing, and explores his modus operandi, presents a significant set of preparatory drawings for paintings such as Morning Sun (1952) and the earlier work New York Movie (1939), the sketches for which clearly reveal how his female figure takes shape: starting out almost as a portrait of his wife Jo (his only model), the figure gradually evolves into the pensive usherette with film star looks standing in the movie theatre – one of the artist’s favourite subjects. This section shows how Hopper’s realism is often the result of an amalgamation of several images and situations captured at different times and places, not a simple reproduction from life. The exhibition also exceptionally includes one of his Artist’s Ledger Book, the famous ledgers he and his wife compiled, and which contain sketches of many of his oil paintings.

In the rooms dedicated to “Hopper’s Eroticism” the exhibition gathers some of his most significant images of women absorbed in contemplation, for the most part nude or partially undressed, alone in interiors. Together with the works in the section “Artist’s Essence: Time, Space, Memory” these works are a consummate representation of the artist’s aesthetic, his understated form of realism and above all his ability to reveal beauty in the most common subjects, often with a cinematographic slant that was much appreciated by the critics.

Hopper has long been associated with atmospheric images of urban buildings and the people who inhabit them, but rather than skyscrapers – emblems of the aspirations of the jazz age – he preferred the dilapidated red facades of anonymous shops, and lesser-known bridges. Some of his favourite subjects are images of life in tranquil middle class apartments, often glimpsed through a window from a passing train, and settings like diners and movie theatres; images that have acquired iconic status, as in some of the famous masterpieces presented here: Cape Cod Sunset (1934), Second Story Sun­light (1960) and A Woman in the Sun (1961). Hopper also painted some stunning watercolours during summers spent in Gloucester (Massachusetts), in Maine, and in Truro (Cape Cod) as of 1930. The sea rarely features in these paintings, which show sun-baked sand dunes, lighthouses and humble cottages, enlivened by sensuous contrasts of light and shade; paintings which always hint at a story yet leave the motivations of the protagonists unclear.

The exhibition also features an important photographic, biographical and historical component, tracing American history from the 1920s to the 1960s: the Depression, the Kennedys, the boom years. An opportunity for greater insight into today’s global recession and Barack Obama’s America.

The Edward Hopper exhibition aims to see people as “active subjects” rather than “consumers”, with a view to creating an event that, first and foremost, will be a unique, engaging experience for visitors. With this objective in mind, for the first time in Italy the exhibition exceptionally hosts an interactive and multimedia installation by Gustav Deutsch, the renowned Austrian film maker and video artist (Vienna 1952), who has produced countless films, videos and performances throughout the world. Chosen by Arthemisia, in agreement with Palazzo Reale in Milan, the installation entitled Friday, 29th August 1952, 6 A.M., New York will enable visitors to physically enter Hopper’s world, with a reconstruction of the setting depicted in the painting Morning Sun (1952). In this way visitors will be able to appear in the painting, entering the “set” and moving around at will, like actors in a series of brief plays, filmed by a camera and projected onto a screen.

The exhibition features exclusive, engaging educational activities designed by Francesca Valan for children and young people (aged 5-14) visiting the exhibition. Those who wish to follow the stages in Hopper’s creative process will receive a beautiful sketchpad at the entrance, a scale reproduction of the one that the artist himself used, containing all the indications to venture into his world. Younger visitors (aged 2-5), accompanied by their parents, will be able to take part in a fun treasure hunt, following the instructions printed on a number of special postcards.