Contributed to arttrav by my Mom, Audrey Korey, aka Staff Writer (new hire). 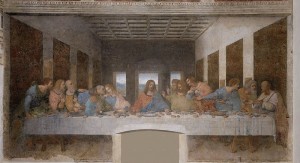 It has rained in Florence almost every day since we arrived before Christmas. The weather was so bad we couldn’t make many of the day trips we had been planning, but we decided to go to Milan for the day to meet up with some old family friends. The new high speed train, the Freccia Rossa, gets you from Florence to Milan in just one hour and 47 minutes — a big difference even from the Eurostar, and with a proportionally high price tag. Right now trentialia has a 99 euro special offer for those taking a day trip on the Freccia Rossa. [Editor’s note: I wouldn’t normally advise people to take a day trip to Milan from Florence, but frankly, with the fast train it is now do-able if you just want to see a few highlights, as Mom did.]

I had seen Da Vinci’s Last Supper (il Cenacolo) with my parents in the 1970s, when it was in really deplorable condition, so I was anxious to see it in its restored state: the restoration took over 20 years and was finally completed in 1999, but tests to confirm that the restoration and new environmental safeguards really worked to protect this extraordinary mural painting were only carried out in 2009. I ordered tickets on line (a necessity even in very low season), luckily giving us time to account for the train’s possible late arrival, which turned out to be very good thinking.

That day the rain reached a new frenzy. It wasn’t just an interminable drizzle but day-long pouring rain. I was feeling like a drowned rat by the time we reached the Metro from the train station (Centrale, green line) and we went directly to the Convento de Santa Maria delle Grazie, even though I knew we’d be at least an hour early for our entry time (exit at Cadorna and walk about 10 minutes to the church). By this time, every part of me was wet and cold. Armed with a strong coffee at a bar across the street from the Last Supper, we walked across the pond that separated us from the church.

Now the Last Supper is in a climate-controlled, sealed room; only 25 visitors are allowed in at a time for 15 minutes, so it is best to do your research before you go. There are wall panels that describe the work’s history and restoration that you can read while you wait in line, but if you wish for something deeper, find out more in advance. Here is what I learned that might help you prepare for a visit (virtual or otherwise).

Visitors might be upset when they realize that this is really not Leonardo’s painting at all but a linking of fragments filled in with available information culled by a team of dedicated experts. The most important source for the mural’s reconstruction is the many preliminary sketches preserved at Windsor Castle.

Despite this, I was surprised by how much I liked the mural painting. I use the term wall painting because this is not a true fresco – as you probably know, Leonardo did not paint it on wet plaster. Always the great experimenter, he sealed the stone wall and painted in oil tempera on that “canvas”. Within a few years after its completion, there are records speaking of its considerable decay. Da Vinci tried this method because it yielded richer tones and colours and gave him much greater control over this complex rendition of what was a very common subject. Really, though, I wonder: wouldn’t Leonardo have known that this would be a disaster? Or did he not care?

History was also very unkind to the wall painting which was used as target practice for Napoleon’s troops; the location was used at various times as a barracks and a prison. In 1943, the building was bombed, part of the wall collapsed and the roof was torn off, leaving the painting out in the open until the end of the war.

The most recent restoration had to erase the many other misguided restorations of the painting, clean all the dirt and pollution from it and scientifically determine the painting’s original form. Many parts were not recoverable so they were repainted (based on what Martin Kemp has identified as preparatory sketches) in watercolour in subdued tones to differentiate them from the original. But the whole is not displeasing and without this controversial restoration, the painting would be completely lost to us.

Now a bit about the painting itself. It was commissioned from Leonardo by Ludovico Sforza called “il Moro”; the painting was carried out 1495-97. I consulted Gary Radke’s textbook on Renaissance art (Art in Renaissance Italy

) which confirms what I read elsewhere and observed in person: Leonardo selected the moment just after Christ announced that one of his disciples will betray him, imagining the apostles’ confusion and self-doubt, and portraying their agitated reactions. This is the part before Christ reveals that it will be Judas, so all of them are basically saying “will it be me?” or “gee I hope I don’t do it” (ha ha). You can look at each apostle, identify him using the chart on the wall outside or bring your own, and try to determine what he was saying based on his facial expression. Figures are grouped in threes, which is of course a significant number (the Trinity) but it’s also simply the best, most practical way to set it up and make it legible. This seems so obvious a choice but in fact other aritsts who painted this subject, like Ghirlandaio and Castagno, just lined the apostles up behind the table (and stuck Judas out front, usually). 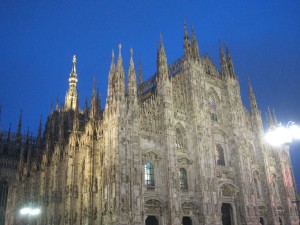 We didn’t visit much more that day despite my best intentions, as the rain was just relentless. We managed to go to the Hopper exhibit at Palazzo Reale (see separate post), and we saw the Duomo as planned, but not perhaps in depth as one might. I wanted to see this as it is apparently the largest Gothic cathedral in the world, and it took 500 years to complete. A friend has told me that, in Italian – or perhaps in Milanese – if something is taking a dog’s age to get done, they say it is an “opera del duomo”. The sky turned a deep blue at dusk as you can see in this rainy photo. Given the rain falling in sheets by this time we also opted to view the Duomo from the nearby café of La Rinascente (department store chain), where I got this great video shot of Duomo through rained-upon windows – to me it looks very Gaudi-esque. We saw a few other sites in passing but mostly just enjoyed keeping dry when possible and catching up with our friends over numerous coffees.

What would YOU do in Milan on a rainy day (other than wear rubber boots)?