Tarot has left its presence on a few places in north-central Italy; this guest post presents an Italy tarot itinerary to follow if you’re an enthusiast, and suggests a guided tour if you want to deepen your knowledge.

In Italy, art and history is everywhere. It’s so full of it, you’d still find something new to discover even after a lifetime in this ancient land. That said, it comes as no surprise that something as obscure and esoteric as Tarot (popularized as objects of witchcraft or fortune-telling) traces its roots all the way back to Renaissance Milan. 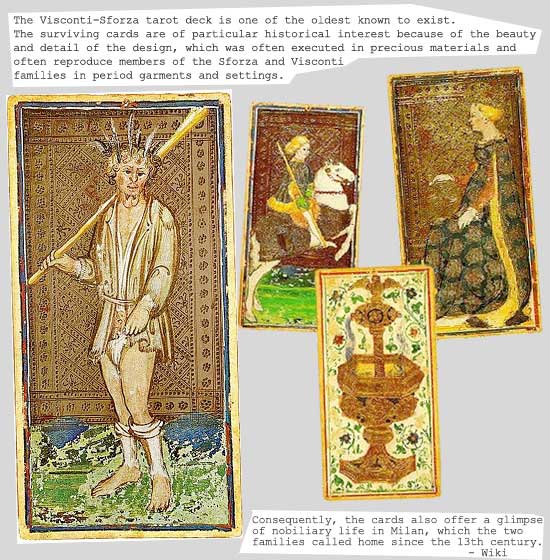 A brief introduction to Tarot

Today, Tarot is often associated with secret dimensions. Too many images and symbols seem to relate to one another. The order of the cards seemed to tell more than just a simple story, connections between numbers and figures touched on something deep and personal like The Fool, the first card and The World, the last card, reflecting both the beginning and the end.

Many great thinkers have written about it and even Carl Jung’s archetypes are represented, each reflecting a unique aspect in the life of humans. In this manner Tarot symbolism became useful for understanding human psychology.   Also in the realm of science and spirituality (otherwise known as alchemy) connections have been made, some of them surprisingly link to the Kaballah and even the body Chakras.

There are numerous perspectives and ways to think about and/or use Tarot. Surely it has gone far from being just a set of playing cards – and yet it still is! The normal deck of playing cards with five suits (clubs, diamonds, hearts, and spades) is really a watered down version of the original Tarot. The hardly-used Joker card that comes with every pack is actually The Fool. In Tarot sequence, The Fool represents the numberless number zero – therefore existing outside the rest of the deck!

Now on to the itinerary! 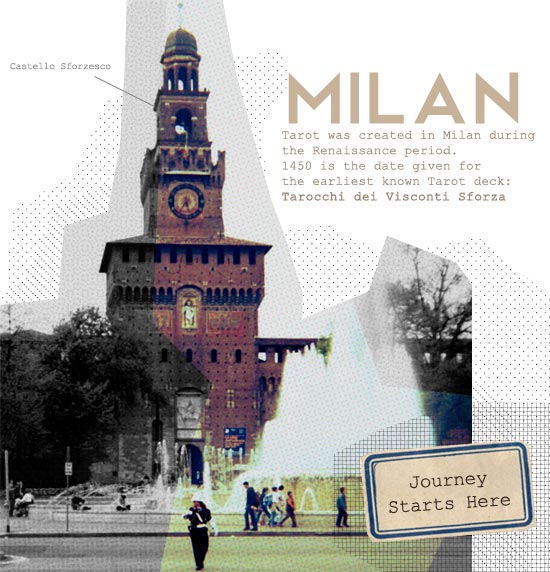 Located near Milan’s central station, Castello Sforzesco stands magnificent. With a dramatic history and architecture it is also considered the birthplace of Tarot. It was here, under a well, that the remains of the first Tarot deck were found. Originally a present for the joining of the noble Visconti and Sforza families, the intricate hand-painted and gilded set of playing cards (commissioned by the Visconti family to the artist Bonifacio Bembo) were used primarily for, well, playing. There was nothing occult or witch craft about it – in the beginning. It was only until many travels (“Tarot” is in fact French for the original Italian “Tarocchi”), transformations, and interpretations later that it gained its esoteric appeal. 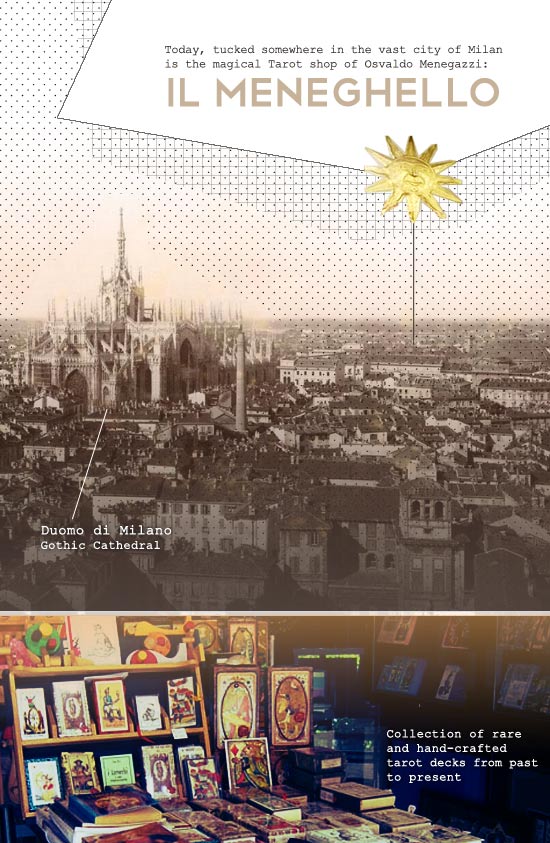 Now on to the question, where can we find the remains of the first tarot deck? Unfortunately not in Castello Sforzesco but in the nearby town of Bergamo at Museo Adriano Bernareggi.

The Museo dei Tarocchi is nestled in the small hilltop village of Riola (Bologna). The museum houses an impressive array of original, Tarot inspired artworks from around the world, as well as a remarkable collection of decks from the rare to the unusual and most popular. There is also an impressive library of books and they have published quite a few wonderful decks and books as well. The 400 year old building of the Tarot museum so beautifully restored by Morena Poltronieri, the director, along with her co-founder and business partner Ernesto Fazioli. It has many hidden treasures including tree trunks that open to reveal shelves of prized Tarocchi and tiny doors with lit windows hidden in stone walls that open to show off precious miniature artworks.  The museum is open by appointment only.

Niki created this amazing magical place where all twenty two Major Arcana trumps welcome us to explore and play in sight of the Mediterranean sea, surrounded by a rocky landscape graced with olive and oak trees. Unlike most museums where you are not allowed to touch or even take photos, the Tarot garden invites us to interact with her compelling, and richly symbolic art. (Read more about ArtTrav writer Alexandra’s experience at the tarot garden here.) 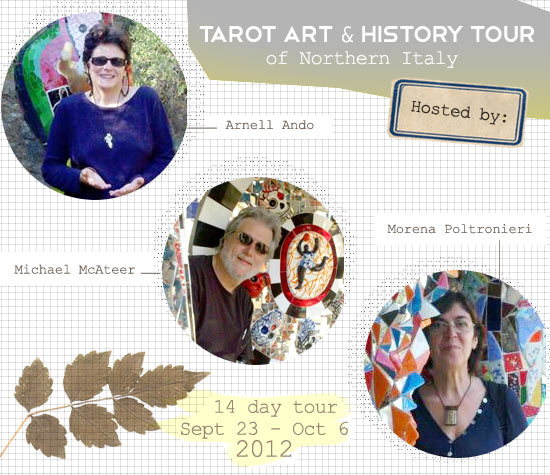 Given the obscure nature of Tarot and the obvious disapproval expressed from religious groups, it’s not as easy to track down the tarot-inspired work of artists and thinkers from past to present. However, there is a way to rediscover and explore its origins, here in Italy, and see some amazing art while exploring the Italian countryside AND staying at a medieval castle (among other things). If you are interested in learning more about Tarot in Italy, join the merry band of travellers in the upcoming Tarot Art and History Tour of Northern Italy (Fall 2012).

This is a guest post by Kat Conte, a multimedia artist who will be filming part of the tour this September.