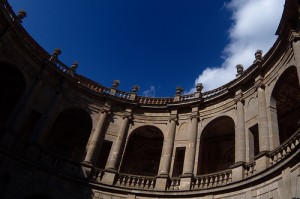 You could be forgiven for thinking that outside the main tourist sights, Rome, Viterbo, perhaps Tivoli, there isn’t much to see in Lazio. You’d be wrong. Northern Lazio, in between Rome and Florence, is an area mostly ignored by tourists and yet, for me, it’s one of the most interesting and beautiful regions you could visit. Infused by culture and history, firmly situated in the Etruscan, Roman, medieval, renaissance and modern heartland of Italy, Northern Lazio is more layered and complex than you could imagine. In this article, I’m going to describe a day out in Northern Lazio, taking in two cities, a palazzo, an agriturismo, and possibly a carnival or two.

The small cities of Caprarola and Ronciglione are very close to each other, perched on the edge of Lago di Vico, an ancient volcanic lake surrounded by farming and a nature reserve.

We’ll start in Caprarola, approximately 32 miles (51km) northwest of Rome (about 137 miles/220km from Florence), a picturesque town clinging onto a rocky outcrop with deep ravines on either side. 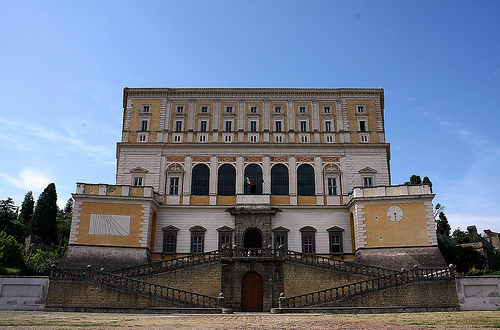 One of the main tourist sites in Caprarola is the Palazzo Farnese (not to be confused with the French embassy in Rome which has the same name). Villa Farnese, as it is also known, started out as a fortified castle designed for Cardinal Alessandro Farnese (the future Pope Paul III). However, work on the castle stopped soon after the foundations were built (between 1515 and 1530).  A grandson of Pope Paul III, also known as Alessandro Farnese, decided to turn the fortified foundations into a villa for his family. Palazzo Farnese sits atop Caprarola like a crown, dominating the city. It is built to a pentagonal plan (a consequence of its initial ‘fortress design). The villa is one of the finest examples of late Renaissance architecture, with strong Mannerist tendancies in the less formal areas (gardens, loggie).

The villa’s interiors are arranged over five floors, with each floor designed for a different function. You can reach the gallery and upper floors by five spiral staircases that dot the courtyard. The main rooms are located on the first floor, whereas a large central loggia looks down over the town. [Editor’s note: The fresco decorations throughout the villa, by Tempesta and other Mannerist artists, exalt the Farnese dynasty through an iconography planned by Annibale Caro. The iconography of these and of the architecture constitute a few decades’ work by the famous art historian Loren Partridge.) 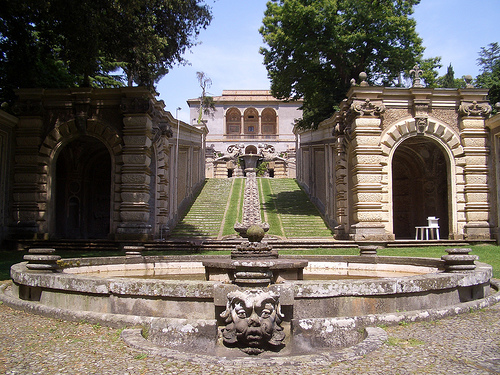 The gardens of Palazzo Farnese are extensive, and well worth a visit in themselves. Near the Palazzo, the gardens are ornate and formal, with box topiary and ornate fountains. [Editor’s note: the most famous fountain is the chain of water pictured here. There are seating areas designed to surprise – and wet – visitors.] There is also a small cavern with a pool, hidden away at the back of one of the box topiary mazes. As you progress further away from the Palazzo, the formality gives way to some chestnut woods (great for chestnuts and mushrooms in the fall) and then the giardino segreto, with a large summerhouse. The gardens continue after this with a rose garden and fountains. I didn’t go any further but there seems to be plenty more to see. The palace is open every day, except Mondays, from 8.30 to 18.45. The gardens are closed on Sundays and public holidays. Tickets are € 5.00 (€ 2.50 for 18 to 25 year olds) and entrance is free for under 18 and over 65s.

Other than the palazzo and stunning views, Caprarola also boasts a number of festivals and sagre, with Caprarola famous for its nocciole, or hazelnuts. The main sagra is in the fall, but there are many events throughout the year so do try to find out in advance if there is one there when you want to visit (check out caprarola.com for more information).

Wandering around Palazzo Farnese has the ability to build up an appetite. There are plenty of places to go in Caprarola, but I want to mention an agriturismo slightly off the beaten track, on a little back road connecting Caprarola and her neighbor, Ronciglione. Agriturismo Vazianello is 2.5km down strada vicinale di Vasiano and commands stunning views over the surrounding chestnut-covered landscape. The restaurant is open every weekend (although best to phone ahead to check if there is a wedding on) and provides really excellent food. I can heartily recommend the maialino al forno and the pappardelle al cinghiale. 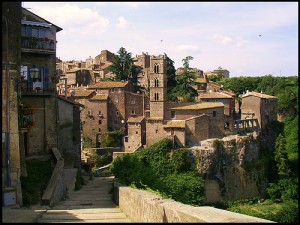 After lunch, it’s time to continue along the back road to our next city, Ronciglione (although calling this small town a city really feels like you’re stretching it).  This is an ancient Farnese town, first mentioned in 1103. Ronciglione is located in the Cimini mountains, over two tufa scarps, on the southeastern slope of Lago di Vico. The town’s economy is based largely on agriculture, with production of nuts, chestnuts and wine a specialty. The medieval part of Ronciglione is built on a hill protected from three sides by a deep gorge. The road from Rome is welcomed into the city through an ancient gate. Next to this, is the pretty Santa Maria della provvidenza bell tower. Another bell tower, from the lost church of Sant’Andrea is considered one of the finest medieval monuments in the town. Ronciglione is dominated by two large buildings; a castle, built by Sixtus IV, and a cathedral, designed by Carolo Rainaldi in 1660. The shape of the dome is similar to those of the twin churches found in Piazza del Popolo in Rome, also designed by Rainaldi. 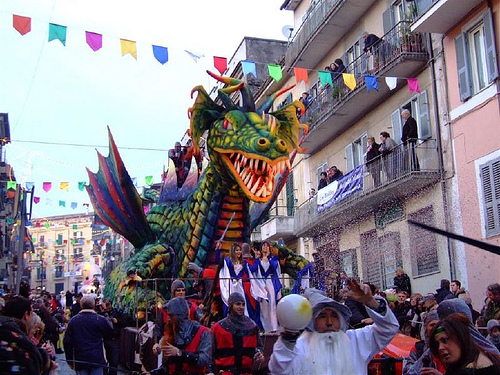 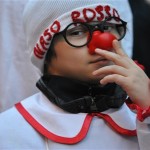 Ronciglione is famous for its Carnival. This is one of the oldest in central Italy and is characterized by a parade of allegoric chariots with masks and costumes and a riderless horse race. The typical mask found in Ronciglione is that of a red nose, with a white shirt (or nightshirt). Hundreds of people wearing these masks run up to passers-by offering them rigatoni pasta with tomato sauce. Whatever you do, don’t turn them down as the custom is for them to then throw the pasta (and tomato sauce) at the passer-by.

As in Siena, Ronciglione hosts a Palio, with the city divided into 9 contrades that compete for the crown. These Palio are slightly different to those in Siena and other Italian towns in that the horses are left to run without riders in what are called “empty races”. The 2011 carnival (or Carnevale) starts on the 17th February with the first set of ‘empty races’. The first parade will be on the 27th February and the carnival finishes on Mardi gras (8th March) with processions and even more ‘empty races’. The full program can be here. 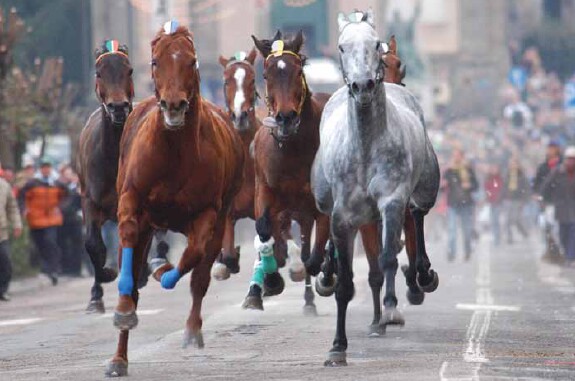 So there you go. Two small ‘cities’, about 10mins apart. In that space, you can find medieval churches, fortresses, a palace, one of the oldest festivals in Italy, a good Italian meal, and, if that isn’t enough, there’s always the Nature reserve and stunning views around Lago di Vico. Who said there was nothing much to see in Lazio outside the main tourist sights?

About the author, Peter McQuilton: Through a chance meeting with a Roman, his future wife, Pete McQuilton discovered the secret world of North Lazio. His website, lazioexplorer.com details his journey into Lazio, along with hints and travel/culture tips on how to survive off the tourist trail in ‘real’ Italy. In his “non-spare-time”, he works as a computer biologist at the University of Cambridge.