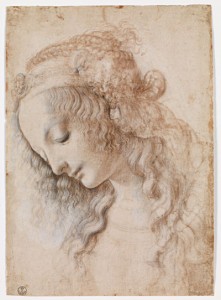 I don’t like the word stunning. The literal meaning of the verb to stun has been has been entirely diminished by its overapplication to everything from a nice dress to the Grand Canyon. Yet I must say: I was stunned by a Leonardo drawing yesterday at the Uffizi’s exhibit “Figures, Memory, Space. Drawings from Fra Angelico to Leonardo“.

To stun: knock senseless, reduce to insensibility or stupor, benumb, overwhelm (OED). Not many works of art have this effect on me, but the power of drawings, and particular of Leonardo drawings, is undeniable. No matter how many times I’ve seen them in reproduction, seeing them in the flesh – yes, flesh and paper – is an emotional experience. (The drawing in question, one of ten displayed here, is a sheet with mechanical studies and sketches for the Madonna and Child with St. John, catalogue number 56.)

Aside from the Leonardo, which sits at a symbolic heart of this exhibit at Florence’s Uffizi Gallery, here are three reasons why this is an important show, and thus: you should go.

You thought my first reason to go see this show might be something academic, right? Well hang on. Because being free doesn’t just mean that you don’t have to pay to get in. It’s part of the larger idea behind the exhibit, which is a 50/50 loan agreement between the British Museum and the Uffizi Gallery. This is my own interpretation, but the British approach is that art belongs to the people – to all of us – so entry to major museums is free. Not so in Italy where art is jealously guarded. With “Figures Memory Space”, the situation is (I believe consciously) inverted. The show in London had a 12£ entry fee but generated a record number of enthusiastic visitors. Here in Florence, the same works, displayed in the Reali Poste, can be seen for free (and hopefully lots of people, including you, will go see them).

These drawings from the beginning of the Renaissance to its highest manifestations in Leonardo and Michelangelo are finally back home: this is the British Museum’s gift to us. It’s also a gift from the Uffizi and from its sponsors, including the Ente Cassa di Risparmio, Enel, and Trenitalia. Thank you.

There is a complementary section of the show that is not free: in the Gabinetto Disegni e Stampe on the Uffizi’s first floor, another 50 or so drawings and prints expand the discourse present in the traveling exhibition with works on paper too precious to leave the gallery. There exists a famous list of drawings that cannot be lent (and another that cannot be consulted, even by scholars), and some of these are shown here, so it’s a very special occasion. I get kinda emotional just thinking about it.

2) Drawing is the highest art

Why is this gift necessary, here in Florence? The director of the GDSU reminds us in her catalogue essay that Giorgio Vasari calls drawing “father of our three arts – architecture, sculpture, and painting”; drawing is the keystone of creativity, the first visible manifestation of the idea (as explained in Panofsky). 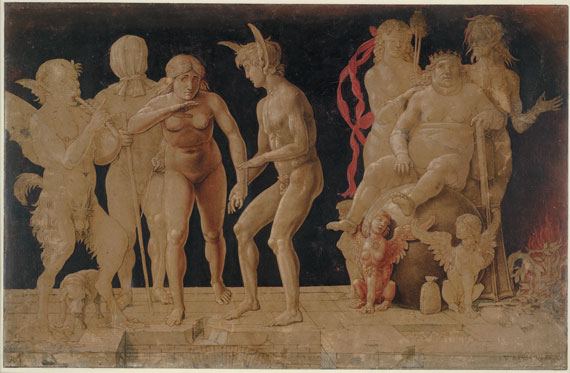 In the Florentine Renaissance (not so much in the Venetian one), drawing is prioritized in the creative process as well as in the artist’s training. But, as we learn in this exhibit, drawing is not always a product of study or in preparation for something in another medium; it can be a means to an end. There are finished drawings (not presentation drawings) that were not intended to be turned into paintings, for example the iconographically rich and highly finished Allegory of the fall of humanity dominated by Ignorance (circa 1490-1506) by Mantegna.

If you venture beyond this show and into the rest of the Uffizi Gallery, signage designed for the occasion shows the importance of drawing as a preparatory process in direct relation to some of the works on display; the goal of these texts is to ask the public to reconsider the relation between paintings and drawings.

Hugo Chapman, co-curator of the exhibit (from the British Museum), invites us to take a close look at these works that require us to diminish the distance between our noses and the gallery wall due to their size, detail, and technique. In the presentation to the press, he said something that I think makes clearer what I was saying in point #2 about reconsidering the role of drawing. Drawing can be an exercise or can be preparatory, or maybe… it can be more. Drawing is a window into the soul of the artist. As Chapman says:

It must be this joy that I feel coming through the yellowed brittle paper on which Leonardo energetically scribbled – he did scribble, really, with quite open loops. Some drawings (and aritsts) are less intense, but the personal, intimate connection is potentially there; we just have to get up close and look for it.

I will go back to see the exhibit at the Reali Poste; it’s a great thing to do on a lunch break or while shopping downtown with a friend. And I hope to have time to properly read the catalogues (yes, two catalogues – there’s a separate supplement for the part in the GDSU!) and write a longer blog post about the individual works that I like best. But just in case I don’t have time, I wanted to put up my photos and I will comment briefly below on the layout and collateral materials of the show. 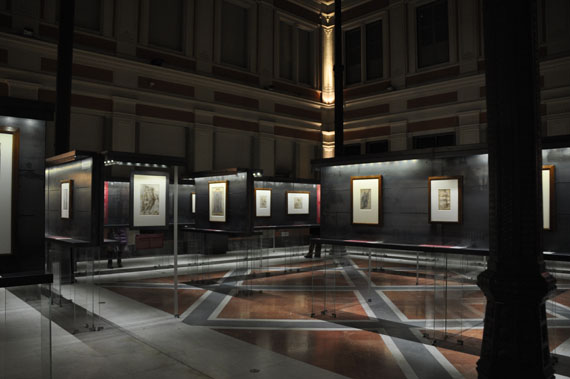 The Reali Poste at the Uffizi, display for Figure, Memorie, Spazio

In the small room of the GDSU, they’ve done away with the central panels that often hold works, which is a good thing to accomodate crowds and to make the space seem more welcoming. Unfortunately the old display cases are really dated; there’s not much to do about that though! In the Reali Poste, the space has been truly transformed from the pink, bright setup of the last exhibit in there. We are guided into a fascinating snail-shaped structure of metal and glass (I hope they can re-use these!), sent around the edges and spat out the center after a final hit of Leonardo. Panels that stand out into our space invite us to consider some of the most important works or those that are drawn on both sides.

Useful bilingual information is provided for every work with a fine effort to write in good English (I only found 3 errors). The traditional choice of printed signs over multimedia displays seems just fine, though there is no audioguide which might be useful for many visitors. I don’t see why the British Museum’s audio-guide could not be re-used. People aren’t that used to looking at drawings, and an audioguide really helps direct the untrained eye and makes people linger longer. The dedicated website by unannoadarte leaves much to be desired in comparison with the London counterpart (here), since it is only in Italian and has no audio-visual extras, let alone a behind-the-scenes blog written by the curator (Hugo Chapman is just so cool).

Overall, what makes this exhibit so great – aside from the content – is the fact that you can go back as many times as you want, which gives you the time and energy to really study each work for as long as you want.

Figure, Memorie, Spazio. Disegni da Fra’Angelico a Leonardo
March 8 to June 12 2011
Galleria degli Uffizi – GDSU (first floor) and Reali Poste (across the courtyard from the museum’s main entrance)
Oepn Tues thru Sunday, 8:15 to 18:50
Ticket prices for the Uffizi at this time are 11 euros for adults; reduced to 10 euros after 4pm.