Manifesta 12: A Biennale to Explore Palermo

Manifesta is a European nomadic biennial that, this year, in its twelfth edition, is being held in the Sicilian city of Palermo. The contemporary art event that runs from June through November 4 2018 takes place in various locations around the city, making use of numerous semi-abandoned spaces filled with densely significant installations; a combination that creates an almost overwhelmingly emotional visitor experience. The movement in and out of these spaces, from the contemplative space inside out to the hubbub of equally stimulating streets that alternate graffiti and rubble with patrician homes, transforms the city into a giant Biennial in which everyone is an active participant, be they aware or not of this fact. I explored Manifesta12 in between assignments for work alongside my friend and art director of Flod, Marco Badiani. The words in this article are mine, the thoughts are shared, the photos (mostly) his. 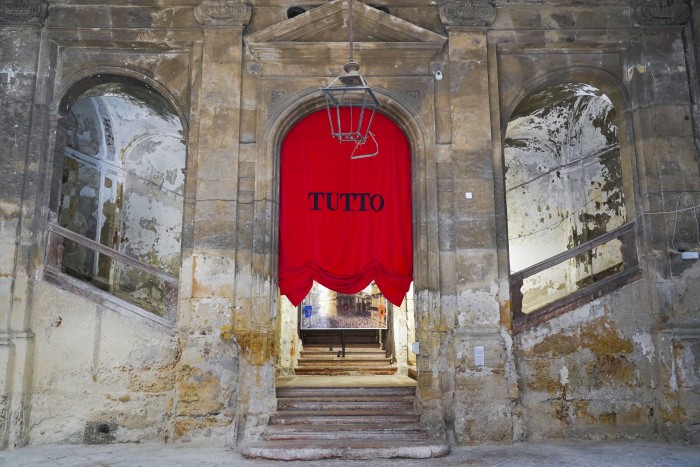 Founded in Amsterdam in the early 1990s, Manifesta’s initial goal was to “enhance artistic and cultural exchanges after the end of Cold War,” evolving subsequently into an interdisciplinary platform for social change. The choice of Palermo during its role as Italian Capital of Culture in 2018 creates an opportunity for the festival to connect its “manifesto” to current issues in the Mediterranean, primarily migration. Within this city that historically has always been dominated by other cultures and been subject to the whims of nature (as an island with an almost sub-tropical climate), the theme “The Planetary Garden. Cultivating Coexistence” opens up a myriad of possibilities to think about the cohabitation of cultures as well as of humans and nature. Below are some reflections on the works that most touched me, in locations that starkly contrast one from the other. 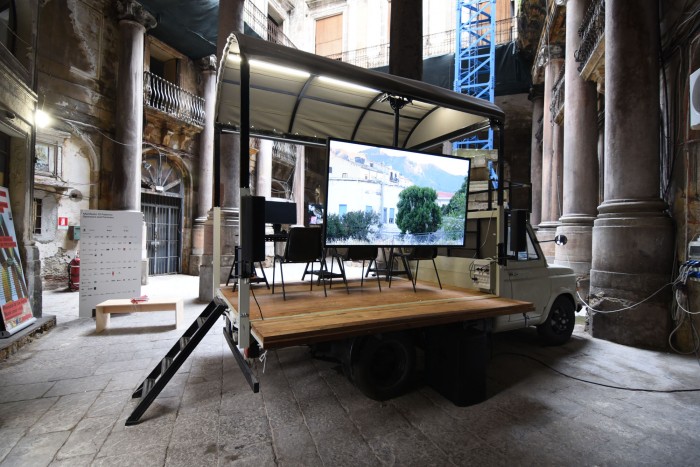 This 17th-century private palazzo is located near the famous Quattro Canti intersection of Palermo. A restored façade gives way to an interior courtyard that reveals a building in advanced state of disrepair; from here you can see into the upstairs, where precious frescoed ceilings are subject to the elements as there are no windows, and surely the stuccoes and maiolica floors aren’t faring well. Opened for the first time two years ago after 60 years of closure thanks to the Bilotti Ruggi d’Aragona family, the courtyard is sometimes used for cultural events like this. 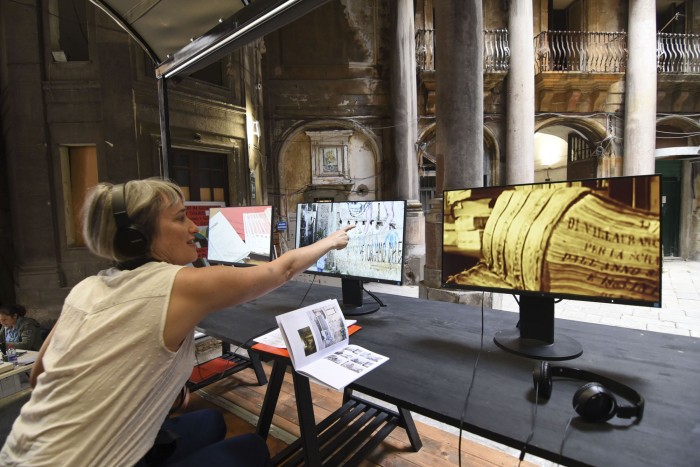 Me in the cinemobile | ph. Marco Badiani

Parked just inside is the most amazing “Videomobile” by MASBEDO (a collective). A 1970s van has been transformed into a video wagon to visit Sicilian places of cinema, record them and testimonials of their impact, and produce and project film. Visitors sit inside and can watch the group’s multi-channel documentary on three screens. It’s one visual orgasm after the next, with brilliant compositions to learn from and incredible locations, some of which you can visit due to the biennial. 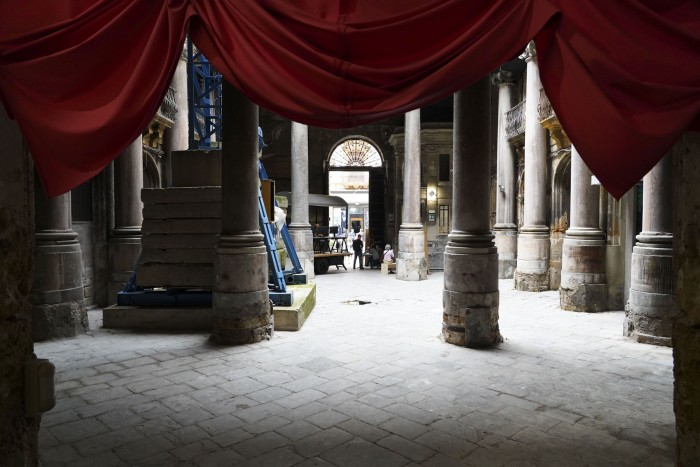 Behind the curtain of TUTTO (ph. Alexandra Korey)

Another piece I liked here is a drape with the word TUTTO, which is all that is left from a performance held at the Quattro Canti in which a series of colourful slips were blasted into the air during a daytime festival that drew from the Palermitan tradition around Saint Rosalia, the city’s patron. Interestingly, the wall text notes that the Tamil community participates in these rituals, an example of integration. Festivals and celebrations are explored here as a “tool to describe a wider system of political, social and cultural environments”. 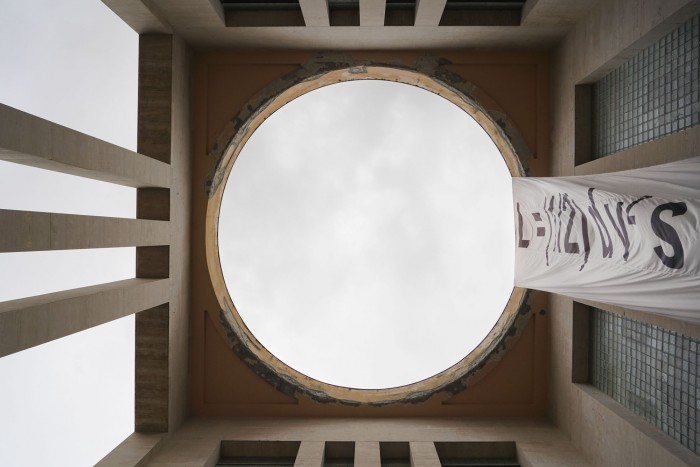 Numerous Fascist buildings dot the center of Palermo; almost all of them are permanently closed, silent and useless testimonies to a moment that we prefer to forget, in a city that can afford to leave them unoccupied since it doesn’t lack abandoned spaces. The “temple” part of the Casa del Mutilato was opened for the first time in 70 years for Manifesta12 and we spent quite some time in it. Designed in 1936 as a war memorial and meeting place for war heroes, other areas housed a medical clinic and warehouse and are still in use as offices. The “temple” was designed in the Rationalist style on the typology of the hypaethral temple (a roofless temple described by Vitruvius) using clear geometric language. Inscriptions glorify Mussolini, while wall paintings glorify the Italian troops. 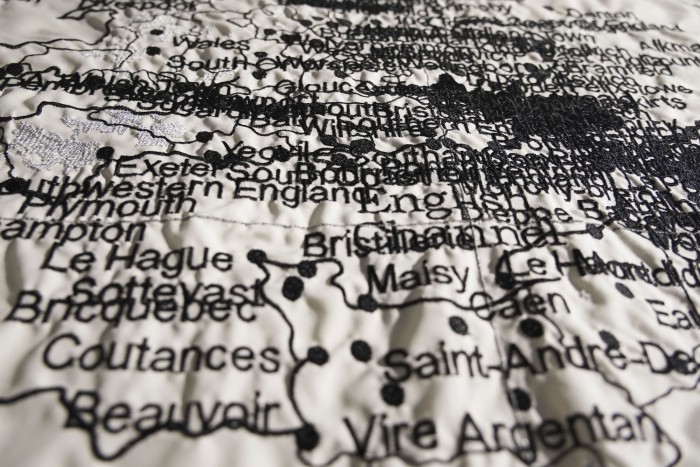 The work inside is an impressive project by Cristina Lucas (Spanish) that reflects on the human cost of wars and territorial disputes, including a focus on flight as a weapon. A large banner out front notes Newton’s third law, hanging on the building after having been flown behind a prop plane as part of a performance. A large screen shows a map and images of bombings around the world, showing the tragedy of civilian death in images, as well as in numbers gathered through five years of statistical research. I was particularly touched by an embroidered map of Europe indicating the names of the cities most struck by Allied bombs; contrasting the female and manual medium with the cold hard (male) fact. 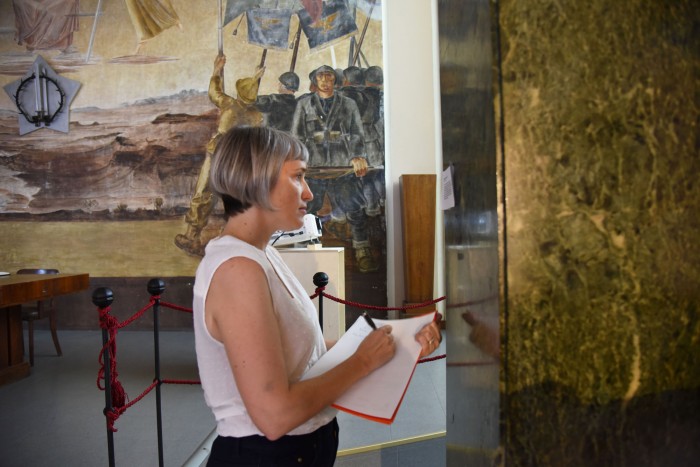 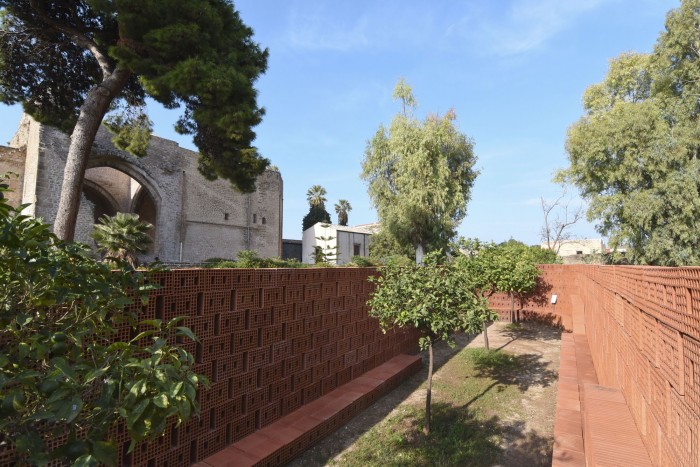 Lo Spasimo is a kind of Palermitan San Galgano, an open ceilinged church that actually was this way because it was never finished due to diverted resources in the first part of the 16th century. The roofless church hosts cultural events on occasion while the garden behind is currently hosting a fantastic site-specific work called Cooking Sections that explores the reapplication of ancient Sicilian options for agricultural irrigation using terracotta stones and plants. 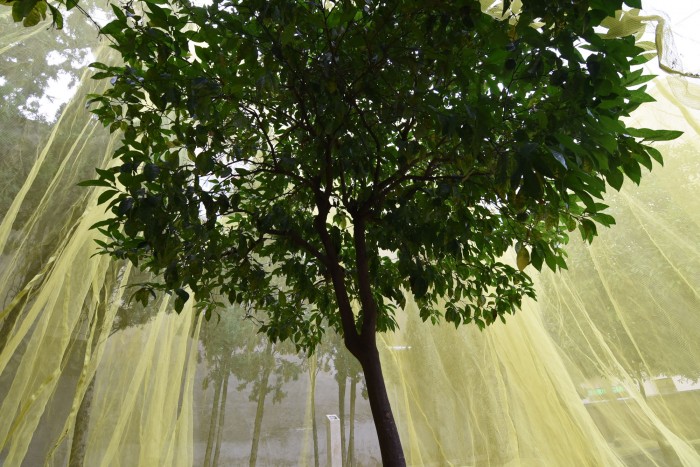 Palermo’s late 18th century Botanical Garden is a marvel any time of year, and particularly so on a warm October afternoon just before sunset (pro tip, bring mosquito repellant). Navigating its avenues lined by centuries-old rare trees, with the sound of tropical birds ringing in your ears, it’s almost hard to distinguish the artistic installations from this man-made exemplar of nature.

A hut grown with hanging gourds reminds me of a sukkah hut constructed in the Jewish festival of Sukkot, celebrated in autumn and requiring a temporary space with a natural covering. In truth it’s a work by Florentine artist Leone Contini called “Foreign Farmers” that explores the food needs of migrant communities. The wall text mentions something significant: “Seeds are by definition migrants,” which got me thinking about how we often embrace imported foods more than we embrace “imported” people. 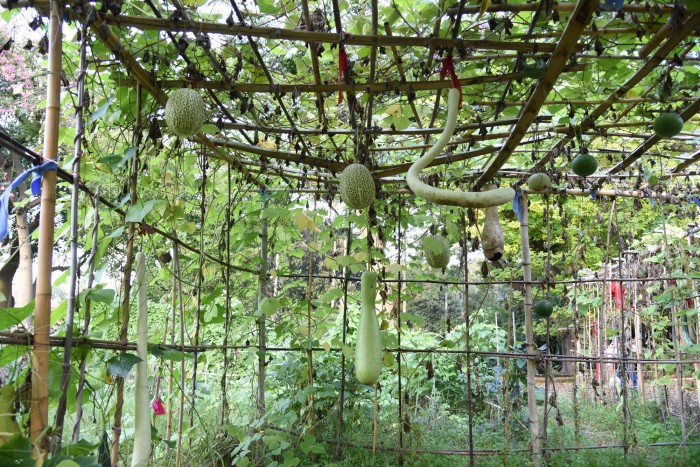 Two other installations in the garden caught my eye. In one of the Neoclassical buildings, “Palermo Herbal” by Malin Franzén uses a 17th-century method of pressing plants to create contact prints, applied to plants that are able to live in areas infected by toxic substances. The display is particularly interesting. 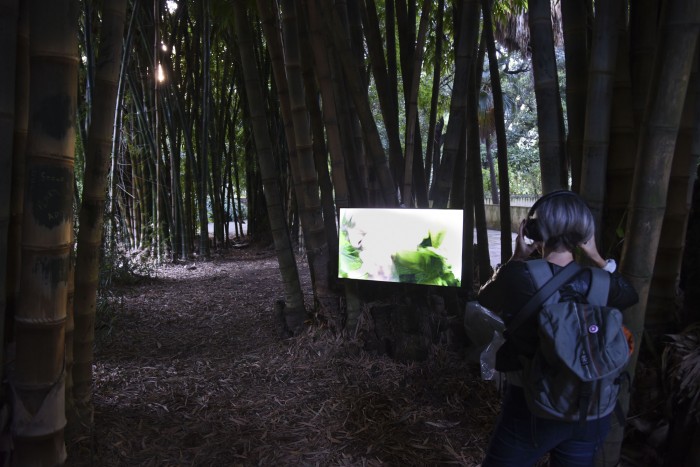 In the depths of the botanical “jungle”, amongst bamboo shoots, is the semi-pornographic work of Zheng Bo that explores an “eco-queer” theme: Pteridophilia – intimate contact with ferns. I don’t know if this is a thing or not. In the video which you can see and listen to inside a bamboo forest, seven youths get aroused in a Taiwanese forest, where ferns are abundant and not particularly appreciated. The apparent moral of the story is to learn to appreciate the complex existence of all living things. 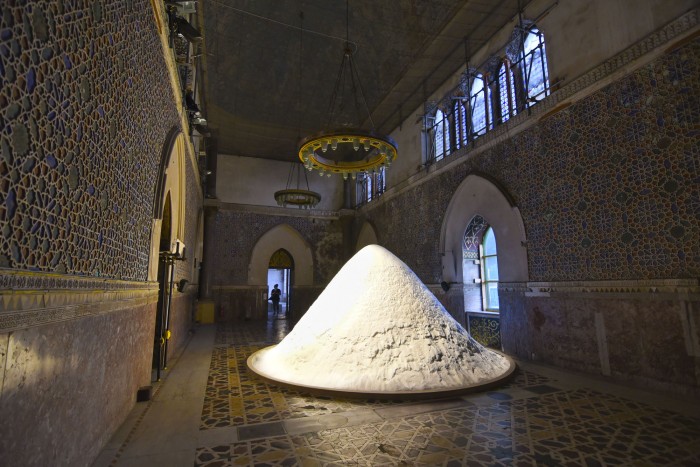 The decadent yet degraded Moorish decorations of Palazzo Forcella de Seta make it an incredible location for installations and video, while Palazzo Butera, in less good condition, becomes a kind of video jungle. Marco’s greater energy levels permitted him to visit these when I couldn’t walk any longer. These are his beautiful impressions. 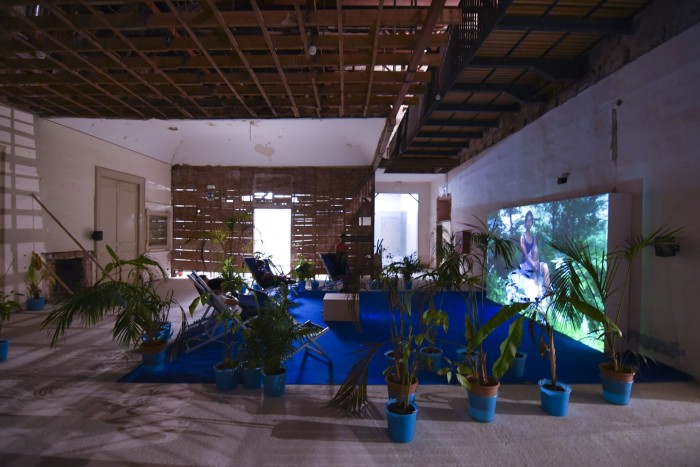 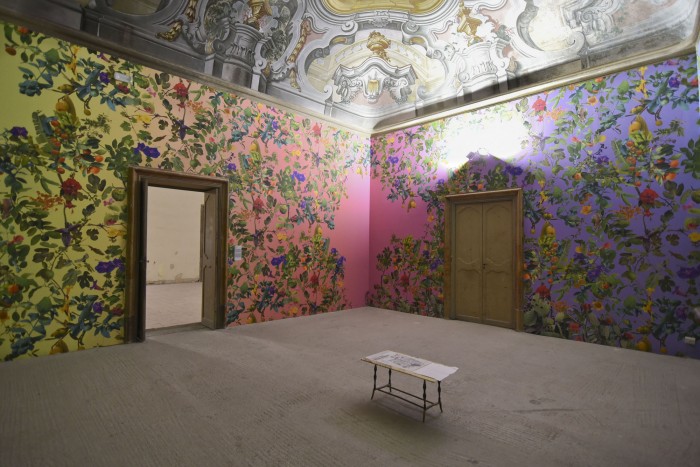 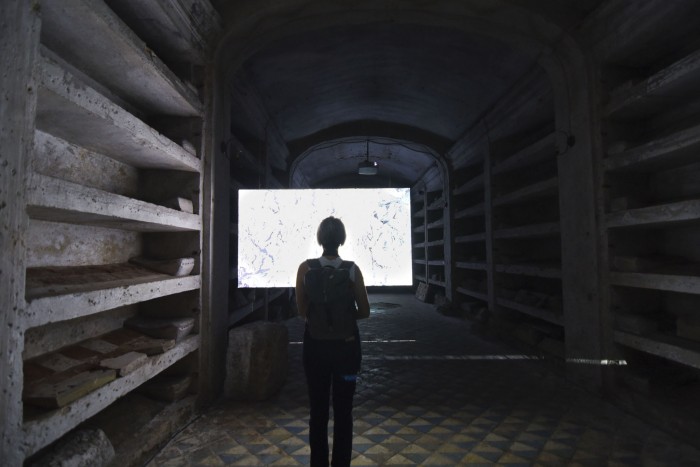 Manifesta12 also includes a series of Collateral Events, as well as locations outside of Palermo, in particular around Bagheria, that I wish I could have seen. A week would have been possibly the right amount of time to take it all in, though I think it would have become even more overwhelming. I did want to note one Collateral installation that I found particularly relaxing: Nina Doevendans’s Transcendence located in the (creepy) crypt of the super Baroque church of San Matteo al Cassero includes a soundscape and a series of screens showing what looks like amoeba slowly moving around. Stare it long enough and you get the work’s declared Platonic philosophy that could sum up both life and this Biennial. Plato speaks of the sensory world and the world of ideas. In a world in which we are always running and trying to take in and do more and more, we need to take a moment to stop and reflect. Staring at these screens, senses entirely taken by them and the music in a darkened space is a moment of almost trance-like contemplation, a moment that we need in this day and age to digest and understand the stimulus around us.