Jane Fortune is the strongest woman I have ever met. The founder of Advancing Women Artists, born 1942, succumbed recently to ovarian cancer after a long battle that gave her – and us – numerous “bonus” years in which she continued to research, write, and self-effacingly do everything to make women artists seen, when others might have opted for rest and retirement. Amongst her highest achievements, she was recognized, in 2015, with the Fiorino d’Oro by the City of Florence, making her an honourary citizen for her dedication to this city’s artists and for restoring so many works of art by Florentine women. On October 9, 2018, she will be honoured in a memorial ceremony at the church of Santa Croce, the Florentine pantheon of the greats, where thinkers and artists like Leonardo Bruni, Dante and Michelangelo are also remembered. Here, I reflect on my own memories of Jane, and share with you the recently opened exhibition promoted by AWA that Jane didn’t get to see. Go see it, for her. 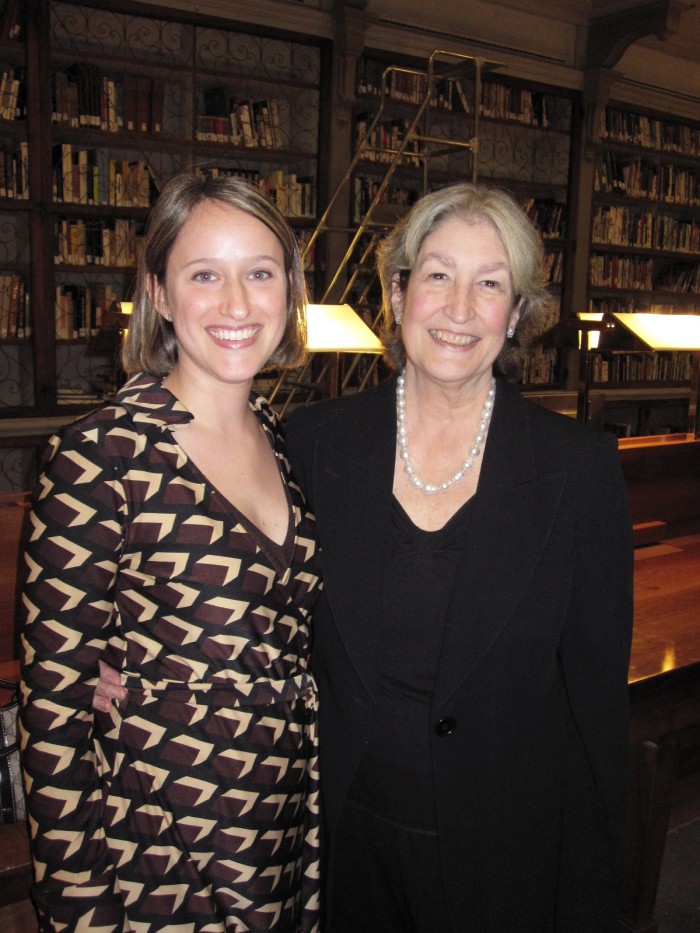 Jane Fortune graciously posed for this photo with (a skinny and young!) me on November 20, 2009.

I first encountered the world of Jane Fortune at the presentation of the first restoration she ever sponsored. It was Artemisia Gentileschi‘s David and Bathsheba, presented at the American Consulate in May 2009. I think I was invited to attend by my friend Nina. At the time, about five years into her archival research on women artists in Florence, Jane was Founder and Chair of the Florence Committee of the National Museum of Women in the Arts; soon after, she founded her own non-profit association, AWA. Despite being by probably the most famous female Italian artist – the one most people could name – Gentileschi’s canvas was unknown and damaged from improper storage and overpainting. The controversial restoration left only the marks of the artist’s brush, but half of the face and one eye of the protagonist were missing; this was carefully masked to preserve the integrity of the original but increase legibility, revealing an elegant and important painting that was the model for many more on this topic. I wrote this article about it – where you can see I was still very much in my art history mode, only two years out of the doctorate program.

In November of the same year, I was contacted by the owners of The Florentine news magazine, Marco Badiani and Giovanni Giusti. They were publishing a new book as their press, The Florentine Press, about women artists. Would I like to come to the presentation and review the book for the next edition of the newspaper? I met the explosively enthusiastic Marco at this event. It was November 20, 2009. As we sat down, he handed me an unmarked envelope as if it were an important secret to be kept. I wrote this rather dry and academic review of Jane Fortune’s book Invisible Women – at the time I was still a dry academic – in which I noted with admiration:

Fortune’s book brings to light many artists about whom I had never heard, despite being rather up to date on the scholarly bibliography in this field. Recent art history has paid quite a bit of attention to early sixteenth-century Italians such as Artemisia Gentileschi, Lavinia Fontana and Sofonisba Anguissola. That the names Giovanna Fratellini, Arcangela Paladini and Teresa Berenice Vitelli are less known reflect not only the struggle of the female artist, but also the fact that Tuscan artists of seventeenth and eighteenth centuries are not on publishers’ hot lists.

At the time, I was just coming out of my first year as a professor of art history. I had decided that I didn’t want to teach study abroad after all. My blog was getting noticed, and I’d been contacted to work on the region of Tuscany’s social media and digital tourism promotion campaign. At the time I was “a bit of both” – art historian and blogger, unsure of my future. Little did I know, that encounter with The Florentine would turn into my career. A year later, Marco told me about their newly founded communications company, Flod, and in February 2011 I started working there; over the years, Marco and Giovanni would become not only my “bosses” or rather partners, now, but also some of my closest friends. 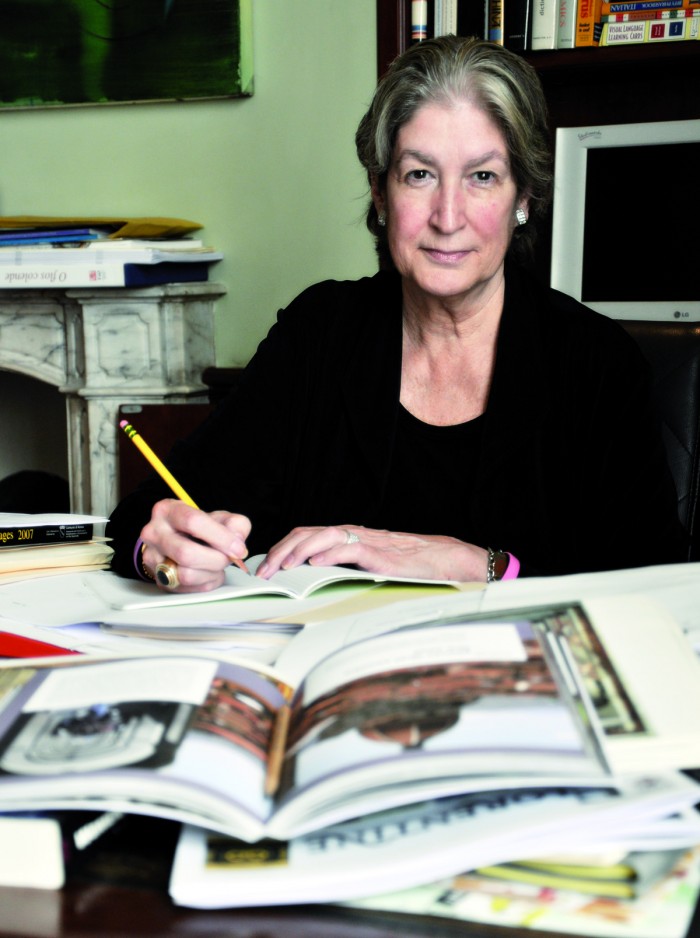 Jane writing, in a photo by Marco Badiani (note The Florentine and other books by TFPress in the foreground)

Like everyone at Flod at the time, we all contributed in various ways to the newspaper and the press (lately, my role at Flod has become so important that it’s hard to find time for The Florentine, which has its own leadership and continues to generate excellencies). Although I had little direct contact with Jane over the years, I worked closely with her right-hand-woman Linda Falcone, Director of AWA in Italy and co-author of many of her books. Invisible Women was made into a documentary that won an Emmy award which we screened at the Odeon theatre to a full house and a very emotional speech by Jane. We published more books by Jane and Linda. But, perhaps the most exciting project I contributed to for AWA was the creation of the crowdfunding to restore Nelli’s Last Supper, the foundation’s first digital project, designed both to raise money for restoration and to build a wider and younger fan base for the foundation.

Jane left a legacy to all of us – you can read of her many achievements here – but also touched each of us in her own way. I am realizing only now that somehow, Jane changed the path of my career. 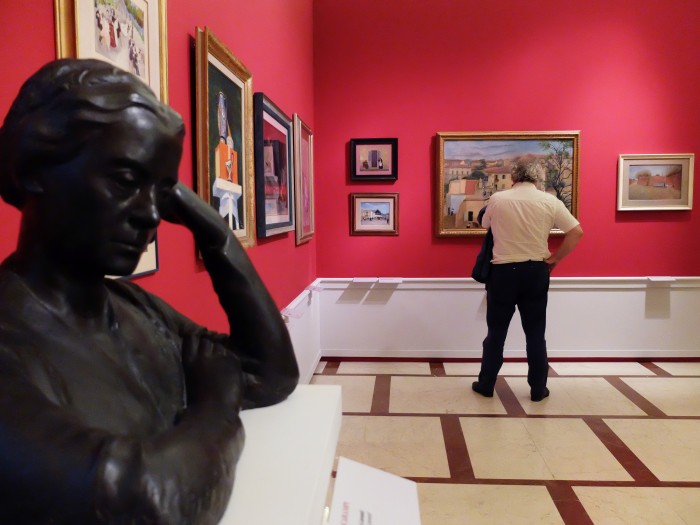 The exhibit at Fondazione CR Firenze

The Friday before Jane passed away, my colleagues and I attended the opening of the exhibit Artiste. Firenze 1900-1950 at the headquarters of the Fondazione Cassa di Risparmio in via Bufalini 6, Florence. It’s part of the Fondazione CR Firenze’s festival, Heritage of Women (L’eretità delle donne), and co-organized wtih AWA, with the help of the cultural association Il Palmerino – long time collaborators for the exhibition of modern women artists’ works – and the Vieusseux library. Jane always wanted a permanent exhibition space for women artists in Florence, and so far has succeeded in ensuring that the works her foundation restores remain on view once restored (there are a few at the Novecento museum in Florence), as well as in contributing essential works to important shows like the one dedicated to Plautilla Nelli at the Uffizi in 2017. This prestigiously located exhibition focuses on interwar Florence, in particular on two female artists, Fillide Levasti Giorgi and Leonetta Cecchi Pieraccini, and on other women artists in their circle. The show features eight newly restored paintings from the Uffizi’s Gallery of Modern art and the Gabinetto G. P. Vieusseux. 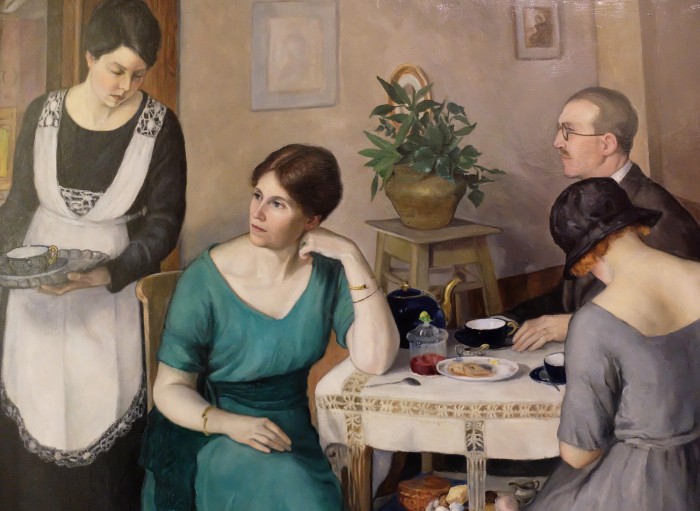 Leonetta and Fillide were close friends, both students of Giovanni Fattori, and both married to culturally important men. Their works reflect the cultural and social world of women at the time, with still lives and portraits as well as images that depict domestic life within family walls and just outside their windows. 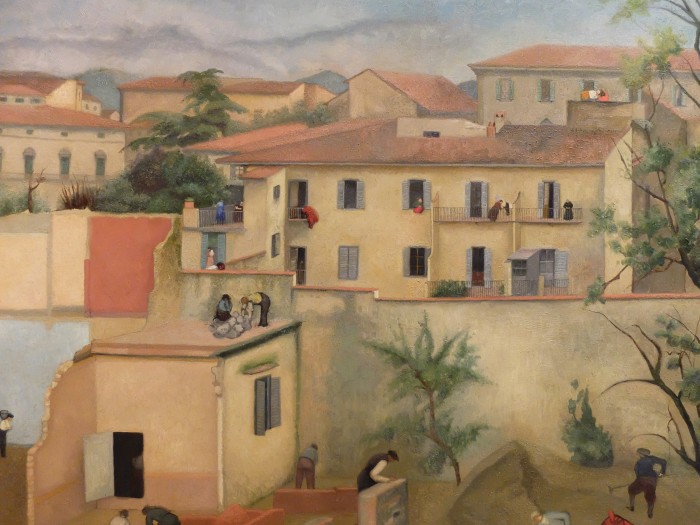 Many are quite charming, and show good mastery of the brush. But being artistic masterpieces isn’t the goal here, is it? As Jane reflects in her introduction to the catalogue – in a statement I find particularly poignant right now:

“We must move forward in our efforts to bring the art of women from storage into the public gaze, shining a light on the trials and the whimsy of the artists that touch our hearts as well as our minds. Will these art works always reveal mastery? No. What they will reveal is the need to transform and record the human experience, for it is through this yearning that we will reach the end and the beginning of our own creative quest.”

This is the end of Jane’s quest, but not of AWA’s, a legacy that Jane structured so that we may move forward with this effort, with AWA to guide us, but also each of us in her own way. 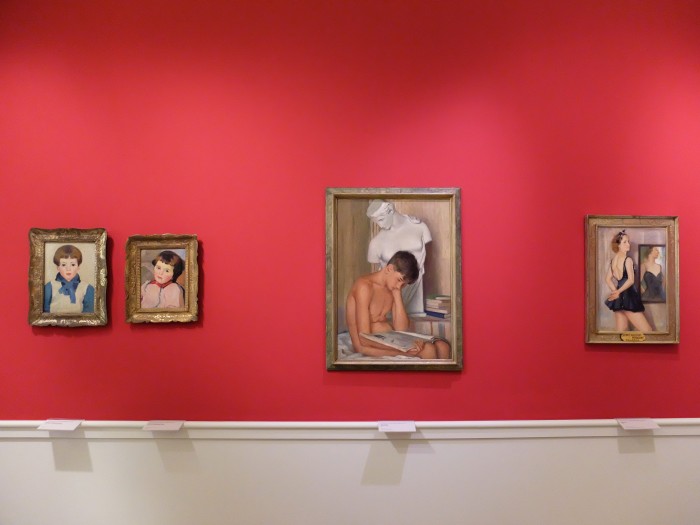 Another view of the display

Jane Fortune’s Florence mass will be held on October 9, at 6pm, at the Basilica of Santa Croce and is open to anyone wishing to pay respects. In lieu of flowers, contributions to Advancing Women Artists (AWA) would be appreciated. You can support the restoration of another important work of art here.