After roaming the great city of Naples, you can spot the differences between sfogliatella riccia and frolla, know what “Spacca Napoli” means, and can talk for days about the “blood miracle” of Saint Januarius. But there’s one more thing in the area that you certainly must see: visit the ancient cities of Pompeii and Herculaneum from Naples. These two ancient Roman cities were buried in ash following the eruption of Mount Vesuvius in the year 79 and are considered among the most important archeological sites in the world. Both Pompeii and Herculaneum are UNESCO World Heritage Sites and were both preserved in a state “suspended in time,” as the cities were catastrophically destroyed rather than abandoned over the centuries – everything stood still that night, making them one-of-a-kind, fascinating places to see today. 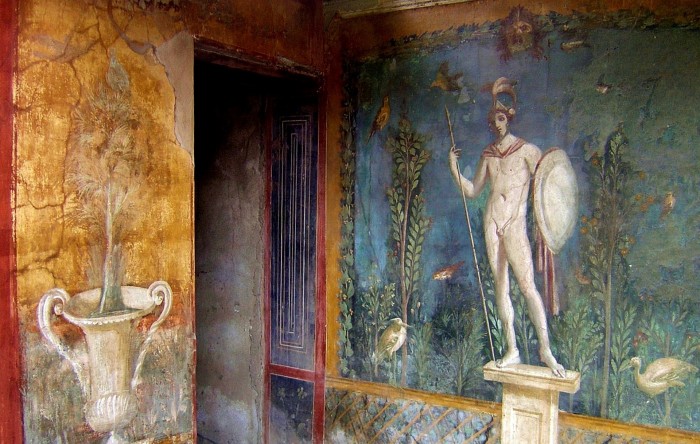 Pompeii: What to see and do there

Pompeii was among the largest and most magnificent cities during the Roman era; due to its healthy climate and pleasant scenery, it was a popular holiday destination for the Roman elite. Now, the city sleeps under volcanic dust and remains incredible evidence of the ancient lifestyle. 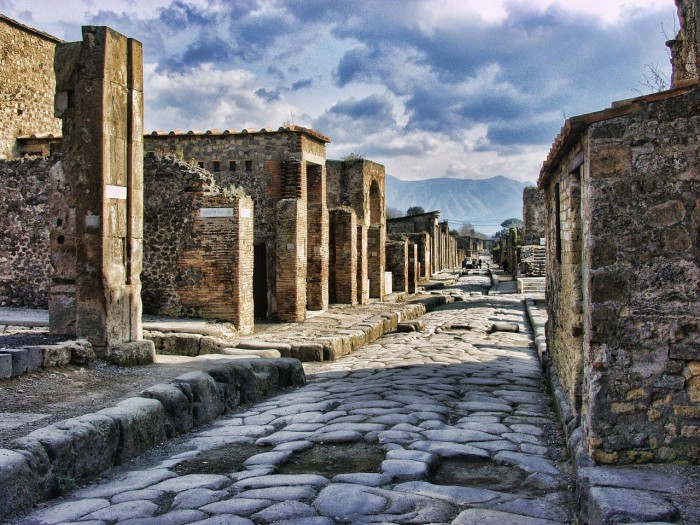 A street in Pompeii | Image from Pixabay

Start your visit at the Porta Marina entrance and head to the Forum, which was Pompeii’s commercial, political and religious center. This was the place where all the public debates and religious events were held, the real beating heart of the city. At the center of the area you’ll find the Temple of Jupiter – the most important temple of ancient Pompeii. Although its name stems from the most prominent of the Latin pagan gods, it was also a site of worship for the gods Juno and Minerva. Three large statues of these three gods once graced the front of the temple, while the original frescoed walls depicted the stories and legends surrounding the three pagan figures. The site was partially destroyed during an earthquake and was still under construction at the time of the eruption.

At the northern side of the forum, the Temple of Apollo remains one of most ancient buildings in Pompeii. The cult of Apollo, imported from Greece, was very widespread in the Campania region until the arrival of the Romans, when the cult of Jupiter came to power, so for many centuries this temple was the most important place of worship of the polis.

Continue your walk along Via Dell’Abbondanza – keep an eye on the city walls to spot ancient graffiti – until you reach the Amphitheatre, where, just like the Colosseum in Rome, gladiators took part in bloody battles against lions and other ferocious animals. In 1971, in this timeless setting, Pink Floyd recorded their legendary “Live in Pompeii,” the most iconic concert in rock music history (seriously, my dad still cries every time he watches it). 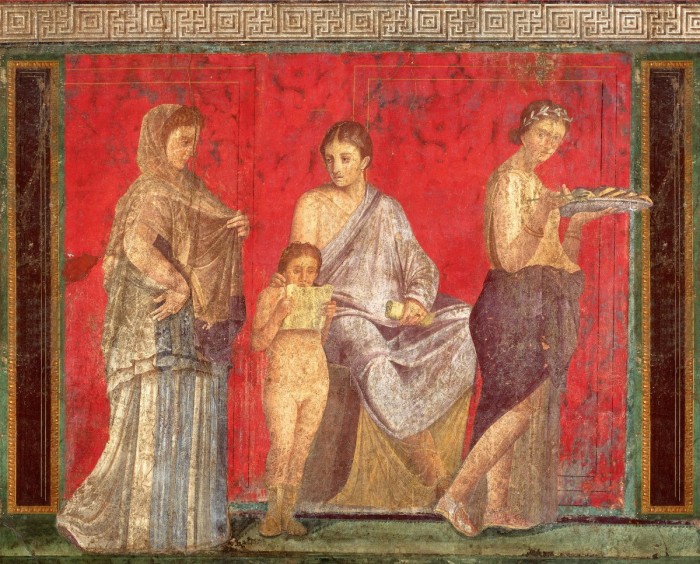 Continuing on your journey, you’ll find the House of the Faun, which was a huge complex with rooms, shops and areas dedicated to a variety of tasks. The center square vaunts an extravagant fountain adorned with a bronze statue of a dancing faun, hence the particular name. Head to the Villa of the Mysteries to admire a beautiful fresco, so enigmatic in nature that experts remain unsure of its meaning. The walls depict a young woman being initiated to a cult; some scholars believe that she’s being initiated to a Dionysian rite, while others simply believe it is a form of preparation for marriage. The villa once had many frescoed and decorated rooms which were for mostly used for dinners and social events. 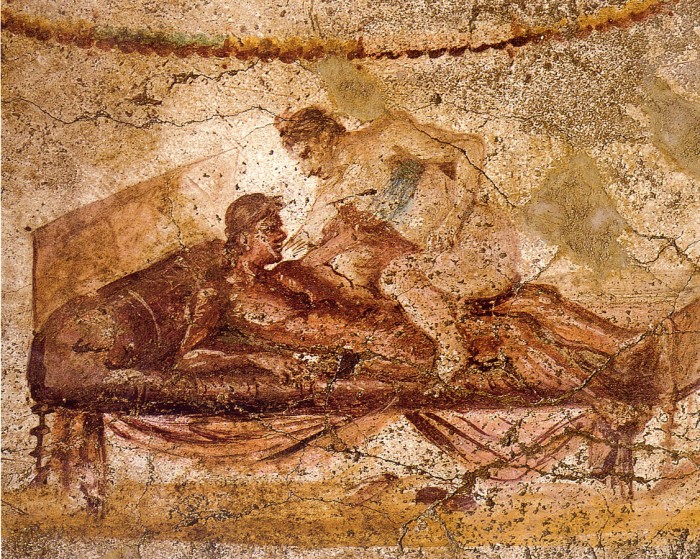 As good pagans, the people of Pompeii also greatly enjoyed the pleasures of the flesh, so many houses had secret rooms where slaves of wealthy masters sold their “company” for eight or nine “assi” (the period’s currency). Walk down the main street and up the hill (which is not too far!) to reach the Lupanar, the most famous brothel in Pompeii, and the only building built for this purpose and one that still has its racy wall decorations. The ground floor was reserved for lower classes, while the first floor was an exclusive spot for the upper classes. There was also a shop where customers could buy ancient condoms, towels and everything they needed for their stay! Before you leave, make sure to pay a visit to the Necropolis as well, where you’ll find beautiful tombs and ossuaries – you’ll have to walk a bit uphill, but it’s completely worth it!

Herculaneum: What to see and do there

The archeological site of Herculaneum is much smaller and easier to visit than Pompeii, but still offers major insight into the ancient Roman world; if Pompeii was the Hollywood of the Roman elite, Herculaneum was their Malibu. It boasts an impressive array of striking residences, including the Villa of the Papyri, a stunning seafront residence believed to have belonged to Julius Caesar’s father-in-law. Its luxurious feel can be discerned in the fine art, which includes frescoes, bronzes and sculptures. 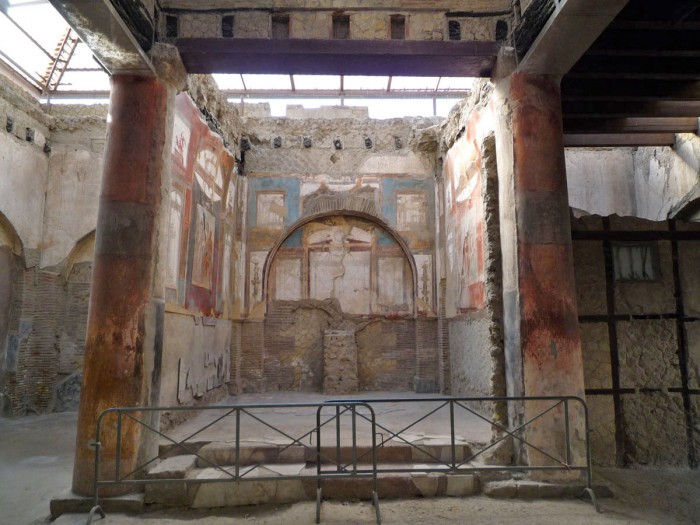 Like Pompeii, it was buried under the eruption of Vesuvius in the year 79. Excavations of this site began in the mid 18th century and what we now see is only the part of the inhabitation that extends inland from the sea; the forum and other areas are underneath the modern town. Herculaneum is unique because there are preserved wood, papyrus, and other organic materials; as well, unlike Pompeii, the weight of the ash seems not to have caused all the buildings to collapse, so there are two-story buildings with wooden second floors.

Saccello degli Augustali (Shrine of the Augustals) was Herculaneum’s main temple and the location of all religious functions. The House of the Mosaic of Neptune and Amphitrite also boasts an impressive variety of well-preserved wall mosaics, while at the House of the Deer you’ll find a spacious area divided into three naves, like a cathedral, the only one of its kind in the area. If you have some extra time and want a full-on experience of the Roman Empire’s magnificence, pay a quick visit to Torre Annunziata. Here, you can explore a villa that originally belonged to a famous woman named Poppea Sabina, the second wife of the Roman Emperor Nero. The villa is famous for its ornamentation and décor, adorned with a swimming pool that exceeds any others in size.

Pompeii & Herculaneum: How To Get There from Naples

City Train: The fastest and most affordable way to get to Pompeii and Herculaneum from Naples is on the Circumvesuviana train. A network of several lines crosses the region, with Naples serving as the central hub. The line to Herculaneum goes from Naples to Sorrento and stops at Pompeii along the way. Once you’re at Napoli Centrale, the city’s central train station, follow the blue signs for the Circumvesuviana train, which you’ll find in the lower section of the station. Along the way, you’ll pass ticket counters and machines; some don’t accept credit cards, so be prepared to pay

cash. The tickets are extremely affordable: 2 euros for Pompeii, 2.90 for Herculaneum, though I suggest buying a daily ticket (4.50) that will provide 24 hours of unlimited rides around the city. Trains leave twice per hour and run until late at night. These essentially serve as commuter trains, so you’ll find the experience to be closer to a city metro than a standard full-size train. These transportation hubs tend to be fairly crowded, especially during rush hour and summer weekends (with youths going to the beach), so be prepared to stand for a good part of the journey… it’s all part of the experience! The train will eventually reach “Pompeii Scavi” after a 20-minute journey (be careful not to leave the train at the “Pompeii” stop unless you want to walk for 20 minutes!), while the journey to Herculaneum will take about 30-35 minutes.

Regional Train: Another option for reaching Pompeii and Herculaneum tours from Naples is taking a Trenitalia regional train. This train leaves from the main level of Napoli Centrale (and NOT the lower level, where you’ll find the Circumvesuviana train) and departs every hour, stopping at both Pompeii and Herculaneum. Once you arrive, you’ll have to walk 10 minutes to reach the archaeological sites (don’t worry, bus options are also available).

Bus from the airport: If you’re hoping to reach Pompeii (but not Herculaneum) from the airport (where you can leave your luggage: Napoli Capodichino has a great luggage storage service!) you should opt for the SITA Napoli-Nocera-Salerno bus line, which reaches the “Pompeii Scavi” stop in about an hour’s time.

Car: Reaching Pompeii by car is a breeze: simply drive down the A3 highway until you reach the Pompei Ovest exit, which leads directly to the archaeological park entrance. You’ll find a number of parking lots near the entrance, but keep in mind that lots with white zones are for residents only. Getting to Herculaneum by car is little trickier, as you’ll have to drive through the center of the modern town (a cute stop worth a quick visit or shopping spree) to reach the entrance.

Pompeii and Herculaneum: what to eat and drink

While you’re here, be sure to spend your lunch break or dinner at one of the many trattorias in the area to get a taste of local food – but stay away from the tourist traps right near the archaeological site. A treat to definitely try is caprese prepared with fresh buffalo mozzarella, corbarino tomatoes (a special variety cultivated on the slopes of the Antari Mountains) and basil, paired with Pompeiano Rosso IGT wine. Pompeii and the Vesuvius area are also famous for graffe, a special variety of donuts prepared with fried potatoes dipped in sugar. Limoncello is the perfect treat to end your typical Neapolitan-Pompeii meal and celebrate your stay in Campania.

Vincenzo graduated in Languages, Literature and Intercultural Studies from the University of Florence with a thesis on the English and Italian Languages of Tourism. He now works at the communications agency Flod where he is an expert on social media content for millennials.