Dana Facaros and Michael Pauls have written over 40 guidebooks to Europe for Cadogan’s, and are now focusing on a series of intelligent apps called “Art and Culture”. The first, a guide to Venice, combines great travel writing, in-depth analysis of cultural monuments, and the convenience of app technology. It’s an honour to have them share some of their knowledge of Venetian churches with us in this article.

Beyond its transcendent beauty, Venice is one of the most fascinating and quirkiest cities in the world, with its larger than life characters, its unique system of government and original ways of doing things. Some of the city’s quirkiness can be read in its churches: here are five lesser-known, unusual Venetian churches to contemplate. 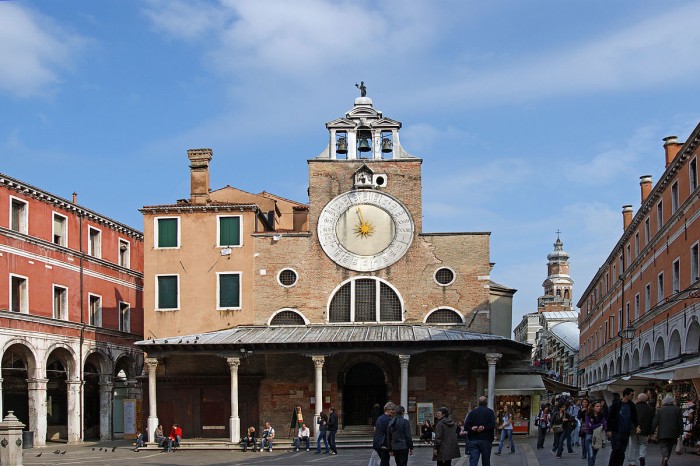 They say San Giacometto di Rialto was the first church built in what is now Venice, perhaps as early as the 5th century. In 1097 it was rebuilt in conjunction with the Rialto markets, then fiddled with over the centuries until the end result resembles an overgrown mantelpiece clock. Installed in the 15th century, the clock’s 24-hour face has shown the wrong time ever since it was built: its hands get stuck in the same place for so long that art historians have dated scenes of Venice by the time shown on it.

The porch, the only survivor of a type once common in Venetian churches, provided shelter for the wheeling and dealing Rialto merchants, who were constantly reminded by a 12th-century inscription in the apse: Around This Temple Let the Merchant’s Law Be Just, His Weight True, and His Covenants Faithful.

Back in the day, the surrounding Campo was the business heart of the Venetian Empire. There used to be a lot of gold hidden behind its Renaissance arcades, for along with offices of trade and finance they also housed the Banco Giro. Founded in 1619 and completely government-owned, it has been called the ‘world’s first central bank’, providing liquidity for merchants, and also financed the debts of the state. Napoleon shut it down in 1807.

Opposite the church, the arcades shelter the 16th-century granite figure of the Gobbo (‘Hunchback’) di Rialto, with steps up to a stumpy column, the Pietra di Banda, where news and the decrees of the Republic were read to the people. The Pietra has a twin in Piazza San Marco, and all announcements were read from both simultaneously—so that no merchant or sea captain, whose fortunes often depended on the news, would have an unfair disadvantage from being in the wrong place at the wrong time.

This church was founded in 947 by patrician Moisè Venier and dedicated to his namesake, ‘Saint’ Moses. Because of Venice’s early links to Byzantium, the city is fairly unique in the West to have churches dedicated to Old Testament figures; ones to Zacharias, Job, and Samuel still stand, while Jeremiah, Daniel and Isaiah’s churches, like so many, were demolished over the centuries.

San Moisè was rebuilt between 1632-68 by Alessandro Tremignon and sculptor Heinrich Meyring, who were compelled to address the horror vacui of their patrons, the Fini brothers who paid 30,000 ducats to have busts of themselves immersed in a carnival of swags, virtues, allegorical figures and even a pair of camels (the lack of any religious symbolism isn’t that unusual in Venice; a church façade was one of the few places where a wealthy patrician could toot his own horn). In a way San Moisè reflected the surroundings of the day that included an opera house and the wildly popular state casino, or Ridotto, where nearly all the players wore masks.

Meyring also sculpted the high altar, which might be unique in Christendom, consisting of a rock pile with wild gesticulating figures representing St Moses on Mount Sinai. Over the left door, skeletons leer on the Halloween tomb of one Canon Ivanovich. The most famous tomb, however, is near the entrance and belongs to the Scottish financier John Law, who single-handedly blew up the national economy of France with his Mississippi Company when it collapsed in the South Sea Bubble in 1720, then spent his latter days in Venice trying to gamble back his fortune in the Ridotto.

San Pantalon: the church with the maddest ceiling 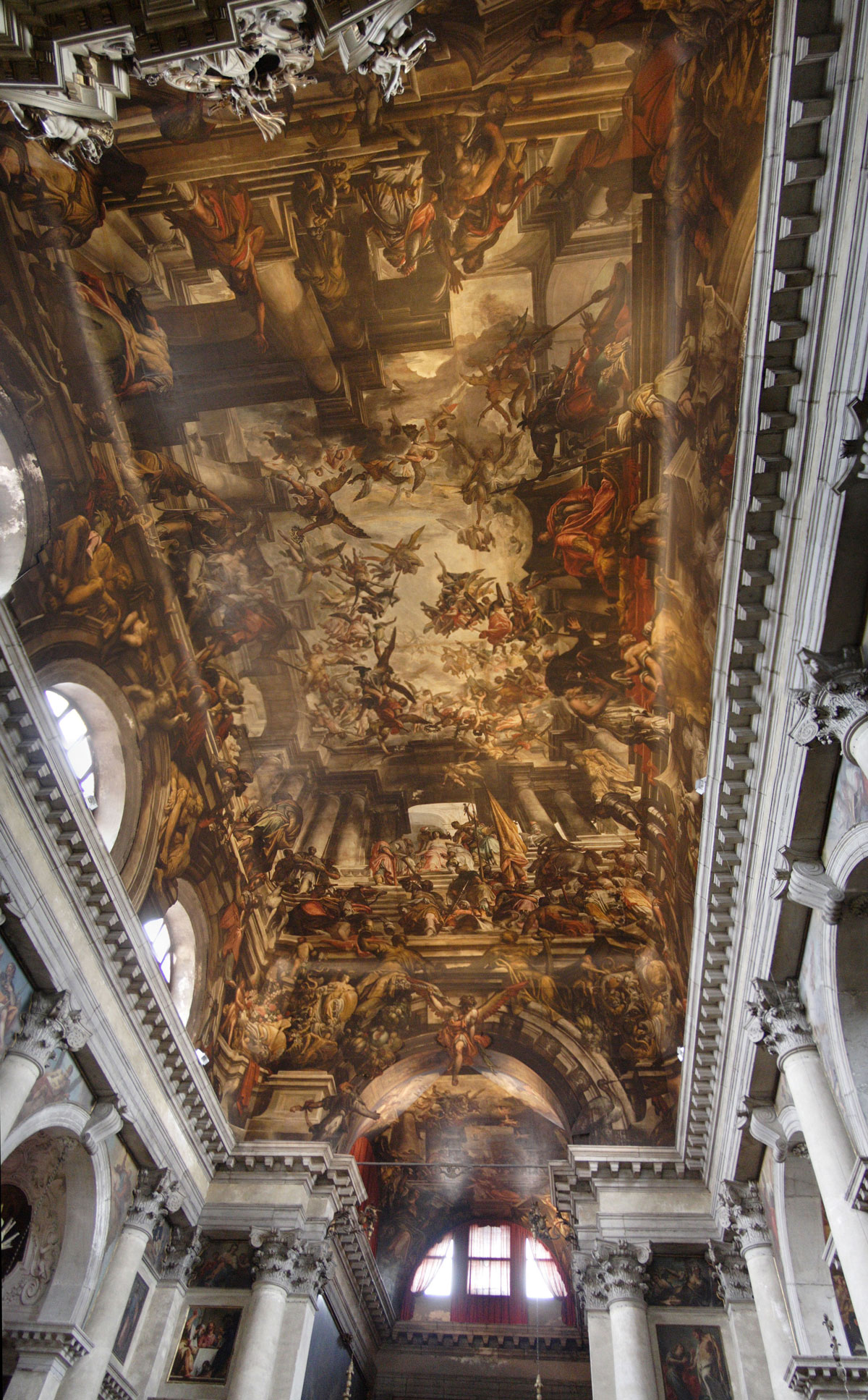 Unlike the bombastic façade of San Moisè, San Pantalon’s unfinished front in Dorsoduro rarely lures in passers-by. Which is a pity, because it contains The Miracles and Apotheosis of San Pantalon, perhaps the most extraordinary trompe l’œil ceiling in Italy, by the otherwise little known painter Gian Antonio Fumiani who spent 24 years on the job, completing it in 1704.

San Pantalon contains some excellent smaller paintings as well– by Veronese, Paolo Veneziano, Antonio Vivarini and Giovanni d’Alemagna, and an endearing fresco fragment of the Virgin and Child hanging out in a cloud with a pair of angels, a rare (perhaps only) church commission by Pietro Longhi, the master of daily life in 18th-century Venice. It also has a plaque with the minimum measurements for different kinds of fish, embedded in the church wall to keep market traders honest.

Santa Maria Maddelena: the esoteric one 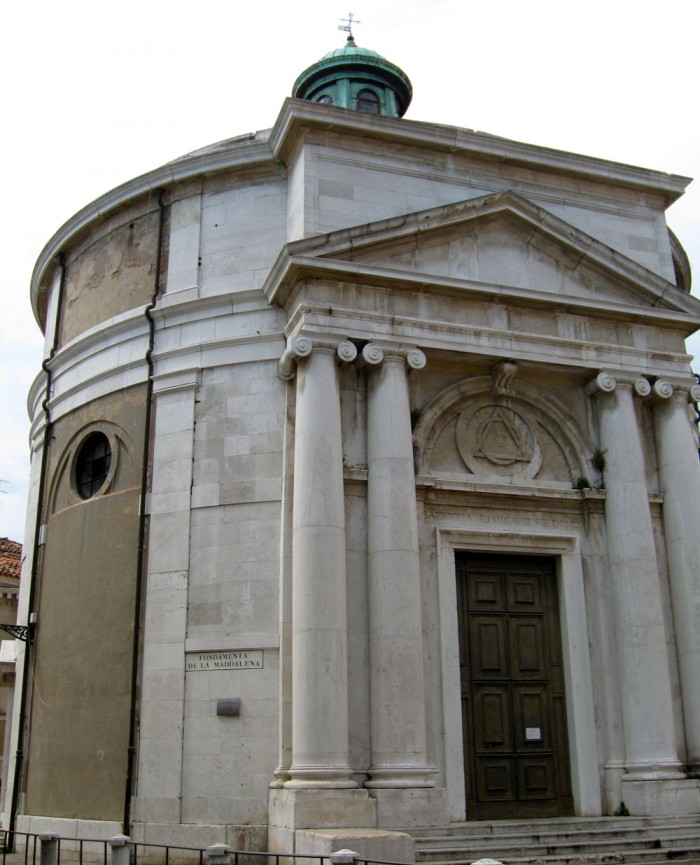 Architect, scholar and author of a biography of Palladio, Tommaso Temanza (d. 1789) didn’t have the do-re-mi of the Fini family to go hog wild on frilly bits when he built this oddball round church in Cannaregio as a mini-Pantheon to himself. By all appearances he was also a dabbler in Free Masonry, judging by the ‘eye of God’ and Latin inscription (“Wisdom has built a Home for itself”) over the door. There are a couple of paintings inside the hexagonal interior (including one by Giandomenico Tiepolo), along with Temanza’s tomb, but the best chance of finding it open is during the Biennale, when it occasionally hosts exhibitions.

Angelo Raffaele: and its proto-Impressionist masterpiece 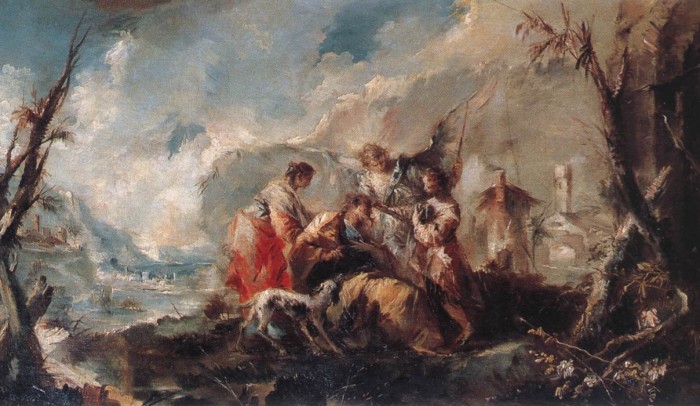 Tobias and the Angel (1753) by Gian Antonio Guardi (The Healing of Tobias’s Father) | Image wga.hu

Churches dedicated to Raphael are rare enough. Out of a select group of seven possible archangels mentioned in the apocryphal Book of Enoch, Michael, heaven’s generalissimo and weigher of souls, has the most churches, while Gabriel, the angel of the Annunciation, appears the most sweetly in art. For those who consider the Book of Tobit canonical, there is a third important archangel, Raphael.

In the story, Raphael appears disguised as a human traveling companion to Tobit’s young son Tobias, and tells Tobias to catch a fish. He used the fish’s gallbladder to heal Tobit’s blindness, then set the fish’s heart and liver on fire to drive away the demon Asmodeus, who kept murdering all of the bridegrooms of Sarah (Tobit’s future daughter-in-law) before they could consummate the marriage.

These fishy cures made Raphael a patron of medical staff and travelers, and a favourite in the voyaging, often disease-ridden city on the Lagoon. The original version of the church (one of only two free standing churches in Venice) may even date from the 5th century. It was rebuilt on numerous occasions, lastly in 1618.

Its greatest work of art, and the main reason for visiting, is, unusually, on the organ parapet, painted with a visionary, proto- impressionistic scenes of Tobias and the Angel (1753) by Gian Antonio Guardi, where material forms are dissolved into quick, free brushstrokes– much like the reflections of Venice itself in its myriad canals.

There are scores of other curiosities around Venice. Did you know that Venice’s San Pantalon gave English its word for ‘pants’? Find out how, and much, much more in our new Venice Art and Culture app for iOS or Android.

Dana Facaros and Michael Pauls lived in Umbria and wrote over 20 Cadogan guides to Italy. Their app "Venice" is the first app in the new series Art and Culture: intelligent, cultural app guides dedicated to Europe’s great cities.