I’ve often said that I think Roman art needs much greater explanation to make it come alive. Good renderings and videos would help many a visitor through ancient archaeological sites, when so much imagination is required to envisage what the buildings would have looked like. The Ara Pacis is already reconstructed and inside a museum that offers a videoguide, so it’s a bit easier to grasp than your average temple ruin. But a new Ara Pacis virtual reality experience, Ara Com’Era seeks to enhance the experience and understanding of the monument even further. Special evening openings and limited numbers make this a fun and educational night out in Rome. 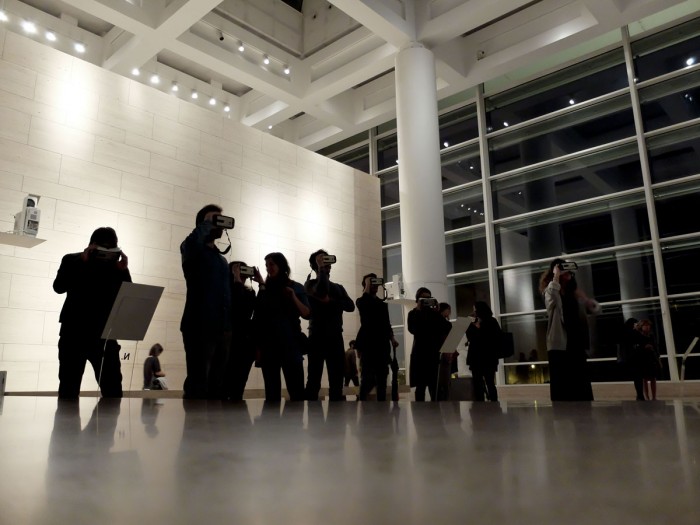 It’s a bit odd to watch people watching a building through these silly goggles.

The Augmented Realty (AR) experience works with the Samsung GearVR headset fitted with the Samsung S7 smartphones.  Looking through the visor, which is fitted with two lenses and has a focus reel, the user sees through the phone’s camera, which is able to recognize three dimensional elements, and thus overlays the digital content on top of it. The unit is held on to the face and has separate headphones, so it’s a bit encumbering as a set up. This was my first time looking through the GearVR and while it’s touted as the latest technology, I found the resolution rather too low to feel like “virtual reality”, and also moving around with the headset made me dizzy, though that could just be me!

Visitors look at a sign for each “POI” (punti di interesse), of which there are nine, to activate each story. It begins with 2 models showing Campo Marzio and the Ara Pacis, where we learn about the sacrificial rites performed at this altar. This is based both on literature and on sculptural evidence, that indicate that the sacrificed animals’s interiors were read and then offered up to the gods. 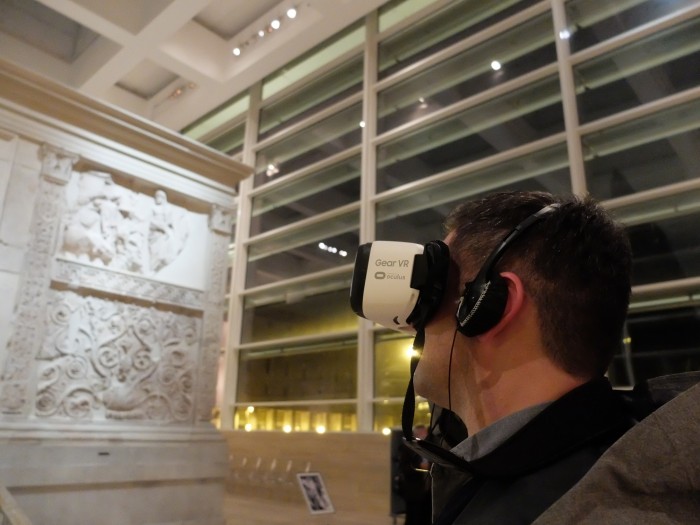 Looking at the ara pacis

Turning then to the sculptural work itself, there are six points where we watch the sculptures heightened by colour, a reconstruction that really does bring it to life. The animation in colour of the vegetal decorations is particularly beautiful. This is narrated in sections that are a few minutes each, just the right length to sit down and pay attention, not too long. 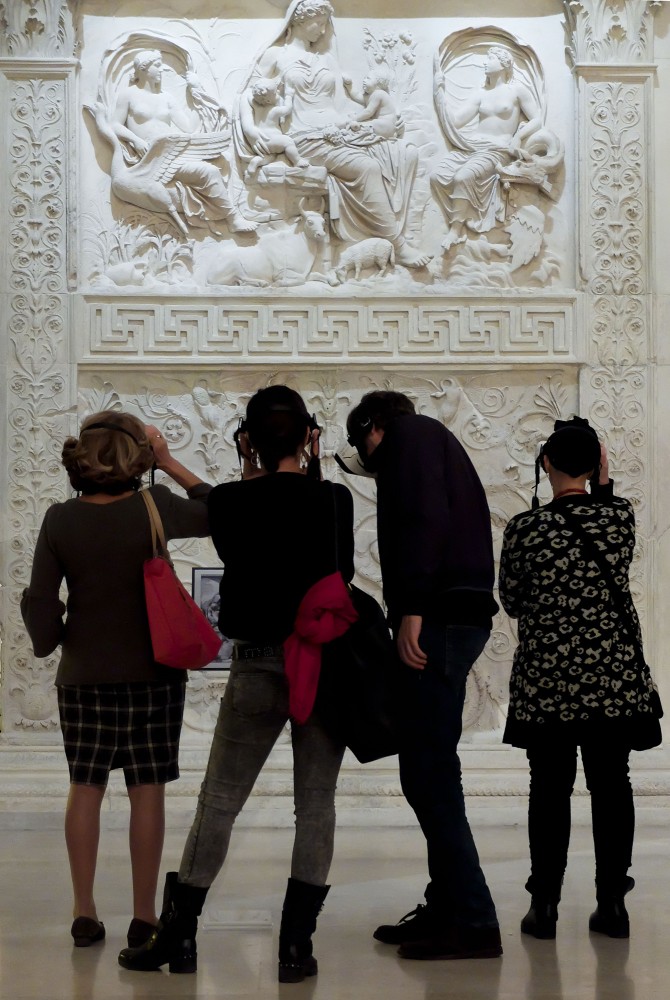 A small group observes a POI

The VR visits are planned on Fridays and Saturdays at night, from 8pm to midnight, with the visit lasting about 45 minutes. Entry is allowed to small groups (really very small, so you don’t risk hitting each other while looking through the visors), and the atmosphere is hushed and private. This in itself is a magical and exclusive experience that I recommend. It was my first time visiting the monument since its move to the new structure designed by Richard Meier and opened in 2006 and being there almost alone is totally worth the price of entry.

As for the actual VR, I found the content really useful, but think that the technology still has a while to catch up – I’d expect retina quality screens would make a big difference. Nonetheless, kudos are in order for the city museums of Rome to be the first in Rome (and as far as I know, the first in this part of Italy) to implement this technology in the museum.