At Sant’Andrea al Quirinale in Rome, Gianlorenzo Bernini created a jewel of the Baroque; a keyhole through which to peer into the mind of mid-seventeenth century Rome. Architectural historian Agnes Crawford contributes this learned guest post that connects Bernini’s Baroque architectural style to the Spiritual Exercises of Ignatius Loyola.

Over a century before Bernini’s creations, Martin Luther had begun the Protestant Reformation, highlighting significant cracks in the armour of the Church, and undermining Her temporal and spiritual power. The Roman Church responded with a counter-Reformation. Codified by the Council of Trent, it sought to re-establish the supremacy of the Roman Church, in part through emphasis on the veneration of the Virgin, the saints, their relics and miracles. Dominant among the figures who would carry forward this new impulse was Ignatius Loyola, whose Spiritual Exercises provided meditations and prayers designed to create a state of spiritual ecstasy, and embodied the changing mood.

By the early-seventeenth century, over half a century later, military victories, and wealth from the New World, brought new optimism to Rome. In celebration, a flurry of canonizations followed, including St Ignatius in 1622. The new religious atmosphere required a different aesthetic, and an theatrical style, charged with emotion, developed in distinct contrast to the didactic and austere art which had emerged from the Council of Trent. This new style was suited to the ever-increasing predilection for miracles, apparitions, and saints in ecstasy. The style came to be known as the ‘Baroque’, and its undoubted star was Bernini, himself a follower of the Spiritual Exercises.

In 1658, aged sixty, Bernini was commissioned to design a new church for the novices of the Society of Jesus, the order founded by Ignatius, on the Quirinal hill. It was to replace an unremarkable church on a small, awkward site. Bernini exploited this tricky location to maximum effect by employing a form that would have been anathema to the logical Platonism of the Renaissance a century and a half earlier; while Renaissance architects had favoured the geometric rigidity of circle and square, the ever-changing curvatures of the malleable oval made it the Baroque form par excellence. Moreover its versatility was ideal for concealing the awkward dimensions of the site, with axes which could be as long or short as necessary. At Sant’Andrea, Bernini took advantage of all of these aspects and created an oval plan, unusually placing the entrance and high altar on the short axis.

Let’s take a look at the facade, which breaks all the logical rules of Classicism. Walking along via del Quirinale, one is initially drawn into the entrance space by the curve of an exedra. The narrow entrance is more monumental gateway than church entrance. However, its apparent classicism (the archway over the doorway is framed by pilasters and topped with a pediment) belies a number of idiosyncratic and profoundly a-classical features. The area of the archway seems to have swung down and forward, as if on a hinge, to create the protruding portico supported by two columns. The bases of these columns are rotated forty-five degrees to the façade, their corners pointing out toward the visitor: the deliberate application of a solecism which would have Vitruvius spinning in his grave. This ‘pronaos’ is topped with a curved and heavily broken pediment, in louche imitation of the sober pediment above which looks on, unamused. The scrolls of the broken pediment, entirely stripped of any pretence of structural function, frame the crest of the church’s patron, Prince Camillo Pamphilj. If we look down, the semi-circular floor of the portico spills into a flight of concentric steps which seep out, occupying the entrance exedra. 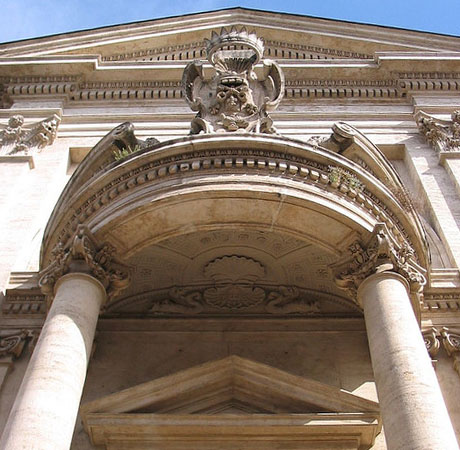 If we raise our eyes above the quadrant walls of this exedra, the sides of the church can be seen curving back, topped with the scrolls of the buttresses. The rigid verticality of the façade is the point of union between these opposing curves but, as demonstrated by the curved portico and stairs, simply cannot contain them; they even force themselves through the façade governed by the sober giant order of pilasters.

Upon entering, the visitor is immediately presented with the high altar. The unusual positioning of the oval means that the distance between the entrance and the altar is the shortest in the church; a very direct confrontation. After this initial impression, our eyes move around the space, but the darkness of the recessed side chapels, and the solid piers which close the long axis, send our gaze back to the altar. 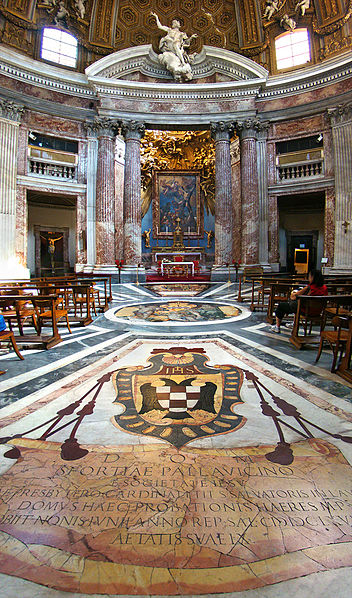 Reinforcing the focus on the high altar, the entablature which runs right around the interior breaks forward slightly to create a chapel articulated by columns of richly veined red marble which stand out from the two-dimensional pilasters which demarcate the other chapels. Within, the small altar chapel receives light from an invisible source, a device already employed by Bernini at the Cornaro chapel just down the road at the church of Santa Maria della Vittoria.

Guillaume Courtois’ rich painting of the Martyrdom of Saint Andrew appears to be placed on the altar by a host of angels who descend on beams of light of gilded wood and stucco. An apparition is created. As our eyes are drawn to the pediment over the chapel entrance, it is as if this vision cannot be contained by the architectural delineation of the space. The marble figure of Saint Andrew on a cloud appears to have floated up from the altarpiece through the pediment, which curves obligingly to allow him to pass and continue to the heavens, represented by the richly decorated elliptical dome, divided by gilded ribs and decorated with ever-decreasing hexagonal coffers, which seem to be sucked heavenwards through the lantern stuccoed with the dove of the Holy Spirit, which bubbles over with cherubim. Thus the crucifixion in Courtois’ altarpiece is merely a prelude to the truly important fact of the ascension into heaven, and the earthly rules of architecture are irrelevant in the face of divinity. The dynamism of the ascension is emphasised by the darkness of the lower part of the church, while the heavenly dome glows with gilt and white stucco. Radiantly illuminated by windows above the cornice and the lantern, it is the focus of St Andrew’s gaze.

Both inside and out, it is as if the rationality of the classical language of architecture must develop to express that which cannot be expressed rationally; an artistic expression of the religious experiences the followers of the Spiritual Exercises, including Bernini himself, sought to cultivate.

Agnes Crawford is an architectural historian and a licensed tour guide in Rome with her own business, understandingrome.com. Her itinerary “Bernini, Borromini, and the spirit of the Baroque” offers visitors an in-depth exploration and discussion of Sant’Andrea, the Cornaro Chapel, and other sites crucial to the period. On twitter she is @understandrome.