Borgo Pignano, The Art of Relaxation

I have had the good fortune, these past few years, of experiencing some absolutely amazing hotels and resorts in Italy. As I write them up on the blog, I think about how each one stands out for a certain element, be it level of luxury, a central location, deep history, funky décor, even the personality of its owner. This Fall, I spent a weekend at Borgo Pignano, a boutique luxury resort about halfway between Volterra and San Gimignano, just before it closed for its annual wintertime break. I’ve had some time to think about how to “peg” Pignano, and to be honest, it’s hard to put a finger on what makes this place so particularly relaxing and special. Don’t get me wrong: I’m not saying it isn’t. It’s just that the formula is so discreet, you don’t quite realize how it’s constructed. If I had to rebuild it in adjectives it would be: casually luxurious, natural, downplayed, heartfelt, whole, comforting, artistic, stimulating, relaxing. 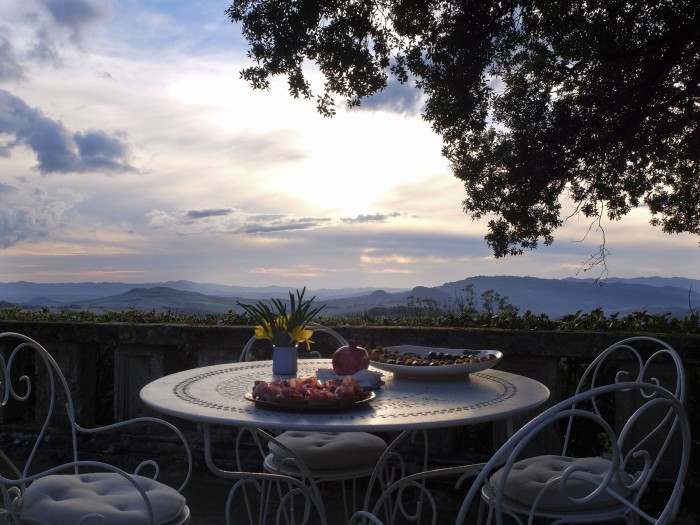 Sunset aperitivo in the garden overlooking the hills of Volterra

A weekend at Borgo Pignano is like being invited to a wealthy 19th-century lord’s house, a distant family acquaintance who can’t make it as he’s currently on a boat to India but who just insists you stop by his place while you’re in the area, and you can’t say no. He is omnipresent, with the books he’s authored on the bedside table and his choice of art on the walls, yet he has left his staff at your disposal. The lord in question is Sir Michael Moritz, who is far from being a low-tech representative of the previous century and is more likely to be jetsetting his way between board meetings for companies like Google, Yahoo and Paypal. 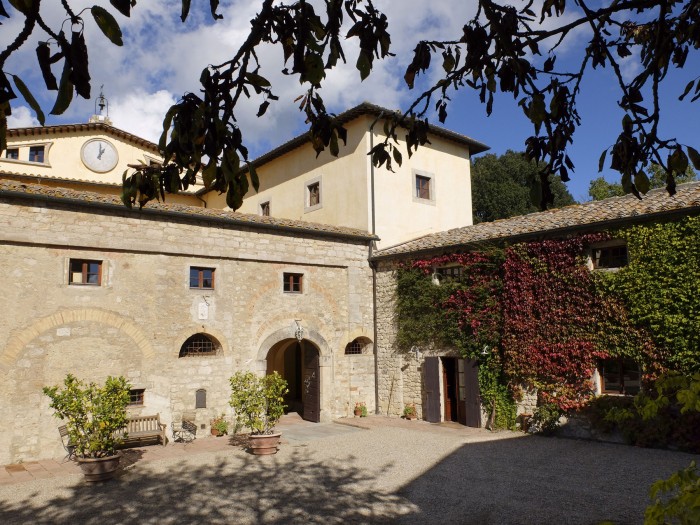 The book in question is his history of Apple Computer, which he wrote when he was a journalist for TIME Magazine and before becaming one of the world’s most important venture capitalists. One gets the sense that Moritz would rather be here at his country place in Tuscany that he bought 12 years ago, where technology is downplayed and the only “stock” is broth bubbling in the gourmet kitchen from vegetables grown on location. This is the luxury of self-sufficiency, the ability to return to the land, to isolate ones self within – and surround ones self with – beauty. No expense has been spared to make himself, and his guests, at home. 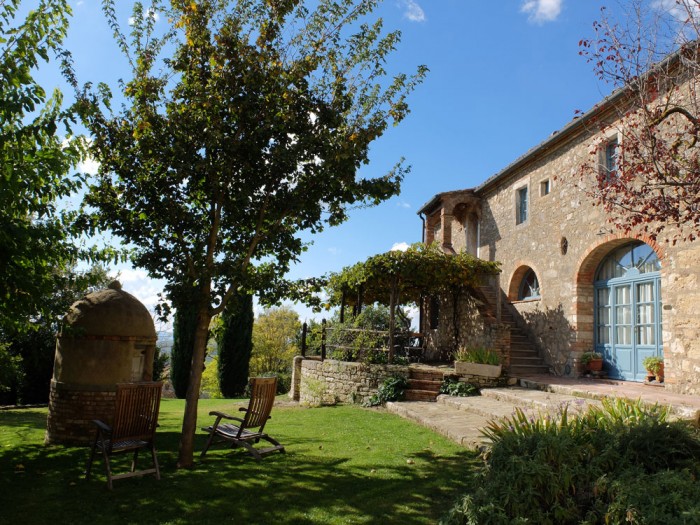 A country house on the property

Arriving at Borgo Pignano, you find yourself in a hamlet that has Etruscan origins, a Medieval church and priory, and an 18th-century villa done in a sort-of Neo-Gothic style. No signs point you to the reception (nor anything else, like bathrooms or the restaurant), and in fact if they could have done away with a reception desk and any form of payment, they probably would have. The rooms (of which there are 16 in the villa, plus other accommodation around the property) are welcoming, stocked with books old and new, scented with fresh lavendar, but not too large, and without distractions like television, clocks and things with annoying buzzing and lights. (Most excellent wifi and modern lighting are hidden in the hotel’s bones – things that need to work perfectly but you shouldn’t have to notice them.) My bathroom had a huge bathtub to fill with regenerating salts and herbs. But the idea is not to spend all day in the room, as there are plenty of other spaces, both inside and out, to be discovered. 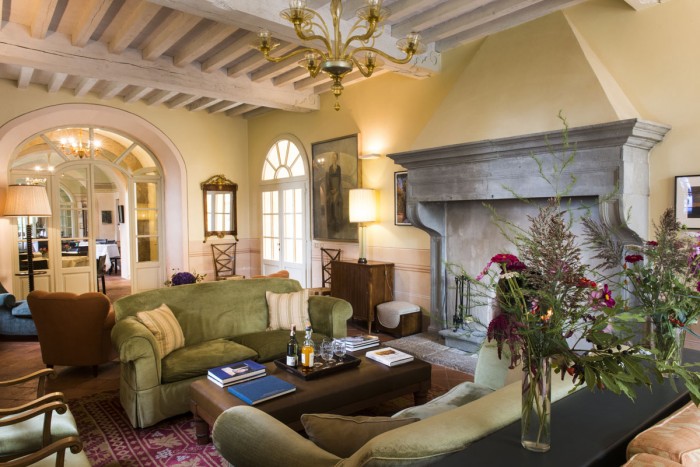 On rainy days, as one might encounter in the off-season, nothing could be more wonderful than to sit by a huge fireplace and sip herbal tea, which one can do in the cozy living room/bar on the ground floor, where people tend to congregate after dinner. Go off exploring in the villa and you’ll find plenty of other treats though. A huge library welcomes readers and those who tend to fall asleep on couches (like my husband), a billiard room attracts manly men, and a ballroom-turned-art studio offers free equipment to paint whatever you want, in whatever medium. Had I had more time I’d have given it a shot, but alas, I had a few activities planned. 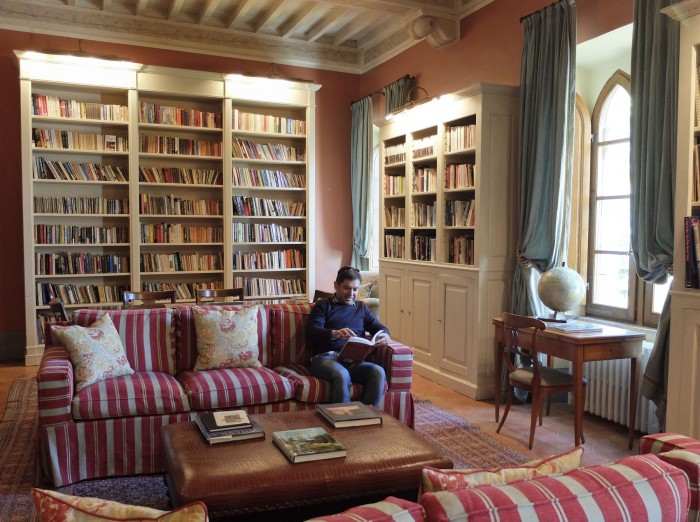 Tommaso in the library

Art is unquestionably a major theme here. Moritz and his wife are major supporters of the arts, and items from their collection of 20th-century British art can be found around the property. There are also a lot of smaller works and studies, which are the “payment” left by students of the Royal Drawing School in London who are given a week-long opportunity to study, as a group, here in Tuscany. The study trip is completely free, but they must leave behind their one best work – potentially a good investment, should anyone become famous! 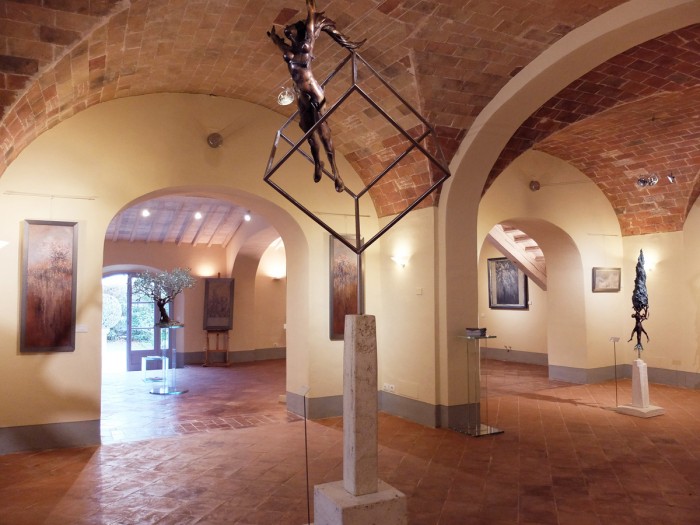 This past Summer, Borgo Pignano opened an on-site, full-fledged art gallery (see more about it here) and I had the pleasure of speaking with Olga Niescier, the painter whose works are featured in the inaugural show alongside those of sculptor Andrea Roggi. Although Olga only recently started painting full time, in an exhibit Andrea curated in Cortona, he place their works together and realized that they were so complementary, they’ve been setting up together in galleries around Tuscany ever since! 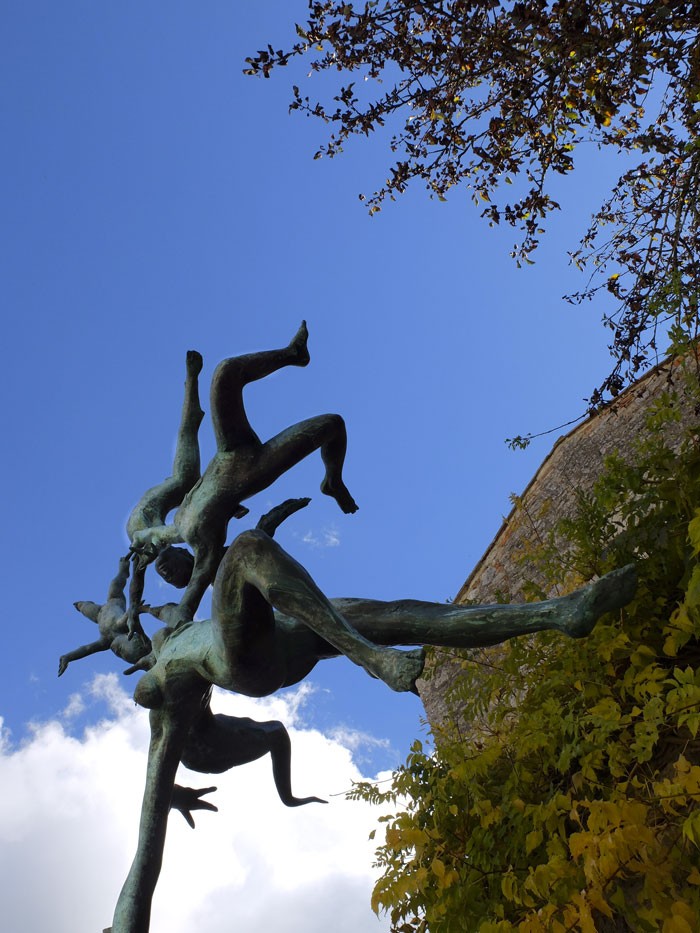 Sculpture by Andrea outside the church

Olga, who owns a gallery in San Gimignano, is also the curator of the Pignano gallery and has been actively involved in its creation from the start. One of the reasons for it, she explained, was the need for a proper place for an end-of-workshop show for the Royal Drawing School scholarship students, but the intention is to create a schedule of exhibitions throughout the year, spotlighting works by contemporary Tuscans or from beyond. Pignano also supports artisans, hiring local talents to execute careful renovations; in the just-finished prior’s apartments, which have a miniature, jewel-like feel, walls have been painstakingly painted as a work of art in their own right. 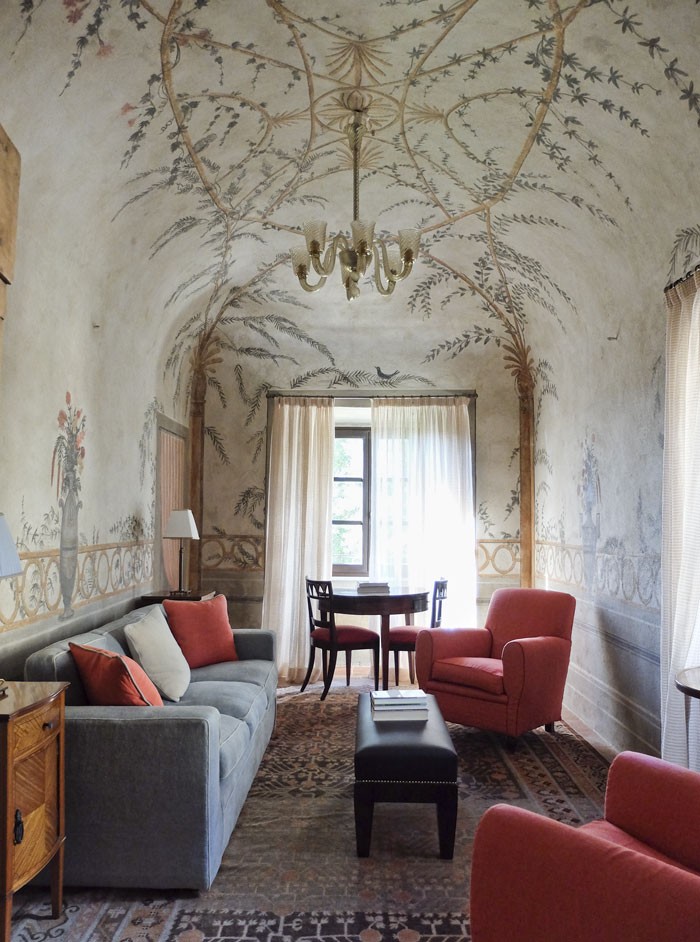 The adorable living room in the priory apartments

Alongside this food for the soul and mind, there’s also plenty for the body here, starting with the hotel’s gourmet restaurant, which depends as much as possible on products grown on location. Lunch is served, during good weather, in the garden with a view of the hills of Volterra. Dinner, a bit more elaborate, is set in a quiet restaurant with generously spaced tables and soft music. 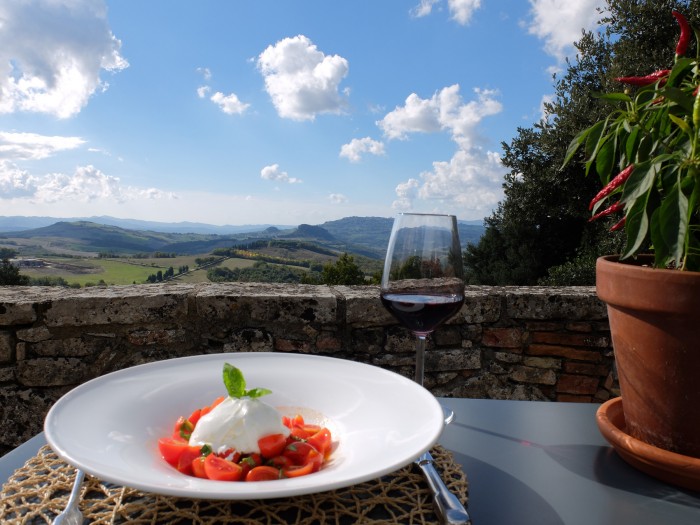 A simple lunch with a view

Being an organic agriturismo, Borgo Pignano is required to source local products as much as possible, so whatever isn’t grown here is chosen from the best of what can be found nearby. The same applies to wine, where the sommelier has selected organic wines of Tuscany to pair with menu items, which has plenty of vegetarian options alongside the usual Tuscan meats. 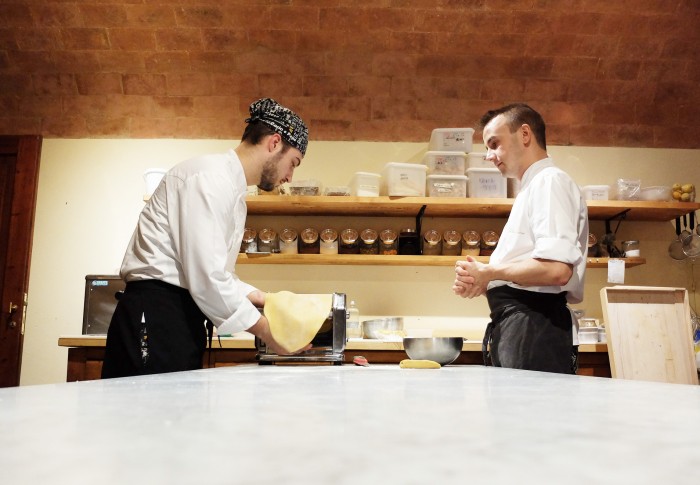 Part of Pignano’s food culture can be experienced with a cooking class to learn either pasta or bread making. I was blown away to learn that they grow their own grain and mill flour on the property. The resort’s crop is part of a recent trend in Italy towards rediscovering ancient grains that haven’t been genetically modified to be more productive (and to have higher gluten levels). The best known of these is a grain called Senatore Cappelli, which was introduced in the early 20th century, much used but then forgotten until recently. We worked with this unbleached flour to make some very delicious pasta in different shapes, filled and non. 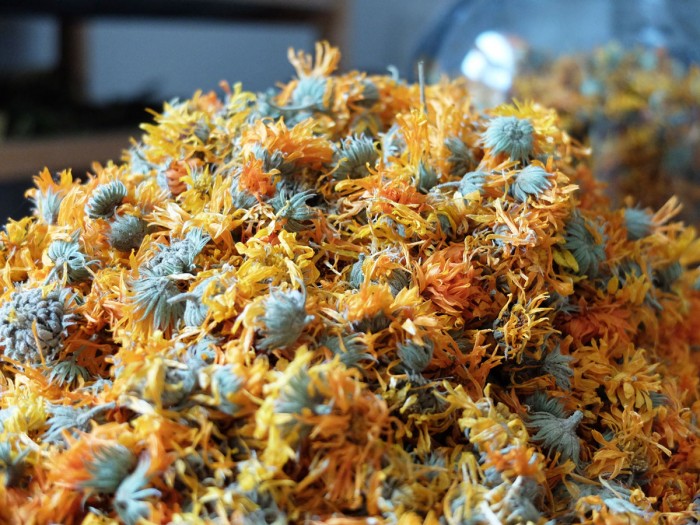 Another unique element that I’d never seen before in a luxury resort is the on-site herbalist, who is tasked with growing, picking and drying large quantities of herbs and flowers to be used for teas, bath products and scents. The bath products in the rooms, presented in hand-painted ceramic containers, are thus made from these herbs. 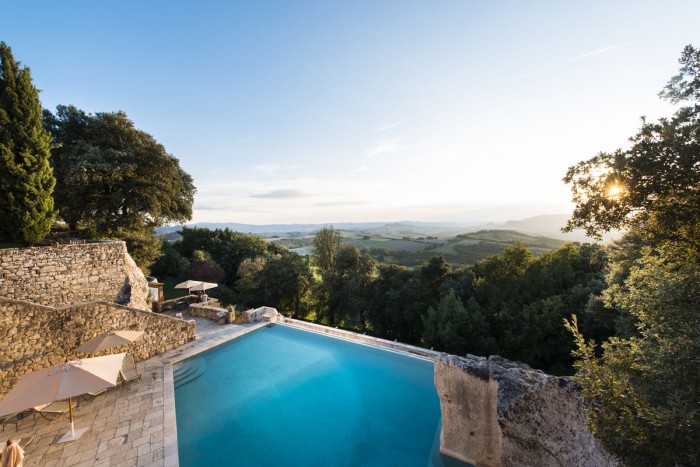 Borgo Pignano’s swimming pool carved out of a quarry

These are just some of the things I liked best about Borgo Pignano, but what’s great is that there are elements and activities that will appeal more to people with different interests or during different seasons. There’s a gorgeous swimming pool carved out of an old quarry, an al-fresco pizzeria in the garden, stables with horses to ride, a yoga area, daily afternoon drinks in the garden, and dedicated childrens’ areas and activities. 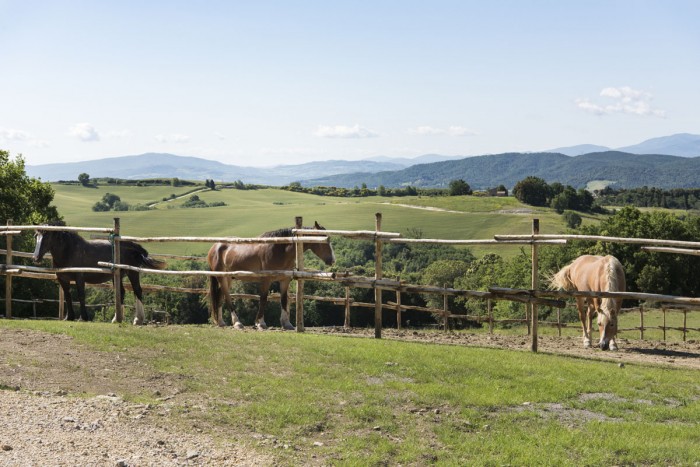 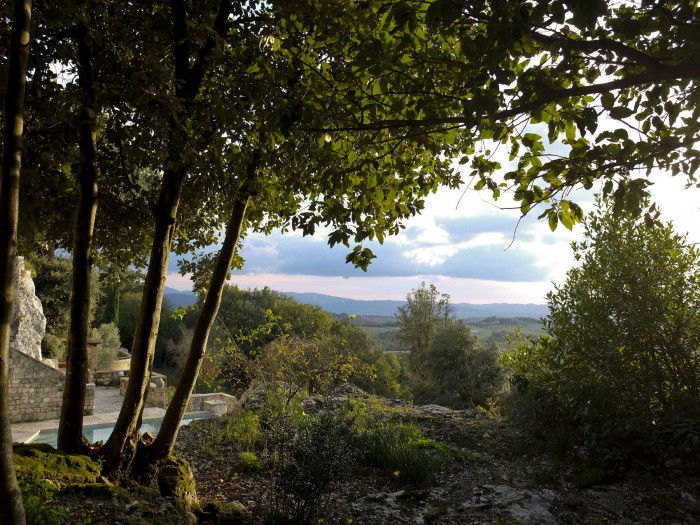 A view of the pool coming out of the adjacent woods, where you can hike

Borgo Pignano is open from mid-March to the end of October each year.
www.borgopignano.com

Disclaimer: I was hosted for a weekend experience at Borgo Pignano, but all opinions are my own