The Roman aristocrats, and the Renaissance lords after them, believed in the nurturing – as well as entertaining – value of creating a space in which to forget work (ufficium) and cultivate otium, a time of leisure. They created pleasure villas with saunas, hot baths, spaces for games; they cultivated medicinal herbs and unusual animals, and laid long tables with food, wine and olive oil; and then they invited an assortment of interesting guests in order to generate edifying conversation. 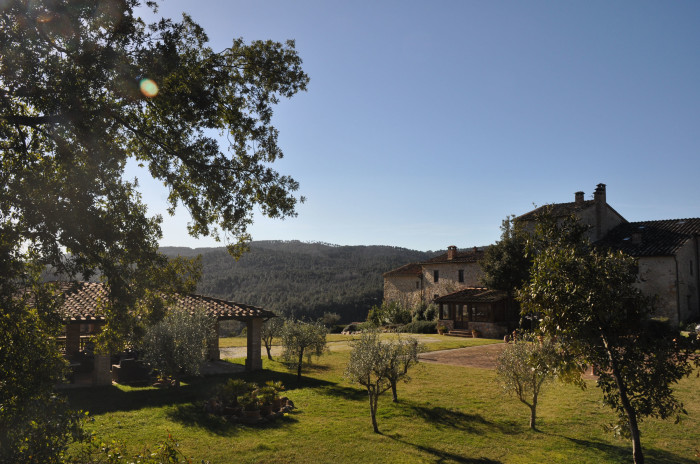 Vittorio Cambria is one such lord. He’s a modern Renaissance man who is recreating the concept of the Roman villa for otium in the Tuscan countryside, about half an hour south of Siena. Villa Ferraia is an extensive property in the middle of the woods, accessed by a bumpy road. A large villa with fourteen guest rooms is the center of this project, accompanied by a series of purpose-specific structures and outbuildings where some staff and family reside. No signs guide you around the property: “Can you imagine a sign here that says ‘relax area’? It would be ridiculous,” Vittorio explains as he takes us on a lengthy tour of the structure, punctuated by numerous seated, philosophical conversations. He seems to have an endless number of spaces that are his toys, his passions – from an astronomical observatory in the woods to a collection of saddles to a herbalists’ hut. It’s a huge project that he runs with his wife Patrizia and their son and daughter, with a bare minimum of staff. 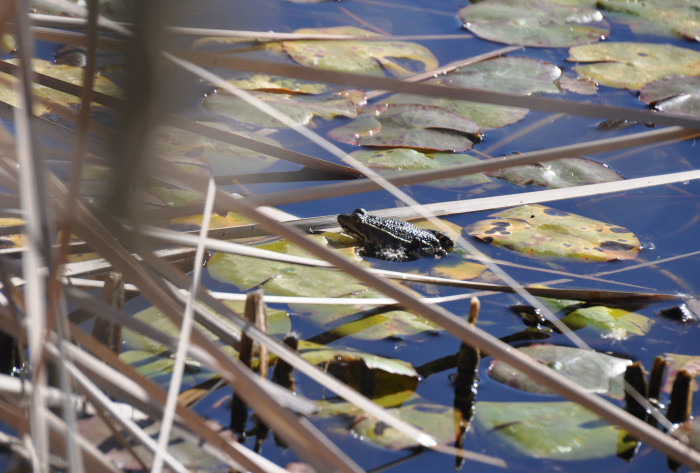 We were at Villa Ferraia to experience “wintering.” It’s not news that winter can be the best time to be in Tuscany, as long as it’s not raining and you have a good duvet and heating! We were blessed with an exceptionally warm and sunny February weekend. So I turned off my cell phone, ignored email and Facebook, and allowed myself to be immersed in this very special place. 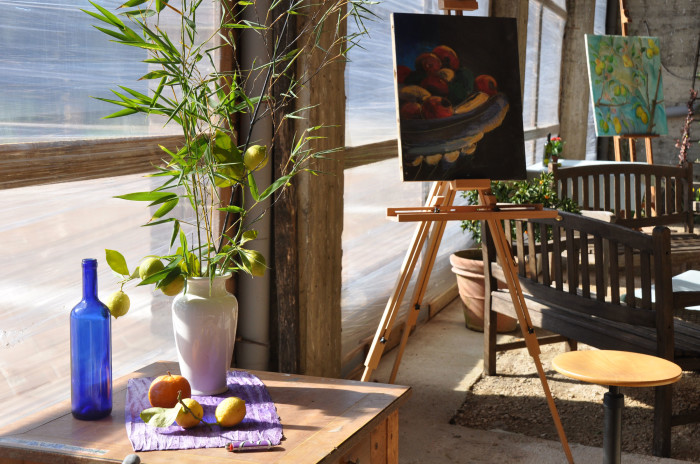 Like any good lord, Vittorio is a patron of the arts. He has brought over Cape Cod based artist Sarah Holl for the winter, and she is accompanied by her husband Jeff who lends a hand on the grounds. Sarah is a multimedia artist. She’s worked a lot in painted clay relief sculpture but she’ll paint on and with anything she can get her hands on. Sarah and Jeff have just spent the last six weeks setting up the studio from an unfinished space below a terrace near the main building and they’ve decorated it with lemon trees, daffodils in pots, random garden chairs and lots of easels and supplies. It’s a huge space with lots of natural light and no artificial light, forcing you to make art when nature intended you to – during the day. 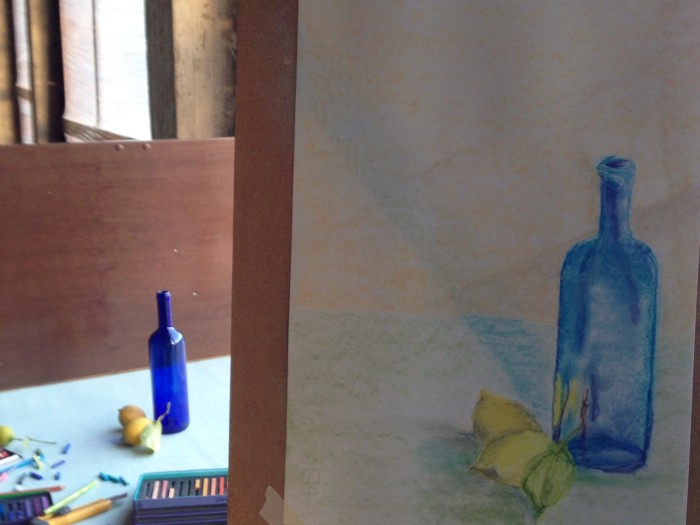 After the disastrous results of my recent fresco painting attempt, I was hesitant to approach the large sheet of paper Sarah gave me. The only successful paintings I’ve done in the past have been practically miniatures. But we were inspired by a blue bottle and some lemons, and the light streaming in, and she encouraged me to work in conte crayons on this big paper. Sarah, it turns out, is an excellent teacher. While I’m hard on myself and easily frustrated, Sarah kept telling me not to put myself down. Somehow, I produced a drawing that looks something like what I saw. There’s even shadows in there. 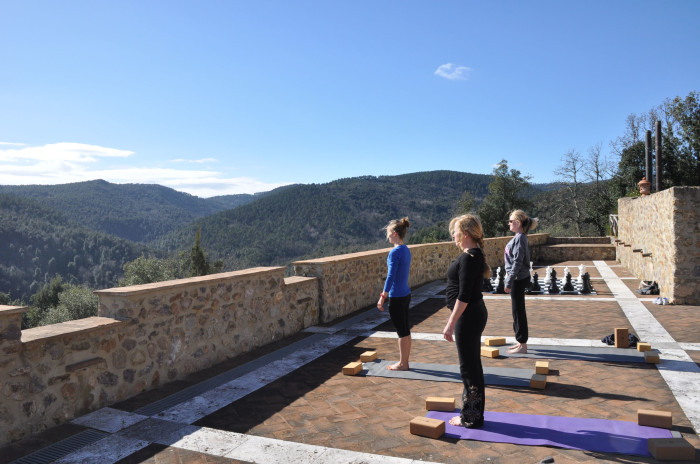 My successful art-making session actually followed a high noon outside yoga session, which had probably put me into a sufficiently relaxed frame of mind. Physical exercise is also part of the Roman Villa lifestyle; Vittorio is a fan of yoga (although he does not seem to do it) and also of the honey massage, which unfortunately was not available this weekend but sounds, uh, delicious. Amy just arrived from the States a few days ago and is trying to learn Italian while improving her yoga daily. She primarily practises Bikram (also known as hot yoga), but thankfully we just did Ashtanga sequences here. We set up outside with a view of the mountains, the sky bluer than blue, the wind in our hair. It didn’t matter that I haven’t practised in years or that we were three people at totally different levels. Amy is as encouraging as Sarah, a true believer in approaching each day as it comes. Being surrounded by all these nice, open and encouraging people was starting to rub off on me, so I cracked fewer jokes than normal as we chattaranga-ed our way through interminable asanas. As I swung up into warrior two and looked over my left hand at the mountains, I could not help but think “oh, this is so beautiful. I wish I could photograph this.” 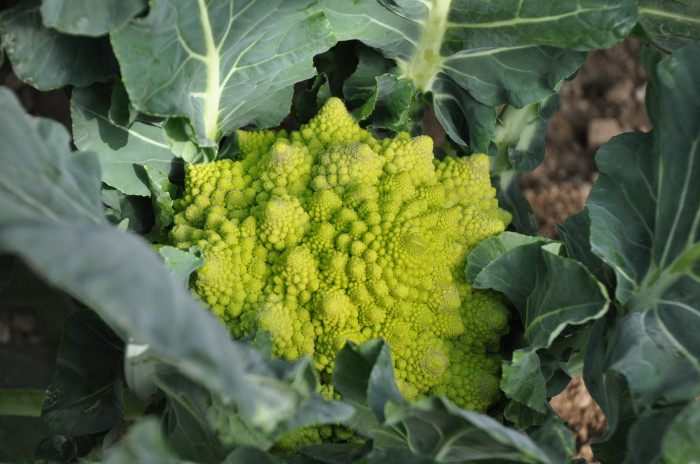 Meals at Villa Ferraia are taken at a long table, wherever you are. There is a very long table in the living room, which we used, but you’ll find a few more around the property in sheltered gazebos. One such table is found right near the vegetable garden, where we saw Jeff cleaning away space for cabbages to grow, adjacent to a pig-slaughter hut and outside cooking area. 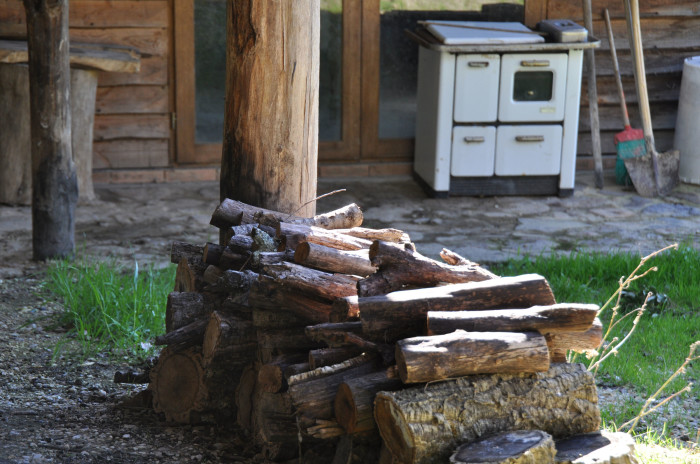 Here, the idea is that food travels barely 10 meters to the table. Ideal for summer, but it’s February. Still, at table up at the villa just 200 meters or so away, we get cauliflower, cavolo nero, salad and other treats from the winter garden. Thankfully this was also subsidized with a few seasonal but harder to grow items, so we ate light but satisfying home cooked meals. 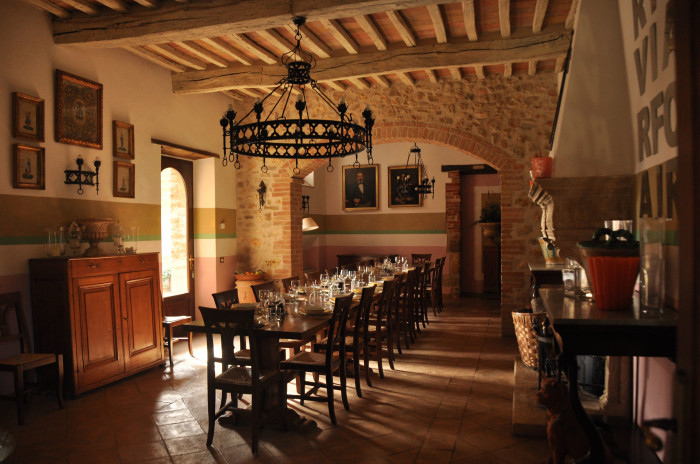 Philippe Daverio, the Italian tv personality and art critic whom I had the pleasure of interviewing, had a TV program for a few years called “Notturni della Maremma” in which he invited a few friends over for dinner in his villa in Southern Maremma. Ostensibly the conversation was to be about a theme, but like anything by this great thinker, discussion could bridge some highly disparate topics. Villa Ferraia’s dinners, on the border of Maremma, are something like this. If Vittorio didn’t also run a business, he’d probably invite artists, astronomers, critics, engineers and any variety of smart people to share dinner with him every day. As chance has it, our experience was not far off. Sunday lunch involved conversing amongst: two bloggers, a priest, an artist, a yogi, an ex jail guard, an engineer, a medical technician, a consul’s wife, two lovely newlyweds and a retired art history student. We all became fast friends. Those who understand and enjoy this place could not be otherwise. 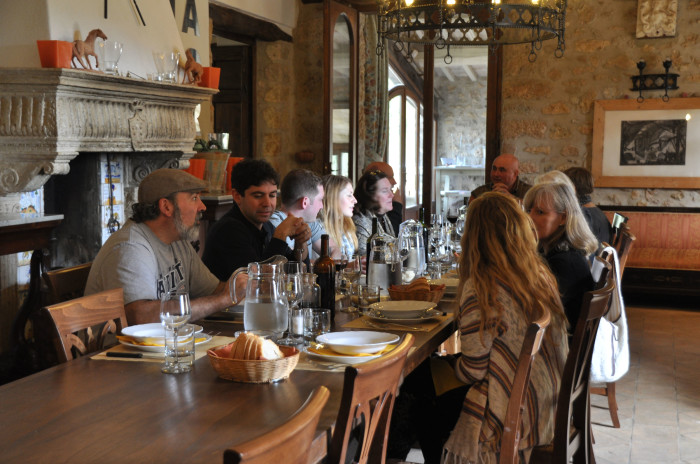 From October through March, Villa Ferraia offers “all inclusive packages” – a week is recommended but shorter stays are possible. This is a far cry from what you’d normally associate with the words “all inclusive” (swim up bar, buffet dinners). Some of the things you can do here are: discuss the craters of the moon with the on-call astronomer, Emiliano; learn to cook either formally with Stefano or by observing Patrizia; do yoga with the resident teacher, Amy; paint or draw at any time with the in-house artist, Sarah; brew strange herbs with Vittorio; be led through streams and to abandoned churches on horseback; use the sauna and then jump into a freezing cold pool, and much more. I am currently plotting my return. 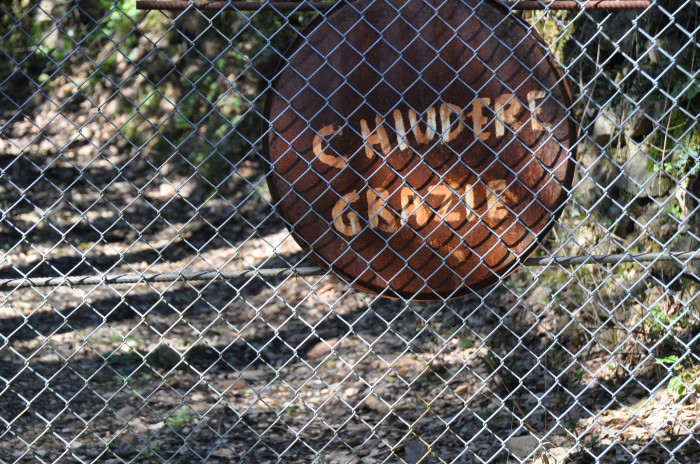 Disclaimer: I was an invited guest at Villa Ferraia, but all opinions reflect my own, honest experience of the place.