There are some hotels that leave you speechless for the level of luxury (like this one), others that dazzle with modernity and discretion (like this one); and then there are hotels where the protagonist is the food. Castello di Spaltenna holds its own for its refined monastic setting, impeccable service and open views, but it’s really about the food, in particular the cooking of Executive Chef Vincenzo Guarino at Il Pievano restaurant. 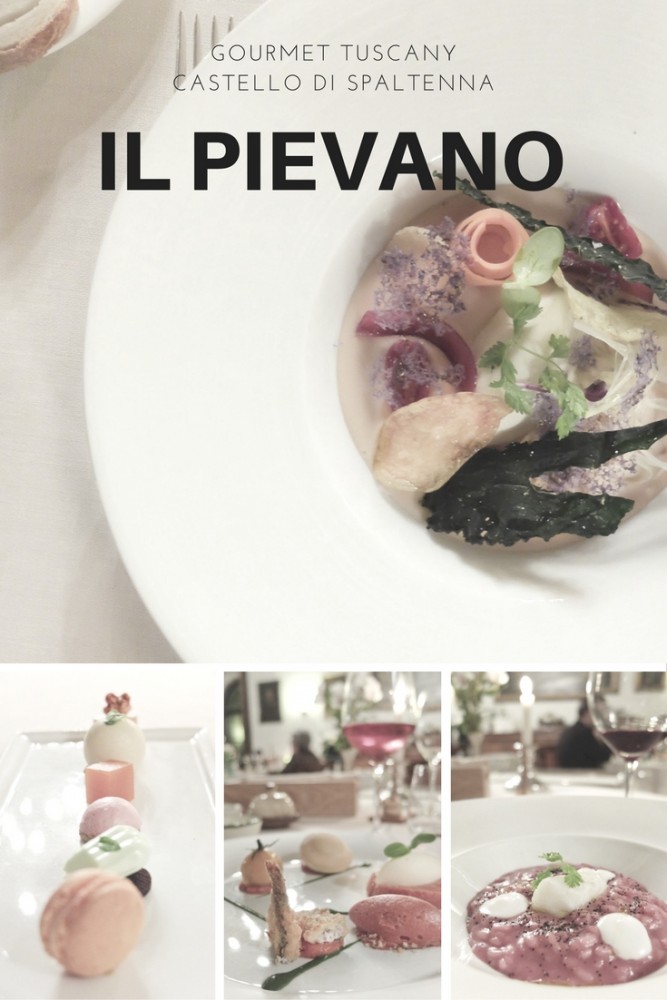 A large and very formal, high-ceilinged dining room is the setting for Ristorante Il Pievano, from January 2016 the realm of Chef Vincenzo Guarino, who moved his way up in the kitchens of Chef Gualtiero Marchesi in Capri, Peter Wiss in Gstaad and Nazzareno Menghini in Rome; he received his first Michelin star at “I Salotti”, in Tuscany at the Hotel Il Patriarca in Chiusi (SI), confirmed in 2012 at Vico Equense at “L’Accanto” at Grand Hotel Angiolieri. He hopes to confirm it here at Spaltenna, just above the town of Gaiole in Chianti, a goal that seems entirely reasonable. 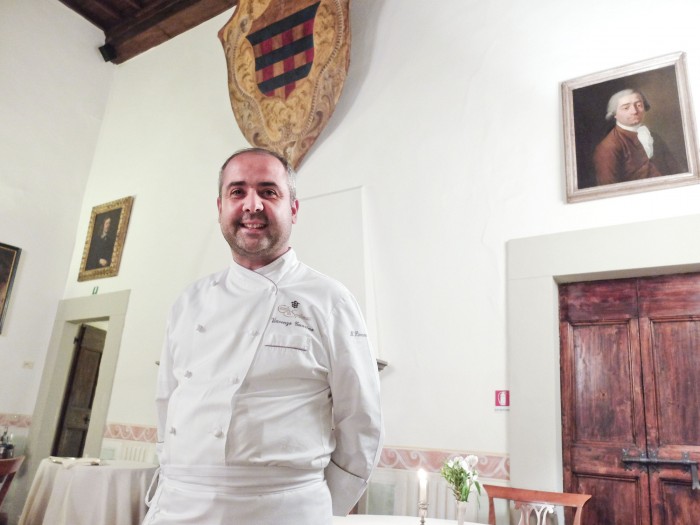 The extremely classic setting, menu font and hotel itself hardly prepare the visitor for the creativity of this chef from Campania, who has absorbed something of Tuscany and brought something of his homeland with him, and has made them encounter with much refinement. Perhaps because he’s just settling in, or because he likes challenges, it’s October and he’s already changed the menu four times since he arrived in January. Seasonal and local foods are an obvious refrain in the chorus that is this restaurant, and the other much repeated phrase is “Toscana rivisitata” – revisited Tuscan food. Both are elements that you really cannot get away from if you’re doing gourmet in Tuscany. The trick is doing it with a new twist.

Dining here is an experience, which is why it’s best to go with the tasting menu, of which there are two options. The first is more Tuscan oriented, with slightly fewer courses and a 3-glass wine flight. The second dips into more of the chef’s specialties, with more dishes and 4 glasses of paired wine (€110pp). We had the latter, which had more courses than I could count, as there were also pre-aperitivi and a pre-dessert and also a post-dessert! Portions are more than you’d expect of a tasting menu – you certainly won’t go away hungry, and in my case perhaps I ought to have paced myself a bit better for I had trouble finishing!

Before heading into the food, a note on the wine. Castello di Spaltenna has a small vineyard out back, that goes into their IGT Toscana house wine, but they use an external producer (Villa Vignamaggio, Greve in Chianti) to make a full line of branded Chianti Classico: a simple rosato, a tannic and somewhat predictable Chianti Classico, a rotund and spicy Riserva and a pleasant Vinsanto. These pair nicely with the menu, and there’s no question that the wine enhances the experience. If you’re a larger group or feeling adventurous, dip into the wine “book” – what cannot be called a wine list as it weighs like a Latin dictionary. The wine cellar here has 800 to 900 labels, and restaurant staff is fully qualified to illustrate your choice or suggest options. 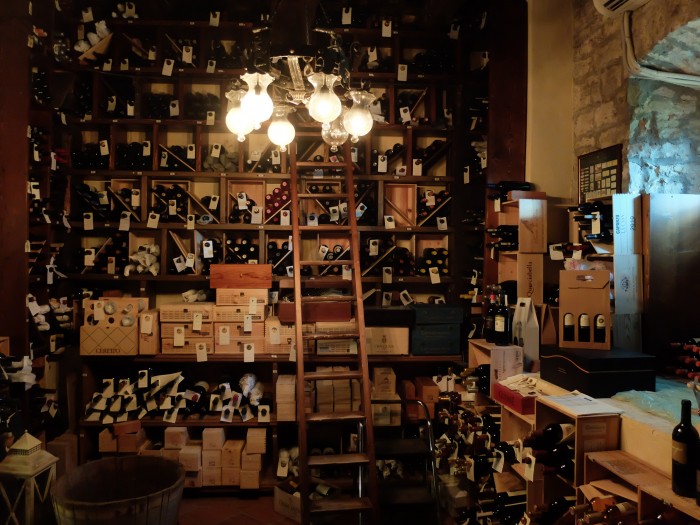 Our meal began with some mini tasters on a specially crafted board, offered to all diners and giving a sample of the chef’s creativity and straddling of regions. Two little cones containing an orange cream are nested in a box of popcorn, a surprising and delicious combination. An arancina, the Sicilian specialty, is flavoured with Tuscan pecorino al tartufo. A little piece of sea bass on a sauce, a light goats cheese, a pistacchio “cantuccio” and a little fried pizza for a touch of Naples. On the table, an assortment of home-made breads, fresh goats’ butter, and tangy Chianti Classico DOCG extra virgin olive oil produced for Castello di Spaltenna by Dievole, one of the top EVOO producers in the area. This is followed by the pre-appetizer, which was one of the most exquisite pieces of marinated salmon I’ve ever tasted, on a cream of chick peas that were sweet and creamy, a perfect complement to the buttery salmon. 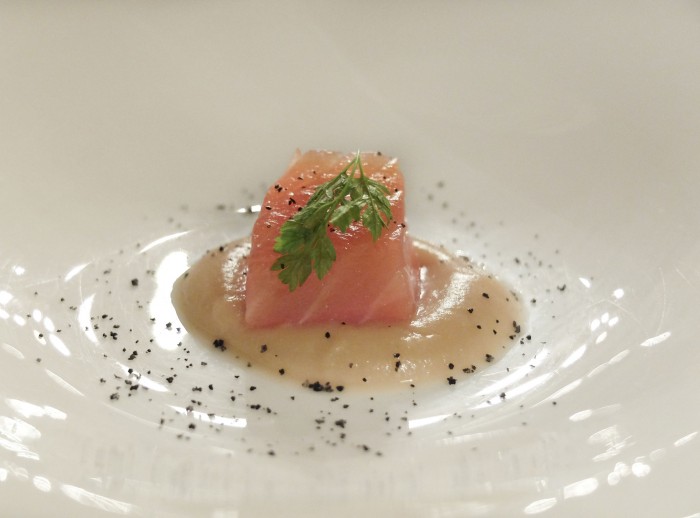 A “pappa al pomodoro a modo mio” is the chef’s reinterpretation of the classic Tuscan bread salad, which he’s smoothed down into almost a cream, and presented in five declinations, including a orange-tomato-only version inserted into a sphere of gelatin simulating a baby tomato. A game of texture, colour and shape. 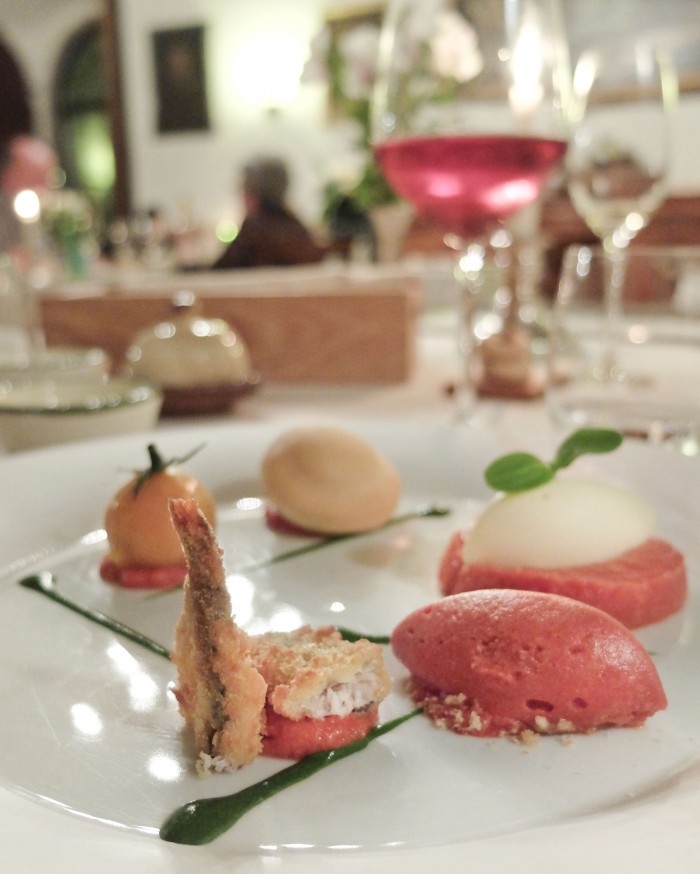 Another very Tuscan winter soup dish, the ribollita, is served totally deconstructed. The beans that are an essential element of this cucina povera dish are puréed and served as a base, while all the vegetables are prepared in different ways – dehydrated, toasted, fried, etc – and artfully placed on top. 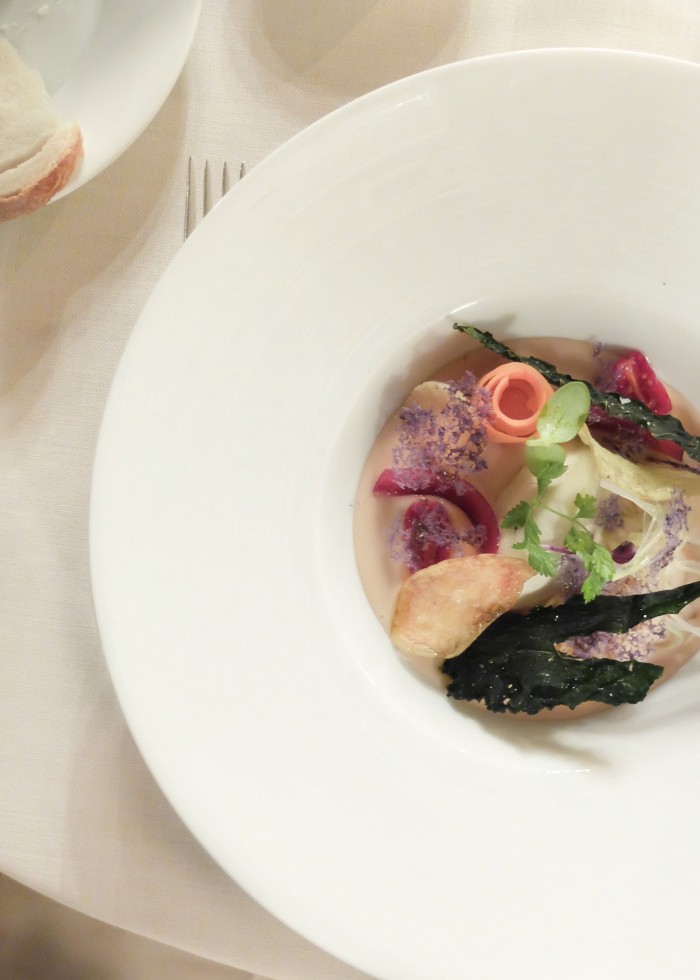 This was followed by a mainstay of the chef’s menu, a risotto of beetroot with baccalà confit and its mayonnaise, which pairs well with the Chianti Classico annata or riserva. 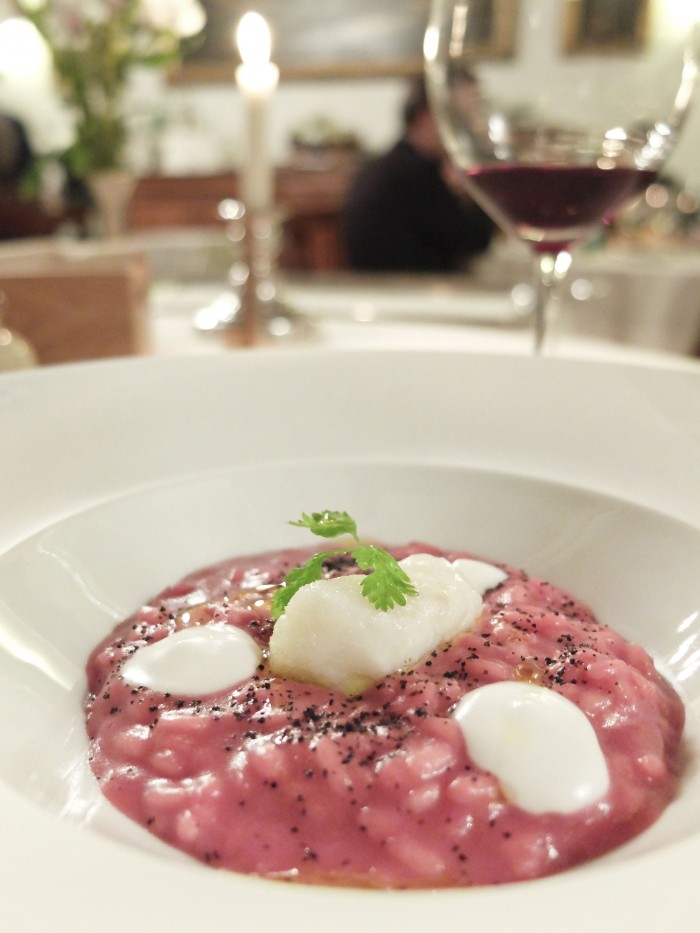 We came to a main course at this point, a rather generous portion of truly delicious wild spigola (sea bass) served on a bed of fagioli all’uccelletto, a special bean from the neighbouring Valdarno area, accented by parsley “sponges”. 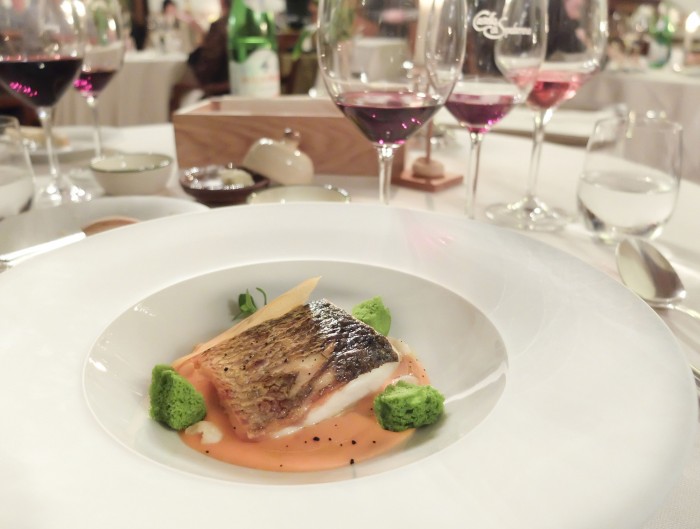 Our water glasses promptly changed after the fish, we were served a palatte-cleaning and most delicious pre-dessert created by the dedicated pastry chef, of Argentine origin but from the Friuli region of Italy. A soft pistacchio shell with a mousse flavoured with mint and pineapple, and a passion fruit center. I was in heaven. I could have stopped here. 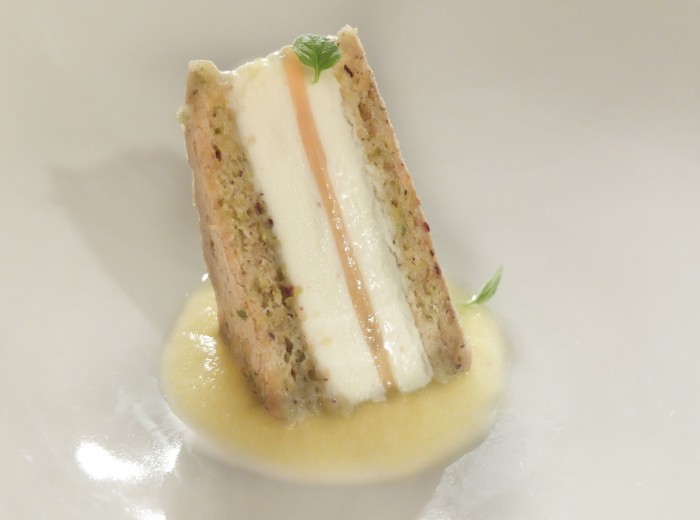 I do love desserts, and we were further delighted with two of them (a chocolate homage to Daniele Vestri and a chestnut meringue composition), plus an additional sampler plate of tiny bonbon-like sweets that played with colour, flavour and texture. We were also treated to a Vinsanto by Rocca di Montegrossi, aged 9 years, a thick and velvety meditation wine that sings of raisins and caramel and that you could easily sip for the rest of your days and just think about its complex flavours. 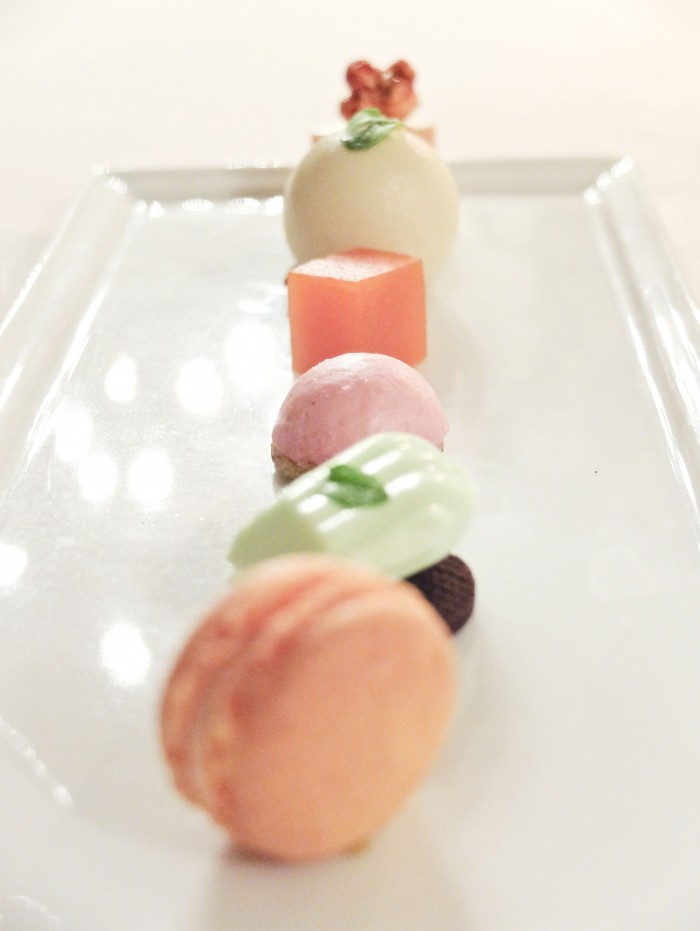 It is advisable to sleep at Castello di Spaltenna, even if the restaurant is only an hour away from Florence – the road is curvy, and the wine is good. Having died and gone to heaven, we slept it off, and woke up to blatantly joyous sunshine illuminating still-wet vines and lawn from the day before’s storms. Breakfast – having little need of it – was served on a porch at the back of the hotel, sweet with the scent of rose bushes. 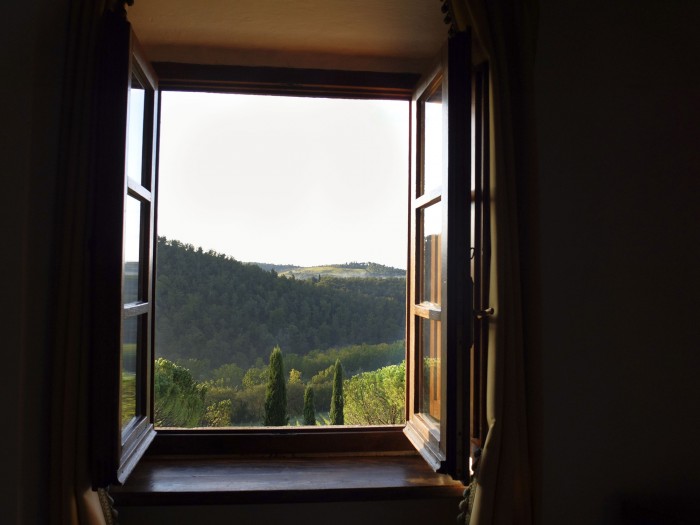 And suddenly, the sunshine…

Afterwards, I explored the property, a nicely maintained, compact and low structure with courtyards and wells, charming viewpoints. The church, founded in 1003, has an austere interior except for an 18th century altar and organ, and being of a good size, it’s ideal for weddings. 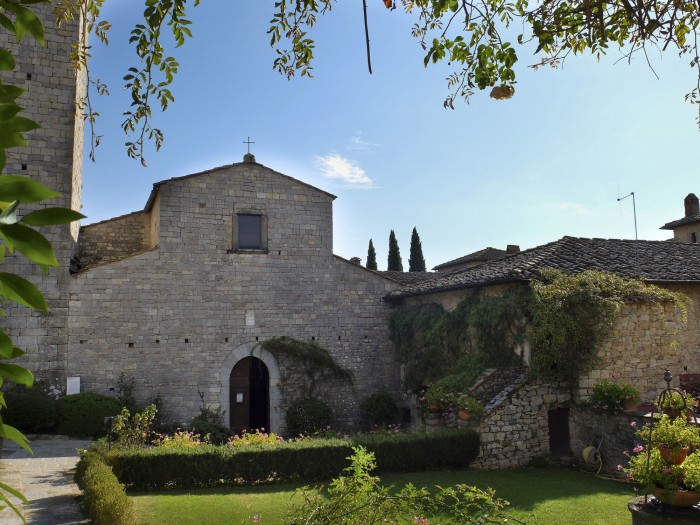 A loggia on the back of the building

In total we spent 24 hours at Castello di Spaltenna, a relaxing getaway from Florence without any particular destination other than the restaurant and the hotel itself. A spa opened in 2014 (including a heated indoor pool, a rarity in Tuscany) was a great way to spend a rainy weekend afternoon, while the classic hotel rooms are cozy and full of character. 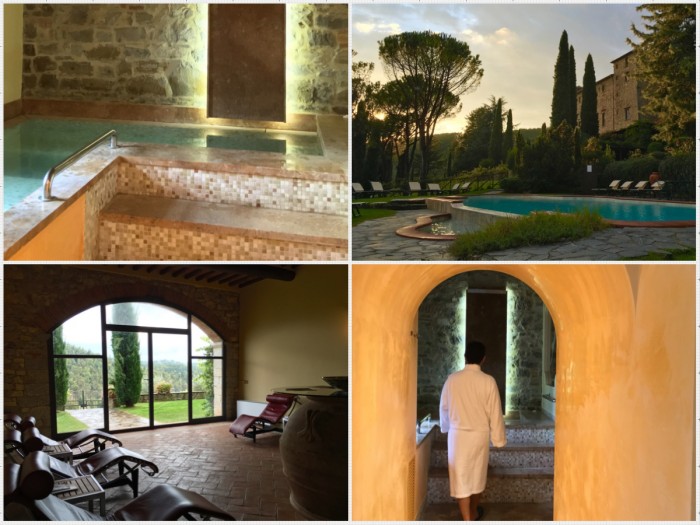 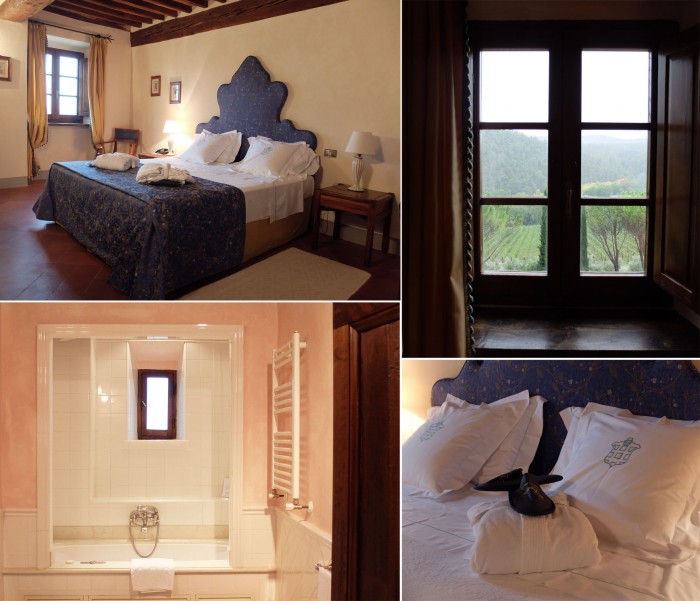 Disclaimer: I received a comped stay and meal, but this article contains my honest review of the experience.