Prato is one of the most multi-ethnic cities in all of Europe: of 200,000 residents, 18% are foreigners – not just Chinese, but 119 different ethnicities. In Italy, it has the highest percentage of Chinese population. It’s had its problems, but with time, it’s become a model for integration in the schools, social services and community groups. The Facewall Prato project began last year in the city to raise awareness through images, and now, the results are on display at the city’s Museo del Tessuto. 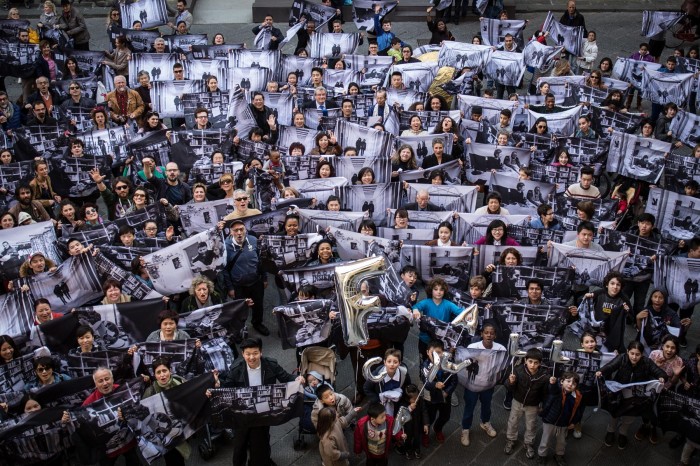 In 2013, afternoon in the summer of 2013: two Chinese and three Italians found themselves talking until sundown about the necessity of bettering Prato’s image, of changing the perception of those who look at the city from the outside and of those who live on the inside, creating a cultural marketing project capable of favouring and promoting exchanges between people and possibilities for the future. As a result: one hundred beautiful photos of encounters, of collaborations and friendships, were taken by Ilaria Costanzo. In 2014 ten thousand banners were printed with these images, given freely to anyone in Prato who wanted one, hung from windows and balconies, in the streets and in the piazzas. And now, in 2015, there is an interactive exhibition of them, with the addition of fifty short films, at the Textile Museum in Prato, weaving in the textile concept with the title “Interwoven Worlds”. All this has been accompanied by a social acting laboratory called Compost Prato that proposes occasions for interaction, reciprocal listening, and dialogue between members of all ages, genders, and professions within the two principle communities: local and Chinese.

Amongst the requests of Compost Prato are some best practises for the city and its inhabitants: “First: every communication at the civic level must be in at least three languages: Italian, Chinese, and English. Second: ask the people of the city to organize spaces in which, between a game of Mahjong and Tresette, between a cup of tea and a glass of Chianti, the ritual of reciprocal listening is guaranteed by the presence of the dedicated facilitators. Third: give the maximum attention, with every theme and problem, on learning from the experience. In other words, don’t argue and make decisions behind closed doors, but get off your butt and go “see in person” all together, as much as possible,” says Marianella Sclavi.

The stories of the friendships and encounters represented in the photos are told on the website facewallprato by Pratosfera journalists Alessandro Pattume and Lorenzo Tempestini. They are beautiful and worth reading. There are inter-racial couples, soccer friends, seniors teaching each other, colleagues in textile factories… beautiful people and glimpses into their fascinating everyday lives. If you can’t make it to the Museo del Tessuto to see these stories come to life through longer videos and wall text, explore the website, for it will make you richer.