Lucca’s 100 churches (I only saw three of them today)

Today we were privileged to have the best kind of guide to the city of Lucca: a local. Or, failing that, try this: Authentic Tuscany (Touring Club Guide)

. On a cold winter’s day, we managed to see only three of the city’s 100 churches (for which it gained its name “La citta’ delle cento chiese”), consume one long lunch, and make two bar breaks. I came away with the impression that Lucca is a charming city with nice people, good food, and good shopping too. I know I’ll be back as there is a lot more to explore. It’s only 80km from Florence on the A11 highway. 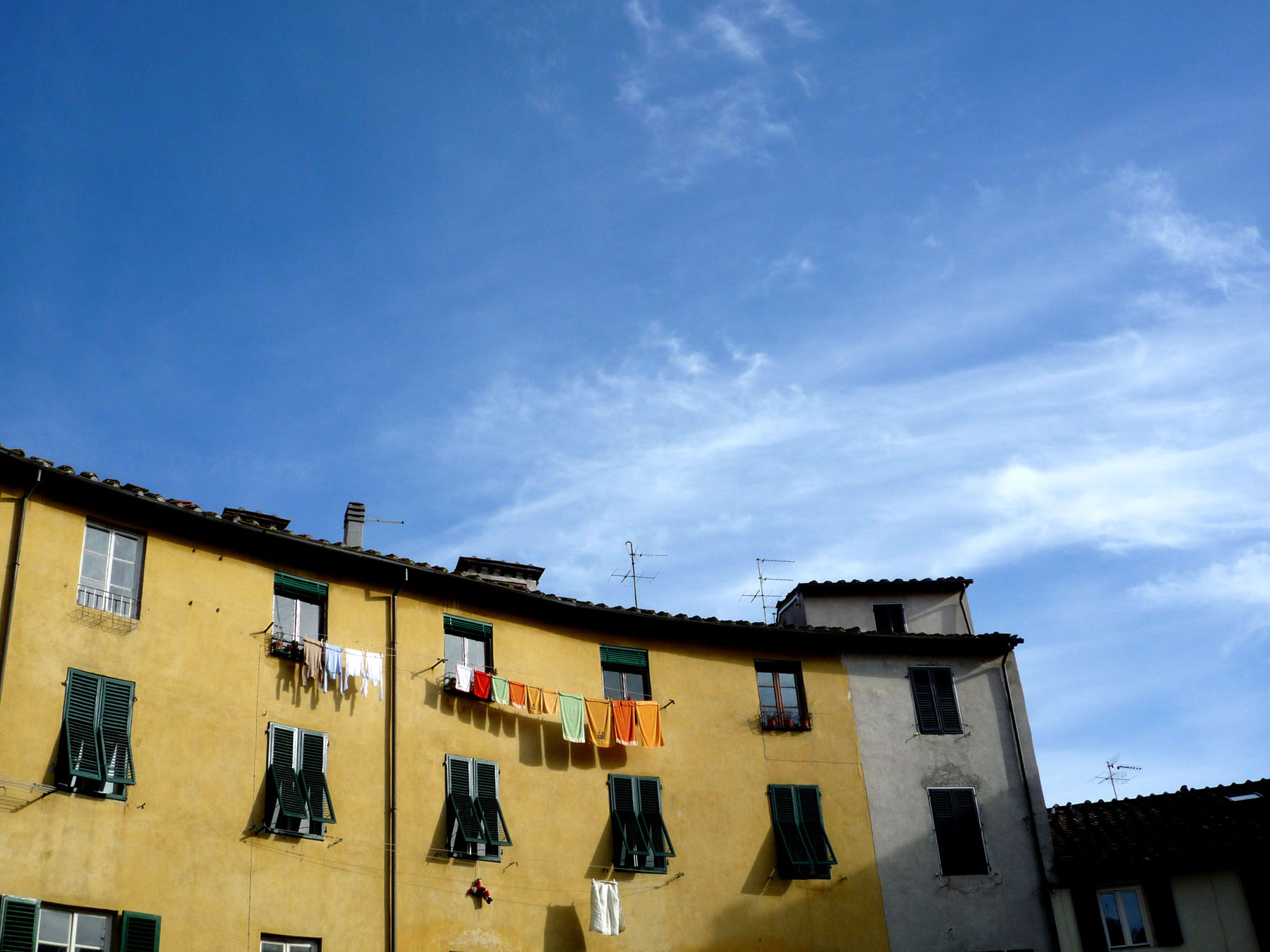 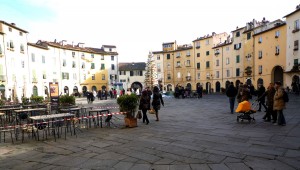 A bit of HISTORY: Lucca’s indigenous settlers were conquered by the Romans in 180BC, the imprint of whom is still clearly visible in the cardo and decumans that meet at the present piazza San Michele in Foro. The shape of the ampitheatre is preserved as an open, oval piazza of the same name, now surrounded by nicely restored medieval buildings (extremely picturesque, especially at night). Under Lombard rule, Lucca became a powerful city on a handy trade route to the North. Medieval Lucca appears to have been prosperous, as many buildings were begun in the mid 11th century, and still preserve their luccan-pisan romanesque style (which consists, it appears, of many small blind arches in vertical rows).

WALLS: Lucca is pretty much at sea level, and not far from the sea in fact. It is enclosed by an impressive set of walls that were built 1544-1645. For me, I found it interesting to approach a walled city at sea level, being used to coming upon walls built into hillsides, like Cortona and Orvieto, just to name two (although there are obvious exceptions, like Florence, where the walls are however no longer intact). Lucca’s walls are 30 meters wide at the base, and 12 meters high. There are U-shaped enclosures that used to hide canons. Their thick and angled construction is designed to resist gunfire. Apparently, they were built against the threat of Florentine invasion, but never tested. They remain entirely intact, and a park has been created above them that makes for a pleasant picnic or walking place in the warmer months.

UNESCO HERITAGE: Lucca has been proposed as a Unesco heritage site because of its perfectly preserved walls. They write on their website: “As opposed to the few other walled cities in Italy, such as Portoferraio, Ferrara […], where the walls were built at the same time as the city, Lucca’s Renaissance walls were erected encircling a pre-existing city that had developed harmoniously for several thousand years. Furthermore, the walls of the above-mentioned cities are far less  homogeneous and well-preserved.” I could not agree more. 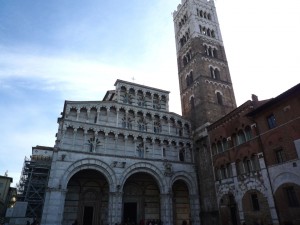 CHURCHES: We made a point of visiting the three most important romanesque churches in the centre of Lucca. The Duomo, or Cathedral, is named after San Martino. Like many churches in Italy, the present church is built on earlier foundations. The 11th-century facade rises up above an irregular piazza. Numerous blind arches and polychrome marble create a sense of movement in the upper storey, while below the portico, carved marble reliefs narrate the Life of Saint Martin and other stories (begun 1233 by the Lombard master Guido da Como). The somewhat dark interior is in the Gothic style (14th/15th centuries), and houses two particularly important works of art, from two distinct periods. Jacopo della Quercia’s marble tomb of Ilaria del Carretto (1407-12) is a transitional tomb sculpture that combines the traditional medieval reclining figure of the defunct with a base of carved putti that imitates Roman garland sarcophaghi very closely, anticipating Renaissance ideas. The artist likely had access to Roman examples in nearby Pisa at the Camposanto. This work can be visited for a fee in the sacristy.

The second important work in the Duomo is the Volto Santo (holy face), conserved inside a freestanding octagonal tabernacle (designed by Matteo Civitali in the 1480s). [See relevant Wikipedia article] The feast day of September 13th is dedicated to this sculpture that miraculously arrived on the shores of Lucchese territory (at Luni) in 742. The Byzantine sculpted christ, with its dark skin and long robe, is said to have been carved by Nicodemus, who had trouble completing the face and was helped by angels. While first collocated in the basilica of S. Frediano, the sculpture apparently wanted to reside elsewhere, and began making trips to San Martino, where the church was eventually restored and redidicated in order to house him. This trip is commemorated by a procession on the abovementioned feast day, although the sculpture itself is no longer transported as it was in earlier years. 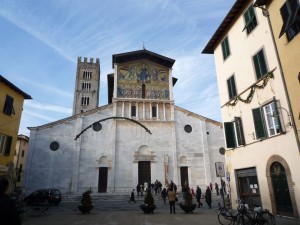 The church of san frediano

The church of San Frediano (the volto’s first house) has a flat, rather than articulated facade, in order to accomodate a 13th century mosaic (much restored, however, in the 19th century). Its austere interior conserves a number of gems from various periods. The best known is the Fonte Lustrale, a huge baptismal font to the right of the entrance. More fun is the chapel and “mummy” corpse of Saint Zita, who lived in the 13th century and looks awfully good for a 700 year old. In the chapel to the left of the high altar, worthy of note is a sculpted altarpiece by Jacopo della Quercia. The chapel of Saint Augustine (second chapel left of entrance) has quite nice frescoes by Amico Aspertini (1508-9); of interest, the fresco on the left that illustrates the transferal of the volto santo from Luni to Lucca, which shows what the statue looked like at the time (pretty much the same as it does now). 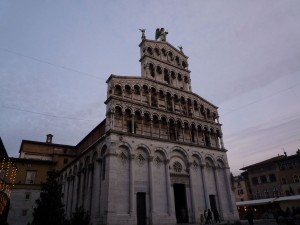 The church of san michele in foro

I promised a third church, and indeed we did visit the church of San Michele in Foro, begun in 1070 and completed in the late 12th century upon preexisting foundations (as usual). Night was falling, hence the pinkish photo of the facade that is topped by a gigantic sculpture of the saint with bronze wings. Our friend Fabio told me that during the 18th century restoration of the facade, they snuck in portrait heads of contemporary men, so apparently if you bring your binoculars, you’ll spot Napoleon up there.

We returned to Piazza dell’Ampiteatro to witness the murano glass christmas tree lit up for the night, and a play of lights that has been set up against the medieval facades. 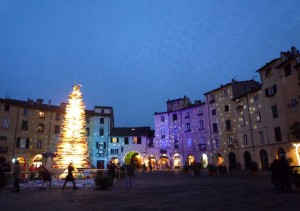 LUNCH: Gli Orti di via Elisa is not slowfood, but could well be. While mostly dedicated to Lucchese specialties, I tried the Testarolo “artigianale”, a kind of pasta (more like a pancake cut into pieces) typical of the comune of Pontremoli in the province of Massa Carrara (which honestly is not that far away). This particular Testarolo is a Slowfood Presidia , a kind of recognized heritage object that is subject to various rules about biodiversity and local production. In fact, the special grain used to make this particular pasta is cultivated (according to the pamphlet given to me by the restaurant owner) by exactly three farmers. My Testarolo was served with delicious new oil (locally produced in Lucca), cheese, and basil leaves. The locale is carefully decorated in all its details (nice glasses and linens), and while spacious enough to accomodate large groups, is relatively quiet. Prices very reasonable.