See this street sign for via de’ Tolomei? It’s on the side of an old one-room schoolhouse, across the street from our home in Sticciano, in the Maremma area of Tuscany. 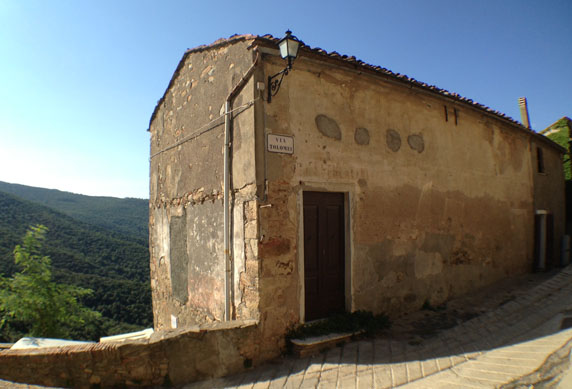 While I was looking for events and things to do in Maremma this summer, I came across a celebration called the Salto della Contessa that is held annually in August in Gavorrano. The celebration commemorates the death of the young and beautiful Pia dei Tolomei, which Dante mentions in canto V of Purgatorio, the only mention of the Maremma in the whole book and considered a particularly beautiful verse.

Needless to say, we went to the popular festivities in Gavorrano in order to find out more about the Tolomei family, the namesake of our neighbouring street, and what happened to poor Pia. I learned a bit through the historical reenactment, a bit more by talking to the waiter and neighbours at our table at a local restaurant, and a bit more online. It turns out that Pia holds strong in popular culture even today!

Pia de’ Tolomei at the window in Gavorrano

The Tolomei were an important family in Medieval Siena. The young and beautiful Pia was given in matrimony to Nello dei Pannocchieschi (born 1248, he was an old man) probably around 1297. He was the lord of Castel di Pietra, a now-ruined castle near Gavorrano, and controlled much of this territory, as well as acting as podestà (elected temporary leader) of various towns in Tuscany over the years. The marriage was of course set up for political reasons, perhaps – though this is my own speculation – a part of Siena’s ongoing attraction to the Maremma, which they would eventually take over.

The historical record is not precise, but there are various suppositions about what happened to Pia – if Pia de’ Tolomei actually existed (there seems to be some doubt that she was actually a Tolomei, and may have been so by marriage rather than by birth). Her husband killed her, this much we know, likely throwing her from a window of the castle after holding her prisoner there for some time. The supposed motivation was adultery, which he may have suspected based on a tip from a “friend.” The “adultery” (quite possibly false) may well have been an excuse to get rid of the Sienese girl for a more desirable match, either for love or political reasons. For Nello then married Margherita Aldobrandeschi, whose family was well rooted in the area of the Maremma: the Aldobrandeschi and Ardengheschi families were the two most powerful families in Maremma and they tended to fight for hill towns and related territories. 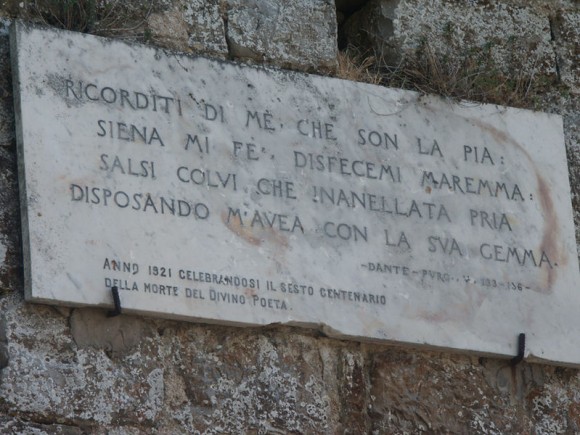 Plaque commemorating Pia and the relevant verse of Dante on a wall at Castel di Pietra – souce: wikipedia

When Nello died in 1322, in his will, he recalls his daughter Fresca, who was married to a certain Bindo da Sticciano, of the Ardengheschi family. Sticciano was, in fact, under Ardengheschi control in the thirteenth century. It’s a stretch, but perhaps Fresca and Bindo lived on via de’ Tolomei in Sticciano, recalling the family of the woman who might have been their mother.

In Gavorrano, Pia and her leap to death has been commemorated annually for at least a decade. A parade of villagers in historical costume and an exhibit of skill by flag throwers kicks off the evening of celebration, which is accompanied by food and crowds. 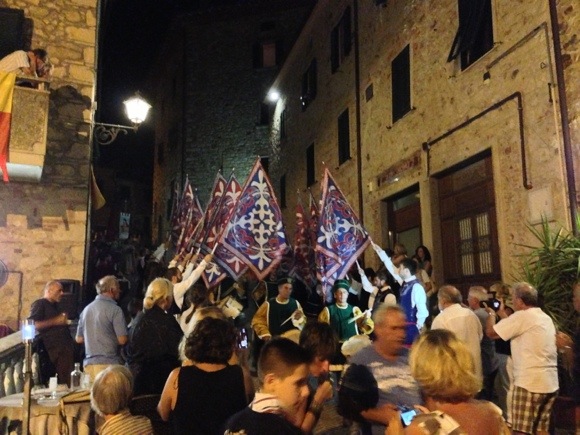 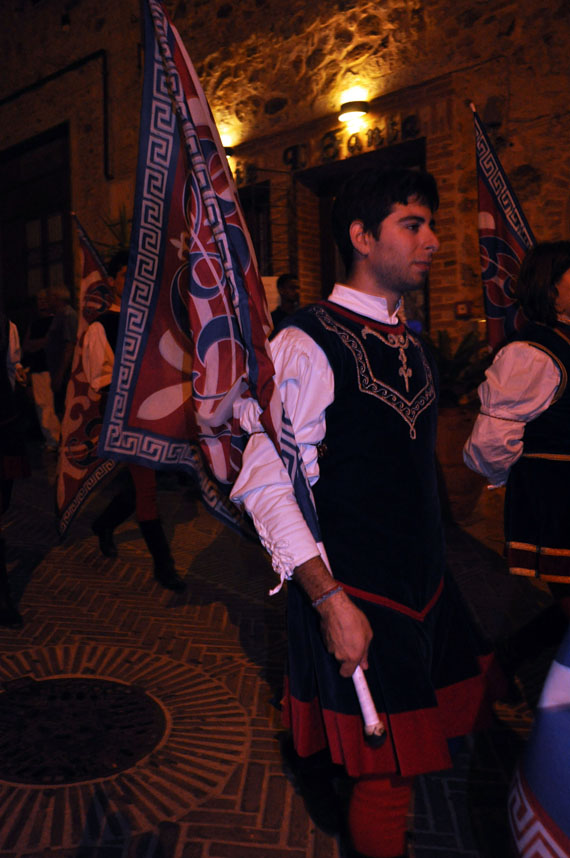 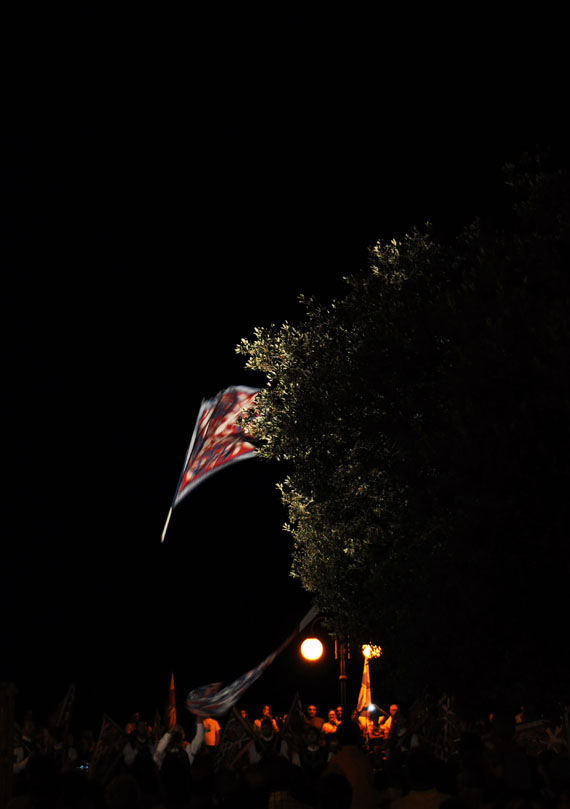 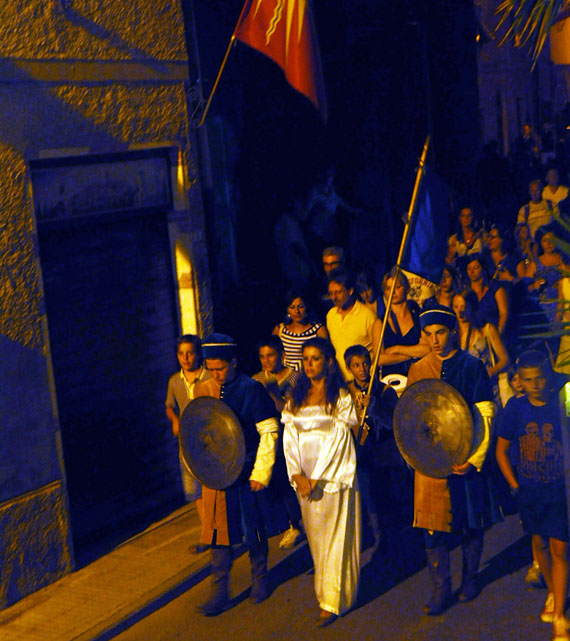 Pia being led to her death

Around 11:30pm, the much awaited happening lasts only 5 minutes. A voice reads the verse from Dante’s Purgatory:

A spotlight shines on a medieval palazzo, to a window on the third floor, where we see a couple struggle… with a scream, the lovely girl drops to the ground. Splat. The crowd points cell phones and cameras to the window and cheers as Pia falls to her death. Tommaso caught it on video.

You can visit the “corpse” afterwards. 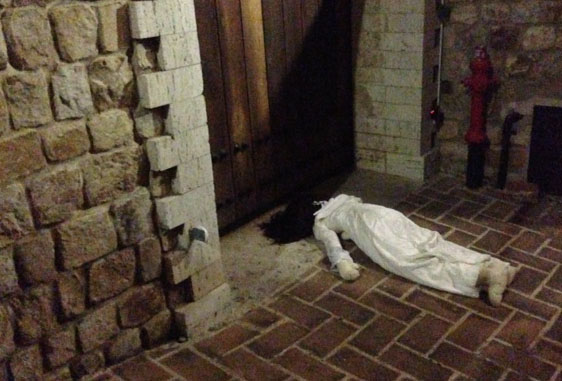 The surprisingly life-like doll who stood in for Pia

The story seems to have popular appeal now, just as it did in the 19th century, when the Pre-Raphaelites resurrected a particularly romantic vision of Dante. In the 1860s, Gustave Doré engraved illustrations of Dante’s tome, and pictured Pia de’ Tolomei encountering Dante in the woods, wearing the long hair and a simple robe typical of Pre-Raphaelite style. 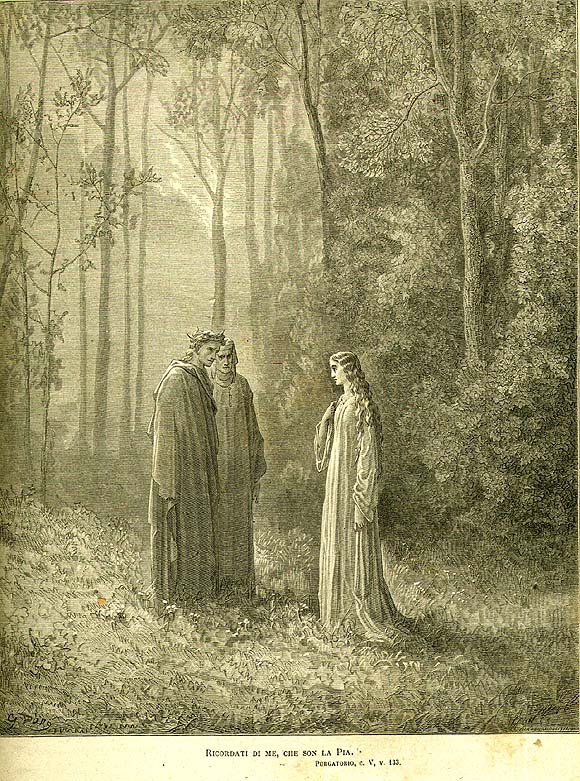 Doré’s is not the only 19th century representation of Pia, who seems to have triggered the imaginations of half a dozen poets and musicians. In the 20th century, her name is the title of at least three films

The Italian rock star Gianna Nannini wrote a rock opera inspired by Pia de’ Tolomei, entirely in iambic pentameter, which was presented at the Festival of Sanremo in 2007. The performance is absolutely beautiful and emotional (despite the talented but weird interpretations of modern warriors doing a choreography behind the singer). In the short interview that follows, Nannini declares that “Pia possessed me.”

When we went to witness the Salto della Contessa, we ended up quite by chance with the best seat in the house: an outside table just meters from the historical reenactment, in the best restaurant in town, Osteria Il Fanta (via Terranova 8, Gavorrano – 0566/844995).

This family run restaurant with modern décor (a refreshing break from the “typical tuscan” look preferred in the area) and 6 outside tables serves both fish and meat based dinners – that night we stuck to fish, being August and within view of the sea, but come Fall we’ll be back for cinghiale (or at least Tommaso will – I am vegetarian). Although we were there on what may have been the busiest day of the year – the town fair, just before Ferragosto and high tourist season – we found the service to be friendly and the food of excellent quality, with attention to my food allergies. We particularly enjoyed chatting with Marco, the son in his late 30s at the head of the family business, who is internet-savvy and enjoys decreeing Tripadvisor reviews out loud in the style of Dante. A recommended restaurant any time of year, but if you’re going to learn about Pia de’ Tolomei as you eat, we suggest reserving an outside table for 9pm. 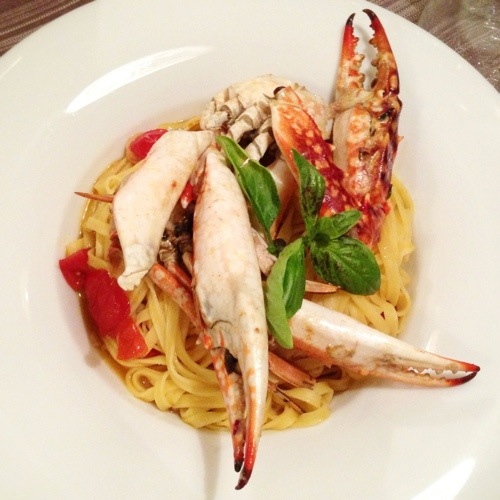