In this guest post, Maremma resident and journalist Elisa takes us on a tour of one of the lesser known art parks in Maremma.

Piero Bonacina’s sculpture garden sits high on the hills of Montegiovi in the Tuscan Maremma. The garden, affectionately called Arte e Parte, is perched so precariously close to the edge that if you look out past the last line of trees and sculptures, all you can see is the Tuscan countryside tumbling purposefully into the horizon. 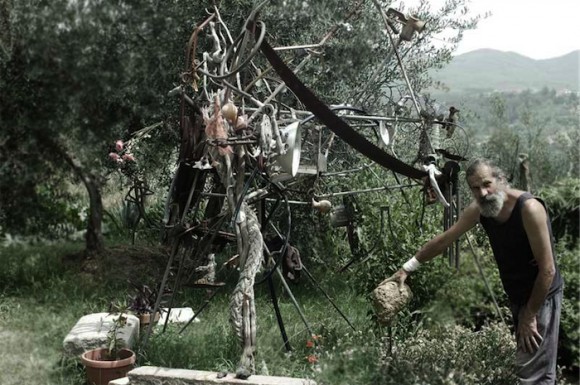 Like the Maremma itself, it’s wild, the sculptures utterly free from the strict bounds of structure or style. The entire effect is modestly brilliant.

You don’t feel like you’re walking into a gallery or an art park when you walk into Arte e Parte. There is nothing typical or commercial about it. The visiting hours are very loosely set and your visit is free, which is exactly the way Piero likes it.

That might not be what you want to hear. In fact, you might already be thinking that this sounds less like an art garden and more like the muddled scrap heap of an eccentric loon who thinks he’s an artist. But you’d be wrong.

Arte e Parte is one of the most popular artistic and cultural sites in Monte Amiata. It’s in all the tourism pamphlets. The only thing preventing Piero from charging a pretty fee is a Buddhist belief that he has been applying for more than two decades. It’s one that believes in the freedom and universal appreciation of art.

Piero himself has been an artist for more than 30 years and has had his work displayed everywhere from New York to London. Currently some of his most striking pieces sit in the Palazzo Nerucci gallery in Castel del Piano.

He was born in Milan, but drifted his way down to Montegiovi, unconsciously drawn to the mysticism of Monte Amiata and the nearby Buddhist temple, Merigar. He’d never admit it, but he draws inspiration from being so close to Merigar. Buddhism features heavily in many of his sculptures. 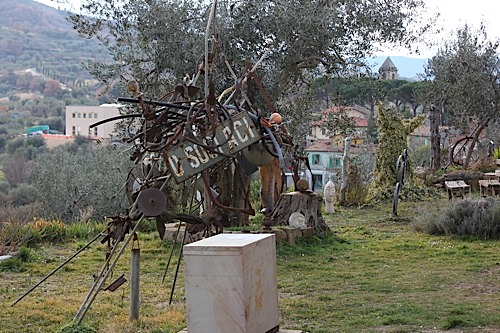 Apart from that, there is no rhyme or reason to the artwork you see. Instead the garden is a lifetime’s worth of creative passion. Like Picasso, Piero has gone through his own periods, from cubism to abstraction, but more often than not, his pieces are influenced by what is happening at the time.

“11 Settembre” is Piero’s take on the September 11 attacks. Piero had just returned from New York when the Twin Towers were struck and the crumbled metal in this piece is his way of processing the experience. Interestingly, ‘’11 Settembre’’ appears detached from the reality of the attacks. You mightn’t even know they were its inspiration if Piero didn’t tell you.

Many of his sculptures are like that – inspired by world events, but removed from them, as if the isolation of this garden at the very edge of small town Tuscany has dulled the impact, distorted the reality of the world.

Some of Piero’s most alluring pieces are made of endlessly exquisite curves. When Piero is not working with steel and scrap metal, he’s carving august trees into sculptures that are so intricate and fluid, they defy the material they are made from. 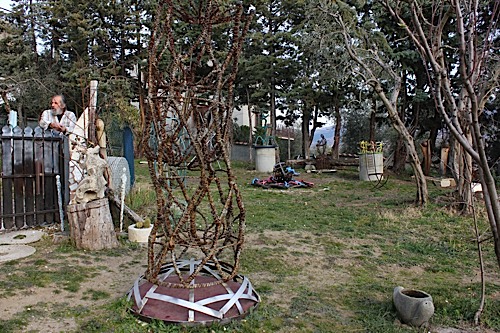 Piero prefers to use local oak, but until you get up close and actually touch the sculptures, you can be forgiven for thinking they’re made from a more pliable material like plastic.

It seems everything in Piero’s garden is not what it seems. His greatest inspiration is man, but again, he is a distorted representation. The twist of a woman’s form, the entwined bodies of two lovers and the unifying feeling of communal celebration in.

At first, you might need Piero to explain what you are seeing. But after he’s described one sculpture or two, the rest will open to you like the petals of a magnolia. What seemed like a cluster of wood, steel and scrap metal will take on a sheen of wonderment and thoughtfulness. And if Piero likes you, he might even let you help him finish varnishing his latest creation.

But just remember, the Tuscan Maremma is not Florence. Piero Bonacina does not create ostentatious and decadent Renaissance masterpieces.

The most beautiful Maremman art is that which reflects the territory itself. The Maremma is understated, rustic and rampant. Its beauty is tied to nature and rich traditions, to its contadini culture and quiet lifestyle.

Piero’s garden embraces that. It is after all, a quiet garden in a quiet corner of country Tuscany.  The life’s work of an artist with a humble and honest aesthetic and the depiction of the splendor around him.

Elisa Scarton is an Australian journalist who came to Tuscany for a year, fell in love (how cliché!?), and decided to stick around. Not one to keep paradisiacal holiday destinations to herself, she now writes a blog and online travel guide about the infinitely beautiful Tuscan Maremma, so that others can get a taste of la dolce vita.