I Finally Went to the Viareggio Carnevale!

If you think of Italy and carnevale, chances are the elegant masks of Venice come to mind. But anyone who has spent any amount of time in Tuscany will have heard of the famous Viareggio Carnevale, with its procession of massive floats dedicated to world politics. There’s no question that 2016 has given the papier-maché artists a whole lot of fodder for their satirical scenes, so for the first time I finally decided to go to Carnevale, and make a weekend of it. 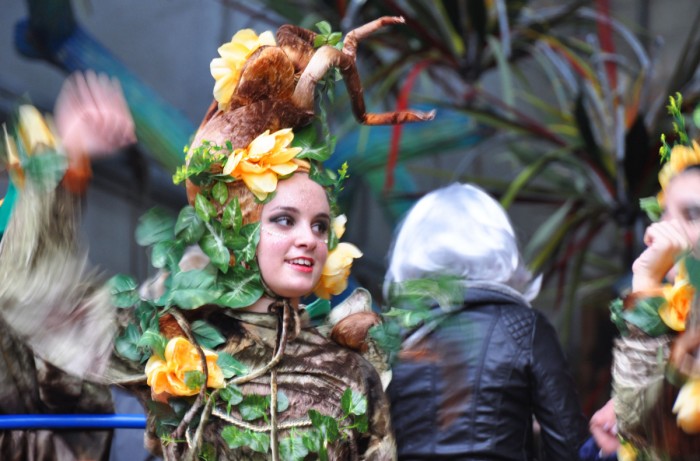 A dancer on one of the major floats

Viareggio is a beach town located about an hour away from Florence. In the summertime, I admit, it’s not my favourite beach – I tend to prefer the less domesticated Maremma. In the winter, it’s fascinating to visit. A walk on the town’s long boardwalk or flat sand can clear away months of big-city respiratory ailments. We planned to spend Saturday and Sunday in Viareggio – the carnival processions are almost all on Sunday afternoons – and we figured we might as well do it in style. My husband Tommaso said he really wanted to stay at the Grand Hotel Principe di Piemonte, which was something he heard about when he used to go to Viareggio with his nonni – it was considered a kind of unreachable luxury, the top place to go if you could afford it. Opened in 1925, it has in fact been home to aristocrats and the scene of numerous films. It hasn’t lost its splendour, with fabulous thematic suites, a 2-Michelin-star restaurant (only open in the warmer months) and a rooftop saltwater pool. I figured even if it rained on the parade, literally, it’d be a good time. In fact, that was good thinking, for it poured…

A bit of history 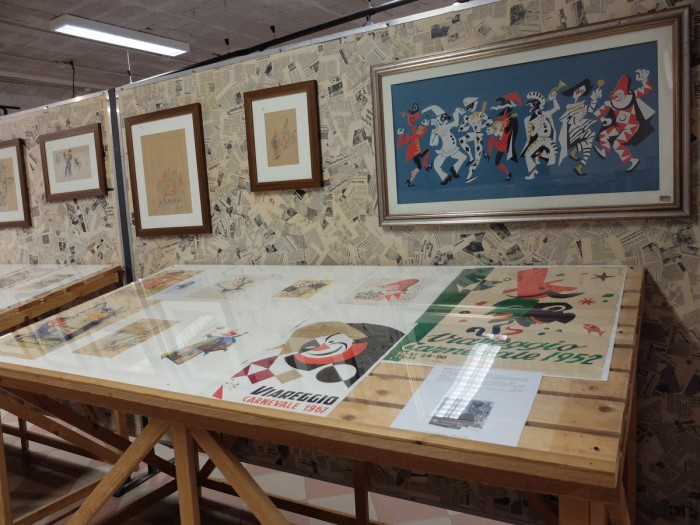 It’s useful to make a stop at the Citadella del Carnevale in the days leading up to the first parade, for this is a huge structure of hangars where the floats are constructed. You can see the artists at work – even after the first parade, many are not done yet so you are likely to catch them there in the second and third weeks too. And there are two small museums worth visiting to get a grasp on the whole event. One is dedicated to the history, with informative boards and a display of past models and drawings, posters and more. 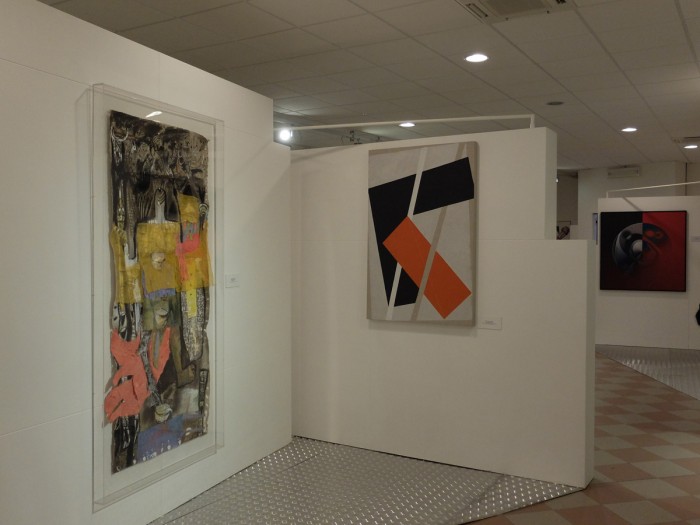 Upstairs is a contemporary museum that houses the work of art that is actually the prize for each Carnevale! The float maker receives it, and then gives it as a gift to the Foundation that runs the event. (I asked if anyone has preferred to keep it; apparently not.) These works are contemporary painting and sculpture by important Tuscan or Italian artists and some of them are very nice indeed. 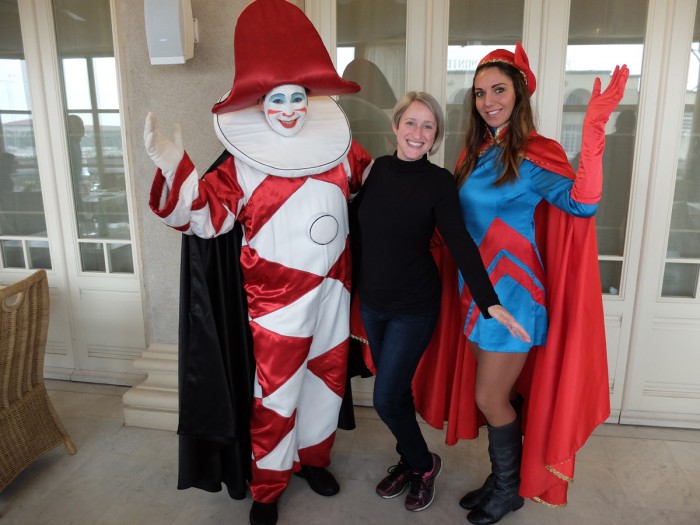 Burlamacco, me and his sidekick Ondina

So it’s here that I learned that the very first Carnevale was a procession of ox-drawn carts in 1873, which went on for a few years and grew in size. In 1930, local graphic designer Uberto Bonetti designed Burlamacco, a futurist clown of sorts, inspired by the Commedia dell’Arte, who became the festival’s mascot (I caught up with him over brunch at the GH Principe di Piemonte!). There was a pause for WWII, which allowed the city to get fully organized, and it relaunched as a major Italian event, recognized and televised nationwide and gaining international fame as well. 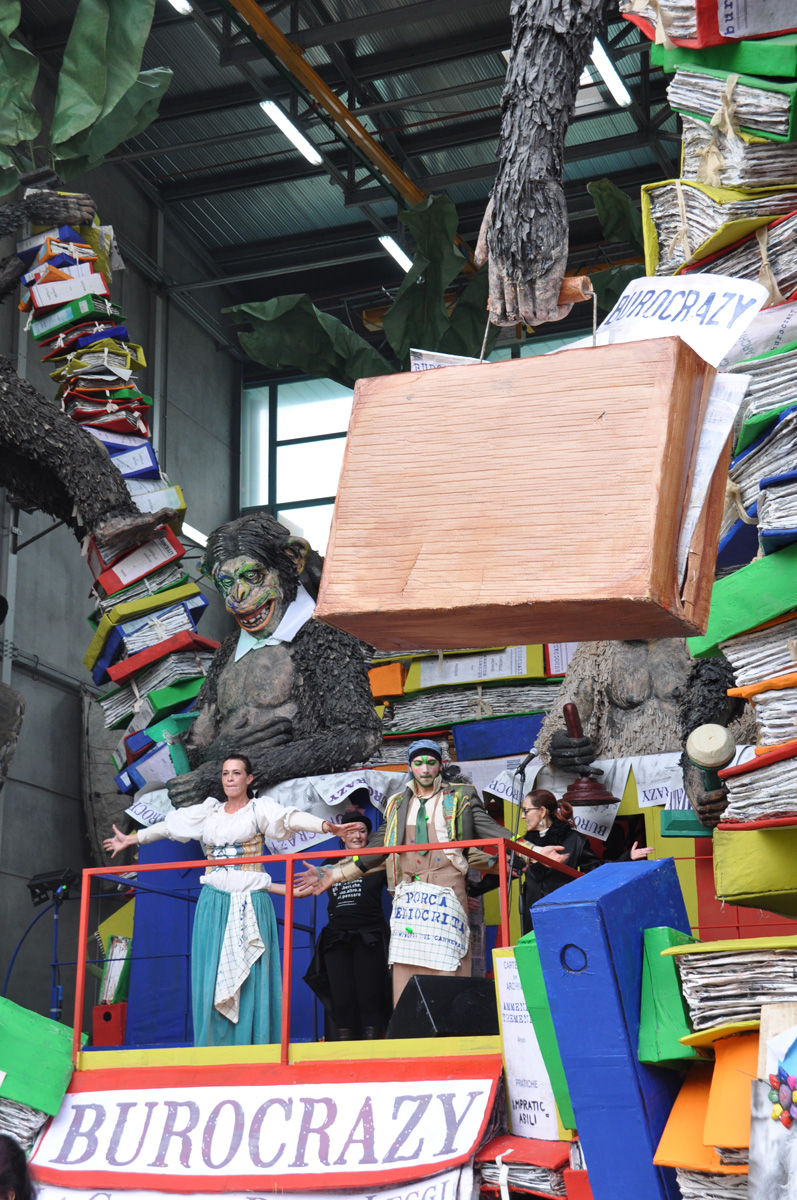 Burocrazy, one of the major floats in 2017

Viareggio is a beach town. Have you ever visited a beach town in the winter? They’re usually kinda sad and empty, right? Viareggio had the brilliance of turning the Carneval into an industry. I did not realize before how important it is to the whole of the city’s economy, not just in bringing in some off-season tourists. This event has a €5M annual budget that comes from government funding as well as private sponsors. The float-makers, once accepted for that year, are given budgets to create their work of art; the first category floats have a €124,000 budget. With this, the group pays rent on the hangar and all materials (including generators and boom boxes), as well as employs full time staff for a period of 5-6 months. Up to a third of the city’s population is employed in this manner! During the summer months they usually work seasonal and mostly unrelated jobs, i.e. they are not all building sets for theatre as one might think. Actually, everything from engineering and welding to hard labour or painting is required to complete a float.

The floats are divided into different categories. The largest and most expensive ones are of course prima categoria. The seconda categoria floats are not much smaller, but are somewhat less ambitious (though if they excel it’s because they’re trying to win the prize and move up to the next level next year!). Then there are mascherate and finally maschere isolate. The aspiring float-maker has to start at the bottom and win the prize two years in a row to get to the next level. The top spots are usually kept for a long time and technically can be inherited within a family. 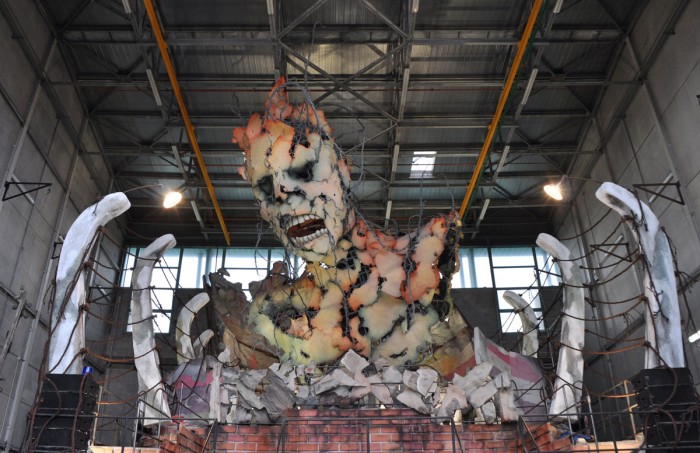 The float dedicated to Migrants

Floats are built with metal structures, styrofoam, and paper-maché made of used newspapers and glue from flour and water.

This one had great music and dancing!

Every year, the majority of the themes are political satire or social criticism. This year the first level floats took on: migrants, Trump, China as a superpower, bureaucracy and global warming. Others address wider concepts, like “Boruca” which is a tribute to an independent, indigenous community of Costa Rica or “The seed of beauty” (by last year’s winner) which hopes for rebirth “in the sign of beauty”. 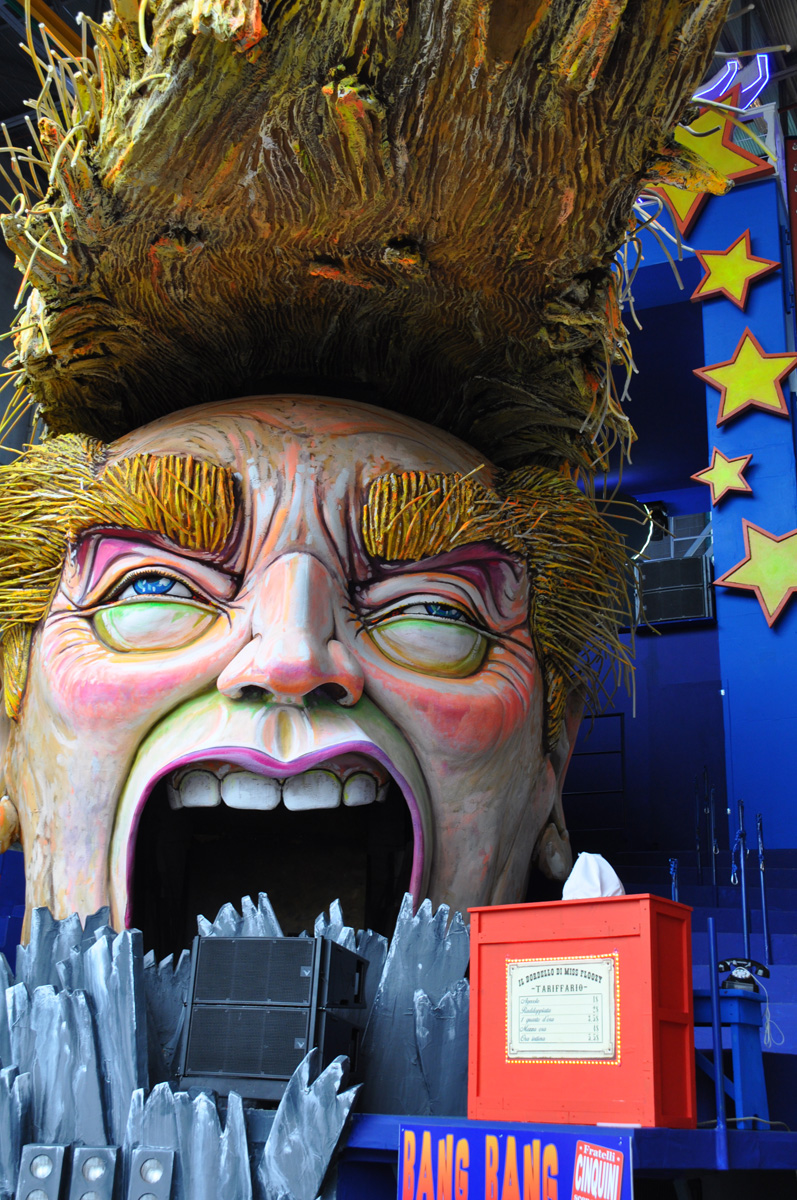 Given the difficult topics, you may have figured out that this is no kids’ party – it’s a good time for people of all ages for different reasons.

The 2017 [REVISED] Viareggio Carnevale dates are (moved to the following week due to wind and rain), February 12, 18 (Saturday night), 26 and 28, March 5 (grand finale and fireworks). The February 5 procession that I was supposed to see was canceled due to particularly high winds as well as rain. They usually go on anyway in the rain, especially if it’s the 4th or 5th procession, but the first date has a higher likelyhood of being moved ahead because nobody wants to wreck the floats right off the bat. Also, frankly, many of them are pretty behind in their construction so I think everyone was happy to have another week. Thanks to the excellent space of the Citadella, they moved the party there for the whole day of Sunday, where there was music and dancing and all sorts of fun. I don’t feel like I missed out particularly, though I hope to go back on a sunny day soon.

Tickets cost €15 for the opening parade and €18 thereafter (for adults). They can be bought online on vivaticket – take a look at the info on the official website.

There is a tribune (tribuna) available with seats should you wish, which are located at a central part of the route and that’s where the judges sit, so consequently, also where the floats will show off more (more dance, more difficult movements). These cost an extra 10€ and you order them by fax or email after you’ve already gotten your regular tickets. This is a good option if you’ve got mobility trouble, but otherwise there is nothing wrong with attending in the crowd. You can move around relatively well and you get multiple points of view when you’re down on the ground. There’s no risk of not seeing things because of people in front of you because the floats are very tall. 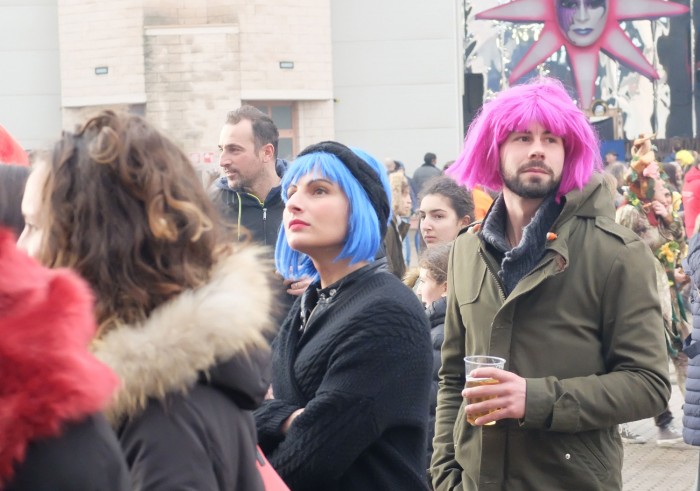 Because everyone looks great in a wig.

Although not everyone does it, dressing up makes you part of the fun! A wig or mask (which you can pick up at a cartoleria anywhere in Italy during this period) seems to be license to get wild, so get one! The locals all do it. 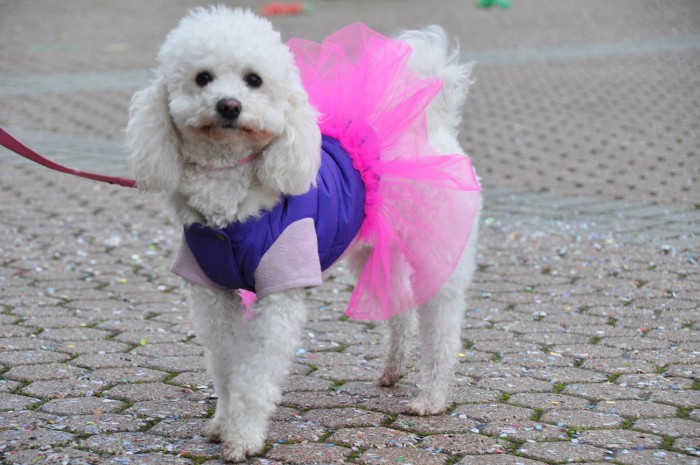 Even the dogs are dressed up (she’s totally posing for me, too!)

Another fun thing to do, and not just for kids, is to attend a paper-maché workshop. There is a schedule in a booklet you can pick up when you arrive, or contact the Citadella for details. They cost €4 and you learn how to make a small object, but you can also quiz their awesome staff (that’s how I got all this insider info!). Our hotel offered this workshop in-house and I’m really glad I went. We brought home our “masks” which will take a few days to dry before we can paint them with tempera paints.

We learned how to do papier machè!

Where to stay for the Viareggio Carnevale

Most hotels in Viareggio offer packages for the weekends of the Carnevale. We took advantage of this carnevale package from the Principe di Piemonte, which cost much less than I expected (€270 including breakfast, brunch (€40pp on its own!), parking, spa entry, heated rooftop pool access, carnevale tickets and a special gift for the ladies, for 2 people!). Staying here is worth every penny especially in bad weather because you can relax and have fun even in the rain (in 2016 it rained 4 out of 5 parades, while in other years it has been freezing cold). In the morning, the carri come out and park right in front in order to get ready before going into the parade area, so you have a few hours with them right in front – or under you, if you have a sea-facing room. Their brunch area also faces on to the street so you are in on all the action. 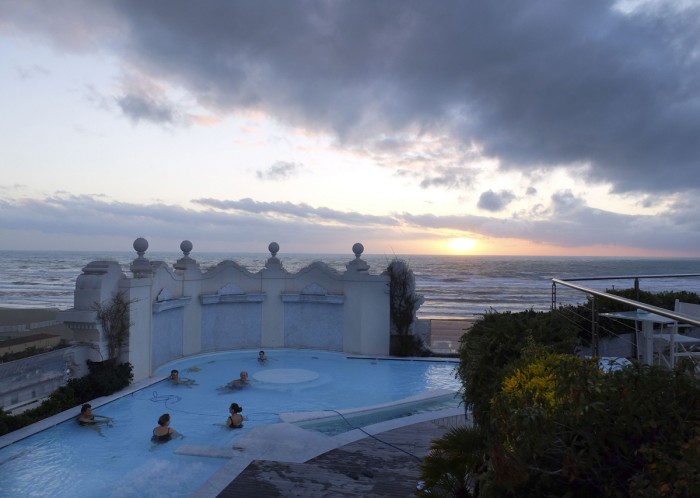 The rooftop pool is heated salt water with a view… of much colder salt water.

The carnival route itself isn’t very long, but one option is to look at what hotels are located on the route itself, so that you could watch a part of it from above. However, I learned that it’s really more fun to be right IN the crowd, where the party atmosphere is contagious! The Carnevale in Viareggio is a big deal, a matter of pride and anticipation for the Viareggini (as the locals are called), and it’s so much fun you can’t help but be swept along!