Painting a fresco is a lot harder than it looks

One of the reasons I became an art historian is that I am a very bad artist. I proved this again in a hands-on fresco workshop in Florence today. We were given a detail of a building in the Brancacci Chapel to trace and render on a small board, and mine turned out like this. 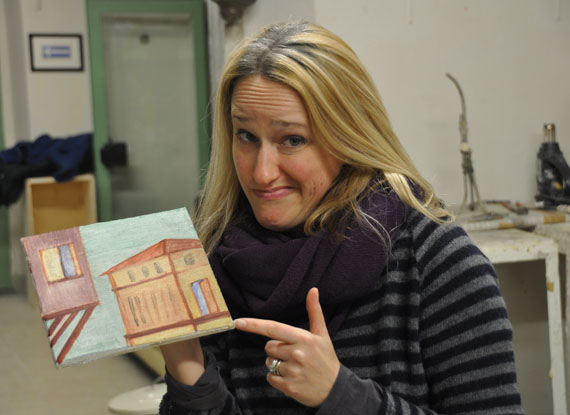 I left the prized artwork behind so people could use it as an example of how not to paint a fresco. This is what the original painting, which we went to see afterwards, looks like. 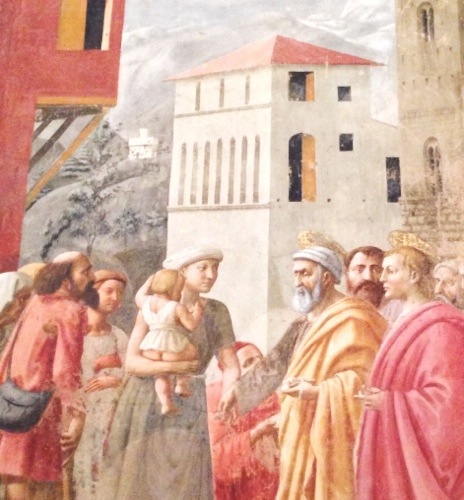 My sample was a total disaster for many reasons, mainly that my pigment was too wet and everything blurred together like a 3 year old playing with watercolours. The instructors were very nice and told me it was internally consistent, which basically means the whole thing sucks, not just a part of it. The fact is, getting your hands a little dirty really helps you appreciate how hard it is to work in transparent paints on wet plaster.

The two-hour hands-on workshop that I did today was part of a morning dedicated to frescoes offered by Alexandra Lawrence and her “so you think you know Florence” series of walks and tours promoted by The Florentine. The workshop was held inside the studio of an artists’ association in the Oltrarno called Accademia d’Arte San Giovanni and was taught by Luca Viviani. 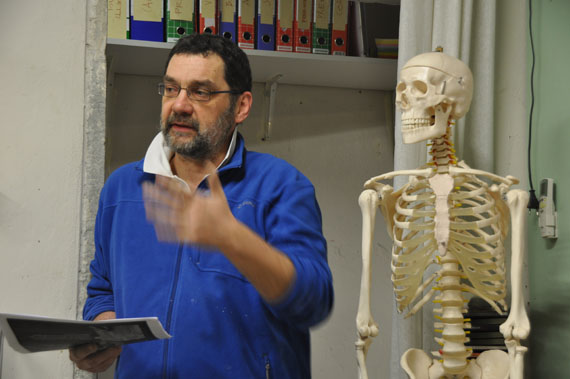 Luca explains the process to us.

They’re very organized, as two hours is not a very long time, and hardly enough to experience the whole process of making a fresco. However, it’s a good introduction. We arrived to find workstations prepared with tracing paper, a stylus, pencil, cardboard, brushes and pigments suspended in water. An assistant is delicately spreading the final layer of plaster on fifteen small square boards. Hours of preparation have already been spent to get to this stage. 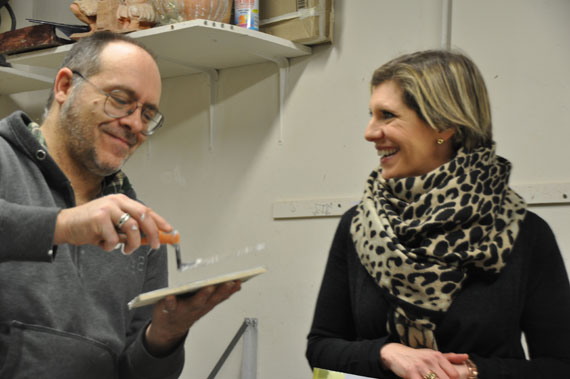 He’s preparing the boards, while Alexandra Lawrence, our guide, looks on.

I have actually painted fresco before, although you would never guess it from my results. But I had the fortune of learning historical techniques in a restoration class during the MA at Syracuse University in Florence, so I’d done the whole process on a wall. I wrote up those notes years ago in this post “How to paint a fresco the Renaissance way“, in which you can find the specific terms and chemical details about the process. I am a good theoretician. Technically I am rather more incompetent.

Our teachers spared us the arriccio (rough layer of plaster) and provided us with a wet board covered with intonaco, in which some marble dust has been added for extra shine. When I think that perfectly good materials were wasted on my artistic lack of skills, I shiver. We used tracing paper, pricked with a stylus, to transfer our traced drawing to the wet plaster. This is done by pouncing the paper with a cheesecloth filled with sinopia coloured powder. Here’s what that process looked like. 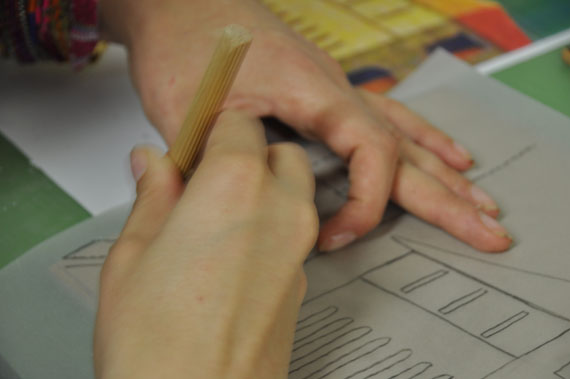 The hands of Georgette Jupe / http://girlinflorence.com/ 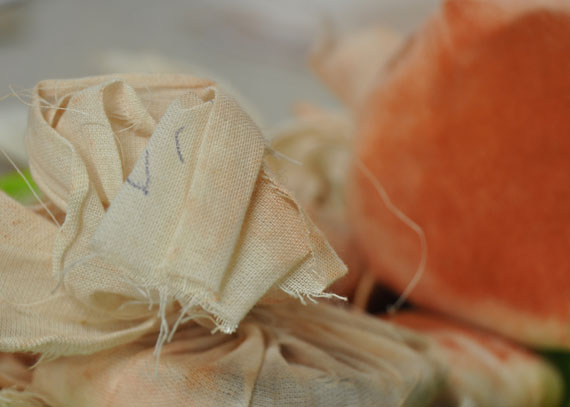 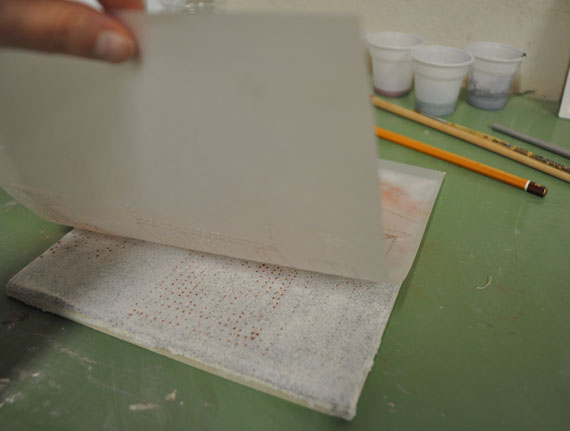 We were then instructed to use a small brush to join the dots with an orangey paint which creates an outline called sinopia. Sometimes you see detached frescoes displayed in Italy next to their sinopie (like at the Santa Croce museum), because these guidelines are usually covered by the day’s layer of plaster (giornata) before proceeding. In this case, it became part of the painting, which is where I erred greatly…

So far so good, my lines are quite straight!

The tough part about fresco is that the paint you apply is just pigment suspended in water, and it’s very transparent. You basically build layers one on top of another, but you cannot make mistakes. These lines were too heavy, and I couldn’t cover them up when it came time to fill in the colour. In my case I used too much water, producing a big mess. Many other workshop participants proved more talented, so I show you their results here. 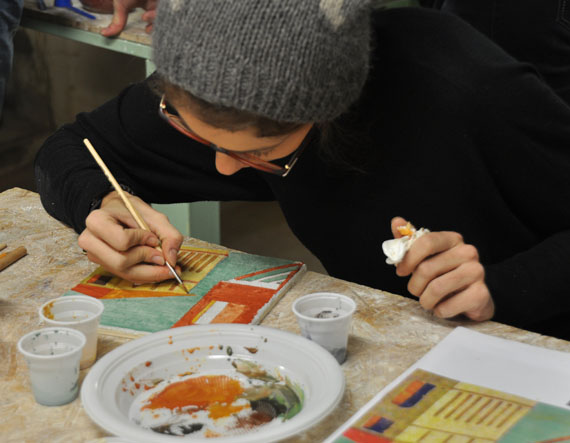 She actually is an artist

She’s an art historian, but has other talents. 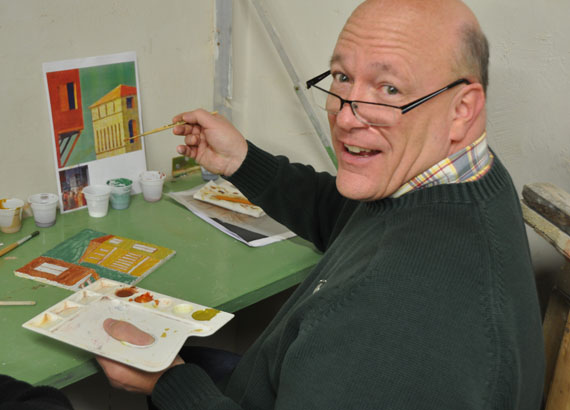 He’s a pastor. He is making a Fauvist masterpiece.

The group was great – many are “regulars” on Alexandra Lawrence’s walks, they are mostly resident expats, visiting professors, graduate students and other people who already have a good knowledge of the city. It was a pleasure to chat with them (also over the extended lunch that topped off the day’s activities!). 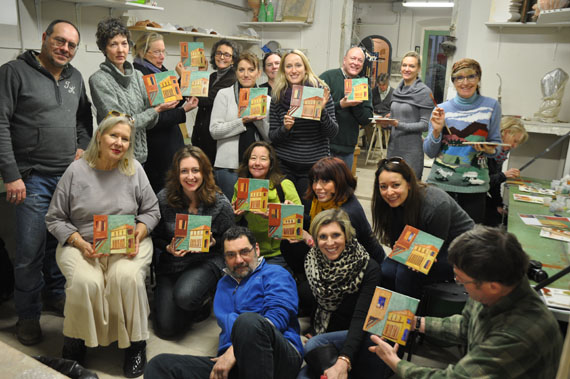 Each person in the group painted a different interpretation of the same scene.

After this eye-opening experience that confirmed that I have chosen the right profession, we took a short walk over to the Brancacci Chapel at Santa Maria del Carmine, where we could see what a fresco would look like if someone talented, like Masaccio and Masolino, painted it. The transparency of the paint, the stylus lines, the day’s plaster are all freshly apparent when you look at details like this (the bottom of a cloak and a figure’s ankles). 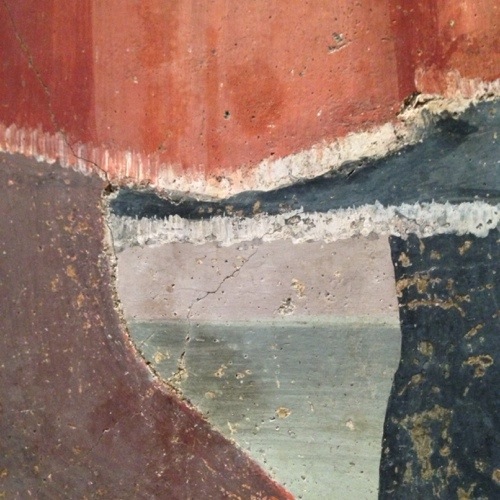 Alexandra Lawrence, who is The Florentine’s editor at large and a licensed guide in Florence as well as a professor, has a real passion for art and history. She hasn’t formally studied art history, though she knows more about this fresco and the story behind it than I do. She takes her time, recounting the narrative in the chapel, which doesn’t follow a logical top-down path, pointing out how naturalistic details help communicate the narrative with wonder and enthusiasm. She’s got it all in her head – names, dates and difficult sequences of information that she presents as part of the story, making it interesting even for those who know this place well.

If you want to do the fresco workshop or any other tour with Alexandra Lawrence:

Look on The Florentine for upcoming dates of So you think you know Florence?
Contact Alexandra a.lawrence@theflorentine.net, tel +39/3338689458

The next fresco workshop is scheduled for Feb 22 2014.