How to paint a fresco (the Renaissance way)

While you’re in Florence (or in any other Italian city, for that matter) you’re going to see a lot of frescoes (a special technique of wall painting). Have you ever wondered how they were made, and why they still look so good? This article details how frescoes were painted in the Renaissance. 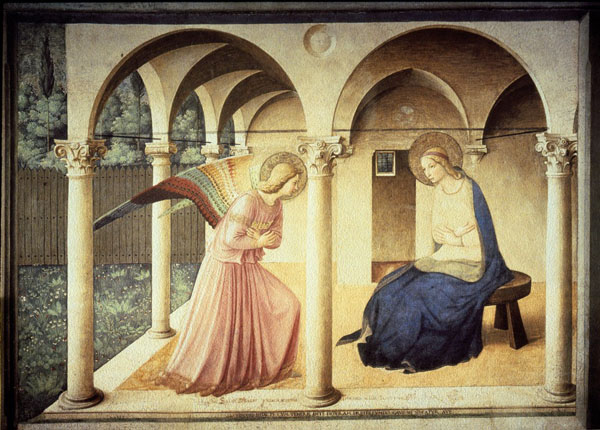 Fresco was used in the Ancient world but fell out of favour in the Middle Ages, when they tended to use more mosaic. It came back around 1300 as it was the best form of painting for monumental architecture, much of which was being built at this time (especially in Florence). It could be done quickly and quite cheaply, it could cover vast surfaces AND it is relatively permanent.

FRESCO (affresco in italian) means WET. The paint is applied to wet plaster. This term thus should not be applied to just any wall painting. Some parts of the fresco are applied A SECCO, which means DRY. Frescos are mostly permanent because of their chemical composition:
1) The active ingredient in fresco is LIME PASTE, which is produced by heating CALCIUM CARBONATE with limestone.
2) LIME PASTE + AIR changes back into calcium carbonate, hard crust (carbonatation). If pigment is applied to this when wet, it becomes trapped into the wall and is fairly permanent because it is very chemically stable.

How to paint a fresco

Cennino Cennini, who wrote an artists handbook around 1400, describes exactly how frescoes were made at his time, which I sum up here..

STEP 1: scaffolding. In small space like chapels, scaffolding is built across space, with wooden poles stuck into the walls. These parts are then filled in; if you see square holes in the wall, chances are this is a place where the scaffolding has been, and some plaster has fallen out.

STEP 2: prepare the wall. You’re going to apply plaster to the wall and you want it to stick, so you rough up the surface with a small pick-axe.

STEP 3: ARRICCIO
Arriccio is a layer of rough plaster made of a mixture of lime paste and large granules of sand. You smear it onto the wall and let that dry overnight.

STEP 4: MAP OUT THE DRAWING
The 14th century artist would sketch out the major outlines of his painting with a reddish-brown paint directly onto the arriccio. This part is called the SINOPIA, an underlayer of the fresco that can sometimes be uncovered through restoration and is sometimes displayed in museums. Sometimes you may actually see sinopia on walls where the top layer of the fresco has been ruined. This preparatory drawing in sinopia is a handy guide for the artist and also a way to show patron what he’ll be getting. Later in the 15th century, the practise of direct sinopia painting was used less often. As drawing became more important in the practise of the visual arts, many artists made a series of preparatory designs culminating in a CARTOON, a life-size drawing on paper. They pricked the cartoon with a needle and held it up to the arriccio; this page was then “pounced” with a sack of carbon so that a black outline was made. There were other ways to transfer drawings and to keep them in mind during the process, though these are the two most popular.

STEP 5: INTONACO
The day to paint has arrived. Obviously it’s not all done at once – each day’s work is called a GIORNATA. This corresponds to a plaster patch that is the amount of work the artist could do in one day. You prepare your intonaco plaster, which is made of the same lime and sand as the first layer, but the sand is a finer grain and there is more lime. This mixture is then spread onto the space you intend to work on that day. Interestingly, this covers up the underpainting (or charcoal outline), which the artist had to keep in his mind! If you look closely, sometimes you can see the giornata divisions in a fresco; these were applied judiciously to try to hide the lines but are usually around major shapes.

STEP 6: PAINT
The paint is applied directly to the plaster while it is wet, which is only a 2-4 hour window of opportunity, after which the plaster starts to dry and it gets very difficult to paint. You work from the top down (because the paint drips!) and try to do large areas like sky all at once because it’s very difficult to match colours the next day. This process is very difficult because once you apply the paint, it’s there and you can’t make mistakes. In fact, paint layers are thin to transparent, so the pigment was added in layers. Colours could also be mixed by doing this.

STEP 7: A SECCO
Finishing touches were applied after it all dried and tend to be less permanent and fall off with time. Blue pigment was applied often over red underpainting, while gold leaf was applied last, being stuck on with fish glue. Sometimes the finest details in faces and other sections were done a secco. This means that if you see a red sky or a face with no detail, chances are you are looking at a fresco that has lost its a secco treatment.

The preservation of frescoes

Because of their chemical composition, frescoes are permanent unless they are affected by damaging outside forces. The main one is sulfur, which turns limestone and marble into dust. Sulfur attacks frescoes through air pollution and water. Water also causes blistering and mold. Of course, the ravages of time can also be damaging. The fashions of later centuries meant that often perfectly good frescoes that we would admire today were overpainted or simply white-washed! Vasari did this to Giotto’s frescoes in Santa Croce, which is why they are not in great condition now. Bombings, in Italy mostly from WWII, caused serious damage in other areas, as did the flood of 1966.

Fresco required great skill and speed. The process required artists to plan ahead, to think of space as subdivided into sections, and to think of design in terms of strong shapes. This leads to a new appreciation, especially in early Renaissance Florence, of the monumental, of powerful and large forms.