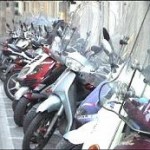 Florence’s mayor Renzi unveiled a plan last week to increase the cost of parking downtown and in the peripheral areas of the city. Increases range from 50% to 300%. And in a surprising move, motorini (scooters, vespa’s) will pay 50 cents an hour to occupy a precious slice of asphalt. The car parking price is a much-needed tax for the city’s coffers, and compared to other cities in which I’ve lived, even 3 euros an hour is low (in Chicago 10 years ago the parking below my condo was $8.50 per half hour).

Now, I don’t drive a motorino (I’m too scared, though I accept rides from my husband) but often it’s the only direct way to reach downtown if one has to go shopping or do business. And reading this news, I felt I had to comment – so here’s my summary, the problems I see, and the solutions that I think should be put in place before making a move like this.

It makes me sad when Renzi, whom I support, makes these moves without thinking them through first, because people, especially Florentines, are quick to criticise. And even I am starting to lose patience. Remember a year ago when the new government made the area around Florence Duomo pedestrian-only? The bus system got messed up but I advised patience; we were promised a system of electric busses that would resolve our needs to reach places between San Marco and the Stazione. Now I work above Piazza San Marco and I can tell you that if I want to go shopping near the Duomo, the only way to get there is to walk. Which is okay for someone fit who wants to stroll, but what of the elderly? The handicapped? The hurried? The simply tired?

It seems to me that this move, like the last, hasn’t been properly planned. Increasing parking fees encourages the use of public transport or bicycles. Which I already do. But neither service is sufficient in Florence. The busses are packed to the gills and there are few bike paths. Shouldn’t they first make these services viable, then tax those that do not choose to use them? 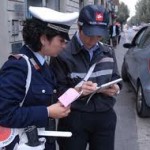 Second, there is a practical problem with making scooters pay for parking and display a paper ticket (other than the expense of installing the new distributors). In force only in one area of Florence so far, one wonders where to put the little paper ticket so that it doesn’t fly away. But more importantly, the sly average Italian is all too likely to steal someone else’s paid parking stub in order to avoid paying for it himself. Doubt me? Recently my husband parked his vespa downtown and found a parking ticket attached to the windsheild soon after. While getting ready to pay, he noticed that it was made out to another license-plate for an infraction he didn’t commit! Someone received a fine and transfered it to the next guy over, hoped he’d not notice and pay their fine. Furbacchioni!!

So, Mr. Renzi, here are three solutions you could implement in the city before encouraging us to take public transportation, some inspired by one of our seemingly least-advanced European neighbours: France.

1) Bus + Bike: An electronic commuter bike system like Vélib‘ in Paris. Between points no more than 300 meters away, users with an electronic pass can take and leave bikes at any station, conveniently and cheaply moving around the city – even between points not served by the bus (yearly subscription: 29 euros, 30 minutes use free). Sure, Florence has commuter bikes, but it’s cumbersome, infrequent, requires human contact, and not open 24/7. Handy, environmental, and you don’t risk getting your own bike stolen (around here, how long does your average bike last? a few months?). 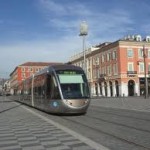 2) Electric automated transport between Duomo and San Marco (like the ones between terminals in airports like Chicago). In Nice, their main shopping street is pedestrian but there is a free shuttle on tracks (a streetcar with rubber wheels, very silent) that goes back and forth every 2 minutes. That’s exactly what we need. When I get off the bus at San Marco, I want a connection waiting for me. That goes directly where I want to go – not around the whole damn city like the infrequent C3.

3) Decent busses, drivers, and schedules. I’ve lived in a lot of places and never have I experienced such a lame bus system (well, maybe Rome, but despite the crowds, it works well)! Remember with ATAF’s reduced summer schedule it took me 1.5 hours to get to work in a distance that took 12 minutes on the Vespa? And that was without traffic, such that speeding buses hit the gigantic potholes with gusto and laid on brakes at intersections such that I swear, one week on two occasions old people were tossed from their seats. I kid not. When the new bus was unveiled, the drivers weren’t given training, such that they didn’t know how to turn on the a/c. And while they bounce less, some joyfully slam on the brakes anyway. Maybe driver training would be wise. And not to speak of the schedule. Why is it that the busses are always packed to the gills? If it’s so full we can barely fit inside, maybe there should be more buses.