3 Florence artisans 5 minutes away from the Duomo

One indicator of the quality and liveliness of a city is the presence of productive activity. If there are people who actually make things, physical things as well as virtual work, in a historic center, you’re in good shape. Florence has always been known for its artisans, and although many have been driven away from the center by high rent, a good number do continue to thrive, and others are starting up new businesses.

The Oltrarno area is certainly the area with the highest concentration of artisans, and a great place to go if you want to stumble into a workshop and buy some handcrafted souvenirs. Often overlooked is the area right near Florence’s Duomo. I work not far from here, right near piazza Santa Maria Novella, and I’ve never really noticed that there are active artisans just a few minutes away. It took the Saper Fare: Artisan Traditions of Florence walk [no longer available] from Context Travel to introduce me to these masters in Florence’s most touristy neighbourhood. 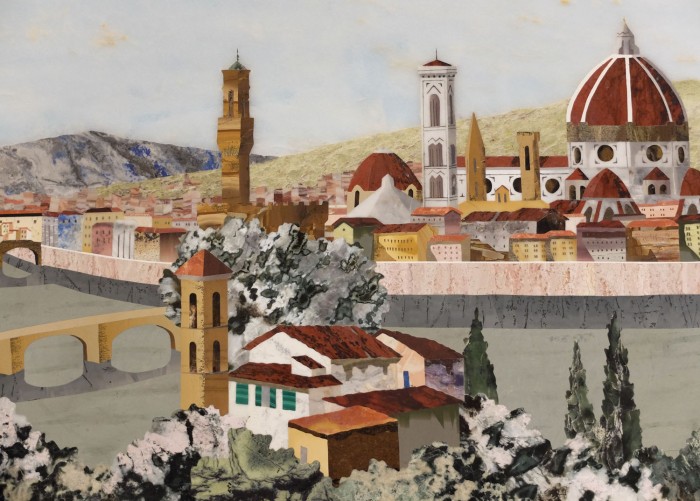 Look closely, this Duomo is made of marble inlay!

Within spitting distance of the Duomo, on the road that leads to the Accademia (via Ricasoli), I’ve literally never noticed Scarpelli Mosaici, a large store with an active workshop that produces art made of stones. This inlaid marble work is called commesso or pietre dure – you may have heard of the Opificio delle Pietre Dure, which is just around the corner and which carried out works in this technique for centuries under Medici command. Here, we met Catia Scarpelli, whose father Renzo founded the business in 1972. Renzo himself was intently concentrating on a masterful marble composition and managed not to be distracted by us, which is admirable in itself! Catia says that being able to do this art is a gift, one that her father and her brother Leonardo have (the latter perhaps due to his name) but that she just isn’t good at it. 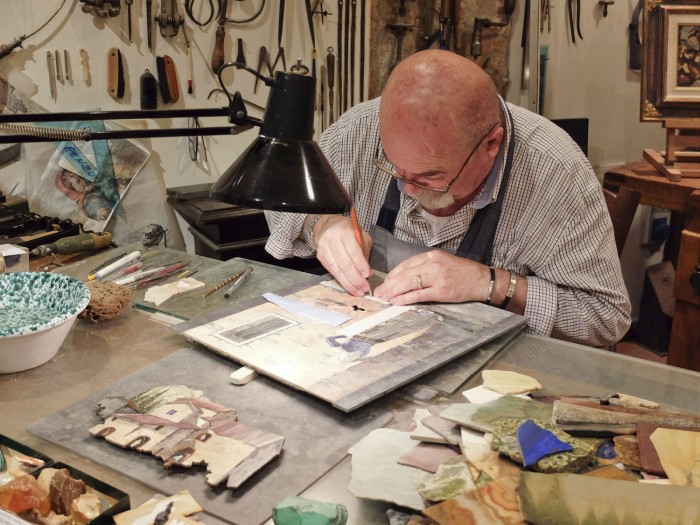 If you look at it from a distance, small scale commesso work can approximate a painting, and it’s easy to miss the amount of painstaking work that goes into making it. The process starts with selecting the right stones, which takes a knowledge of geology and the secret places to get these materials. Renzo gathers his own in the Tuscan hills, but certain colours and patterns of stones are only available in other parts of the world. The workshop stocks up on pieces of all the types of stone they can get in order to have them on hand when making a design. 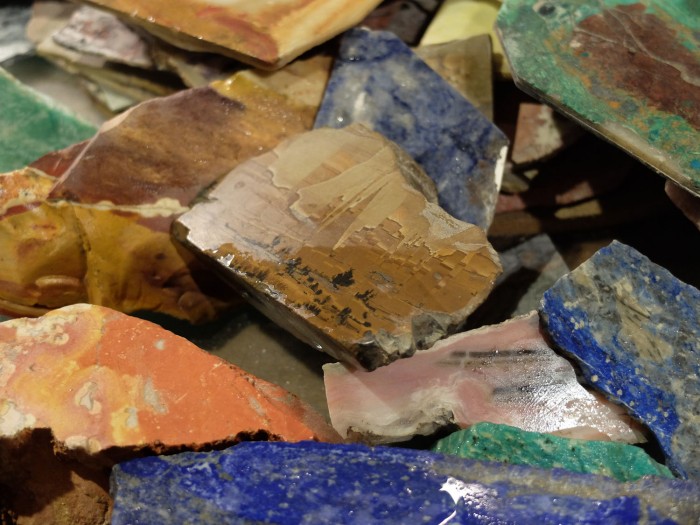 Close up of stones

The final work of art will be based on a cartoon, which is made of outlines that delineate the major colour blocks and shadows. These are then divided up into smaller sections, and a mask is used to transfer these sections to the stone of choice. The stone is mounted onto a slate support for thickness, and then cut by hand using the same tools of centuries ago – an iron string mounted on an arc and abrasive paste to work through the hard stone. The cut is made on an angle, and then refined until it fits the composition. 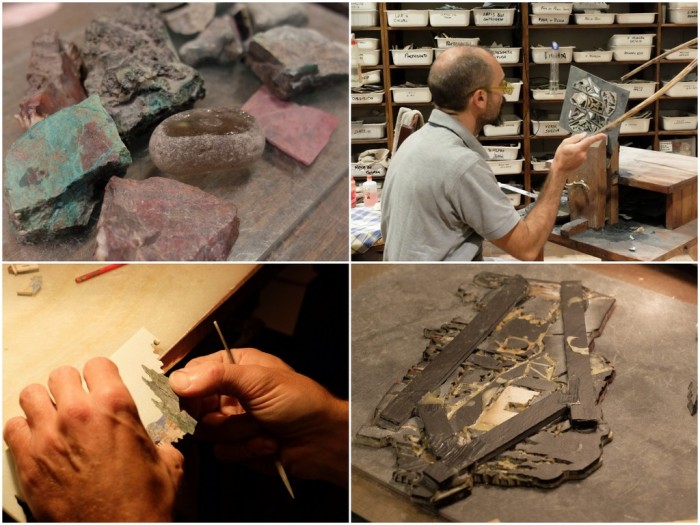 Leonardo cutting and fitting a stone

Scarpelli has made the choice of setting up the workshop at the back of a large and luminous space because they are dedicated to passing on the technique, through teaching, and awareness of their work through direct contact with the public. They sell small works (in the €250 range) up to very large “marble paintings” and of course also work on commission for murals or tables. Renzo’s style is classic, while Leonardo enjoys replicating modern art.

See it in the wild: Probably the most impressive example of commesso technique in Florence is at the Medici Chapels, in particular the Cappella dei Principi, which is so very inlaid with marble that it took almost three centuries to complete it. Floors, walls, altars are all decorated in marble. For an idea of the smaller scale works – tables, furniture and wall art – made for wealthy Florentines over the centuries, see the museum of the Opificio delle Pietre Dure.

Deek around a corner from the Duomo, going towards San Lorenzo, and you can easily miss the small storefront of Paolo Penko Bottega Orafa, a prestigious jeweler who counts the Pope, Madonna (the pop star not the one the Pope prays to), Sofia Loren and it-girl Paris Hilton amongst his clients. Lovers of shiny things will be excited, but Penko goes well beyond traditional jewels, as we would learn in our exclusive visit with Context Travel. 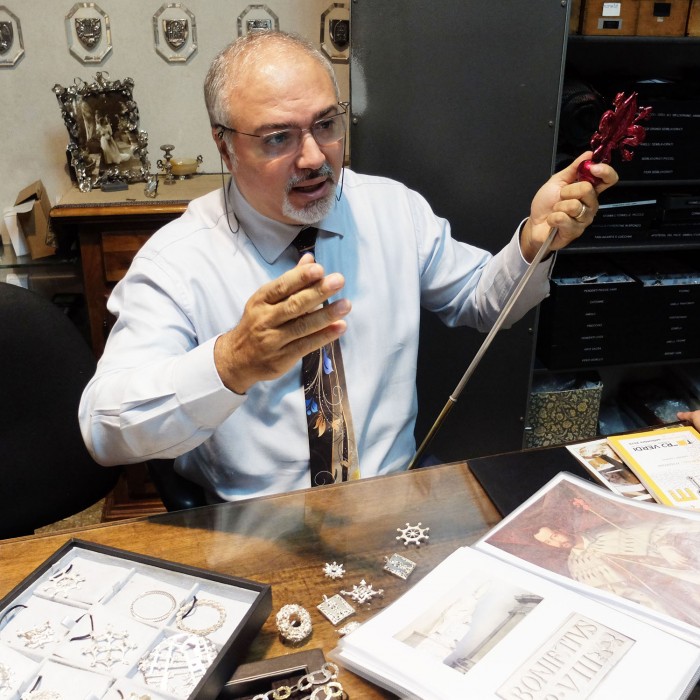 The tiny shop is where Paolo Penko has been working since 1980, now with the assistance of his son, though his grandfather purveyed related goods in the same building before him. Paolo says he was one of the first artisans to move down to street level and put his workshop in the window, something that is now a trend once again. In the window there are examples of two of the store’s most traditional types of jewelry – hammered metal loop necklaces using a technique called cesellazione, and the ornate 2-colour gold rings (primarily) done in the traforo e incisione a bulino technique that I have always admired. This latter starts with a flat sheet of metal that is punctured and incised with a bulino which is the tool used to incise plates in printmaking (in fact, the first printmakers were goldsmiths). 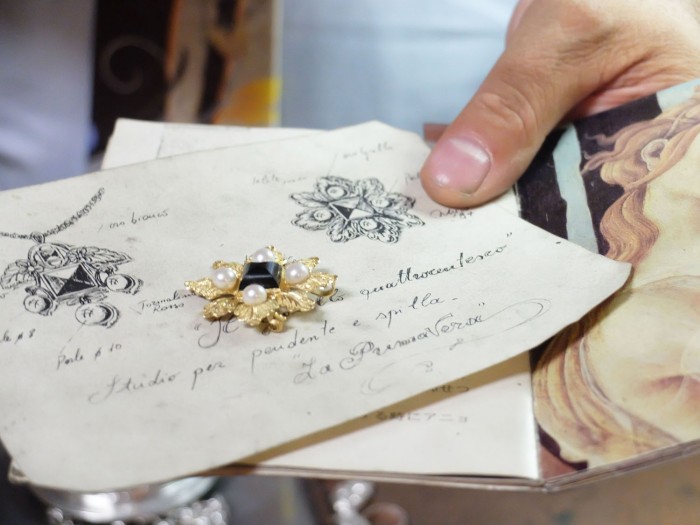 Pendant based on Botticelli’s Primavera

The connections between fine art and jewelry go back, in fact, to the Renaissance, and Paolo is working on bringing it back. Many of the great painters of the Quattrocento were goldsmiths first, and a prime example is Botticelli. Paolo has combed Florence’s museums and buildings for inspiration to make pendants, brooches and more. He shows us the different phases required to make his Primavera pendant (worn by one of the three graces in Botticelli’s painting), with gems and pearls, that takes four days of work. 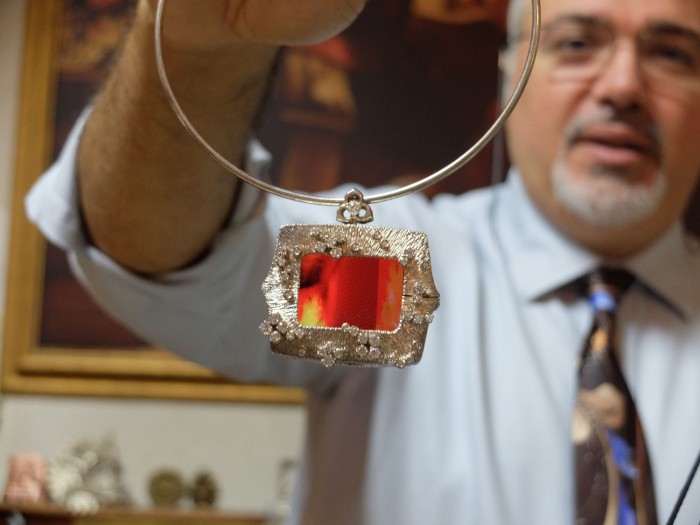 But he also is proud of his innovative, youthful side – he was cited by Vogue Jewelry as the most innovative jeweler for his video art pendant, a custom made piece with a 30-60 second video loop (that he creates). Not a one-off, it’s quite in demand! 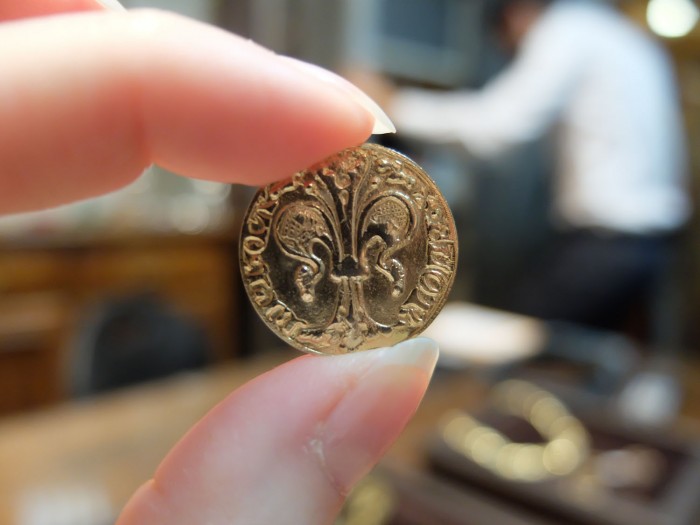 Paolo is also involved in perpetrating knowledge of his art amongst the city’s youngest. He regularly has visits from school children who he educates about the florin, the gold currency that was once Europe’s strongest trade value; Paolo makes gold florins in his shop, as they are a traditional birth gift. My friend David Battistella has made a short film with Paolo about this.

HAND MADE MONEY from David Battistella on Vimeo.

See it in the wild: If you’re fascinated by jewelry and ecclesiastical treasures, you’ll want to go to the Museo dei Argenti in Palazzo Pitti. 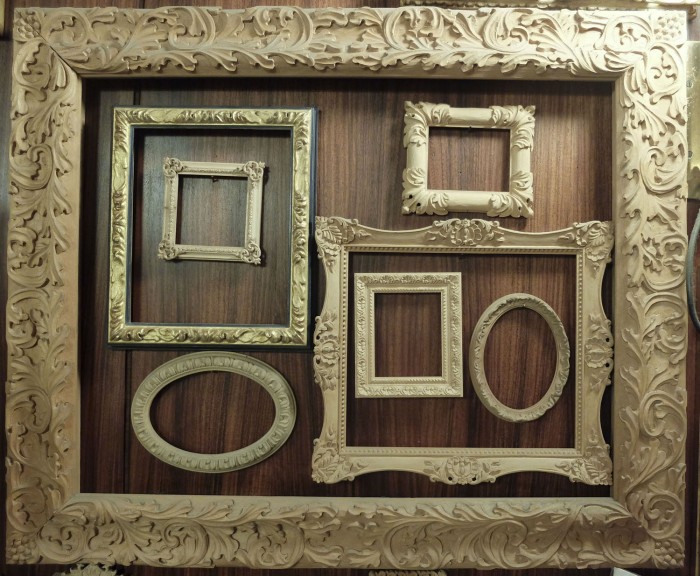 What looks like a standard frame shop on via de’ Ginori gives way to the workshop of Gabriele Maselli, whose most important recent commission was the frame for a 6 x 2.5 meter frame for a Last Supper painting that resides behind the main altar of Florence’s Duomo. Suitably impressed, we headed inside to learn more. A first room is lined with wood paneling topped with back to back frames that would suffice as art in themselves. We are admitted to his workshop, slipping in behind the counter and passing through a connecting room whose walls are lined with family photos, a weird backwards clock and a wall of pigments, all watched over by a large dog named Otto. 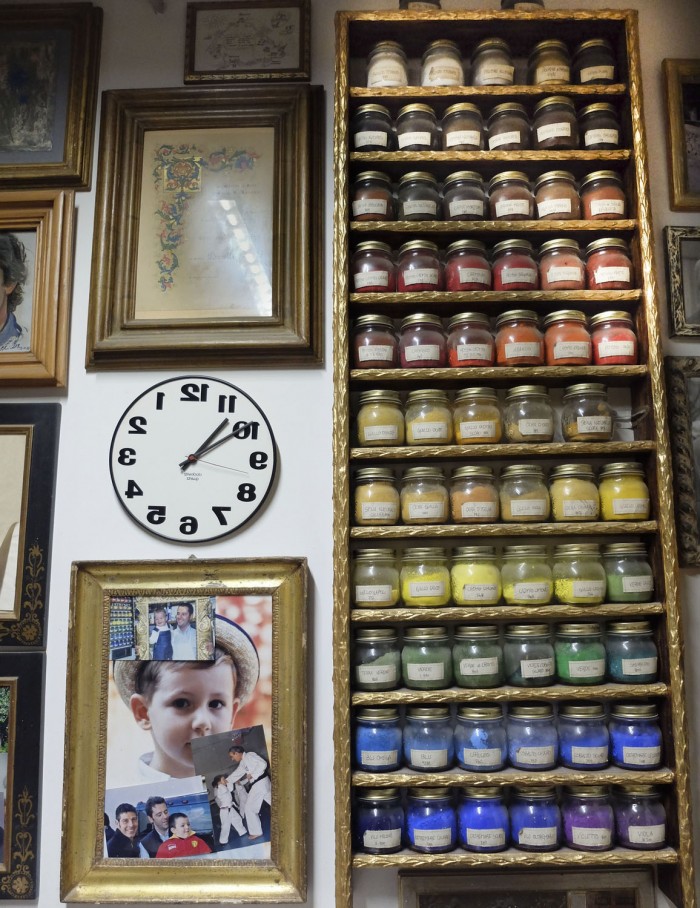 Gabriele is an extremely humble man who knows his mestiere well. He’s one of the few frame makers in the city capable of restoring centuries-old frames as well as making modern replicas. He shows us an antique frame made of painted gesso that a client had brought in for restoration. He took the challenging of replicating it in carved wood, and we set them next to each other for comparison. The new wood frame had just been covered in gold leaf, and he demonstrated how this is done. The wood carving is prepared with a layer of white gesso (basically primer paint) and then a red bolle which is basically clay. This second layer, when wet, is what makes the gold leaf stick, and the colour also makes a good base. The technique for applying the gold leaf is extremely finicky, not to mention expensive, and Gabriele gives us a demonstration. 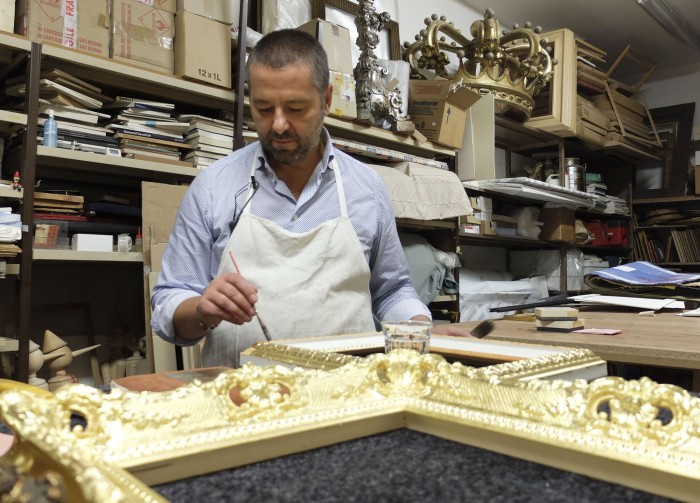 On a larger scale, as I mentioned, Gabriele has had the honour of working for some of the city’s most important historic patrons, like the Opera del Duomo. He also restored the frame of a large Rosso Fiorentino painting that was in the recent Pontormo and Rosso exhibit at Palazzo Strozzi, the San Lorenzo Sposalizio della Vergine. A man of immense experience, handed down from his father, one thing I really appreciate about him is his attention to new methods of communication. A young 50, he’s brilliant on Facebook and also posts fascinating videos of his work. Totally worth becoming a fan.