For some 50 days, Florence was sleeping, and she was having bad dreams. Streets designed to play host to thousands of people were empty and eerily quiet, the tension palpable. Or that’s what I understand from the photos I saw: I myself wasn’t there.

I live in Florence, but out in the suburbs. From inside my home, my daily view is not medieval marbles but a post-war apartment block glimpsed from between ground-floor bars on the window. During lockdown, I went as far as the trash containers, twice.

I missed Florence, I missed its green hills, so near to us on this side of the city and yet so far. I missed the architecture that is contemporaneously astonishing and yet at a scale that we can somehow comprehend, I missed the gestures between acquaintances on the street. In some ways I even missed the casino of downtown, the tourists who get in my way and who make me feel just slightly superior because I live here, I know this place, and you’re just temporarily visiting. 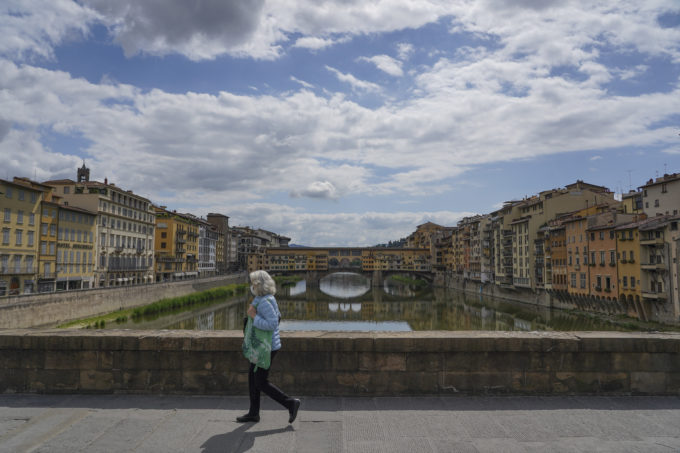 A woman walking on ponte Santa Trinità, with a view of Ponte Vecchio

Today I finally went out, an intrepid, masked urban hiker. Like many Florentines, I went to reclaim my city.

May 4th marked the start of “phase 2” for Italians, a gradual and very slight loosening of the strict stay-at-home legislation put into place on March 9 to keep us as safe as possible from Coronavirus. The most exciting concession – allowed to Tuscans from May 1st – is that we are now allowed to take walks, or more specifically, we’re permitted “outdoor physical activity.” (Being out still must be justified with a self-declaration form indicating, in case of a police check, that we are carrying out permitted activities, which have now widened to include visiting relatives.)

I didn’t go downtown on that first day, opting for the less crowded green areas near my home. But today I decided it was time to do so, to see how Florence is doing… to take her temperature, if you will. I wasn’t sure what I would find, but I knew I had to do it now.

I found myself reflecting upon my first trip alone to Florence, a summer study program in 1997, and how I felt instantly at home then. It was like a 20th anniversary commitment ceremony. I found the Florence that I love, clean and shiny in the sunshine. Quieter than before, but determined. Not in a grim way, but in the sense of resilience, of looking forward to moving beyond this moment. The phrase “Healing, not Broken” is how my colleague Helen at The Florentine defined the city already last month, anticipating the feeling in centro this week. 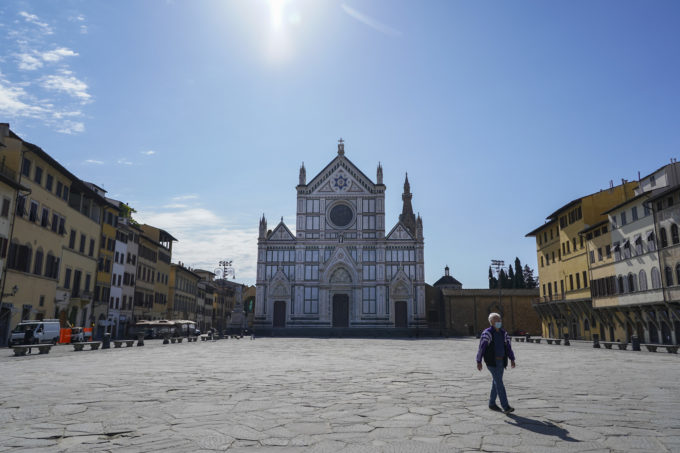 Coming from the city’s south on foot, along the Arno, I arrive at the Biblioteca Nazionale and head into the Santa Croce area. Without the traffic, you can actually hear the water from here, especially the flow from the recently renovated Poggi fountains. Water was this area’s raison-d’etre in the Middle Ages, the irregular streets leading to waterfront access for the production, dyeing and finishing of wool. I walked into piazza Santa Croce just as the sun was just peeking over the basilica’s façade that shaded the graceful piazza, its stone benches occupied by single dog-walkers and observers. 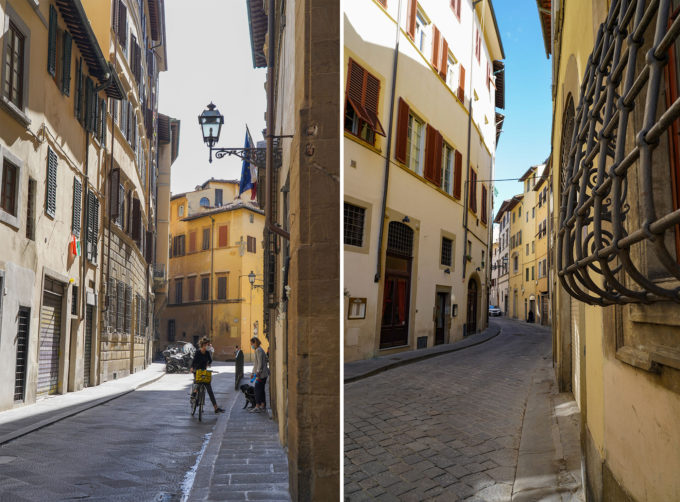 If you’ve ever been in the centro storico at 8am, that’s the closest comparison I can make. You get delivery trucks circulating, people rolling up the shutters, acquaintances pausing mid-street to exchange pleasantries, and the sounds of screeching birds on summer mornings. 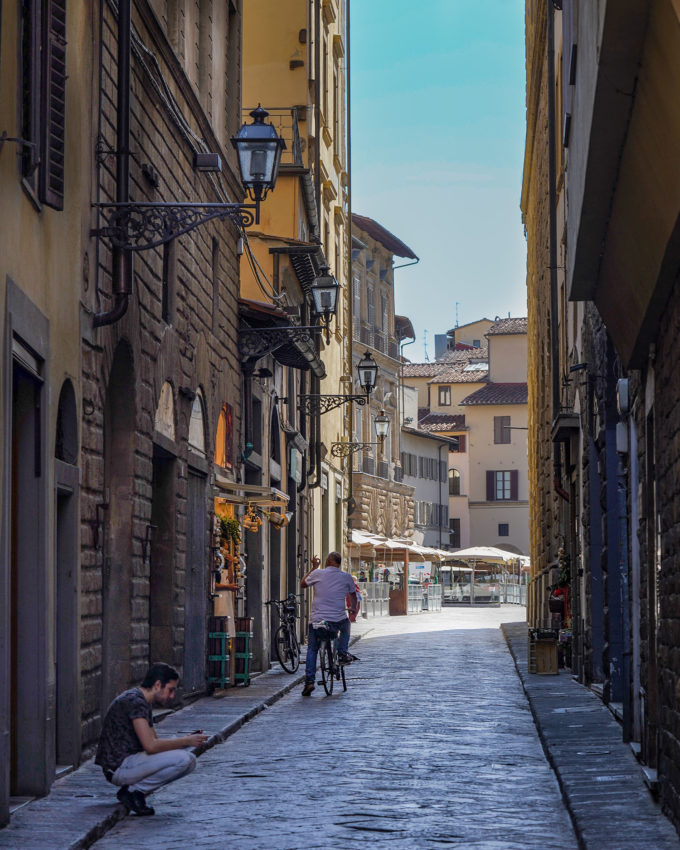 Without the crowds, human interaction, even in its currently embryonic state, has room to shine. People peek out of doorways to chat with friends perched on bicycles, gesticulate from windows down to street level. In masked interlocuters, the body language says it all: “how have you been?”, “I’m so happy to see you,” “we’ll get through this together.” There is an intimacy in these gestures that is easily lost in a large city. That charming feeling you get in small-town Italy? It’s happening in Florence right now. 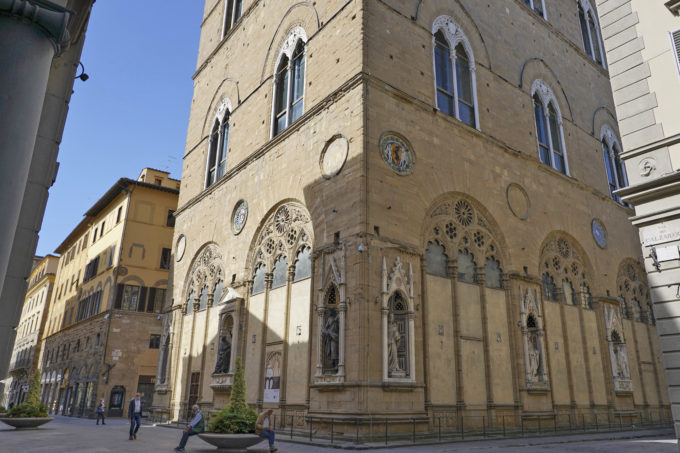 Men sit on benches near Orsanmichele

I have rarely strolled down via Calzaiuoli without feeling agitated by the crowds, or pressed for time as I’m rushing to a shop on my lunch hour. I’m sure that I’m not the only person today who noticed the street’s majestic architecture. The planter-benches that last year hosted exhausted tourists while their companions mulled about in the shops are suddenly ideal seats for the old men, newspapers tucked under their arms, who observe the world around them. 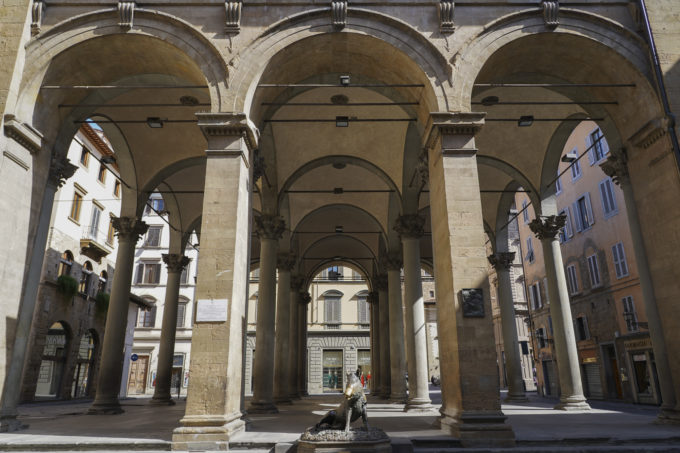 The porcellino’s bronze snout, rubbed shiny by pre-coronavirus travellers hoping the gesture would guarantee their return, gleams against the backdrop of his loggia. This space was always intended as a market; there’s something heretical about it being empty, but what an opportunity to admire its graceful architecture! 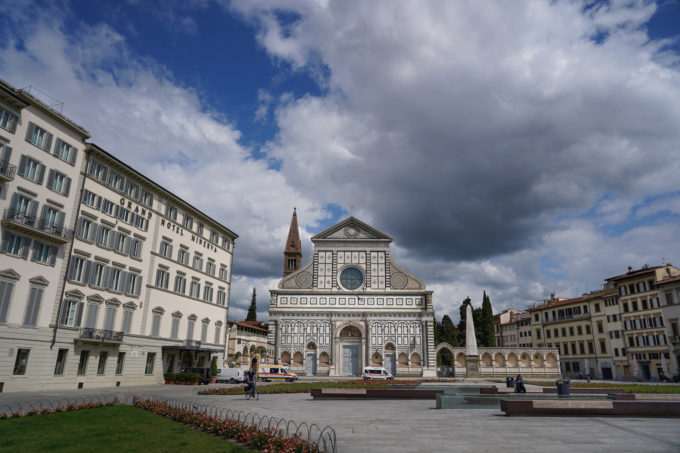 You can smell the pink roses of Santa Maria Novella before you can see them, now that the air isn’t full of acrid exhaust. No picnicking school groups sit on the benches, to the chagrin of the pigeons, who are wondering where their feast has gone. 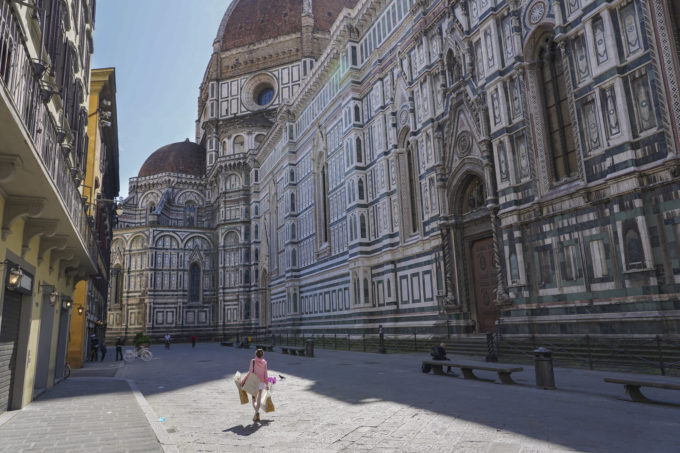 A woman carries her shopping past the Duomo

Piazza Duomo was, for me, the greatest revelation. It’s not that I didn’t appreciate it before, didn’t frequently wonder at its miraculous massiveness and how it must have appeared to 15th-century Florentines. I guess crowds of people at its base change that, for I most appreciate it at night, when things are quiet. What’s changed now is my own openness to seeing it. I haven’t found myself with much less work during lockdown, I’m one of the lucky ones, but I’ve tried to make more time for myself. I’ve learned to rush less, to be more precise with my actions, more specific with my words. Now I’m outside again, and I want to preserve this newly acquired skill. 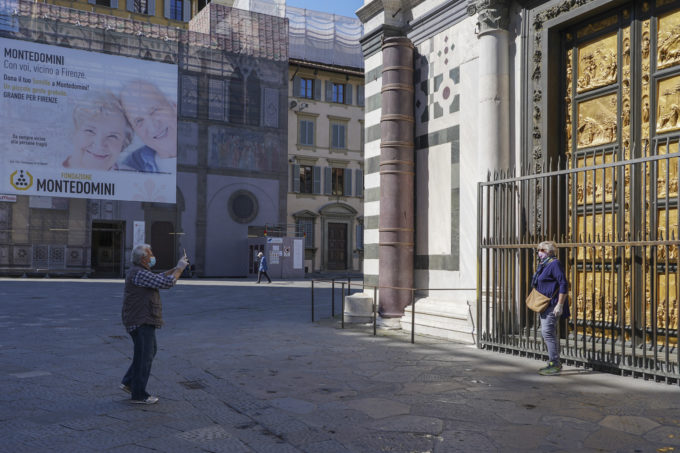 I know we can’t live on locals “being tourists in their own city,” but I witnessed the pleasure that Florentines are taking in reclaiming this space for themselves. Almost everyone was taking photos, and while not strictly “physical exercise” as permitted, the military didn’t seem to care. A mother showed her toddler the big buildings and tried to get him to stay still long enough for a snapshot. An elderly couple snapped photos of each other with the gates of Paradise. 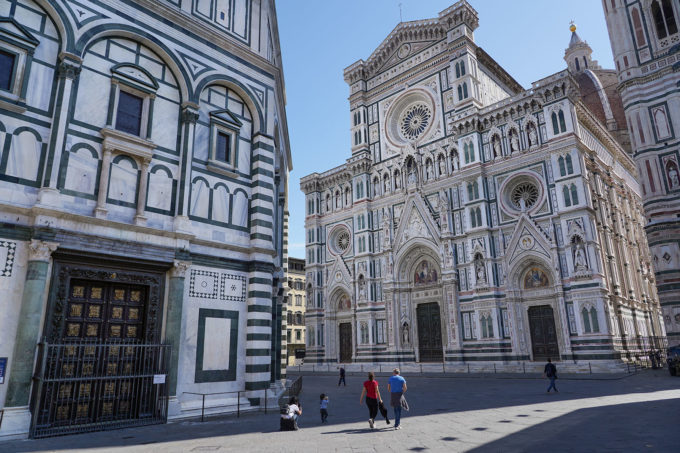 A funny little vehicle, one of those things that is almost a golf cart and that they give teenagers before they can get a proper license, drove into the piazza at a determined speed, turned left, and stopped, very purposefully, perpendicular to the central door. The door from which Brunelleschi is said to have carried out his famous experiment on perspective with an accurate drawing of the Romanesque Baptistery. Where no car has parked since the 1960s. A slight woman stepped out and closed the door. She stood there and stared intently upwards at the Cathedral. For her, this was the best and only position from which to fully absorb it. Perhaps two minutes went by, and then she performed the sign of the cross, entered her chariot, and drove off. 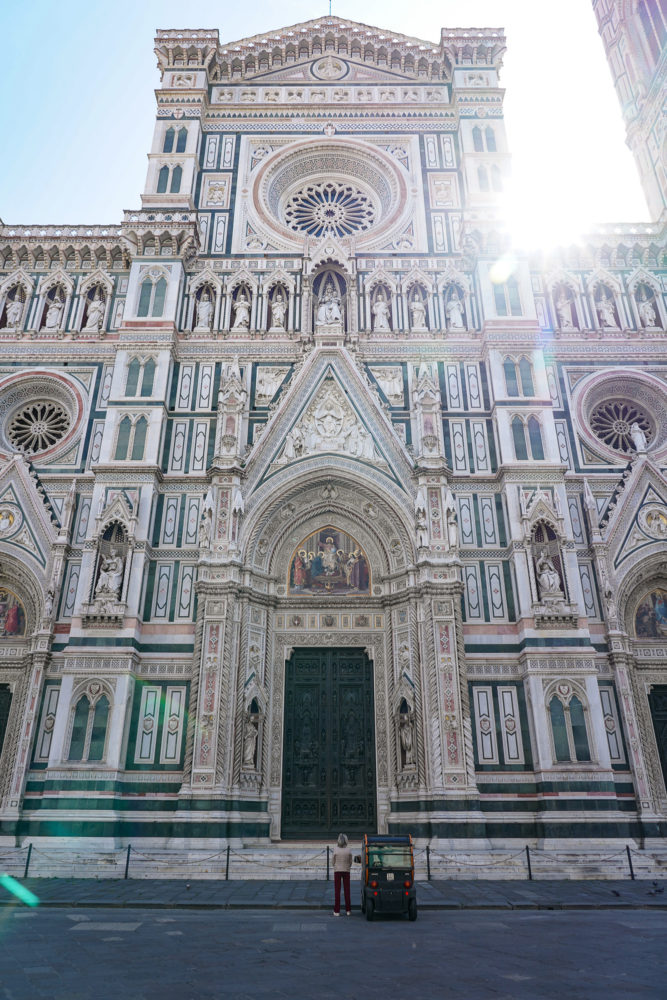 A hipster whose beard was trying to escape from under his mask stood with his back to the Baptistery. He observed the façade, the Belltower, alternatingly picking up his phone to try to capture the scene and, perhaps, giving up because it’s too grand, because his photo couldn’t capture what he was feeling.

Like me, he wasn’t in a hurry. There’s finally time to stop and really look at the gift that is this city, to give ourselves over to the experience without worrying about the crowds closing in, the pickpockets, the clock ticking before our next appointment. 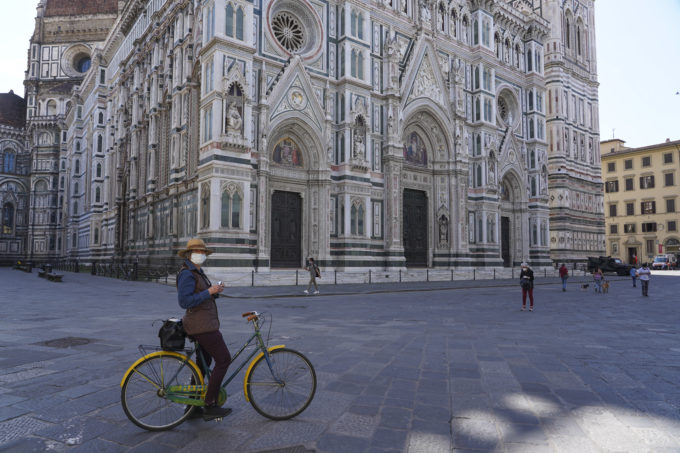 Can you help me?

A woman on a bicycle held a camera out to me and asked if I could help her make it work – her husband had put in a fresh roll of film (un rullino, she said!) this morning but she didn’t know how to turn it on. Mi dispiace, I said, we’re not supposed to touch. I smiled with my eyes and turned away.