The Medici invented gelato, too?!

Judy, aka Divina Cucina, is an authority on all things edible. She’s run the best cooking school in Florence for many years, and now has written a fabulous new cookbook of 93 Tuscan- Husband-approved recipes. She has permitted me to reprint two articles she’s written about GELATO from her two websites (the blog and the official site), which seems timely right now as temps are pushing upwards of the 30 degrees celcius mark. I love Diva’s fascinating article on the history of gelato.

From Diva’s Summer 2003 newsletter: “I scream, U scream, we all scream for gelato!”

The record breaking summer heat has had us all seeking refuge in the gelaterias! What a choice we have here in Florence! Besides the classically wonderful gelato that everyone knows and loves, there are also other gelateria specialties such as semifreddos, sorbetti, frappes, and granitas.

The original sharbat, a refreshing iced lemon dessert introduced to Italy by the Arabs, was eventually turned into the Sicilian granita–sweetened citrus syrup poured over snow brought down from Mount Etna. Try the Sicilian coffee flavored granita with whipped cream on top and you have a cold cappuccino! My friend Antonio Lisciandro of Gelateria Carabé says that it is a Sicilian summer breakfast. Served with a warm brioche, for me it is fabulous anytime! 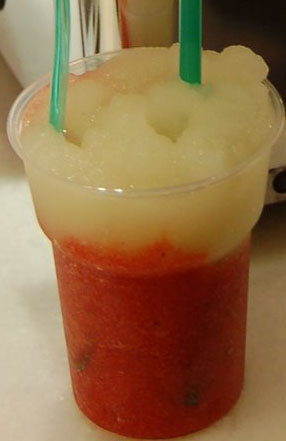 On the beaches of Italy, you will see the grattachecche, energetic fellows who makes sno-cones, also called granita, by shaving a huge block of ice and drizzling syrups, such as lemon, orange, tamarind, or mint, to be eaten with a spoon or sipped with a straw.

Florence claims the first ice cream. In 1565, Bernardo Buontalenti, the architect to the Royal Court of the Medici family, was hired to create fabulous events for the Florentine banquets, including stage constructions, theater events, fireworks, and food. For one of his creations, he decided to chill pastry cream in the special rooms created to keep ice transported from the glaciers in Abetone down the Florence and used to chill drinks.

When Catherine de’Medici moved to France after marrying Enrico, Duke of Orleans, in 1565, she brought her staff along to cook for her and her family. Among her chefs was Ruggeri, the first professional ice cream maker. A hundred years later, a Sicilian, Francesco Procopio de’Coltelli, opened the first coffee and ice cream shop in Paris called Le Procope.

A Venetian, Sartelli, opened a shop in London, and in Paris, Tortoni invented the ice cream sandwich! In New York it was an ice cream maker from Genova, Bosio, who opened the first shop in the 1600’s.

Small ice cream carts appeared selling ice cream on the streets, using glass dishes. But an Italian immigrant Italo Marchiony created a formed wafer and patented it in 1896. This way his clients could take their ice cream with them, and he wouldn’t have to wash the cups!

A few years later, at the St. Louis World’s Fair in 1904, an ice cream maker ran out of cups, and a Syrian pastry maker rolled some of his cookies to use as a cone, creating the pizzelle style cone.

Whatever season, ice cream is always fabulous. Enjoy it anytime, anywhere, and hopefully in Florence! 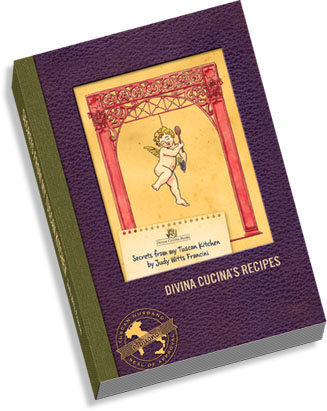 Below is Diva’s list of the best ice cream in Florence, but first a plug to buy her book Secrets of my Tuscan Kitchen, autographed and sent straight from the author (with no intermediaries… a sustainable production!!). You can buy direct from her website.

THE BIG QUESTION: what’s your favourite gelateria in Florence? Favourite flavour? Are there some places that excel in one type or flavour over another? Do you have a funny gelato story to share? Post it in the comments below!