I admit that the name Pietro Aretino is one I know mostly because he is the author of I Modi, licentious sonnets that he made when “inspired by” some prints for which his friend Marcantonio Raimondi was imprisoned. I first heard about this book – almost all copies of which were confiscated and burned – when visiting Palazzo Te in Mantova as an undergraduate study abroad student, and purchased a modern edition with facing Italian and English text (here’s an inexpensive Italian edition).

I remember thinking how wonderfully scandalous this book was, and in the context of the Saturnalian banquet scenes of Palazzo Te and the racy frescoes at Agostino Chigi’s palace in Rome, I realized that the Renaissance wasn’t all dull treatises, discussions of serious humanist topics, and religion. The world of Pietro Aretino, who could write dirty words just as easily as he could a hagiography of Saint Catherine, must have been an interesting one, and this is one of the reasons I proceeded to study Italian Renaissance art. Earlier this year, when I published my annual list of upcoming exhibits in Florence, I noted this one – Pietro Aretino and the Art of the Renaissance – as one I definitely wanted to see and review. This is a monographic temporary exhibition dedicated to Pietro Aretino, held at the Uffizi Gallery in Florence.

Who was Pietro Aretino?

Born in Arezzo in 1492, Pietro was the son of a cobbler about whose childhood little is known. Around 1507, he was sent to Perugia where he apparently trained as a painter, though the only product of this period is a volume of assorted writings. Through his lifetime, Pietro Aretino lived in Perugia, Rome, Mantova and Venice, and somehow, despite his humble origins, everywhere he went, he ended up hobnobbing with the top artists and patrons. One reference letter leads to another, I guess, for his patronage spanned popes, cardinals and dukes. Thus in Perugia he was in the circle of Perugino and Raphael, in Rome under the wing of Agostino Chigi, and in Venice, best friends with Titian and Sansovino, and specifically requested to be present for a meeting with no less than the Emperor. 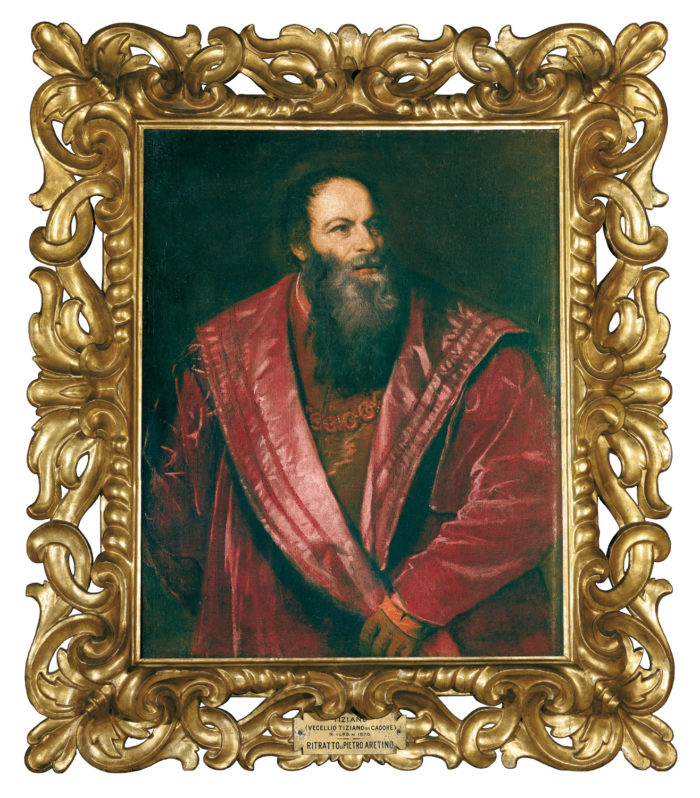 Aretino takes over the role of Bembo as the top literary man of the day; where Bembo was a humanist and Latinist, Aretino was more a “man of the people” and wrote in the vulgar language. What did he write? It’s hard to imagine writing – and publishing – as much and as widely as he did: from Petrarchian poetry to amorous letters, libel and satire, treatises and flattery, hagiography and pornography. Perhaps most importantly for our purposes, Aretino was the first art critic. He described works of art in published letters, and acted as an agent and promoter for his artist friends. He died suddenly in 1556; legend has it that the cause of death was laughing too much. Soon after his death, his entire corpus was placed on the papal Index of banned books – not because of the 4-letter words, actually, but because he’d offended too many people in high places. 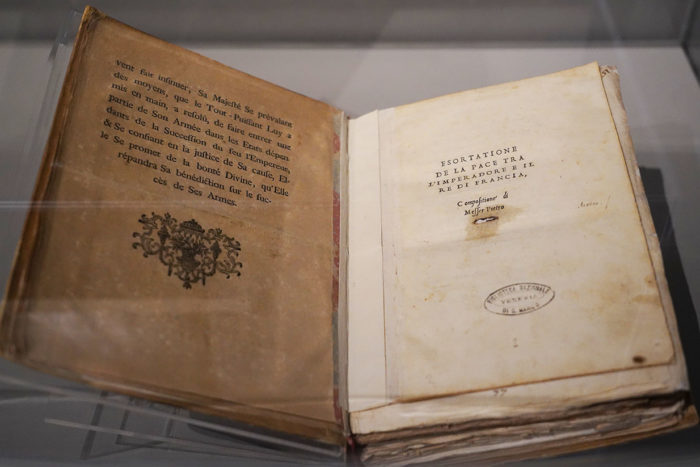 One of his more serious books

The exhibition dedicated to Pietro Aretino at the Uffizi wishes to demonstrate how important Aretino was to the cultural milieu of the first half of the 16th century, in particular the close link between art and literature. In this, the show comes on the heels of similar ones about poet Bembo (Padova, 2013) and publisher Aldo Manuzio (in Venice, 2016, reviewed on this blog). Connected to this, it serves to inform viewers that Aretino is much more than a “publisher of pornographic poems”. 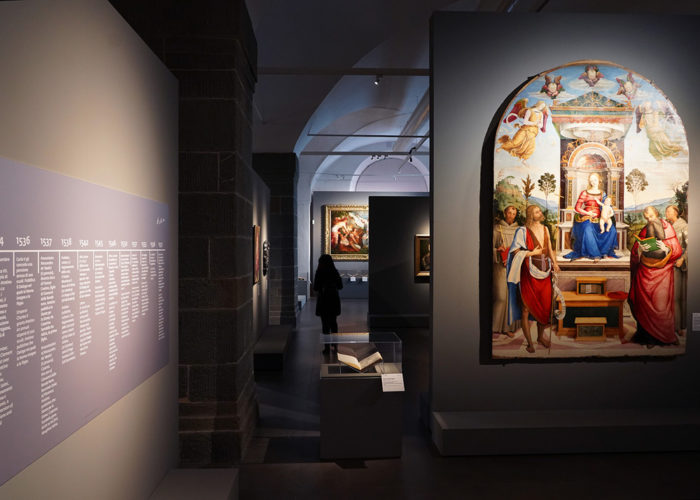 The opening section of the exhibition

The show develops through five sections; three dedicated to the artistic output in places he lived (Perugia, Rome, Venice), the central one to representations of the figure himself and the powerful men he knew, and a final one on Aretino’s sacred writings and related paintings.

The space of the Aula Magliabechiana isn’t very large, though I like its almost circular layout, and the architects have done a great job combining projections and dramatic lighting that unify the show. Small texts open each section, and my only complaint is that I would love to have more information about how each work relates to the theme. Perhaps an audioguide will be available for this (I went to the press preview, when they are still putting the finishing touches on the display), which would be the best solution since room for descriptions is really limited. Aretino’s texts are represented by books, but I’d have liked to see or hear some quotes from them around the show, too.

What you’ll see at the Aretino exhibit at the Uffizi

In no particular order, some of the works that stood out to me…

Raphael. Both in Perugia and again in Rome, Pietro Aretino was in the circle of Raphael, and the work chosen to represent the great artist is a Portrait of a Young Lady from Strasbourg that Shearman describes as being “borderline between Raphael and Giulio Romano.” 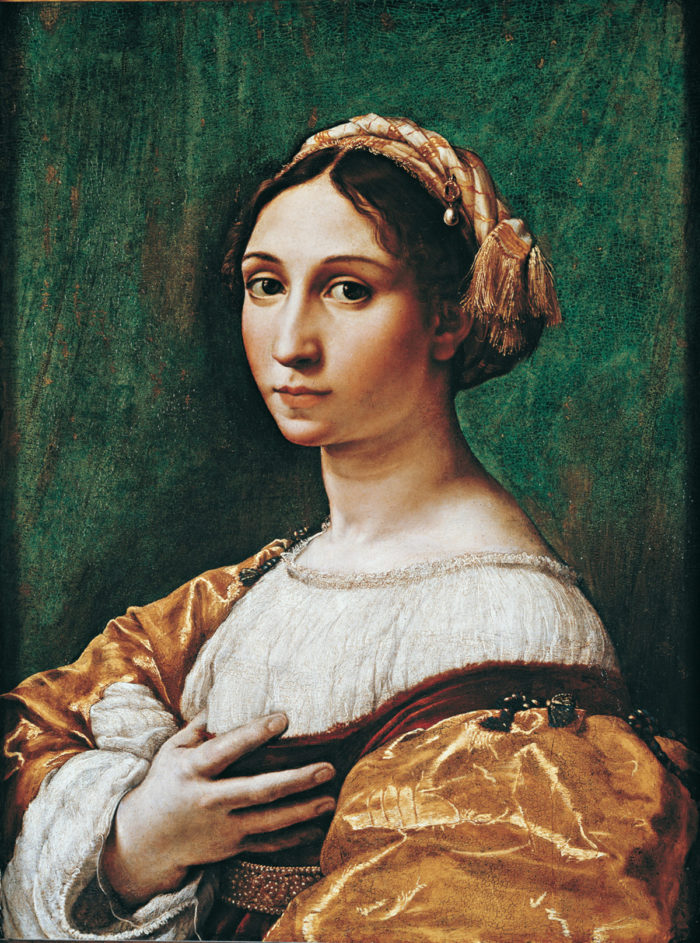 I modi. One of the few remaining later copies of the Sonetti lussuriosi is on display along with some related prints. 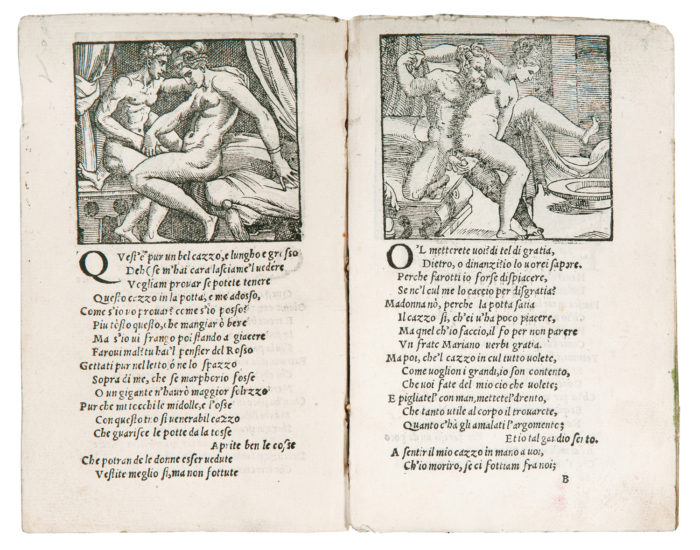 A page of the banned book of I Modi

Lorenzo Lotto. If there is a painting by Lotto in a show, it’s always going to get a mention from me, and so goes for his Portrait of a Woman with a drawing of Lucretia from the early 1530s on loan from the National Gallery of London. Two letters attest to a relationship between Lotto and Pietro Aretino and they certainly had friends in common. This painting comes from about the time the two would have met in Venice. 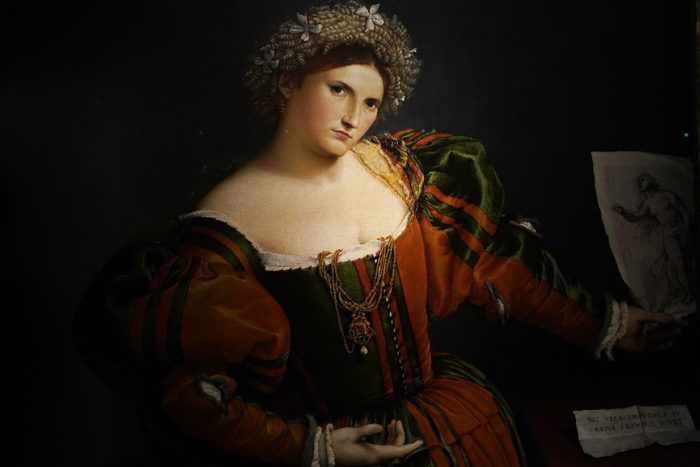 Lorenzo Lotto, Portait of a woman with drawing of Lucretia (detail, own photo)

Titian. Four works by Titian from the Uffizi galleries are present in the show, given the author and artist’s close relationship. The delicate Madonna of the Roses, his Mary Magdalen and the Ecce Homo, and the Palatine portrait of Aretino himself. 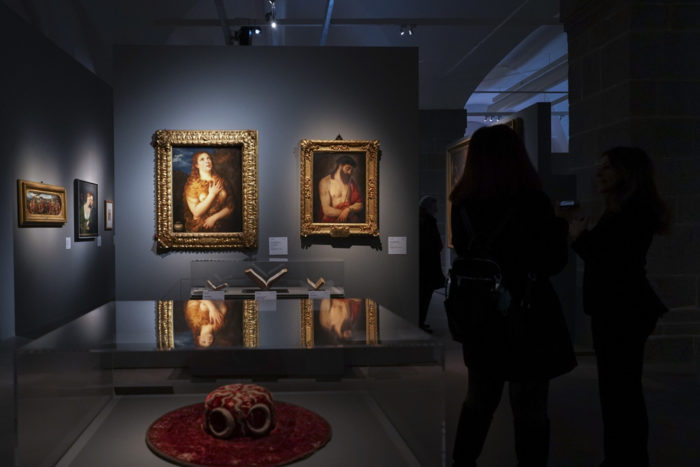 Two of the paintings by Titian hanging side by side 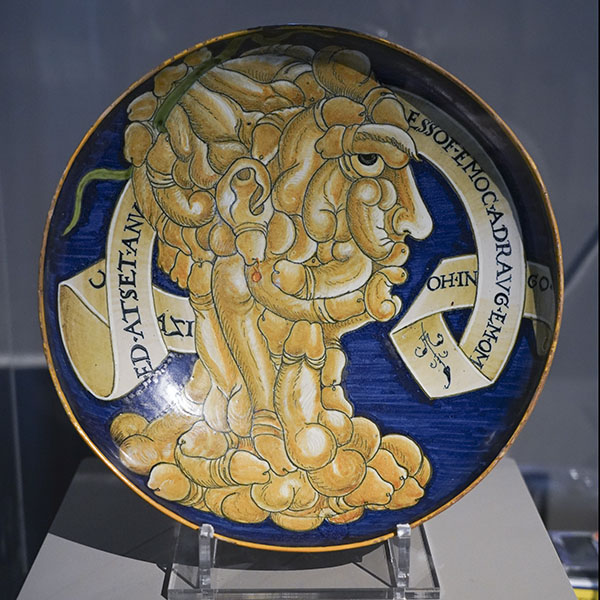 There are actually numerous scholarly articles that try to explain this plate – namely who is depicted or referred to here. The writing says “Ogni homo me guarda come fosse una tesata de cazi” (every man looks at me like i was a dickhead). Curators suggest it mocks commemorative coins and may refer to someone specific – perhaps to Aretino himself, given that a few years later he was subject of rebuttal in a few books including one called Rime contro Pietro Aretino. Be it a jibe at him, or just another ribald joke, I’m quite sure Pietro Aretino would have had a good laugh at this plate. Perhaps contributing to his death by laughter.

Pietro Aretino and the Art of the Renaissance
Uffizi Gallery, Aula Magliabechiana
November 27 2019 to March 3 2020

This article contains links to Amazon through which I may earn affiliate income at no cost to you.

Video in header credit: footage by Sandro Nardoni, assembly by yours truly.