Plautilla Nelli: a Restoration to Reclaim the Renaissance

I’ve been a little absent from the blog lately as I’ve been submersed by a very exciting project at work that I can finally share with the world! One of my roles at our communications agency, Flod, is crowdfunding consultant, and we’ve been working with the Advancing Women Artists Foundation to launch #TheFirstLast, a campaign to restore the First “Last Supper” by a woman artist, which was painted by the First documented woman artist of Florence, Plautilla Nelli. I love guiding crowdfunding projects, but I love it even more when the topic is related to Renaissance art. It’s a challenge to learn about the work of art in depth, and then think about how to best communicate it to “move” people to get involved. You can learn all about Nelli and the project on the Indiegogo page, while here I thought I’d give you a bit of “insider info” and personal reflections on why I think this is important. 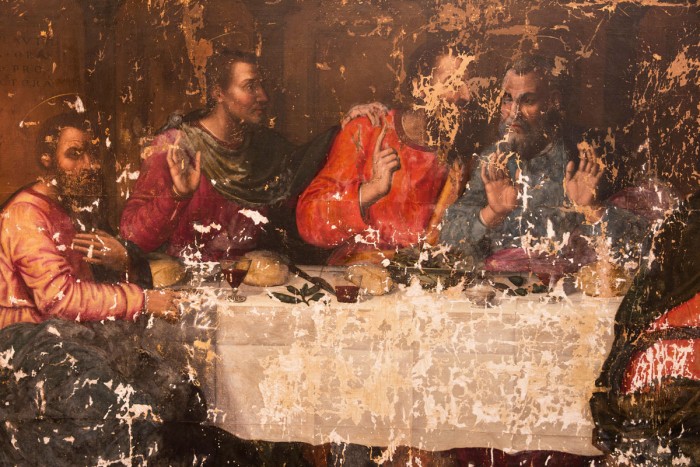 Plautilla Nelli, Last Supper, detail of left side of canvas under restoration

Plautilla Nelli was a 16th-century nun artist. Not a household name by any means, though I was lucky to be familiar with her because one of my professors organized a conference on her about 20 years ago. Vasari mentions her – just one of three women whose Lives he deems worthy of recounting – and says that there isn’t a noble household in town that doesn’t have a Nelli. Recently, AWA and other researchers have found 5 paintings in “series”, basically slight copies of one another, which seems to prove that the volume of production was such to create a workshop inside the nunnery to satisfy demand. Nelli was appreciated for a kind of saintly aura in these private devotional works, but she differs from other women in history by also creating large-scale altarpieces and other works for her own convent.

Yet Nelli was not in my Italian Renaissance art history books. In part, that’s because she worked just slightly later than the Renaissance at its highest point in Florence. Active in the 1560s, she’s considered the artistic heir to Fra Bartolomeo of the San Marco school; at one point, it was thought that she was his pupil, but he died before she was born – however, she inherited his 500 drawings, which unquestionably helped her learn her art. But Fra Bartolomeo didn’t make it into our survey texts either… 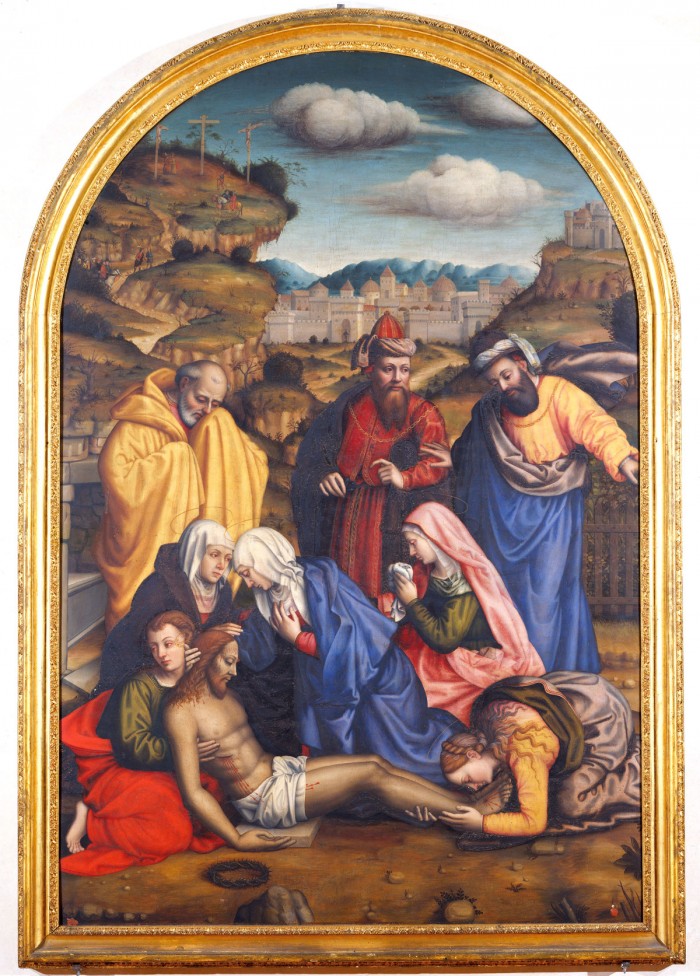 Nelli’s convent, called Santa Caterina, was located in Piazza San Marco (the building no longer exists), and the friars of San Marco controlled it. Both San Marco and Santa Caterina had resident artists, though the female convent mostly made small terracotta statuettes and perhaps embroidery, as was appropriate for this gender. Somehow, though, in this context, Nelli taught herself to draw and paint. And when she worked large or had numerous commissions, she taught other nuns to paint too. There are numerous studies about convents that demonstrate how these were forward-thinking, safe places for women at this time. We tend to think of being a nun as being limiting, but Nelli and her sisters enjoyed more liberties than married women at this time. Working as artists is just one of these: “normal” women could not join the guild required to sell art, so if they were to create any, it’d have been just for dilettantism. And what’s amazing is that thanks to Nelli’s art, the convent was able to become self-sufficient! That is something that few early modern women can say for themselves.

Nelli’s Last Supper belongs to the City of Florence but it isn’t on public view. It was made for the refectory of her own convent, and when Napoleon suppressed these, it was rolled up and put in storage for a while until it made its way into the in-use refectory at Santa Maria Novella, where until recently, a small group of Dominican friars had their meals underneath it. So, aside from a few yellowish photos in the few studies dedicated to Nelli, we can safely say that nobody has seen this painting for 450 years. Yet: this painting is the largest known work by a female artist in the early modern period. It’s the only Last Supper we know of in the whole world, of all time, by a female hand. It’s her masterpiece, and as such it’s a key work to understanding this artist’s contribution to art history. But it’s current state of restoration doesn’t allow for a full reading: it’s covered in nasty yellow varnish and has plenty of in-painting from the last century. 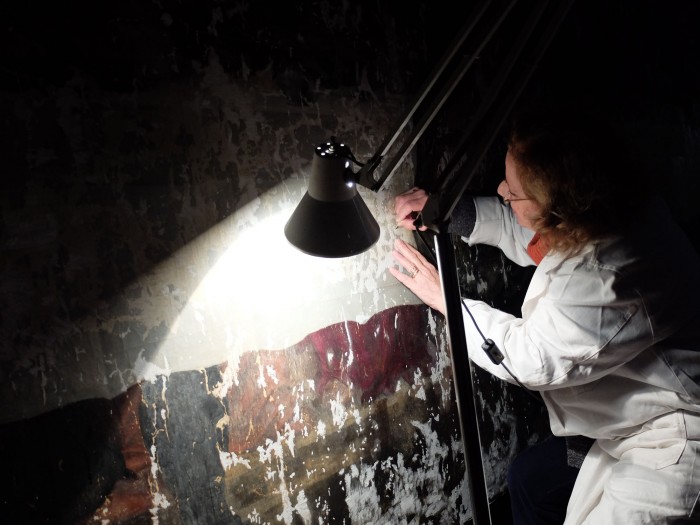 A photo I took of Rossella Lari, the restorer, working in raking light. She’s put stucco on where paint is missing. She will in-paint with neutral patches of watercolour.

AWA, which regularly sponsors the restoration of works by women artists, has taken on the task of restoring Nelli’s huge canvas and is seeking partial funding to cover it through crowdfunding on Indiegogo. They have already moved it to the private restoration of Rossella Lari, where I recently visited it. She has been removing the in-painting, which was extensive, and has done some cleaning samples. There have been diagnostic tests to check the painting’s general health. Right now, it looks like a patient in the middle of open heart surgery, but I’ve seen Rossella do miracles with other very ruined works too – my first encounter with AWA was when they did a lovely job with an Artemisia Gentileschi about 7 or 8 years ago. After restoration, we’ll all get to see the Last Supper at the Museum of Santa Maria Novella.

I think most of my readers will understand when I say that by helping bring to light women artists of the past, we are “reclaiming the Renaissance”. It’s a way of justifying the injustices of the way “history” (rather than “herstory”) is documented and told. There were not many Nelli’s in this world, but there were some. By finding, researching, restoring and most of all telling the story of women artists like Nelli, we’re contributing to a wider vision of this period. A period in which a nun became an artist out of sheer will, worked with carpenters to make large supports for her canvases, contacted clients and made transactions, as well as painted alongside sisters in a workshop we can only begin to imagine.

I’ve already made a contribution on Indiegogo towards the restoration of this work of art, and hope you will too. Our team hopes to raise $65,000 in 46 days (you have until Easter Sunday, how appropriate!) to pay for the restoration. If you love art and Florence, you’ll get involved too!