Public art and the Piazza – Paladino in Santa Croce

The topic of this month’s Italy Roundtable is the piazza, and Florens 2012 handed me the perfect solution to what to write. On the occasion of the Biennial of cultural and environmental heritage, Fondazione Florens commissioned an impactful work of public art by the Italian contemporary artist Mimmo Paladino. Piazza Santa Croce became a magical place filled with art, an installation of marble blocks enhanced with symbols from Paladino’s visual repertoire in various media. It took a few days to put up, and it will take a few days to take down. It was present only from November 3-11, 2012.

I want to reflect on the work itself, briefly, and on its use by the population and impact on the way we might think about the piazza in general, and piazza Santa Croce in particular. 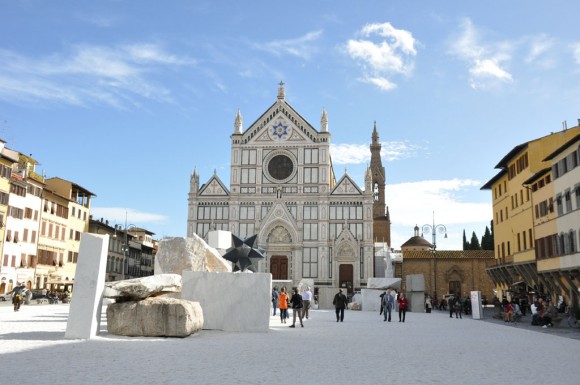 In the piazza, which has been filled with white pebbles that provide a snow-like effect on a grey day, there are huge blocks of marble, some cut and sanded down to a smooth finish, others in a rougher state. These gigantic blocks are laid out in the shape of a cross, but you can’t really understand this unless you see it from above, as in this film shot from a helicopter.

The shape of the cross fits into the visual symbols chosen for Florens by Sergio Risaliti, who also contributed to the curation of the “ostension” (solemn display) of three crosses in the Baptistry and the installation of olive trees in Piazza Duomo. All three installations were present only during the 10 days of Florens. The cross here fits rather obviously in with the piazza itself – Santa Croce – and is intended to be in dialogue with the church. When Paladino was invited to speak on the theme of art and public space during Florens in a roundtable discussion with Risaliti and others, it was suggested that this cross is a contemporary and ephemeral open-air church, the first contemporary church in the historical center of Florence. On that we’ll talk later…

The cross is also a recurring symbol in Paladino’s other works, for example in large works on paper in the Madre museum in Naples, the via Crucis of 2008, about which the museum writes “Memory and quotation, figurative mimesis and a fantastical recreation of reality. Mimmo Paladino’s art sinks into the unconscious of Mediterranean culture, to capture its symbols and legends, left buried beneath the veil of Reason that reduces the world to profits and losses, saints and sinners. His stylized heroes and Don Quixote are mythic simulacra of a nocturnal universe that moves behind, in front of and beyond the usual evident and reassuring social identities.” If that helps you understand Paladino’s symbols better, you are clearly more informed about contemporary art and language than I. 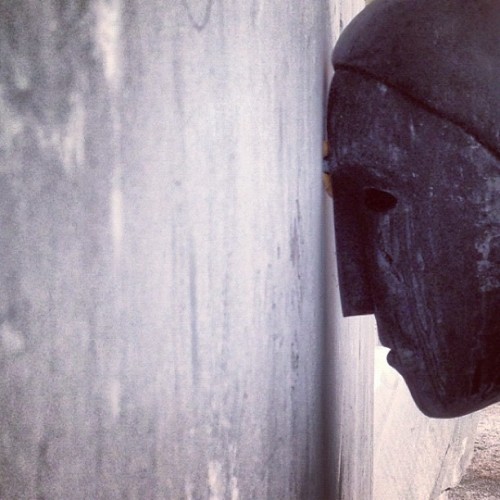 Amongst the blocks are shapes and elements found in works by Paladino in other media: empty-looking armless figures, one of which seems to be banging its head against the marble; a multi-faceted geometric star, a circle incised with symbols, birds and shoes, fluttering gold leaf… 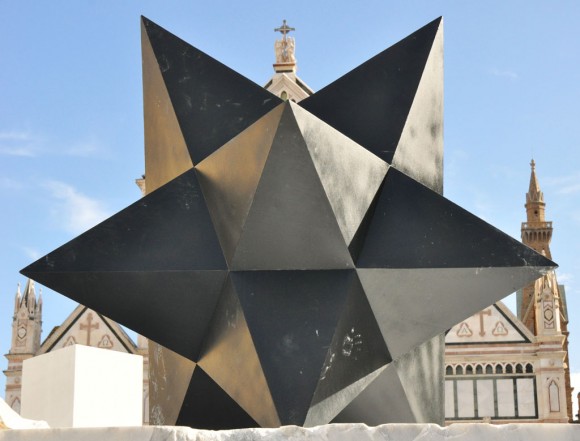 Most of the information I can find online refers to these recurring elements as archaic symbols; one critic writes that these symbols “are conceptualized from a basic image, reduced to a fundamental expression, and in the end create an alphabet of simplified and elegant signs.” Although these look as much like symbols as anything I have seen, and most critics refer to them as such, the artist has been quoted specifically as saying “There are no symbols in my works”. I prefer to take this statement as my way out for not being able, for the life of me, to explain what they mean. They are no simple alphabet. One thing is for sure – the symbols, or non-symbols, reflect and frame elements of the church’s facade, indicating a careful consideration of the space by the artist. 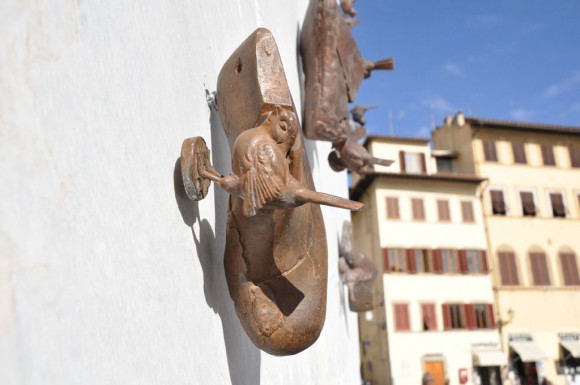 What did people think of it?

Ok, this work of art was in the piazza for just over a week. How was it used, and what did people think of it? First off, the critical reception was good. The outspoken critic Philippe Daverio said, in video by ArtTribune, that the work was a bit rhetorical but that it was positive because it created “clamore” – essentially, it makes noise, makes people talk about it, or go out to visit it. The press was also generally positive.

Unquestionably, even in rainy weather, it got people out of the house to take a look. In the many photographs I’ve seen shared on facebook and instagram one thing is very clear – lots of people visited it. In this instagram, @Maraina81, a young archaeologist/blogger, writes that the piazza looks like a painting by Brueghel! 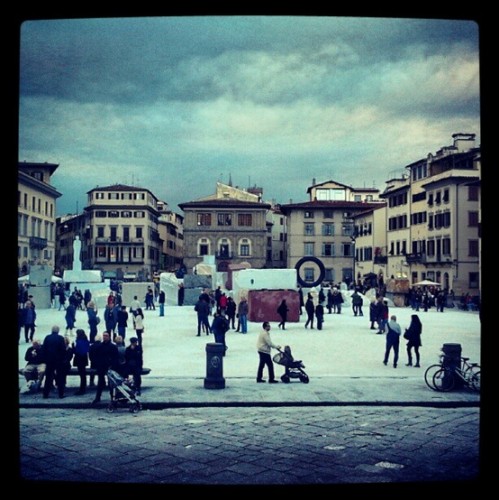 One thing people seemed to like was that this was art made to be touched, climbed upon, even… written on. A photo posted on the facebook page of Florens by photographer Mauro Sani shows kids passing from block to block of marble, asking if this is safe. 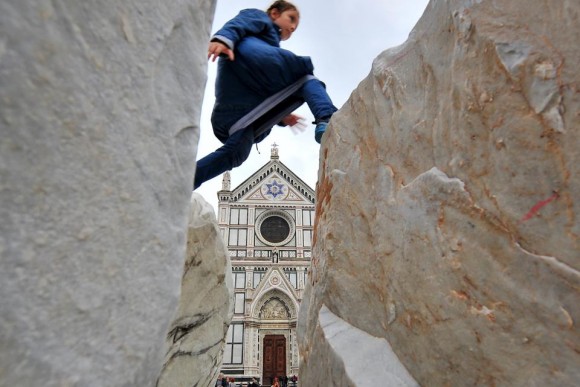 For others, the sculpture became a training ground for parkour. Is this a respectful treatment of art? I am actually inclined to say “yes,” because parkours is also an art that requires training and sizing up space.

Paladino intended the work to be lived and experienced, and specifically permitted people to leave their signs on it. At the opening ceremony, people were allowed to trace their hands on the marble with chisels; this practise continued with pens and pencils. Unfortunately, people also took this as an opportunity for stupid graffiti – though I note that nobody dared think of spray-painting it, and in one case the graffiti was a poetic statement about art, written in pencil. No guards, no rules, just art open to the good sense of people who had to decide what was allowed, or what was appropriate. So, it’s public art that asks citizens to think about what to do with the public art they’ve been given.

Returning to the interpretation of this work of art by its curator and artist as a contemporary, impermanent and open-air church, I wonder how to resolve this interpretation with the actual use of the piece by the public, which in some cases is more that of a playground and photo backdrop than that of a church. 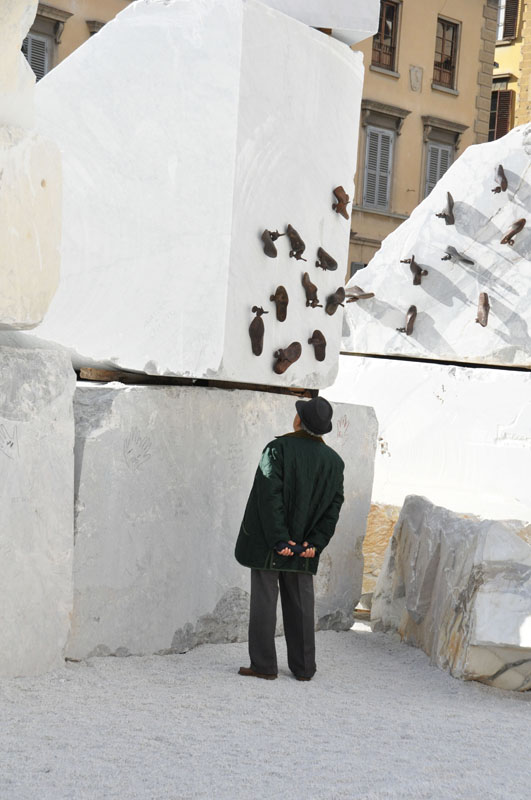 A man gazes at the art

The cost of an operation like this is high, and a sticky point is the money spent at a time of crisis – many comments I’ve seen around the net asked how much Fondazione Florens spent for this. I can answer: zero. It was sponsored by Fondazione Henraux, a marble company with a history of sponsoring marble art, and although I can’t find it written in the press information, I am quite sure I recall overhearing that the artist himself worked for free. Some might say that Henraux should have instead donated the money to schools or other worthy projects, to which I can only say that private funding of the arts is also necessary – in fact, that was one of the major themes discussed at Florens 2012.

You would think that most people would react positively to this piece, but actually it seems many Florentines hated it. While it was being put up, for example, people who lived or worked near the piazza complained of the noise, as if they were not already used to the noise of drunk people overflowing into the piazza from nearby bars at night, an issue that has plagued this area in the past 10 years. My answer to that is: at least the art, once it’s installed, doesn’t make noise!

Negative comments on an article in the Corriere Fiorentino highlight a lack of understanding of the work, leading one florentine to call it a “troiaio”, an offense which literally means a dirty place (often full of prostitutes). Another commenter refers to it as a marble jumble whose meaning they cannot understand, while yet another suggests it represents the decay of Italy and its political parties. Again in this video, an elderly Florentine woman says that the work is a “disrespect to the piazza, because I simply can’t understand what it is meant to say.” Unquestionably, the meaning of this work is partially up in the air, but one thing it is not is dirty! Is difficulty of understanding to be a barrier between people and contemporary art? Why do some people simply dislike, even hate, things they cannot understand? 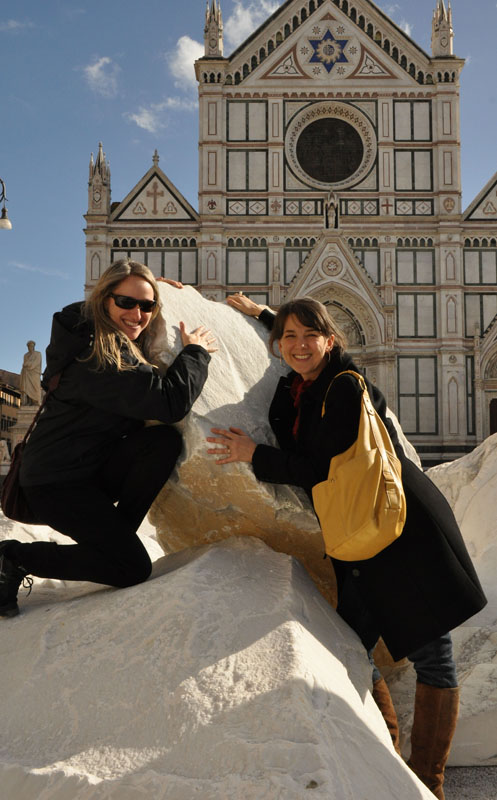 Fellow art historian and blogger Jenna Francisco and I hug the art.

Over the course of its installation, numerous people specifically made a trip to Santa Croce to visit the work, as well as to see the crucifixes in the Baptistry, often combining this with lunch and shopping, and snapping a few pictures on the way. At night, the work remained open to the public. It seems to me that the piazza was used in a different way in the past week than throughout most of the year, providing specific attractivity to the center of florence to experience art that is free and interactive. And there’s nothing wrong with that.

And without further ado, I remind you that the Italy Blogging Roundtable is a monthly thematic appointment on the blogs of four female bloggers who love Italy. You can see these posts on ArtTrav by clicking here. To read what my colleagues wrote about The Piazza this month, please check out: