The debate to finish the facade of San Lorenzo

The association of “Friends of the Elettrice Palatina” and the Comune of Florence have opened up a public debate by proposing that the facade of San Lorenzo be finished according to Michelangelo’s project. 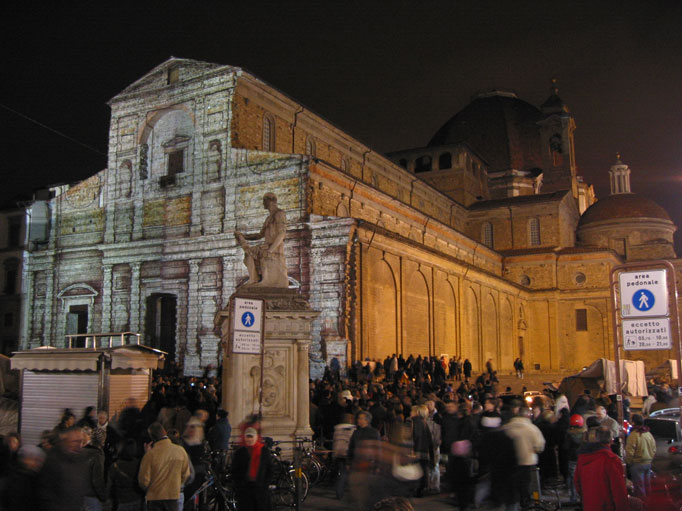 Michelangelo proposed a project for the building’s facade upon request of Pope Leo X, who was a Medici. He worked on the design from 1515-1519 but was removed from this job in order to work on the Medici Chapels (Sagrestia Nuova). A wooden model for the facade is conserved in the Casa Buonarroti. At the Pope’s death, money had run out, having been used for a war in Lombardy, and the facade had barely been started, beyond the quarrying of the marble.

To get us going, they projected a computerized reconstruction on the plain brick facade on Sunday February 18, 2007. Here is a photo. 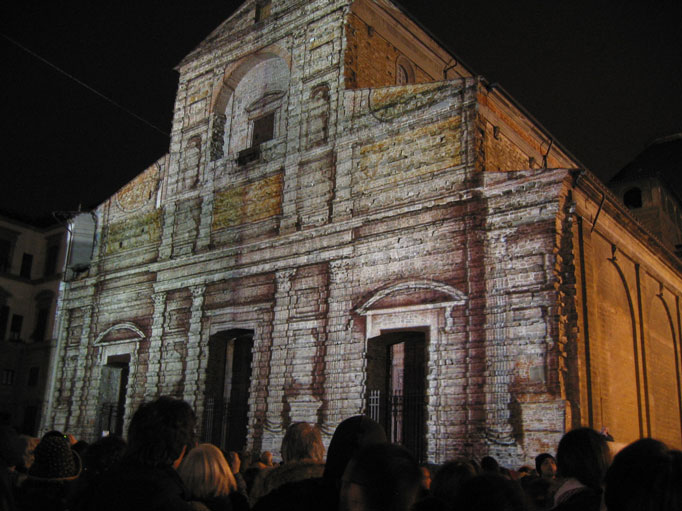 The projection included a narration that presented evidence from primary sources, mostly Vasari, of quotations indicating the Medici and Michelangelo’s desire to see the facade finished. Furthermore, the promoters of this project cite the last will and testament of Anna Maria Luisa dei Medici, the “Elettrice Palatina” and last Medici (died Feb. 8th, 1743), who left the family’s possessions to the state, with the condition that nothing would be removed. Funds from the proceeds gained from Medici works of art were to be given in part to the maintenance of San Lorenzo, and apparently to the eventual construction of the facade. Anna Maria herself had a project made for the facade during her lifetime, but this, too, did not come to fruition.

The city of Florence has not yet revealed any monetary estimates of how much a project of this sort would cost, if they decided to do it. Meanwhile, we can consider whether or not it is a good idea. Three points to keep in mind:
1) The projection does not look anything like what Michelangelo had in mind, if we compare it to the wooden model
2) Modern building techniques are different than those of the Renaissance and would render the facade with a machine-made effect that would not be in keeping with the intentions of the Renaissance patrons, the building, or the area.
3) Vasari himself warned against the dangers of trying to imitate Michelangelo’s architecture, which he praises highly despite its departure from the classical canon. This he mentions twice in his Vita, the first time softly: “The license he allowed himself has served as a great encouragement to others to follow his example; and subsequently we have seen the creation of new kinds of fantstic ornamentation containing more of the grotesque than of rule or reason.” The second mention indicates his displeasure at attempts to copy Michelangelo’s architectural style: “certain plebeian and presumptuous architects lacking in disegno have in our times produced all their monstrous things, worse than the German.”

What would Vasari think if we, in 2007, presumed to finish this work according to our (mis?)understanding of Michelangelo’s plan? I think he would have a fit.