What to See in the Bargello Museum

The Bargello is Florence’s sculpture museum, which creates a three-dimensional counterpart to the Uffizi’s collection of Renaissance paintings. Although I used to think that painting was more appealing and easier to understand than sculpture (and architecture), any time I’ve brought visiting friends to the Bargello, they’ve been really excited about the art there. Unlike the Uffizi, which is huge and has a ton of must-sees, the Bargello really only has a few super important sculptures, giving you more time to enjoy them before you get “museum fatigue”. It’s also a rather pleasant museum, not terribly crowded, with interesting spaces and a variety of types of works and rooms. 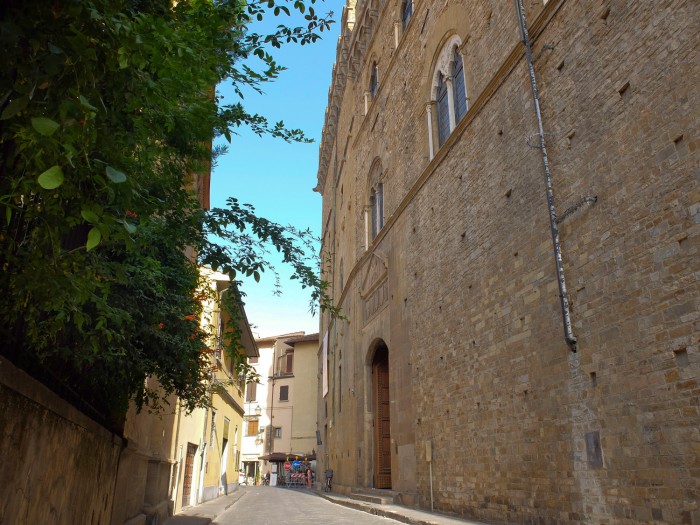 You’d hardly recognize the Bargello from this angle, with a summer road closure and framed by the only bit of greenery downtown!

To help your next visit, I’ve made a list of my favourite works of art in the Bargello Museum. I’ve mentioned the top, most famous sculptures but this is also a personal list so I’ve included some quirky items you won’t be seeing anywhere else – guaranteed!

Donatello’s St. George and the Dragon 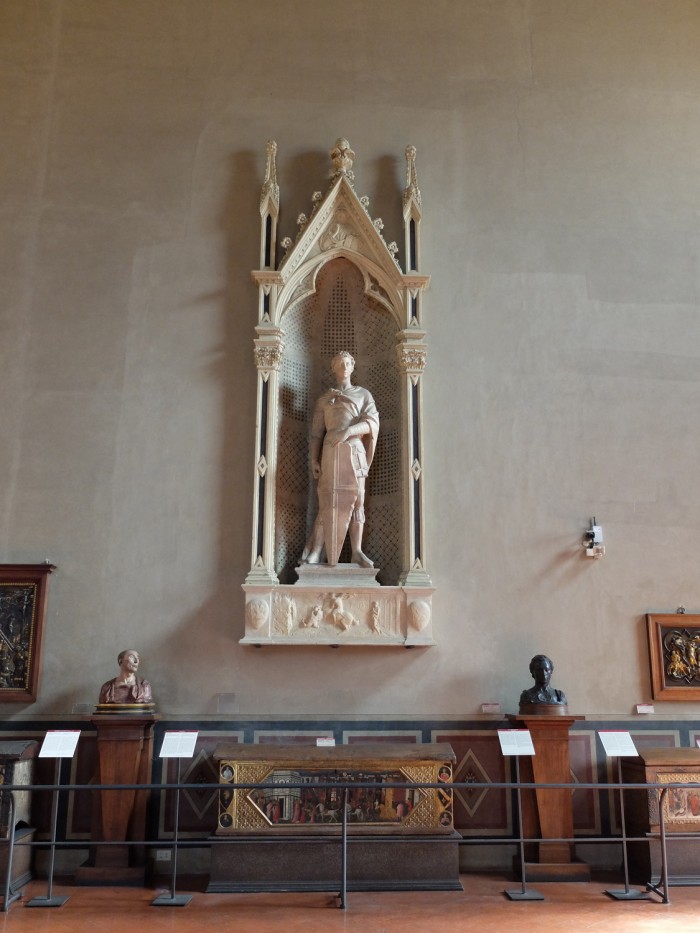 I could talk about Donatello’s marble sculpture of Saint George for Orsanmichele, but I’d rather look at the relief panel below it! On the far wall of the Donatello room on the first floor of the museum you’ll see a marble niche holding a sculpture, and beneath that is a low relief panel. The whole ensemble was made for the church of Orsanmichele – an ex-granary that turned sacred thanks to a miracle-working Madonna. And it’s for this place that some of the first sculptures we can define Renaissance were made. Donatello’s youthful and lanky Saint George faces slaying a dragon in his marble awkwardness, a walking advertisement for the armourers’ guild who paid for the work. 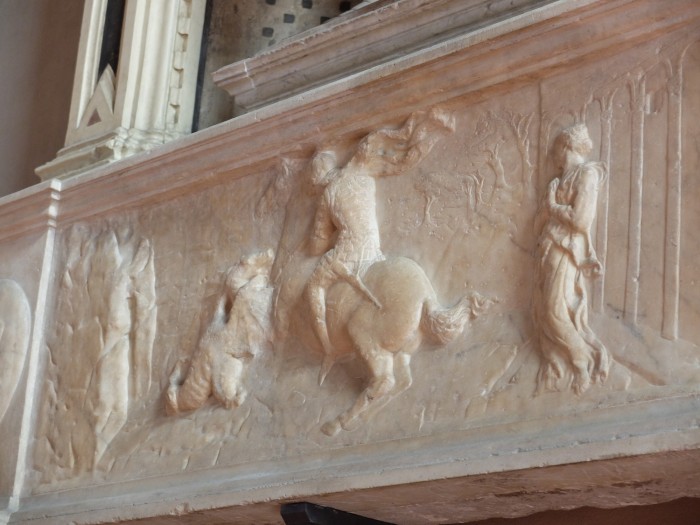 Below him, a very low relief panel narrates the full story in what is likely the first example of a technique called rilievo schiacchiato (flat relief) that Donatello invented. See how in half a centimeter he manages to draw out perspective? Wow. 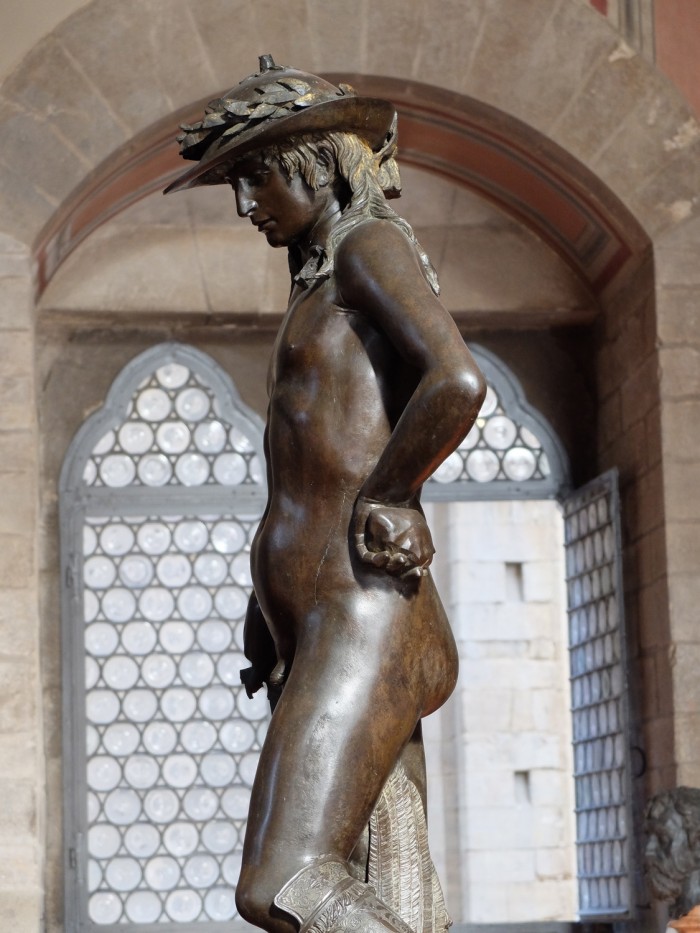 There are two David sculptures here by Donatello and they are a few decades, yet worlds, apart. The Bronze David, as this one’s generally called, is probably a later work (from the 1440s). The difference between the sculptures of the same heroic subject that Michelangelo would capture is generally accounted for by their destinations. This bronze work was created for a private environment, where it would be acceptably cheeky. For, speaking of cheek, check out the young boy’s expression, his odd “armour” that reveals more than it hides, and his very firm rear end! A recent restoration has revealed traces of gilding on the decorative elements, and a richer bronze colour than we previously saw on this work. There is a third David in this room, of a similar size and also in bronze, by Verrocchio, which makes for additional comparison. 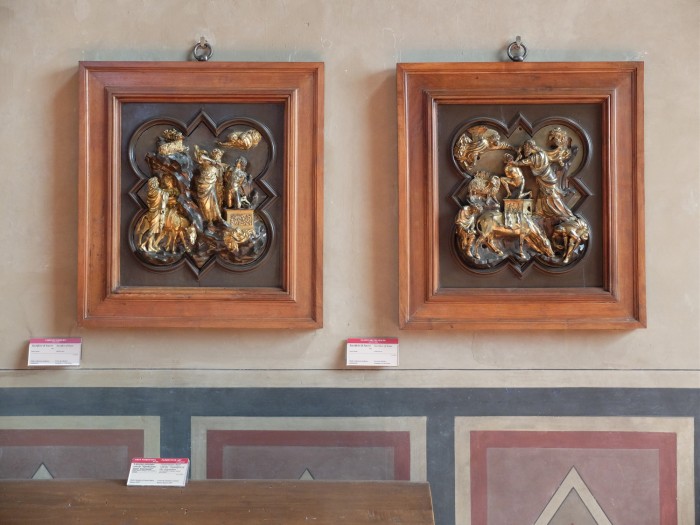 Like many things in Italy, both the dome of the Duomo and the decorations of the Baptistery were subject to a public “contest” in which anyone could enter by producing essentially a portfolio piece. For a set of doors for the Baptistery, there was a contest in 1401 that drew a few famous names including Brunelleschi and Ghiberti. Brunelleschi didn’t win, and went on to win in the architecture category (just kidding, but it played out something like that). Here at the Bargello we can see the winning panel by Ghiberti and the runner up by Brunelleschi. Participants were asked to represent the old testament scene of the Sacrifice of Isaac, and they had to include the father and son, as well as an altar, a donkey, a hill, two servants and a tree. Which of the two manages to compose all these elements in a more elegant manner? While Brunelleschi tossed in numerous judge-pleasing references to Roman art, Ghiberti did a better job on composition. 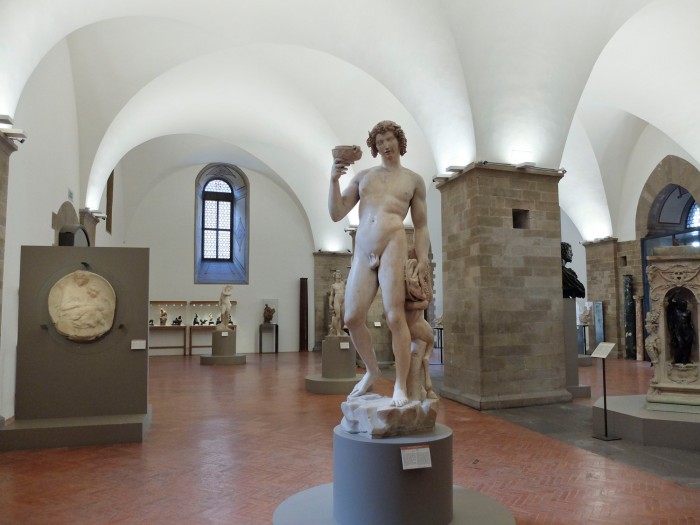 Michelangelo’s Bacchus in the room dedicated to the artist

Down on the main floor of the museum is a room dedicated to Michelangelo and his school. There are a number of works to take a look at here, including the bozzetti, little studies by followers of the master, or in some cases mockups for future larger works. But the star here is most certainly the Bacchus, a work by the young Michelangelo. This sculpture was commissioned for the Roman collector of antiquities, Cardinal Riario, who had previously been swindled by the artist, via a dealer: Michelangelo had faked an antique Cupid and sold it in Rome, but the Cardinal wasn’t fooled. He was, however, impressed. But when he saw the Bacchus, he refused it – perhaps it was too sexy? – so it ended up in the sculpture garden of his envoy, Jacopo Galli. I’ve always been impressed at how Michelangelo manages to make a piece of marble look so soft. He sways in abandon, his flesh softened with excess, leaning on his little satyr friend (who also handily provided physical support for the standing marble). 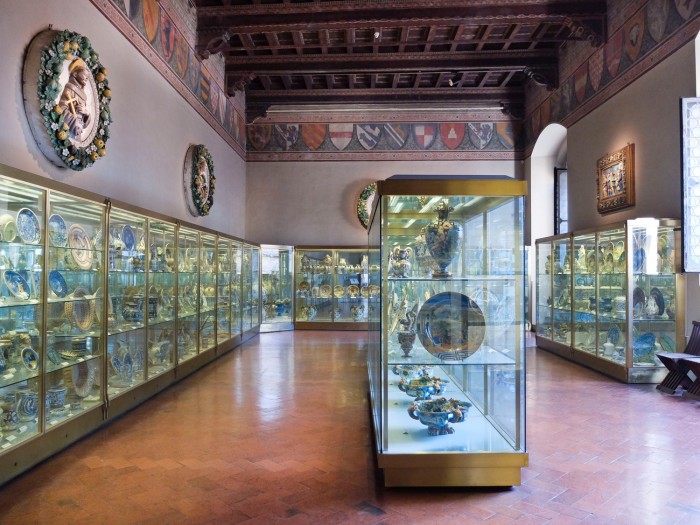 Few people venture in to the room dedicated to a compact collection of maiolica, maybe dissuaded by the old style glass display cases. But this room is an excellent capsule of about 800 years of the history of the decorative arts, from the first more primitive shards found in Tuscany to some modern design pieces. In the 16th century, artists in Umbria in particular painted “historiated” plates and all sorts of shapes of dinnerware – the jury is out on if people actually ate off this stuff – which helped diffuse some of the major motifs of Roman art to households beyond the capital. 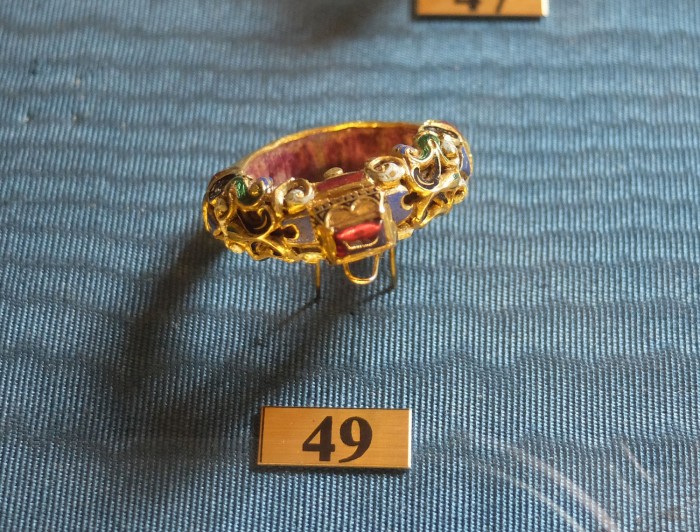 The first time I visited the Bargello I was a geeky art history study abroad student in 1997. This one glass display case of antique jewelry caught my eye and I was particularly obsessed by a ring, indicated as a Central-European ruby (wedding?) ring of the 16th-17th century. Decorated with enamel of many colours, it is lined with velvet, which I have always thought would be indulgent and comfortable but not so practical or long-lasting. So I’m including it in my personal and quirky list of Bargello favourites… go take a look! 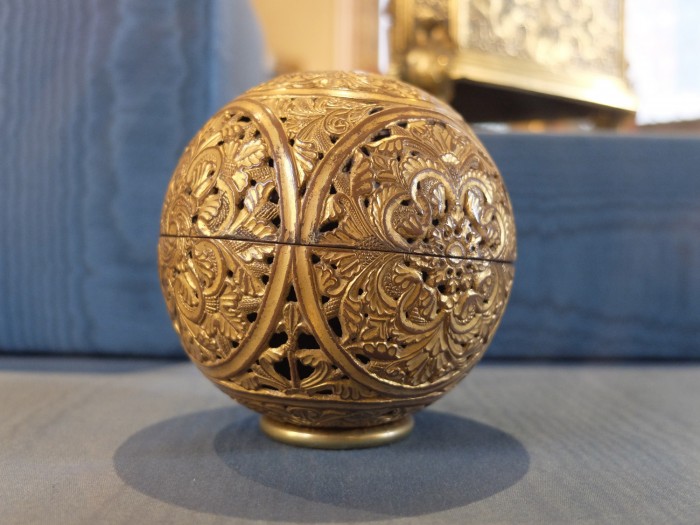 Another one of my personal favourites is this elaborate bronze ball made in Venice in the 16th century. Although it looks like it could be an incense ball for a church, it is actually an ingenious handwarmer, apparently an “ecclesiastical handwarmer” in fact! Trust the Venetians to create something so decorative and beautiful for a simple function, when warming a brick might have had the same effect. Thus you can imagine that whatever church owned this object must have been very rich… or its priest had particularly cold hands. 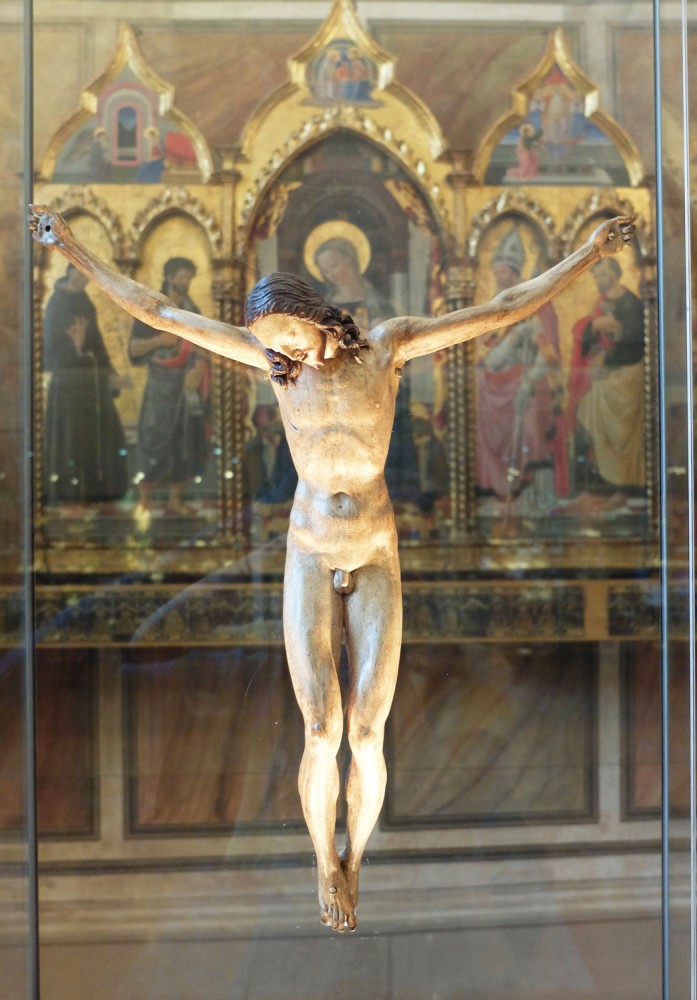 The building’s 13th-century chapel was where death-row prisoners could say a final prayer, hence the fresco cycle which focuses on penitent saints. The chapel-like structure is maintained in the current museum display, with a very small crucifix acting as a kind of “altar”. This tiny wooden sculpture was recently attributed to Michelangelo and is still matter of debate. At the back of this room are some display cases with liturgical items, of which I find the engraved “pax” to be interesting because they are examples of Florentine and European goldsmithing objects that were instrumental in the development of the printed image: similar tooled pieces of metal were inked to create impressions.

The Bargello’s opening hours currently vary depending on the season, opening for longer hours in the Summer to accommodate greater numbers of visitors (but there’s hope to extend hours permanently). There are also occasional evening special openings and events held in the courtyard, which are very special moments to visit.

I got my reserved Bargello tickets from Tickets Florence, a handy website where you can get all your tickets for a Florence visit in one transaction.

Opening hours are currently as follows (until November 1, 2017): open daily 8,15 – 17,00, But: consider the following “The museum is closed on the second and fourth Sunday of every month and closed the first, third and fifth Monday of every month.