August in Italy: chiuso per ferie

I received an email the other day from an office that had the single purpose of informing everyone on the mailing list that they will be closed from August 1 to September 3. It is hard to believe that in modern Italy, and during the relentless economic crisis, so much of the country still closes down for August holidays. “Chiuso per ferie” is an August tradition in Italy, but where does it come from, and why does it persist?

Italy has one of the longest school breaks in modern Europe, and historically it was even longer. The generation before ours was off from June 10 to October 10! Now kids return to the classroom by mid September, but still finish early – this year it was June 7th, leaving parents wondering where they can dump their kids for three months. Summer camps cost hundreds of euros per week, so many ‘nonni’ (grandparents) are put to work in childcare, preferably at the beach, and parents take off what time they can to do their part. This scholastic periodicity to the year comes in part from tradition, and in part from a lack of airconditioned infrastructure, which makes it impossible to work in the hottest months.

I started asking around to figure out when this tradition started. On the blog “Tagliaerbe,” Davide reflects that August closure is anti-modern, and many readers agree with him, though others value their traditional time off. I asked him when people started taking this time off, hypothesizing that it was the economic boom of the 60s. His surprising answer reminds us of the importance of Ferragosto, the August 15th holiday imposed by the Roman Emperor Augustine, who forced festivities at that time. He also mentioned something I did not know – that in the Fascist era, people were encouraged to travel at Ferragosto with major discounts on the new regional trains. (I have to also mention how cool it is that an SEO expert was able to provide me with a profound answer like this, not to mention within one hour, on a Sunday.) 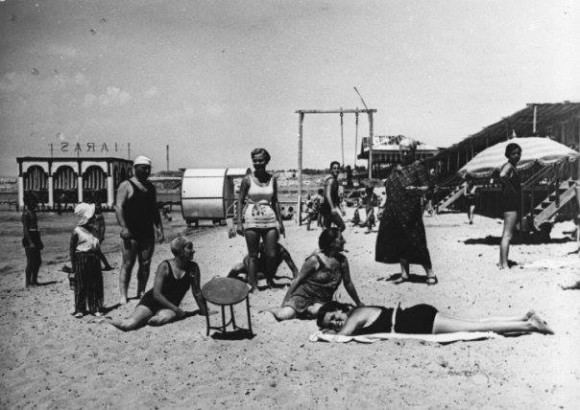 In the 1950s, the tradition of the bathing establishments and holidaying at the sea arose, especially on the coasts of Northern and Central Italy, while in the South, people continued to go to the beach at more economic city beaches. My father in law recalls how in Taranto (Puglia), mothers and kids often spent the whole day at the beaches in the city, in those pre-Ilva days when the water was still clean; others packed onto crowded local buses to go to the free beaches outside of town, but more rarely. Wealthy families had beach homes close to the city, to which whole families moved in the summer and from which the father would commute to work – mothers did not work, or were teachers during the school year. The poorest were able to take advantage of state-subsidized summer camps for kids, set up at the beaches towards San Vito (about half an hour out of the city), where kids were shaved for maximum hygiene and coolness and kept for months at the beach! Other families moved to country houses, since the beach was not yet a tradition adopted by 100% of Italians. 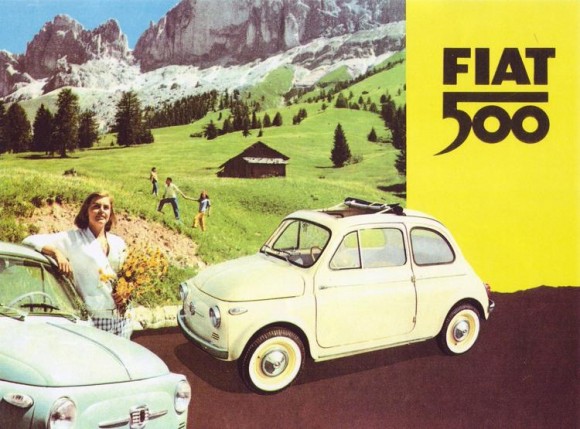 In the 1960s, Italy was in full economic boom, and with this boom came inexpensive cars like the Fiat 500 and also the Vespa as a cheap mode of transportation. These vehicles were marketed as keys to liberty and part of that liberty involved packing up the whole house on the roof of your Fiat and taking off to the beach or to the mountains for August! In this industrial based society, many companies closed for this month in order to save money – holidays could only be taken when the company told you, so they didn’t have to worry about covering the jobs of people on holiday. Possibly, this type of closure and forced holidaying was also structured as an encouragement to the consumer economy, of cars and other industrial products, as well as of the tourism economy which at that point exploded. Take your pick of movies from the 60s and 70s set in Italy and you’ll see beaches full of tanned bodies, from the most glamorous to the most popular of settings. (Here is an example of 1960s home videos taken at the beach from RAI.)

Give people a summer holiday and they’ll never give it up. By the 90s, industrial Italy was already waning, and now, in 2013, it hardly exists. If I think about my friends and where they work, few work for companies that have an industrial production line. The few that do actually do close for the whole month of August, namely if they are SMEs (small or medium sized) and/or family run. Those that don’t, however, still close. Not for the whole month, but for a week, two weeks or more… I was speaking with a friend who works in a digital startup and she said “we aren’t closing for August, well, just for the week around Ferragosto,” which is a funny form of remaining open! I work in a digital communications company, Flod, and in recent years we have claimed not to close, but it just so happens that everyone takes the middle two weeks of August off, resulting in, in fact, closure. Attempts on my part to work through these weeks have failed: there is no point… I have no clients.

Being “chiuso per ferie” in August is ingrained in Italian society, and remains so despite many people disdaining it. August in the city means less traffic and always finding parking spots. It’s often less hot than in July. People who do work in August say that it’s calm and quiet and they can get a lot done. But the “italiano medio,” your average Italian, still insists on going to the beach at the most expensive time of the year, leaving the city empty to those smart enough to stay in it and those too poor to leave it (though even the gypsies and itinerant vendors move to the seaside – they can’t eke out a living begging in an empty city). Even the Italian parliament closes down, despite public outcry (we’ll see if they dare do it again this year – it might cause a revolution).

Me, I’ll be going to the beach in Maremma for two weeks. Sure, I’d rather go in July, but then I’d find myself in an empty, un-airconditioned office in Florence in August, when the bus system runs so infrequently that you melt on the sidewalk waiting for it, for even the bus drivers are all at the beach. If you can’t beat ’em, join ’em.

Italy Roundtable on August in Italy

What do you think of the fact that a whole country closes down for August? Add your stories and comments here!