Three reasons to visit the Vespa Museum in Tuscany

There’s a museum in Tuscany that is dedicated to the Vespa, the international design icon associated with Italy. It’s called Museo Piaggio but it might better be called the Vespa Museum for that’s name of the famous scooter made by Piaggio, a brand name that is less known abroad. Located in Pontedera in the province of Pisa, it’s just a short train ride away from Florence and is walking distance from the train station. Here are three cool reasons to visit this museum. 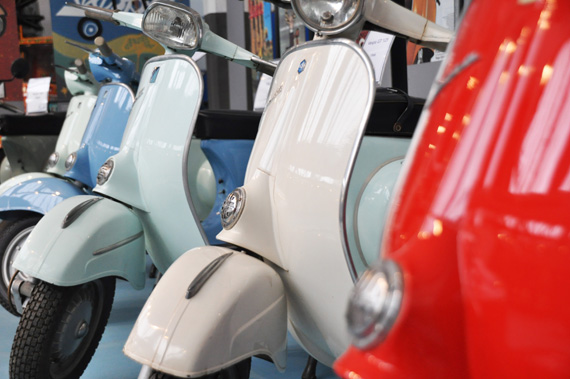 Who could not love this fun little scooter! Made famous worldwide when Audrey Hepburn enjoyed riding on the back of one in Roman Holiday, it’s a symbol of Italian-ness and liberty. At the Museo Piaggio, you learn about the first ideas that led to the design of the Vespa, which was of course modified over the years, but it remains pretty close to some of the most important elements like the high front-mounted headlight and the rounded shield. 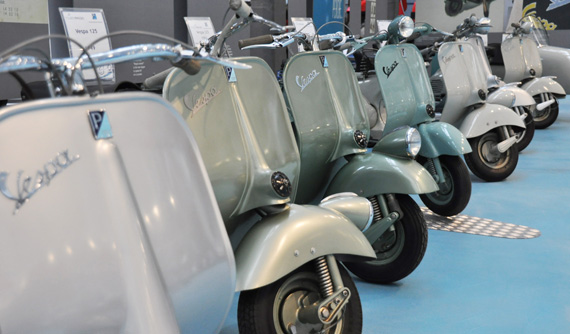 In our guided tour, we learned that the Vespa was developed based on how people sit, something that seems obvious, but the leg space, rather than something to straddle, is what made this machine really revolutionary. Why? Well, for one, you can ride it wearing a suit, or a skirt. In fact, after targeting the vehicle to business commuters, Piaggio opened up the market to women, who could gain independence riding one.

We also learned about some of the other machines present, from the classic plumbers’ Ape to the adorable Ape Calessino, and to collectors’ items like a cross between a Vespa and a helicopter. 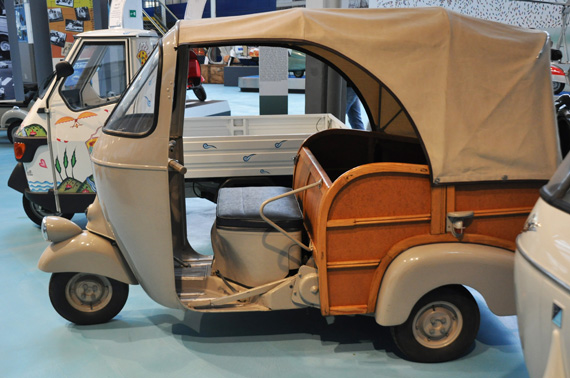 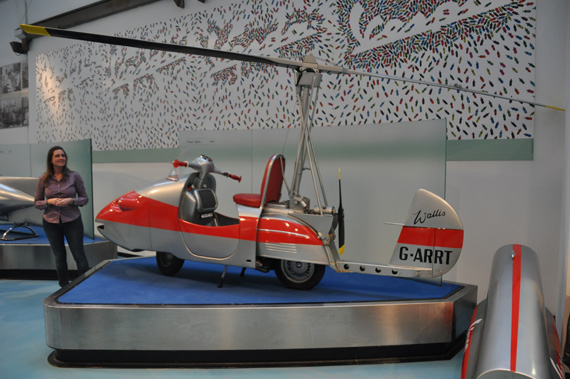 One of the most interesting parts of this company museum display is the juxtaposition of machines and reproductions of advertising posters, which show you the various ways that Piaggio marketed the Vespa over the years. There’s the independent women in a short straight skirt, and an early 60s poster targeted to young couples (note the absurd lamb!); later we get bell-bottom wearing men and youths of all sorts. The Vespa has always been marketed as a fashionable and affordable mode of transportation… because it is! 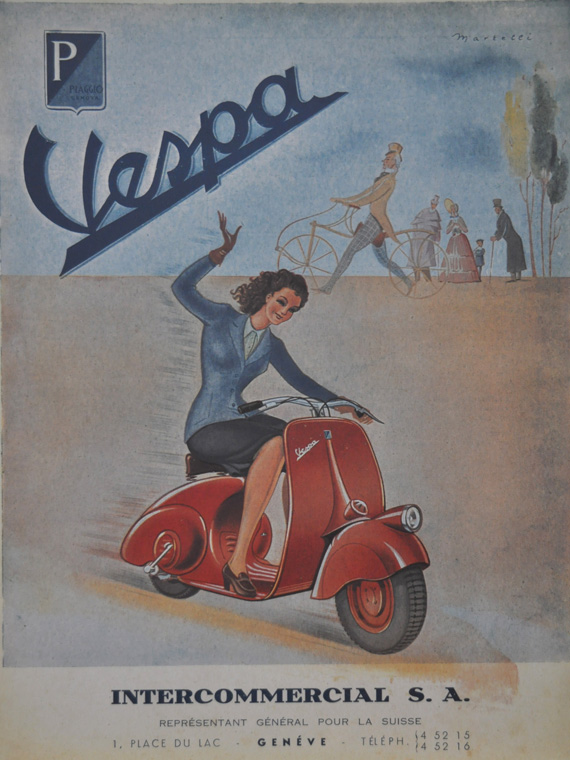 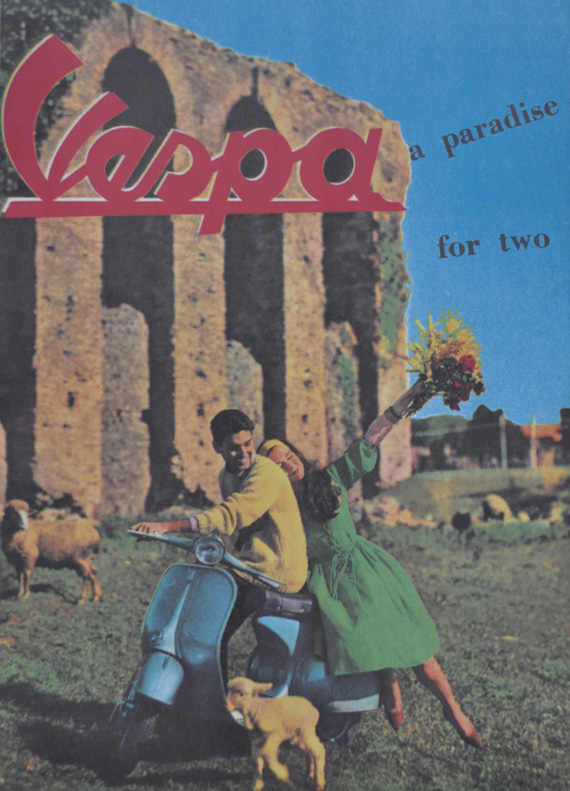 The museum is set up in an ex-workshop floor that maintains some of its original elements like big hooks and bridge cranes and an overall industrial look. In keeping with this historic decor, near the museum entrance and around some of the service areas, note the fun workplace signage about safety and smoking. 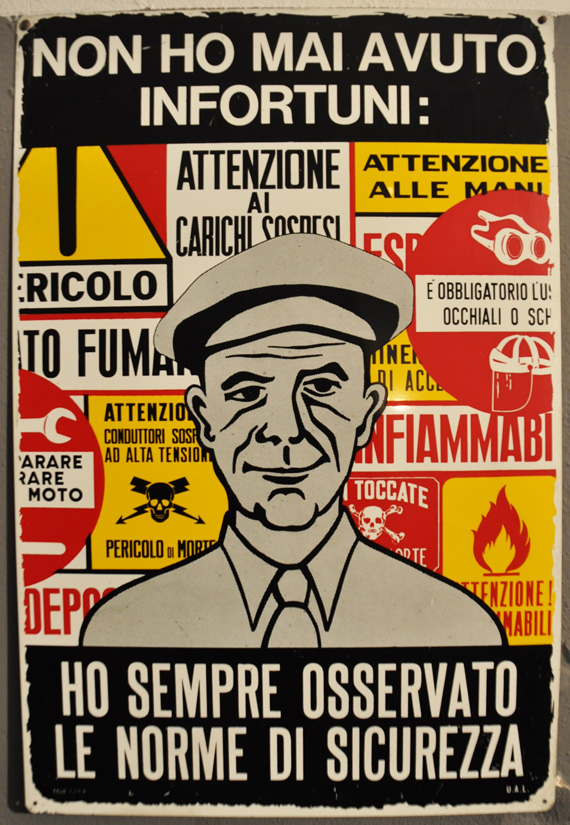 The museum geek in me is also impressed that the Museo Piaggio recently won an award for best company archive, a collection started in 1992 and a hint of which is visible as part of the museum display. The archive is in line with the general goal of the museum, to make clear the historic value of the company and its lengthy production, in order to study and encourage future entrepreneurship and creativity that is made in Italy. 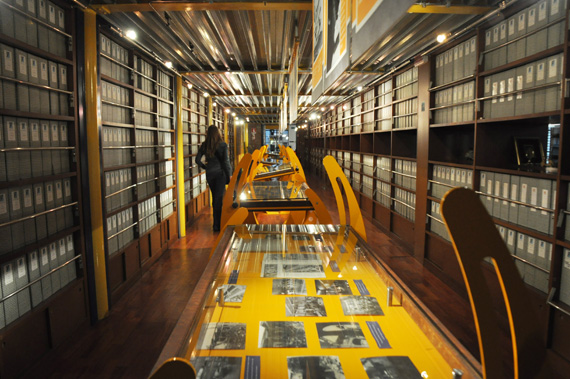