If you’re a geek worthy of her name, anywhere you go you’ll be looking for the classiest library in the region. On a recent trip to the beach town of Cesenatico, a little research (not in books, though) led me to nearby Cesena where the 15th century Biblioteca Malatestiana is perfectly preserved. From 2005, it is listed in the register of the UNESCO Memory of the World Programme which protects valuable archival and library holdings in a last ditch effort to encourage permanence in a world dominated by digital content. 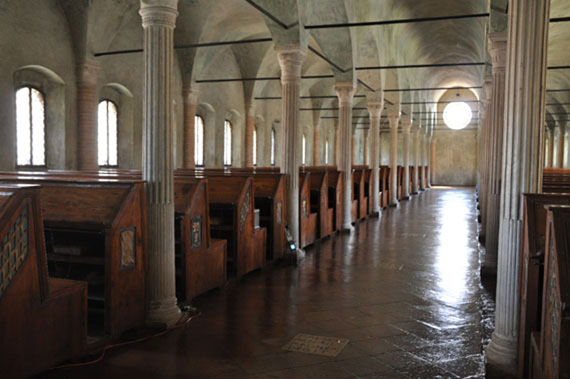 Why was I  so excited to to go the Maltesta Library? Well, wouldn’t you be if you were let inside a totally intact library from the mid Cinquecento that contains its incatenati – chained books – still in place in the original catalogue system? A design by a pupil of L.B. Alberti? A display of manuscripts in humanist text and chorals with beautiful illumination? 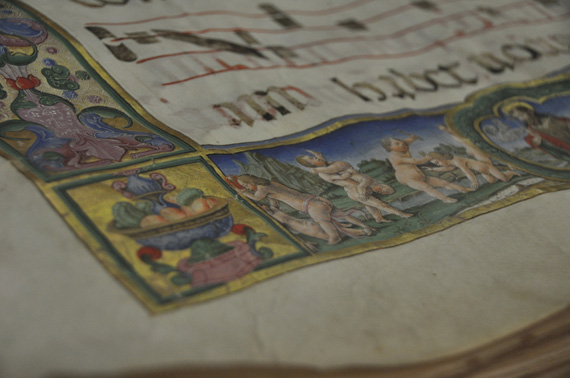 Putti in the illumination of a MS from the 1480s

Visitors are allowed into two areas, led by a guide. The first is the Biblioteca Antica, a space that houses collections later than the 15th century nucleus, but still of great value and interest. Numerous manuscripts and early printed books are open in display cases, including books and maps of local interest and illuminated chorals. It also contains the smallest printed book in the world. 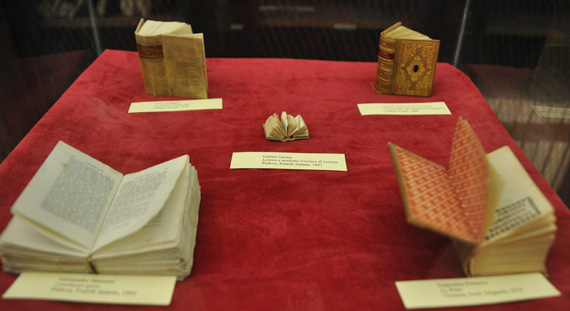 Smallest book in the world 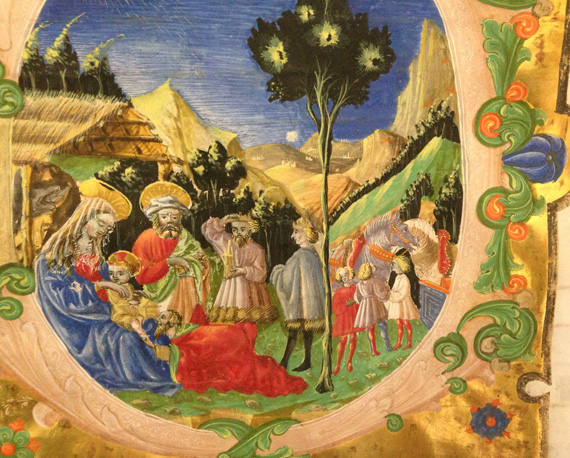 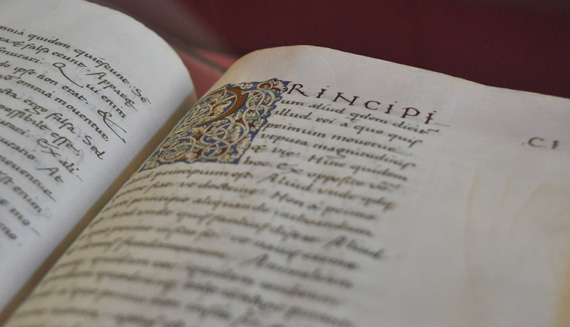 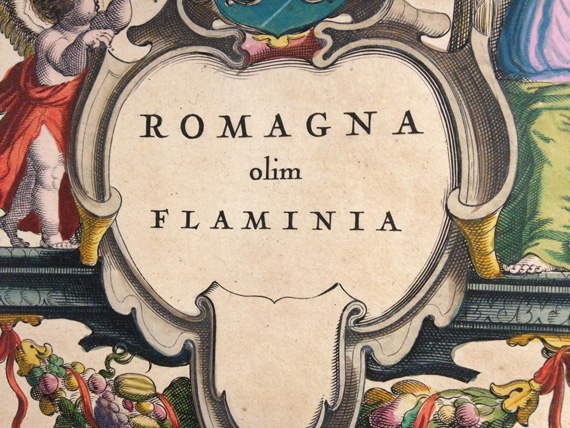 The Libraria Domini is the original reading room, modeled on the San Marco Library in Florence (1444) and constructed by Matteo Nuti for his patron Malatesta Novella, who gave it to the city of Cesena. 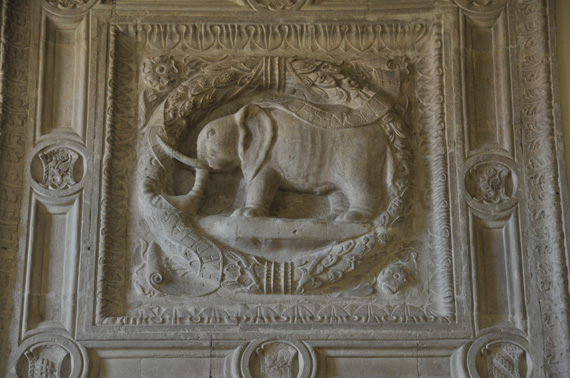 The entrance to the library is a marble doorway topped by the elephant emblem of the Malatesta family, whose motto is “Elephas Indus culices non timet” – the Indian elephant is not afraid of mosquitos – very brave of them since they lived in a rather mosquito infested inland area, although they meant it metaphorically. 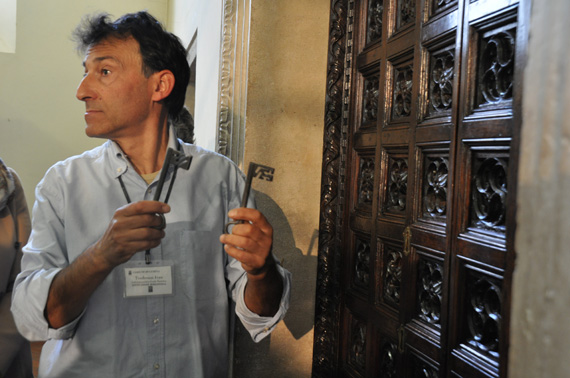 The door is original (s.d. Cristoforo da San Giovanni, 1454), as is its lock system, which required two keys to open it, symbolizing the ruler and his city. 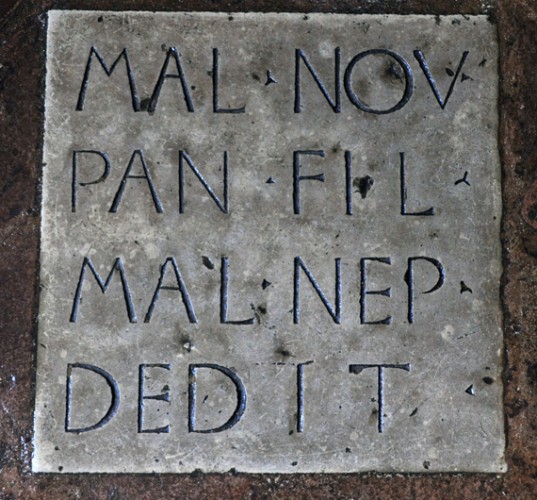 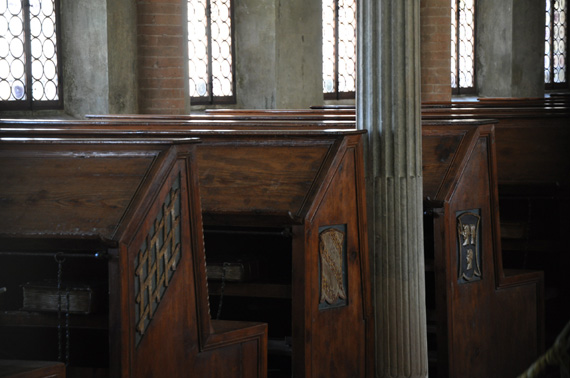 The reading room is composed of two rows of plutei (benches) and a central aisle topped by a long barrel vault, while each of the side bays is contained under a sail vault. The greenish hue of the ceiling is not mold but what remains of the original pigment. With a green ceiling, red terracotta floor and good white light, you might think the library was a gigantic caprese or Italian flag, but these were also the colours of the Malatesta family. 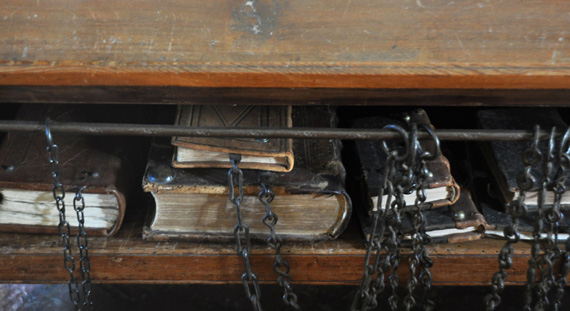 For book lovers, knowing that the library still contains its 343 manuscripts chained into place within the original cataloguing system is rather exciting. Here, like in the Laurentian Library in Florence, readers went to sit at the book’s location, which was located according to row number (left or right) plus seat location. The books came from the conventual library of San Francesco (about 150 codices), as well as 120 manuscripts commissioned by the patron to one very active scribe. The collection also includes some Greek and Hebrew works and some medical and scientific books donated by the Malatesta’s doctor, Giovanni di Marco. 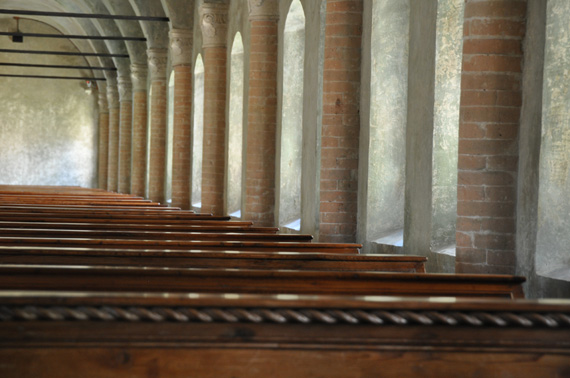 The library was technically open to the public, daily during daylight hours – no lamps were allowed (assumedly for safety reasons), so the library was constructed with excellent natural lighting in mind, on the first floor of the building and with large windows. Although generally ‘the public’ meant men, we know that Novello’s wife was Violante Montefeltro, and being from the court of Urbino in which women played an important role in intellectual court life (as recounted in Castiglione’s The Courtier), we can imagine that she and perhaps her ladies in waiting might have had access to some of these books.

The main architectural and historical element to visit here is the nucleus of this collection from the 15th century, but one nice thing about this library is that it has some more modern parts, and in fact is still active as a lending and reading library, with contemporary exhibits and a childrens’ area that make it not just a tourist attraction but a live place of culture.

My visit to Cesena was a side trip while staying in Cesenatico as a guest of the Grand Hotel Cesenatico and the Cesenatico Bella Vita Consortium, whom I thank for providing me with this opportunity.

Visits are by guided tour at set hours. You can reserve online or just show up.
Tickets 5€ per adult.